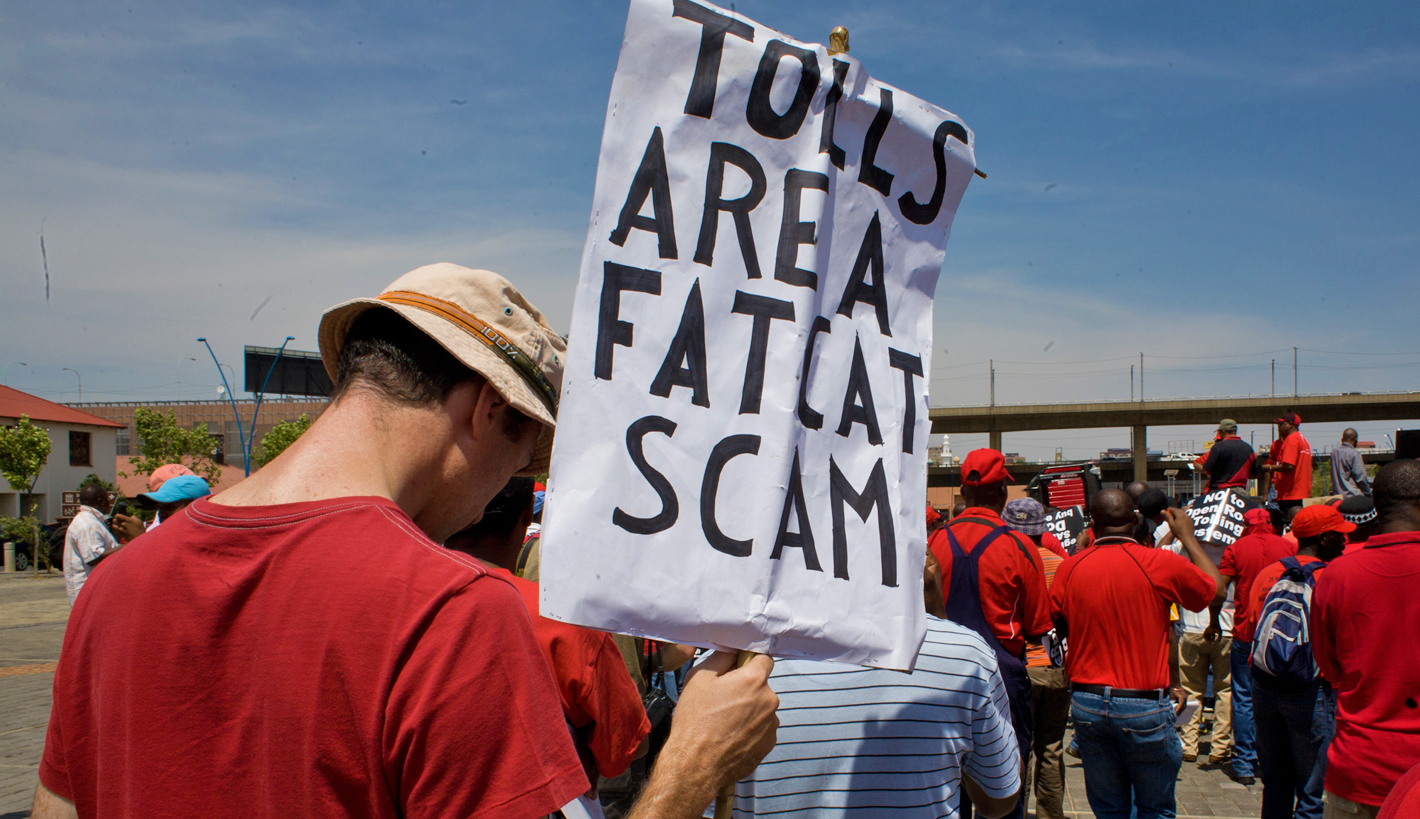 E-tolling has failed because the public never bought into the plan. C:fakepathetolls greg nicolson

Cosatu is on the streets, driving against e-tolls. As usual, its core members will be there without the support of those who claim to be concerned. Few people are acting on the bluster, with worrying signs for the future. By GREG NICOLSON.

The defining characteristic of tripartite alliance demonstrations is the songs. Members arrive to support their leaders, or a faction of leaders, and dutifully pay attention to the rhetoric. It can be divisive, sometimes militant, and usually bridges the divide between those in the halls of power and those by both the mundane and sensational issues confronting society. The engagement with the issues, however, is more subdued than that entrenched but odd practice of toyi-toying. To an outsider, it’s the singing, the marching, and the playful motions of physical intimidation that one remembers.

The issues that bring the ANC, the SACP and Cosatu to the streets should often concern all South Africans. Yet only a small proportion of insiders feel comfortable or are available to demonstrate. But what happens when we are faced with an issue that, improbably, crosses the cultural divide and concerns both those who supported the liberation movements and those who fought them or have skeptically accepted the new government while waiting for a visa to Australia or to see what happens with the exceptional country?

Tolling of freeways in Gauteng is such an issue. Unlike any other, the fragments of society have all spat scorn on the idea of tolling the province’s freeways. Some say we should have complained earlier. Others are bereft of options, asking how else will the government pay the debt incurred without ruining its credit rating. But the supporters of e-tolls are few, while its critics span a cross-section of society you’d find hard-pressed to find having a beer together.

On Thursday morning, a Cosatu-led demonstration will fan out across the province. Convoys of cars clog the highways in a drive slow against e-tolls. But if recent history is any indicator, the demonstration will consist of only Cosatu members. Despite the reported cost of e-tolls, at the expense of everyone but the rich, most of us affected will sit and watch it on the news.

Wayne Duvenage, head of the Opposition to Urban Tolling Alliance (Outa), is at his wits’ end over the public apathy on the issue. Coming from a career in business, he has had a crash course in fighting against what he believes violates the public. “It’s clear that we pay a lot of lip service, we make a lot of noise, but it’s clear we don’t walk the talk,” he told Daily Maverick. “We have this society that tends to sit back and say, ‘Someone else will do it.’”

Unlike most issues, critics of e-tolls have multiple avenues to act on their anger. You could have joined the woeful attendance of Cosatu’s march in Johannesburg last week. You could have sat in your car, listening to Justin Bieber if struggle tunes aren’t your thing, and blocked the freeways today. Or, you could donate money to Outa’s court case against e-tolls. Around 80% of the R7 million its raised in five months has come from 30 companies, with the rest coming from about 2,000 individuals. Before Outa even considers celebrating if it wins and the government appeal that would certainly come, it still needs R3.5 million for its current court action.

Duvenage believes the funding will come, but compared to the drenching public outcry, money has come in a trickle. The Cosatu march, both last week and in March, featured its standard stock of demonstrators. And while today’s highway blockage will only take a dozen cars to be effective (Cosatu hopes for 100 from each departing location – Johannesburg, Ekurhuleni and Pretoria) chances are that no one from outside the movement will be involved.

Why is society so apathetic on an issue with such wide condemnation? Part of the answer lies in the broader context of e-tolls. Having to pay to use Gauteng’s highways is an issue that crosses boundaries, but the anger has boiled up over years. Society is unsatisfied that the ANC government has not developed low-income areas fast enough, is fraying nerves with its billing crisis, cannot educate its youth or provide jobs. It’s tired of the stream of wasteful expenditure, unlawful expenditure and corruption. The distrust is palpable and is reaching breaking point. The e-tolls saga represents that anger.

But cumulated dissatisfaction represented in a single issue does not promote activity. Some people have no idea how we would be affected by e-tolls or misinterpret the issue but use it to support bias against the ANC. The struggle to come to terms with the new government leads to a series of snubs:

It latches onto the key issues but can never address, let alone act on them.

There maybe another reason we don’t toyi-toyi, donate, or drive to challenge the issues that concern us. Duvenage believes that e-tolls will last six months, maximum. He says the system cannot fight against the possibility that people don’t pay their e-tolls en masse. If they are finally introduced, there is the real possibility that many of the million-odd people who use the freeways decide not to pay. In that case, the system will eventually collapse under its own weight.

Refusing to pay is another form of activism. It’s not as confronting as a march or a court case, but it may get the desired result in the end.

The problem is that the public cannot just wait and see. E-tolls may be still be halted if activism is left to a few concerned individuals and the established centres of demonstration, but there are countless issues across society that the public must act on. These issues do not always bring people together, but they are just as important: education, corruption, utility prices, health, and the encroaching powers of the state. We can, of course, talk about it, which appears to be a preferred mode for now. But as long as apathy reigns and the general population passes the buck, nothing will be solved. DM