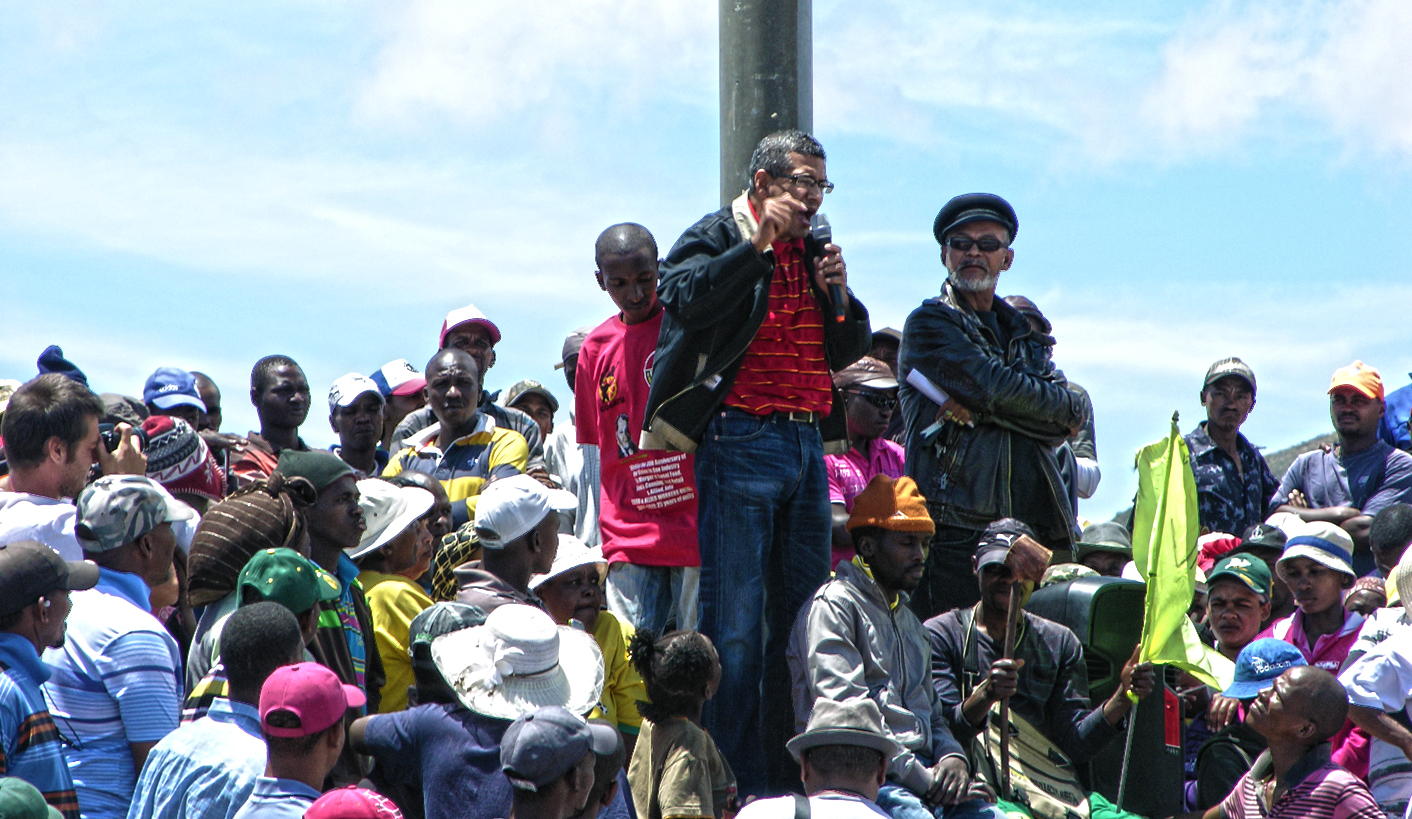 December the 4th marked the short-lived resumption of the Western Cape farmworkers’ uprising, after a 10-day break for negotiations which have seemingly come to nothing. Workers across the Boland went back on strike, but only for day, as it appears the strike has been called off by all “stakeholders”. Yet it is clear that it was COSATU's Western Cape branch, chaired by Tony Ehrenreich, that called off the strike without receiving a mandate from most stakeholders or the workers themselves. By BENJAMIN FOGEL.

The second round of the strike has been a disaster – a major display of weakness that could potentially set back the farmworkers’ struggle for years. Disempowering the emergent political agency that has resulted from the unified action of farmworkers, wage negotiations are now to be conducted by unions on a farm-by-farm basis, while also including the unrealistic temptation of a profit-sharing scheme.

If the power and agency of the strikers arose from the actions of the most brutalised and exploited segment of South Africa’s working class, the end of the strike marks a continuation of the same backroom union politics that brought about the wildcat strikes on the mines of the North West. Speaking with farmworkers across the Boland on Tuesday, both those who participated in the strike and others who returned to work made it clear that there was no consensus on the direction the strike should take or a understanding between those appointed to negotiate in the name of the workers and the workers themselves.

In the Robertson area, the majority of non-union workers returned to their jobs, while members of unions such as CSAAWU (Commercial Stevedoring, Agricultural and Allies Workers Union) continued the strike at the Vink Rivier, Voorspoed, Wonderfontein and the La Collione farms. We found a group of strikers hunkering down opposite the gas station near the entrance to Robertson from the Worcester side. These workers had apparently been driven from their picket line at the La Collione farm by the police; they claimed that the farmer only pays them R65 a day. Three workers claimed to have been hit by police rubber bullets. When questioned, police redirected our questions to a superior, who, clutching his weapon, avoided giving us any answers to our queries about the strike. Photo: Some of the strikers were displaying rubber bullet wounds from 15 November violent unrests.

Wesley Booison, a CSAAWU shop steward interviewed at the Voorspoed farm told us that the workers had been organised at the farm for three years now, despite the hostility of the farm-owner and the meager R69 per day wage they received. A week ago, this same farmer had charges laid against him at the Robertson police station for allegedly threatening to shoot his workers if they damaged his property. Workers picketing at the farm clutched signs demanding R150 per day and claiming that “R150 was only a start” – something we heard on Sunday at a rally in Ashton. It is interesting that the most determined and politically aware workers we encountered in the region were affiliated to the small independent CSAAWU union.

An hour’s drive away, De Doorns once again appeared to be both the core of the strike and the key political battle for whatever capital can be extracted from the farmworkers strike. As local politicians and newly discovered community leaders struggle for legitimacy, national politicians, perennial camp followers of the struggle and union leaders seeking to rapidly recruit new members. The strike’s energy seemed to have dwindled somewhat by noon as workers, fearing the loss of money needed for Christmas, returned to their farms. Still, according to locals, around 6,000 workers remain on strike. Those who did return to work were permanent workers rather than those employed seasonally.

As in the Roberston-Ashton area, in De Doorns it was clear that the majority of workers on strike were not ready to settle for anything less than R150 per day, and that there was no clear process of accountability between workers and their “representatives” at the negotiating table.

Assembled at the De Doorns stadium were over a thousand workers. Most were waiting in the December heat for something to happen while their compatriots had the good sense to stay at home. A small group entertained themselves through an impromptu toyi-toyi and song session, while carrying flags provided by Mario Wanza and a few of his new UDF comrades.

Yet the most shocking occurrence witnessed at the De Doorns rally was a call made by one Sandile Kenny in full view of union leaders, for PASSOP director Braam Hanekom to be killed on his return to the community.

This call was made after Sandile led the crowd in a decidedly weak rendition of Kill the Boer, and at a podium shared with the controversial former unionist, Nosey Pieterson, who now heads the Black Association of Wine and Spirit Industry as well as BAWUSA. Tony Ehrenreich of COSATU in the Western Cape arrived a bit later; his speech, delivered at about noon, did not explicitly call for an end to the strike or even engage with that possibility. Rather, it contained two key themes:

b) a call for workers to place their trust in the power and wisdom of their representatives at the negotiating table who had the political connections necessary to call in the appropriate cabinet ministers and to meet with the farmer’s representatives.

Both of these themes have emerged prominently in today’s deal, which may put an end to the strike and looks set to empower COSATU affiliated unions in future negotiations at the expense of independent unions like CSAAWU.

While it is clear that division among workers on the strike has been growing and many thought it was more prudent to return to work than take the risk of going back on an indefinite strike, the deal was imposed on the farmworkers after an unaccountable process conducted in the name of democracy. It further hampers the growth of a new democratic and active political culture among workers in South Africa.

Instead of attempting to build a democratic trade union movement, COSATU affiliates have been more concerned with politicking and increasing their clout in rural areas. In the end the deal – unlike in Marikana – removed actual farmworkers from the negotiating table or any other public platform. This risks further perpetuation of the system of degradation and exploitation that is endemic in the agricultural industry. In the area where real problems exist and sobering differences are there for all to see, it solved pretty much nothing. DM