Ms Clinton and Mr Lieberman: Next US president 'hearts'... 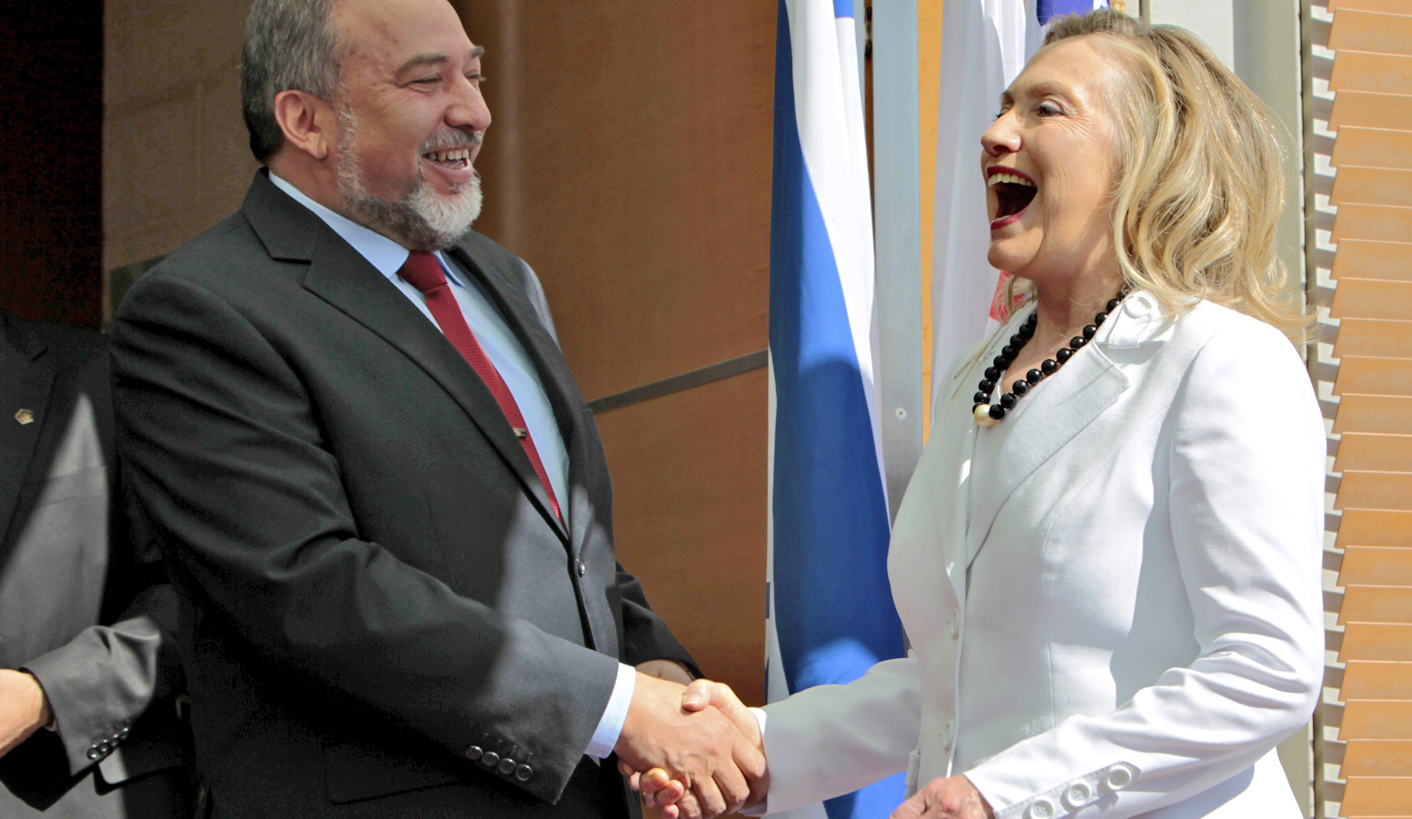 A bizarre thing happened in Washington DC on the weekend. It seems that at a function to honour the outgoing secretary of state Hillary Clinton, Israel’s foreign minister Avigdor Lieberman was let off his leash. How far right of centre will the US allow Israel to go before saying something? Pretty far, it would appear. By KEVIN BLOOM.

Last December, Israeli foreign minister and leader of the right-wing political party Yisrael Beiteinu (Israel is our home”) met with Russia’s then prime minister Vladimir Putin in Moscow. It was by all accounts a cosy rendezvous, aided in particular by the fact that Lieberman had characterised the recent Russian elections as “free and fair”. In the United States, which considered those elections anything but, the news wasn’t treated with much surprise – “of course” Lieberman rose to Putin’s defence, noted Jeffrey Goldberg in The Atlantic magazine.

It’s no secret that Israel’s Moldovan-born foreign minister literally speaks the same language as Putin, who after the disputed Russian elections was reinstated as his country’s president. Neither is it much of a secret that they seem to speak the same metaphorical language – their mutual penchant for despotism is so obvious to the Israeli Left that in late October 2012, after the merger between Prime Minister Benjamin Netanyahu’s Likud Party and Yisrael Beiteinu had been announced, the opposition party Meretz launched a social media campaign calling Lieberman “the Israeli Putin”.

The initiative was based on a premise voiced by Meretz chairwoman Zahava Gal-On, who said that the merger had changed the political conversation ahead of the Israeli elections. “The answer to the anti-democratic Right isn’t a feeble Centrist movement, but a Left that is committed to democracy and human rights,” she said.

Strangely, the newspaper of the fast-diminishing Left seemed to disagree with Gal-On. Writing in Ha’aretz, Ari Shavit was at pains to point out that Lieberman is nowhere near the Russian’s league: “Putin is an aggressive president who in his own way reunified a disintegrating state and turned it into a world power. Lieberman is an unsuccessful foreign minister who is partly boycotted in the United States and Europe and responsible for the fact that Israel is seen in the West as a country that has lost its humanity.”

Had Shavit known what would happen on Friday 30 November in Washington DC, he might not have been so quick to voice the opinion. Because in a stark break with precedent – for fear of embarrassment, Lieberman is almost never allowed to engage publicly with the US – the foreign minister took centre-stage at a function designed to praise the personality and accomplishments of one Hillary Clinton.

The setting was the Saban Forum, an annual event organised by Israeli-American media and entertainment mogul Haim Saban. For the past nine years, the forum has alternated between Jerusalem and the US capital, and its focus has always been events in the Middle East. With very few Arabs in attendance but a generous smattering of Israeli and Jewish American influence peddlers, it is tacitly accepted that the event speaks to the concerns and agendas of the Jewish American lobby.

And how excited the most hardline of them must have been when they learned that Lieberman would be Clinton’s Friday night pre-dinner act. While the more moderate Israeli defence minister Ehud Barak remained in his seat, Lieberman, well known for his racist tirades against Arabs, basked under the spotlight and made off-colour jokes. “I agree with you: I am a very bad guy and we have a very right, radical government,” Lieberman said to his interlocutor, National Public Radio’s Robert Siegel.

Apparently, the guffawing from the audience was mild but appreciative, and Siegel – in other circumstances a tough interviewer – earned his fee by forgetting to ask difficult questions. “Settlements are not an obstacle to peace,” said Lieberman, who lives in one. “The opposite is true.” Smugly aware that he wouldn’t get grilled on such disingenuousness, and clearly loving the fact that his doozies were guaranteed to be scarfed down like Long Island oysters, he went further. “Israel has never interfered in the internal domestic politics of any country.”

For Palestine, you see, is not a country. Just ask the Americans, who were one of only nine nations to vote against the de facto recognition of a Palestinian state at the United Nations last week, and who, along with Israel, threatened to punish the Palestinian Authority for tabling the motion by withholding funds for the West Bank government.

“The first mistake was when Moses brought us to the Middle East instead of Benelux,” said Lieberman, paraphrasing a joke told at Shabbat tables since… well, since Moses finally got his people to the Promised Land (which, it turned out, was just another desert).

And then, after dinner, it was the turn of the outgoing secretary of state herself, Hillary Rodham Clinton. But first a short film, in which soundbites from Israeli politicians – including Benjamin Netanyahu, Ehud Barak, and Tzipi Livni – competed in the adulation stakes with Americans like John Kerry. Tony Blair, making a not-so-subtle prediction about 2016, said, “I just have an instinct that the best is yet to come.”

According to New Yorker editor David Remnick, who was present and accounted for, this was pretty much the theme of the evening, whispered in conversations at tables throughout the hall: was Clinton resigning from the Obama administration to concentrate on the 2016 presidential race? Everyone was in agreement, noted Remnick – she’s running!

“All kinds of circumstances could intervene between now and 2016 to derail her,” Remnick continued, “but Hillary’s numbers are enormous, her ambition equal to her capacities, and she was in high political gear. She proceeded to give a serious, sturdy speech of a certain kind; if not quite AIPAC-ready, it was a speech extremely careful not to ruffle anyone’s delicate feelings or becloud her last days as secretary of state. She asked of Israel only that it show more ‘generosity’ to the Palestinians. She was quick to point out that, both in the recent Gaza crisis and then in the UN vote on Palestine’s non-member observer status, ‘we had Israel’s back’. She pointed out that the US had ‘underwritten’ Iron Dome, the missile-defence programme that protected Israeli territory from rockets fired from Gaza.”

Clinton didn’t say anything about Lieberman, of course, but then she didn’t have to. By allowing Israel’s Putin to speak before her, she said everything. And given that the Israelis had repaid the US by doing what the Obama administration wanted it to do least –announcing, in the wake of Operation Pillar of Defence, an expansion of settlements in the West Bank – it was a diplomatic performance worthy of a queen. DM