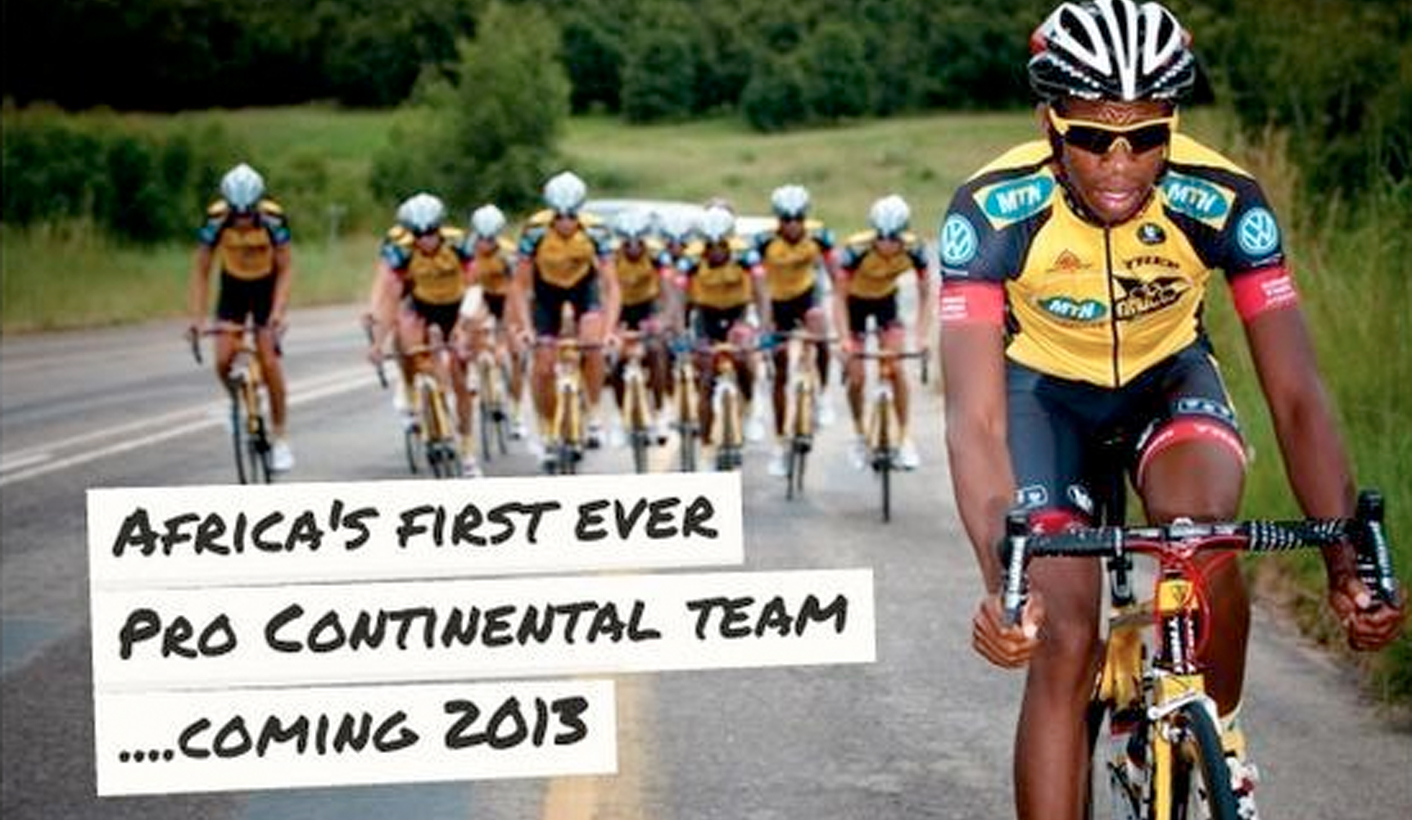 This may come as a surprise to the average reader: cycling fans still exist. They are, for the most part, physically fit (many are cyclists themselves), but the shape of their souls is a horrible thing to behold. Cynical? Please! They passed cynical back in the Ulrich era. So forgive them for harrumphing over a piece of genuinely good news – an African team just secured Professional Continental team status, a first for the continent. We’re going to Europe, insists RICHARD POPLAK. But not before a group called Change Cycling Now takes care of some housekeeping.

Depending on how you view the world through your polarised Oakleys, this is a big week for professional cycling. In London, there unfolds the inaugural meeting of a lobby group called Change Cycling Now, a gathering of vehement revolutionaries, led by the likes of Jonathan Vaughtners (ex-Lance lieutenant, ex-juicer extraordinaire turned passionate anti-doper, and head of Garmin-Sharp), Dr Michael Ashenden (anti-doping expert who wields his syringe for good), Paul Kimmage (muckraking journo and thorn in the side of cycling’s Don Corleone, Union Cycliste Internationale head Pat McQuaid), and Greg Lemond, the only American ever to win the Tour de France (see what I did there?)

According to VeloNation, Lemond, who was the first of the sport’s deities to publically denounce Lance and the systemic doping culture he represented, said, “Myself and [former teammate and ex-Cofidis team manager] Eric Boyer called for independent doping back in 2008. Amaury Sports Organisation [ASO, the organiser of the Tour de France] were all for it, but unfortunately, the UCI was not.

“There has to be transparency provided by a third party, no question. The UCI should be focused on promoting the sport, not unilaterally policing it. Doping, its operation and its sanctions should be the responsibility of a body that is clearly outside of UCI jurisdiction and there has to be a system that looks much more closely at the source of doping and supply rather than just on those who dope. At the moment, there is no incentive for riders to confess and reveal what’s going on because it’s only them who’re being punished.”

In other words, Lemond and company want the watchmen watched, and they want the accountability to stretch all the way through the system. It’s all well and good banning a 22-year-old domestique for juicing, but what about the team that turned a blind eye, the trainers that advised him, and the peers that urged him on? Change Cycling Now intends to smash a syndicate. It starts with the UCI, and its inexcusable impulse to act as legislator, regulator and judiciary – roles that it has miserably failed at individually and collectively.

The UCI functions as one of international sport’s lousiest organisational bodies, mostly because it behaves like Stalin without the cute mustache. Unlike most other governing bodies, the UCI does not sell franchises, but encourages sponsors to assemble teams based on points earned by individual cyclists over the course of a season. Cynically applied, you buy a UCI berth by acquiring points, not cyclists. At its worst, it creates a culture of carpetbaggers who must kill themselves in races in order to secure employment for the following year. No bad years, like a football star. Perform, or wear a paper hat and scoop fries into a combo meal.

The system creates a pincer grip of corruption – in the (very recent) past, teams encouraged malfeasance in order to garner points, and cyclists were only too happy to comply in order to earn their meagre pay cheques. Sadness all round –until, of course, the system hands a fan a little Christmas gift. Obscure backwaters like Spain’s Basque Country have had professional continental teams. Now, Africa has one, too.

So, allow me to introduce you to a genuine African first: MTN-Qhubeka, a team led and sponsored by Africans, fielding a majority African team, now about to take the leap into the big leagues. Said team principal Doug Ryder, through a press release, “This is an exciting development for African cycling that has been years in the making. We’ve created a professional environment for riders from the continent of Africa.

“They have access to the best coaching and equipment in the world and they receive the opportunity to showcase their talent against the biggest teams in world cycling. Our dream remains getting to the Tour de France, Giro d’Italia and developing an African world champion. This news is a step in the right direction.”

Professional continental status does not mean that MTN-Qhubeka will be battling it out in the Grand Tours – that requires WorldTour (née ProTeam) status, something MTN is clearly working towards. (Think of professional continental status as First Division to the Premier League.) But this is a start, and as much as one can blame the UCI for the state of everything terrible on the planet, it has nurtured and supported African cycling for years. This, then, is the pay-off.

Doug Ryder has shown exceptional acumen in cherry-picking the best young African talent peddling through the UCI Africa Tour, which includes events like the Tour of Eritrea, the Tour de Faso and the locally based Mzanzi Tour. And although the team lost its star-in-the-making, Reinhardt Janse van Rensberg, to Netherlands-based Argos-Shimano, the plan is to get him to Europe on a permanent basis, and to bring him back when he is ready to lead the team to some serious glory.

Now, a quick glance at MTN’s roster will allow that not all the cyclists are African. Ryder has imported six European ringers, all of whom, despite their youth, have years of experience in the big leagues. They will undoubtedly make an impact on the careers of the young Africans who they are now mentoring. Ignatas Konovalovas, of Lithuania, and Sergio Pardilla, of Spain, leave the Spanish Movistar Team, while the Germans Gerald Ciolek and Andreas Stauff also say goodbye to European outfits. None of these young men are stars, and their results speak to solid, if unspectacular, journeyman careers. But they will help, because they know what it takes to ride as hardened professionals.

“As UCI president,” said Pat McQuaid, in a welcome note, “I am extremely pleased to see this development. Having invested a lot of time and effort in recent years on developing our sport on the African continent, the UCI is certain that we will see in the coming years African cyclists compete, and compete successfully, in the major world events. Our thanks to all those who have made this possible and good luck.”

The good luck, however, should probably be directed at McQuaid. For all his undeniable assistance in making a team like MTN possible, he is currently fighting for his professional life, to say nothing of the existential battle his union is locked in. Cycling professionals like Greg Lemond and his Change Cycling Now companions will stop at nothing to make sure that the stain of McQuaid, and his grimy predecessor Hein Verbruggen (currently honorary president), are removed from their posts. Greg Lemond as UCI president is no one’s idea of a bad deal. Let’s just hope that he, or whoever ends up kicking McQuaid and Verbruggen to the curb, continue to support African cycling.

We have a planet’s ass to kick, after all. DM