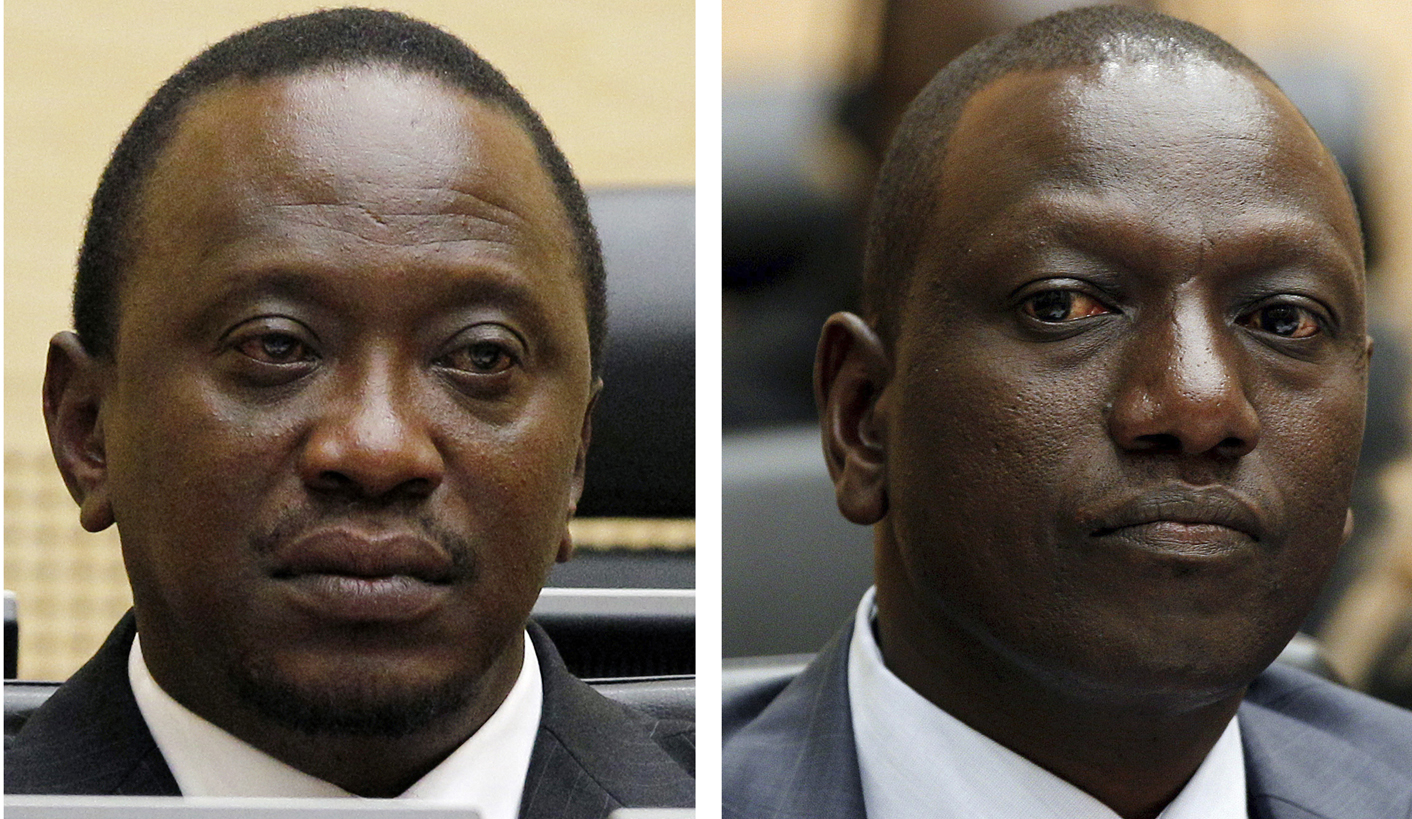 Two of Kenya’s most prominent politicians, Uhuru Kenyatta and William Ruto, took some time off from their legal issues (they are both on trial for crimes against humanity) to announce a grand new political alliance. Now that it serves their purpose, their once fatal differences don’t seem to matter so much. By SIMON ALLISON.

The brazen cynicism of the spectacle took my breath away. There, in Nakuru, the Kenyan city where scores of people died in pointless political violence in 2007-2008, stood two of the men allegedly responsible for it happening: Uhuru Kenyatta and William Ruto, both stalwarts of the Kenyan political establishment, both key figures in next year’s presidential elections, and both on trial at the International Criminal Court for crimes against humanity.

Thousands of Kenyans cheered the two men on as they announced that they had forgotten their differences and buried the hatchet. Instead, for the good of national reconciliation (they said) and their own careers (they didn’t say), they would combine forces to compete together in the upcoming polls. If successful, Kenyatta would take the top job and Ruto would serve as deputy, while cabinet and parliamentary positions would be split evenly.

“Our work is to preach peace, and make sure there is no blood spilt again,” said Kenyatta, deadpan.

“The journey to unite the country has started,” added Ruto, with no apparent trace of irony. “We have the leadership that can bring Kenyans together.”

To celebrate this marriage of convenience, the two men danced on stage to wild applause from supporters whose memory must be failing them. To the rest of us, who cannot forget the role that Kenyatta and Ruto played in dividing their country, and in inciting the raw, base emotions which set it alight in that gruesome period after the last elections, the spectacle was unworthy of adulation. The official death toll of Kenya’s post-election violence rests at 1,133, with 3,561 injured. Hundreds of thousands of people were displaced. Nakuru was the centre of some of the worst violence, with the city having to bury dozens of bodies. As the two politicians danced, it felt like they were dancing on the victims’ graves.

It’s worth taking a few moments to remember why all those people died, and the role played by Kenyatta and Ruto, among others. The stage was set in late 2007, when the results of a tightly fought election gave incumbent President Mwai Kibaki another term in office. Only just, though, and the main opposition – led by Raila Odinga, another establishment figure – wasn’t about to accept this quietly, especially given that parts of the vote were almost certainly rigged.

Resolution came in the form of a government of national unity, led by Kibaki but with Odinga as prime minister. Justice came in the form of a list of six names submitted to the International Criminal Court for investigation. Four of the people on the list have been formally charged with responsibility for crimes against humanity: Uhuru Kenyatta, William Ruto, Joshua arap Sang, and Francis Muthaura.

Here’s where it gets interesting: Kenyatta and Ruto, while both implicated, were on different sides in 2008-2009. Kenyatta, as befits the son of Kenya’s founding father Jomo Kenyatta, was protecting President Kibaki and the status quo. Ruto, meanwhile, was Odinga’s main attack dog, doing the dirty work while his principal kept his hands clean.

There was also an undeniable tribal element to all of this. Kibaki and Kenyatta are Kikuyu, traditionally Kenya’s most powerful and populous tribe. Odinga is Luo, and there has never been a Luo president. Ruto, meanwhile, is Kalenjin. The Kalenjin are a smaller but influential group, with the potential to be kingmakers in an election. In 2007, some political figures aligned with the Luo and Kalenjin banded together to fight off another Kikuyu term, which helps explain why the post-election violence assumed such an ugly ethnic character. This time round, with Odinga holding a healthy lead in the polls, perhaps the Luo leaders in question don’t feel they need to make any political sacrifices (such as cabinet positions) to guarantee Kalenjin support. Kenyatta, meanwhile, needs all the help he can get: hence this unsavoury deal with his former foe.

It’s no accident either, that both Kenyatta and Ruto have those ICC charges hanging over their heads. As one Kenyan columnist wryly observed, misery loves company. And an electoral victory would give their chances of escaping international justice a mighty boost: as the world has seen with Sudan and President Omar al-Bashir, prosecuting a sitting head of state (and his deputy, in the Kenyan case) is fraught with all kinds of sensitivities, most of which mitigate against an arrest and successful prosecution.

While their self-interest may be obvious, it’s nauseating to watch these two former enemies smile for the camera and dance for the crowd. If the bad blood can disappear so quickly, you wonder why exactly people had to die for it. “The violence wasn’t personal to either Mr Kenyatta or Mr Ruto,” explains Makau Mutua, chairman of Kenya’s Human Rights Commission. “The true objective wasn’t to attack people but to capture, or retain power. That’s how poor people are sacrificed by political elites every election cycle. It’s nothing personal. That’s how Mr Kenyatta and Mr Ruto can still come together to seek the highest office in the land.”

It’s nothing personal. As Kenyans ponder how to cast their vote in the next elections, they would do well to remember that. DM