Mangaung: ABZ shifts to fight for TOTZ (Things Other Than Zuma) 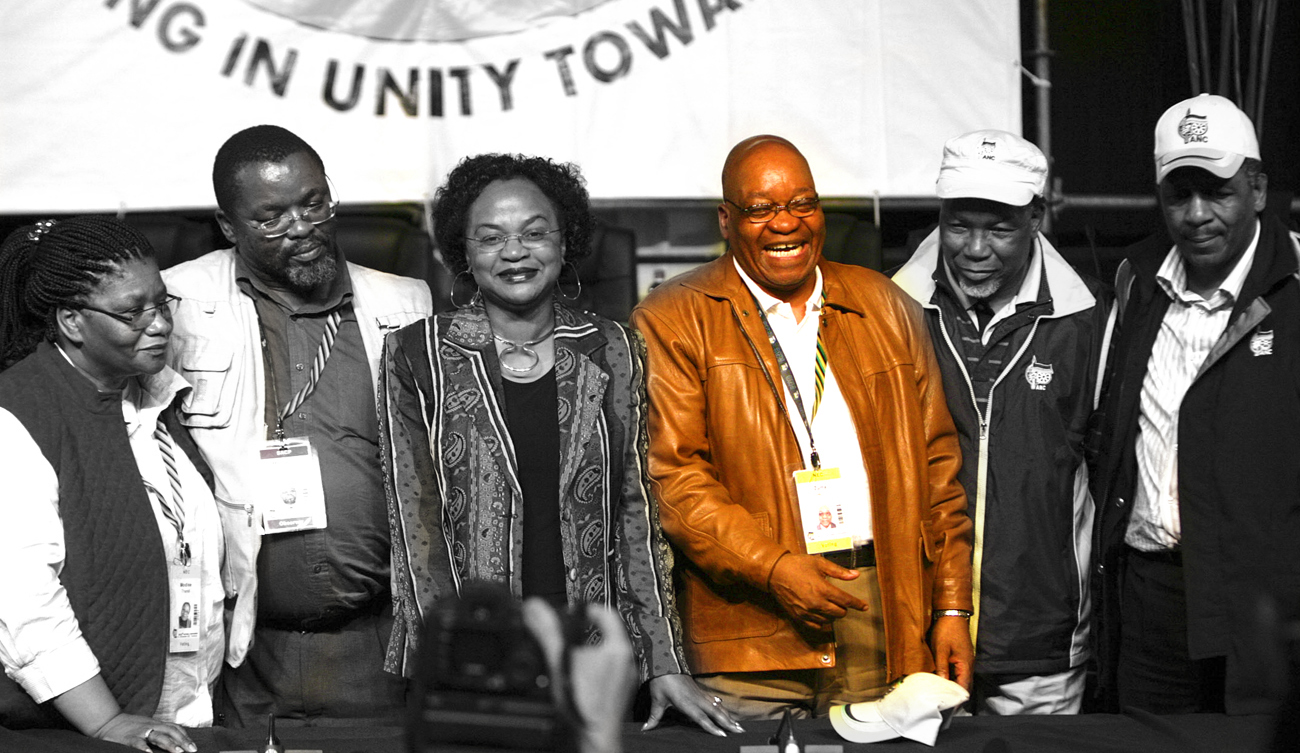 Many in the ruling party have resigned themselves to the fact that, based on the outcome of provincial nomination conferences, President Jacob Zuma is set to win another term as ANC leader in Mangaung. Those aligned to Zuma are now looking into ways to reinforce his leadership, knowing the pre-conference victory is nowhere near the end of his troubles. Those in the “Forces of Change” are looking at what can be salvaged from their failed bid to unseat the president. There are indicators that serious negotiations for trade-offs are coming. By RANJENI MUNUSAMY.

The biggest difference in the anti-Zuma faction now to the one that existed in the run-up to the ANC’s Polokwane conference five years ago is that two weeks before Mangaung, most leaders in the group known as the “forces of change” know that the game is up. In 2007, former President Thabo Mbeki and his supporters refused to read the signs coming out of the provincial nomination conferences that Jacob Zuma was about to defy the odds and win the battle for the ANC presidency.

Mbeki’s destiny could have turned out differently, had he and his advisors recognised that command of the ruling party was slipping away from them, and pulled out of the election battle. Mbeki might have incurred the wrath of some of his supporters, but he probably would have been left to serve out his second term as state president had he willingly surrendered leadership to Zuma before Polokwane, and there was a smooth transfer of power.

But Mbeki was convinced by his acolytes that the indicators from the provincial nomination conferences were misleading and that ANC delegates would vote differently from the general slant of their provinces once they were alone with their ballot papers in Polokwane. They were wrong. Delegates voted like they were expected to vote, and Zuma won the divisive battle.

Similar excuses and consolation stories are doing the rounds now among some people opposed to Zuma’s re-election. They claim that at Mangaung, there will be a greater number of delegates from KwaZulu-Natal voting for Deputy President Kgalema Motlanthe (assuming he stands against Zuma for the position of ANC president). They allege some of their supporters in KwaZulu-Natal and other Zuma strongholds voted in favour of the president at last week’s nominations conference because they were afraid there would be a witch-hunt if there were significant numbers voting against him. This could result in those suspected of being disloyal to Zuma not being allowed to attend the national conference.

In many provinces, there were also allegations of vote-rigging and fraud, and disputes over branch verification. These, coupled with factional battles, led to three provinces, Limpopo, the Western Cape and North West, missing the Friday night deadline for nominations for the Top Six and the national executive committee (NEC) to be elected at the Mangaung conference.

The NEC is holding a special meeting on Monday to consider the complaints and disputes over the nominations conferences and to decide whether to relax the rules to allow those who missed the deadline to still submit the names of their preferred candidates.

The votes from provinces which have already completed the nomination process show that Zuma has already crossed the threshold of support required to retain the presidency. Motlanthe has only been nominated by Gauteng and the ANC Youth League, and even with support in the three outstanding provinces, he is unlikely to make up the numbers to beat Zuma.

Those commiserating over their failed campaign are laying the blame squarely on Motlanthe and his refusal to pay the game with them. They believe that even with the numbers weighing in Zuma’s favour in his provincial strongholds, they could have swung the balance of power had Motlanthe been more visible and vocal and less reticent in the past few months. Nobody at any level of the ANC has managed to draw Motlanthe out of his shell, even in private, and this disorientated the campaign to replace Zuma immensely.

On Friday, after being nominated by the influential Gauteng province, Motlanthe told the Foreign Correspondents’ Association he was still “agonising” over whether to run against Zuma. His statements at that briefing were perhaps also an indicator that he is resigning himself to the fact that he might end up out of the Top Six of the ANC: “I believe I will always do my humble work at whatever level. I do not have to be in a position of leadership. I am not a professional politician,” Motlanthe said.

Businessman Cyril Ramaphosa has been nominated by Zuma-aligned structures for the position of ANC deputy president after Motlanthe refused to give them an assurance that he would not run for the presidency. In the early hours of Saturday morning, the Northern Cape threw Motlanthe a lifeline by nominating him for the position of deputy president. Up to this point, Motlanthe’s chances of remaining in the top six looked slim. But Ramaphosa’s votes for deputy president far outnumber Motlanthe’s, and his ability to retain his position now rests on either Ramaphosa declining nomination or a deal being struck to preserve the status quo.

While Motlanthe might be gearing himself for life away from the centre of political power, this is not the end of the fight for the forces of change. The battle is still on for the other four positions in the Top Six (Gwede Mantashe looks certain to retain his position of secretary-general) and the 60-member NEC. The three outstanding provinces will still be determined to have their nominations allowed for this reason.

The full collection of nominations from all nine provinces and the three leagues (youth, women and veterans) will allow the electoral commission to draw up a composite list of nominees for the ANC officials and NEC, but will also allow the various lobby groups to have a complete picture as a basis for negotiations.

Behind the scenes negotiations over NEC and policy positions took place even in the fractured Polokwane environment, and are bound to happen again now. There are already indications that approaches are being made at the level of provincial chairmen to discuss a ceasing of hostilities. It is also understood that informal discussions have been held with Mantashe to broker agreement between factions.

No particular issues have yet been raised, but some leaders of the change campaign say they might put the issue of the deputy presidency on the table as some of Zuma’s lobbyists are uncertain about Ramaphosa and are amenable to Motlanthe being retained. They are also hoping to reach agreement on other positions such as that of national treasurer, as everyone seems to want Mathews Phosa removed.

Negotiations over the NEC are expected to be a bun fight, though, particularly as 20 less positions are now available following a decision at the ANC’s June policy conference to reduce the number of seats from 80 to 60. The NEC list also has to be massaged to achieve 50-50 gender representation.

Policy positions may also feature in the negotiations, particularly economic policy shifts. However, since the policy conference, there appears to be general agreement on the issue of strategic nationalisation of key sectors of the economy, after the Zuma camp’s initial opposition to the idea.

The next few days are likely to open a series of backroom negotiations to secure trade-offs between the camps. This does not mean that the factional warfare in some of the provinces such as the North West, Eastern Cape and Limpopo might be settled, as many of these are proxy fights for deeper localised battles.

Now that victory for Zuma looks certain, the forces of change are having to shift focus to win ground on other issues. “Anything but Zuma” will have to change to “things other than Zuma” for them to leave Mangaung feeling that they still belong in the organisation and have some leverage in decision-making. For the Zuma camp, the last thing they need is angry, vengeful ANC members plotting the downfall of the president at a time when he is extremely vulnerable.

Zuma might have won the presidency, but Mangaung is not a done deal yet. DM