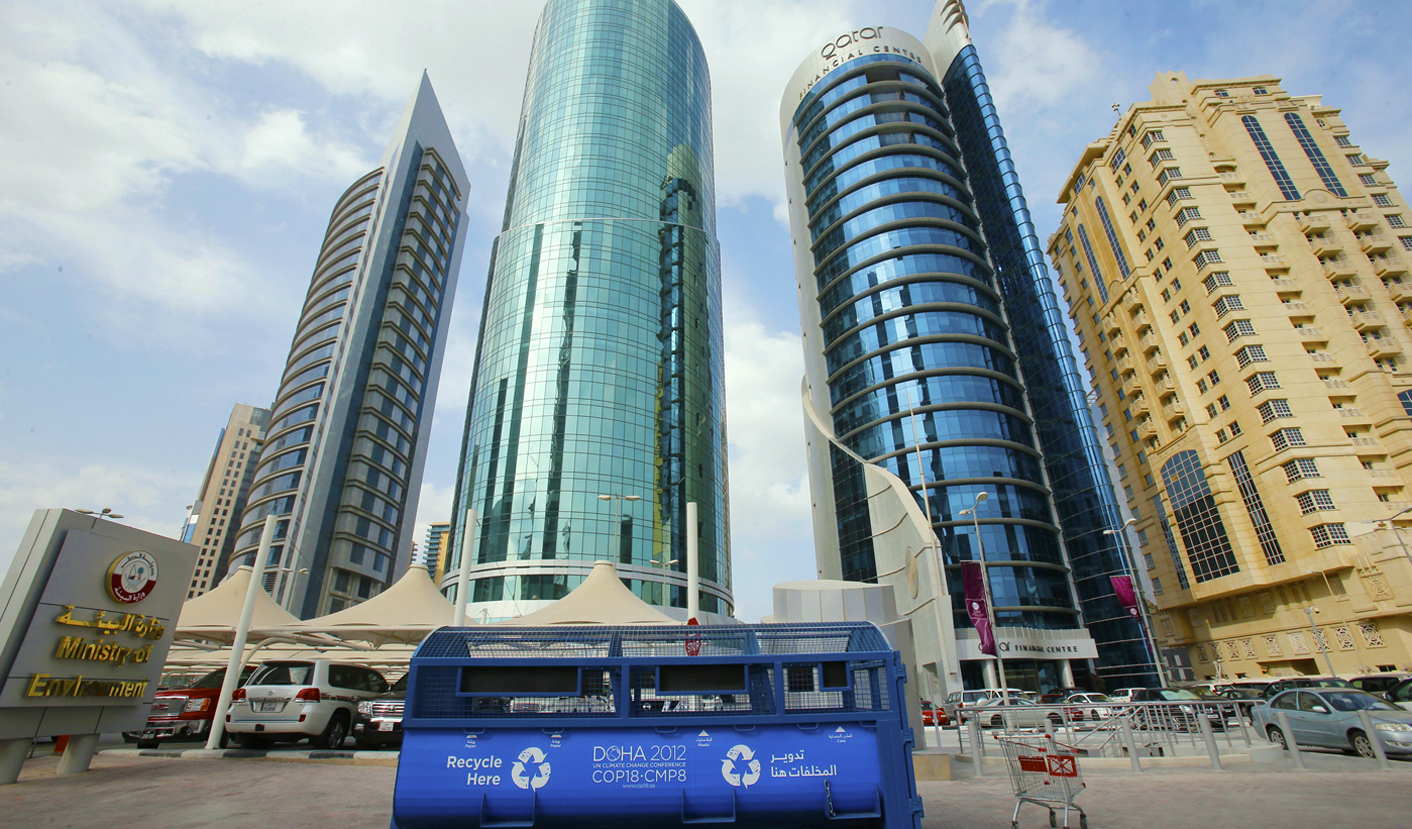 The Qatari capital, Doha, is playing host to the eighteenth Conference of the Parties, aka Cop18, this year. And after the last-ditch efforts to eke out some results at Cop17 in Durban last year, focus now falls on Doha to test – again – the efficacy of the United Nations Cop process. By KHADIJA PATEL.

Qatar is perhaps not the ideal setting for a conference designed to work out how exactly the world should adapt to climate change. Qatar is, after all, responsible for the world’s highest per capita carbon emissions. The United Nations must have a good taste for irony. Hosting the Cop in Doha, the Qatari capital, however, may still lend the negotiations some much-needed perspective. Despite all the talk about reducing carbon emissions, implementing carbon taxes and owning up to the problem, the slow pace of climate change negotiations means that there’s little immediate, real world impact from these conferences.

After two decades of talking heads arguing over climate change, there is still no global treaty stipulating cuts in greenhouse gas emissions. The best governments are now hoping for is to draw up an agreement in the next three years that would not come into force until 2020.

Last year, at Cop17 in Durban, two weeks of negotiations culminated in the “Durban Platform”, a commitment to continue talking and setting a deadline for drafting a potential treaty to 2015.

“The Durban Platform was a diplomatic success in keeping the talks on track, but not for the climate, where it did not achieve what was needed in terms of driving ambitions in reducing GHG emissions in addressing climate change,” argued Lesley Masters, a senior researcher at the Institute for Global Dialogue, based in Pretoria.

She says that while it is an achievement to have forced parties to agree to further talks in the hope of reaching an agreement by 2015 for implementation by 2020, the Durban Platform could be seen as adding yet another element to the already complex negotiations.

And the negotiations are a rather complex affair.

We learned in Durban last year that climate change does actually get politicians and diplomats hot under the collar. These negotiations are not for the faint of heart. There are frequent walkouts and slamming of doors as negotiators and their teams sit behind closed doors, arguing their way through texts laden with acronyms like CDM, the clean development mechanism that will see projects in poor countries that cut carbon, such as windfarms or solar panels, awarded credits for every tonne of carbon avoided.

Last year, the final outcome was further delayed when at 03:00AM, hours after the COP should already have been concluded, the European Union clashed furiously with China and India over the language determining the legal form of a potential new treaty in the negotiating text. The EU plans to bind all countries to emissions cuts threatened a collapse of the talks after India inserted the words “legal outcome” into the negotiating text at the last minute.

This round of talks in Doha is set to build on the last-ditch agreement in Durban.

“The focus will be on negotiating a deal for 2015 to come into force in 2020,” Masters said. “In addition focus will be on adaptation and finance and technology transfer for developing countries.”

Many of these issues are residual disagreements from previous rounds of negotiations.

“Unfortunately many of the issues that have been central at COP15 (Copenhagen), COP16 (Cancun) and COP 17 (Durban) will be carried over to Qatar,” Masters said, adding that Doha has also lent its name to the stalled talks by being called the “Doha Development Round”.  According to Masters, some of the niggling issues to be discussed in Doha include, “The future of the Kyoto Protocol and the principle of common but differentiated responsibilities and respective capabilities.”

The Kyoto Protocol was the first international agreement that defined cuts to global greenhouse gases. The Protocol was prompted by warnings from scientists that burning fossil fuels disrupts natural climate systems. Under its original terms, developed countries including the US and the EU would have to cut their emissions by an average of 5% by 2012, compared with 1990 levels. Developing countries were not obliged to make cuts, but were to benefit from cash from rich nations to help them go the way of the developed world.

Phase one of the agreement comes to an end next month, and only a handful of countries have signed on to phase two. And the international community has not been able to come up with a replacement.

“I think there will be continued pressure on the emerging economies of [Brazil, South Africa, India and China] to adopt mitigation targets, although they have already undertaken a number of voluntary initiatives to address their greenhouse gas emissions,” Masters said.

The actual focus of the Doha round of negotiations will be to just keep countries talking, renewing commitment to the process of the United Nations climate change negotiations processes.

“In contrast to the relatively internationally high profile political nature of the previous talks, I think that this one will be more focused on sorting out the details, but as the same problems remain there may only be a limited outcome in which parties agree to keep talking into 2013 and COP19,” Masters said.

Urgency is, of course, not a strong suit of climate change negotiations.

“Progress is too slow and the politics of climate change is undermining what the science is saying we need to be doing now,” Masters said. She points out that UN has announced that we are well on our way to over 3 degrees warming, rather than the 2 degrees that has been agreed internationally as that which we should be aiming for.

Expectations of an outcome from Doha are, however, modest. “Much of the work in moving the discussions forward will not take place at Doha, but rather at the meetings throughout the course of 2013 in securing the framework for reaching the agreement by 2015,” she said.

Last year, the International Energy Agency warned that the world has about five years left to significantly cut carbon emissions in order to prevent irreversible climate change. More recently, scientists have warned that on current form, the world will be in for between 4C and 6C of warming. Climate change negotiations have never been known for their speediness, however, and Doha is set to be no different. DM

Photo: A general view shows the logo of the 18th United Nations Convention on Climate Change next to the Ministry of Environment (C) in Doha November 27, 2012. REUTERS/Fadi Al-Assaad