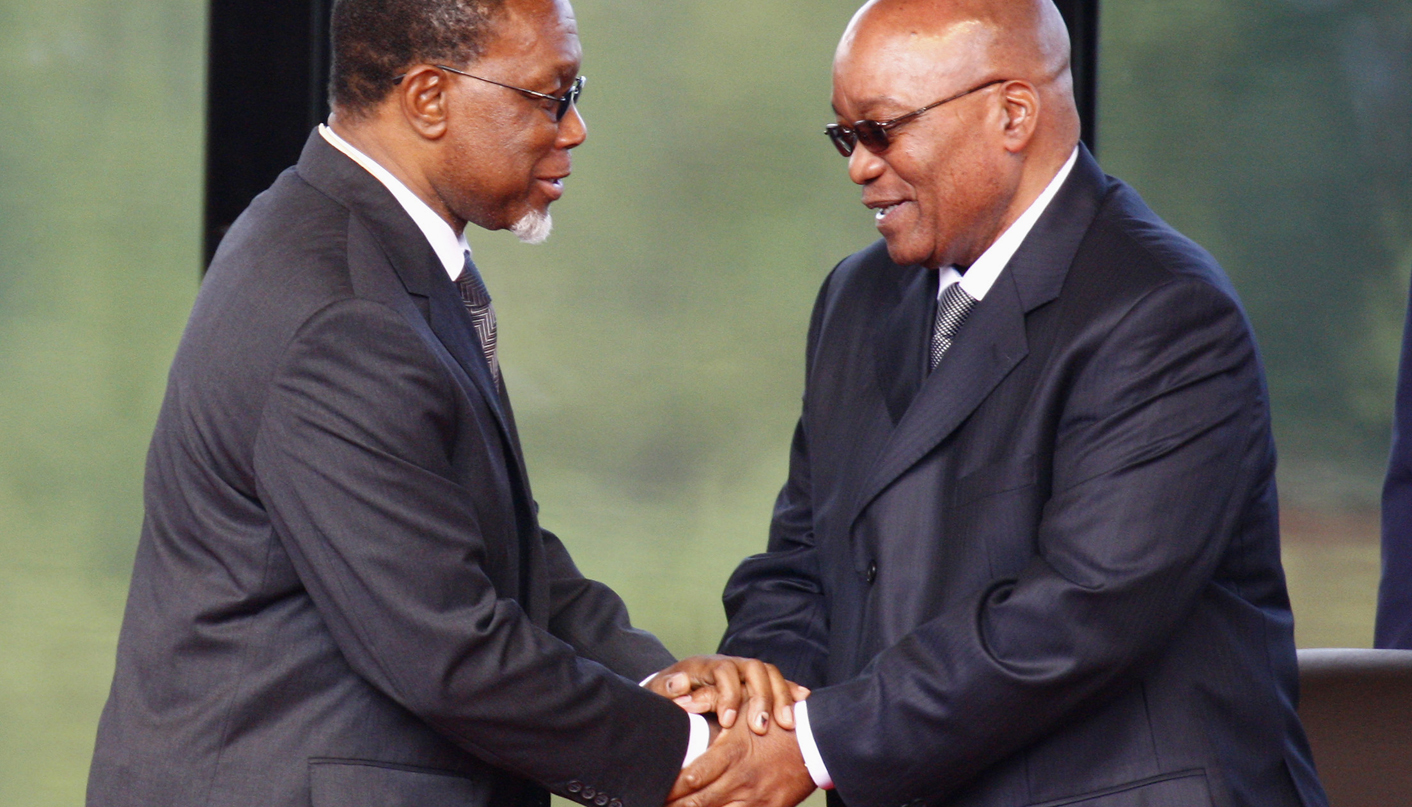 The ANC is now in the downhill stretch to Mangaung, and there are warning signs flashing about the future of Deputy President Kgalema Motlanthe. President Jacob Zuma’s camp has thrown down the gauntlet by excluding Motlanthe from their slate of top six candidates for the ANC leadership. This means that Motlanthe either has to wrestle the presidency from Zuma or face the prospect of holding no Top Six leadership post in the ANC (maybe an NEC position – if he is lucky). By RANJENI MUNUSAMY.

One province or league of the ANC had better nominate Kgalema Motlanthe for the position of deputy president of the ANC, or he is effectively going skydiving in Mangaung without a parachute. As the Daily Maverick revealed last month, Motlanthe’s strategy involves accepting candidacy for all the positions he is nominated for, thereby maintaining his position that he is not in any camp.

This means that he would force the top six positions to be voted on separately instead of together as a slate, and if he loses the presidency, he could then contest the deputy presidency. In terms of this strategy, Motlanthe can roll the dice on the presidency but still be able to retain his current position if Zuma beats him for the top job. But this strategy would only work if Motlanthe were nominated for the positions of both president and deputy president.

Up to the past weekend, Zuma’s stronghold in KwaZulu-Natal was motivating for a “no-contest” conference by Zuma and Motlanthe retaining their current positions. They were also trying to bait the Anything But Zuma lobby by trying to explore a deal that would see Motlanthe take over the state presidency in 2014. But the Gauteng ANC, comprising the lead advocates for leadership change, were not keen on a no-contest arrangement and the deal was stillborn.

Zuma’s detractors are hoping that the current bout of negative publicity, particularly over the Nkandla scandal, would force even the president’s ardent supporters to question whether he had the requisite skills and ability to lead. But so far, these seem to be having minimum impact on the nomination process.

Zuma’s supporters have also reached the end of their tether with Motlanthe’s reticence to commit either way: contesting the presidency or his preparedness to serve on a Zuma ticket as deputy president. They have decided to take Motlanthe’s name off the table completely, thus sabotaging his backup plan.

At a caucus meeting last week, ahead of the past weekend’s provincial general council, it was decided that the province should nominate Cyril Ramaphosa for the position of deputy president on the Zuma slate. On Sunday, the nominations from the province’s branches for the top six positions were put to the vote. Zuma and ANC secretary general Gwede Mantashe were uncontested, but the other four posts were decided through an election.

For the position of deputy president, Ramaphosa received 841 votes, Motlanthe 16 and Tokyo Sexwale got only one vote.

The results for the other three positions show that the delegates were generally voting in a bloc for all the leadership posts according to the province’s preferred candidates.

For the national chairman post, Baleka Mbete got 863 votes, Thandi Modise, six and Peggy Nkonyeni only got one vote. KwaZulu-Natal premier Zweli Mkhize got 833 votes for the position of treasurer-general, while Jessie Duarte received four, Trevor Manuel got three, Ngoako Ramathlodi two and Naledi Pandor did not receive any votes. Duarte, however, received 834 votes for the position of deputy-general secretary, Fikile Mbalula got six, Modise seven and Blade Nzimande received six votes.

On Tuesday, the ANC Women’s League (ANCWL), also fervent Zuma supporters, announced their list of nominees for the ruling party’s top six positions, which turned out to be a replica of the KwaZulu-Natal nomination’s list. The ANCWL had up to now advocated for the current ANC leadership to retain the positions, but have suddenly decided to back Ramaphosa for the deputy presidency instead of Motlanthe.

This strongly suggests that the Zuma camp is staking its bets and now circulating one leadership slate in its support bases instead of leaving it up to chance.

It is not known whether Ramaphosa, who has consistently refused to re-enter politics full-time after leaving for the business sector in the mid 90s, has indicated to Zuma lobbyists that he will accept the nomination for deputy president. He turned down previous attempts to lure him back to serve in the ANC leadership by making it clear that he was not prepared to run against any other leader and would only return as a consensus candidate.

If Ramaphosa does accept the nomination for deputy president, he most certainly will be contested by the “forces of change” who are proposing Mathews Phosa or Sexwale for the position. In this camp, only the ANC Youth League has finalised its nominations. Their leadership slate is as follows: Motlanthe for president, Phosa for deputy president, Modise for chairwoman, Mbalula for secretary-general, Thenjiwe Mtintso as deputy secretary-general and Sexwale as treasurer-general.

The remaining ANC provinces will have finalised their nominations in the next two weeks. At ANC headquarters, the decision has been taken to postpone the 30 November cut-off date for provinces to finalise their nominations, to allow extra time for branches which have not yet been able to hold meetings to submit their nominees.

But based on the nominations that are already in, it is now certain that Zuma and Motlanthe will have a face-off over the ANC presidency. In the way the chips have fallen, both men will be in a precarious position if they lose: Zuma will become a lame duck state president with Motlanthe holding the power in the party, or Motlanthe serving as deputy president of the country while holding no position in the ANC top six.

Motlanthe’s key lobbyists say they do not have a backup plan for him, should he lose the election for the presidency. His refusal to discuss the matter has meant that they have not been able to negotiate any deals with the Zuma camp on his behalf. While Motlanthe’s brief stint as state president when Thabo Mbeki was recalled guarantees him a presidential pension for life, an abrupt end to his career in politics is not what he wants.

Even for the “invisible man”, it might prove extremely frustrating for Motlanthe to go from being a contender for the top job to a well-paid pensioner.

But there is still some wiggle room.

“We are going to the conference with these nominations. It does not mean that when we take a decision that we will not engage with other people because we’ve taken a decision. We will still remain open for engagement with all other provinces,” Zikalala said.

There are indications that as a gesture of goodwill, KwaZulu-Natal would allow Motlanthe, Sexwale, Mbalula and others associated with the forces of change campaign to serve on the new national executive committee, which will also be elected at Mangaung.

But it might also be that KwaZulu-Natal does not want to burn its bridges with Motlanthe as their presidential candidate’s multiple crises may require a bailout plan further down the line. While Zuma does have strong support in KwaZulu-Natal, some of the leaders in that province are mindful that the “strawman” might run into further trouble in the next year and a half, which could jeopardise his presidency.

With Motlanthe still serving as his deputy in the state, they would still need him if things went wrong for Zuma. Even if Ramaphosa becomes deputy president of the ANC, he is not a Member of Parliament and therefore cannot step in if, for example, the opposition’s vote of no confidence against Zuma succeeds.

So for now, South Africa’s future is still a game of Russian roulette between the man who has shown that he is unable to lead and the man who won’t say that he wants to lead.

In three weeks, only one of them will still be standing. DM