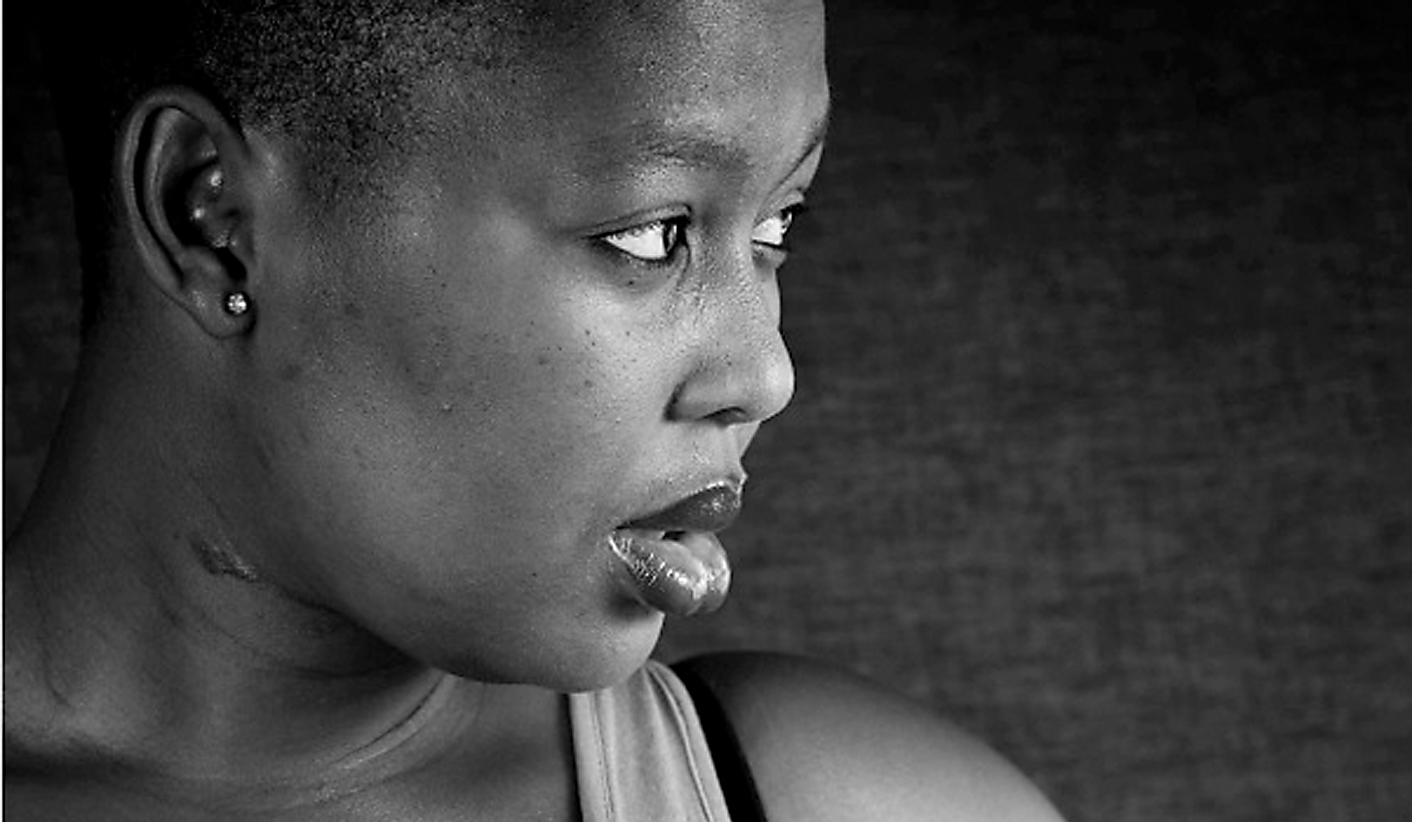 I was promiscuous. I was naughty, very naughty.

My mom worked as a domestic worker and my father was a driver. We were just your ordinary family, but we had everything we wanted and all I needed was love. And a person that would make sure there was a shelter over my head. Clothe me, school me, feed me. That’s all I needed. I think I was the most happiest kid ever.

So in Joburg the guy who broke my virginity was a guy who knew stuff; he was an older gentleman who knew shit is going on out here. He used a condom, which I was very puzzled about. What the hell are you using the plastic for; what’s the plastic?

Nobody told me this is how I got it actually. I got it through sex, but I never knew that. He was a teacher, an older guy. The first time he made love to me… Tiny as I was, naïve, such a baby, fresh, vibrant, he told me to my ears. You know that moment after, the pillow talk?

His pillow talk was: I’ve just tasted your soul, ‘cause we didn’t use a condom.

I was a beautiful girl, okay. And he was like, if I let this go, I’ll never get something like this again. He just wanted me pregnant. Like it’s the only thing that could attach me to him. And immediately he was talking lobola…. And I’m thinking, dude, I’m still going to Joburg. I have a life to lead. I want to be a musician. I was up for it, I was all for it, and instead I got sick.

I just went and had sex and now, sex is becoming my enemy.

I was no longer that hot chick with the beautiful body, skin that looked like it just came out of the freezer. You know when it’s so hot and your body looks so fresh, like you’re just not getting the sun; you’re walking around with your own air conditioning. The virus slowly took that away. The body was no longer the same.

In hospital, the nurse told me: You have AIDS. I clammed up until the moment my mom walked through that door; I broke down. Seeing my mom was like reading an explanation of HIV/AIDS in a dictionary. I broke down; I cried like a baby. I’m like, the nurse said I’m dying. She says I’m dying.

It was harder than telling your mom you were pregnant.

I was thinking: I’m a black child from a very poor Zulu home. The last thing I expect is to get a disease from overseas gay guys. I just thought, it can’t happen to black people; we’re dying of TB already. It’s a white man’s disease or Indian, anything with good hair.

I lived with my baby daughter for nine days. She was alive for nine days. On the ninth day I get a call to come up to the nursery, and they say, we need to have you sit with her for these minutes that you have. She’s, she’s actually leaving us. I was happy for nine days; it’s better than not even meeting her or having her come out dead. I had her move in my stomach. I saw her move outside; she cried for me, she grabbed my hand.

I had a relationship with her. And I’m grateful for that.

But now He owes me. I said: Now, God, you owe me ‘cause you’re not gonna let me feel that joy and take it away and not give it back.

I had just gone for a shopping spree. I was just looking so hot, I was wearing stilettos and I remember I was wearing a black dress with polka dots of blue and white. And beautiful, sjoe, I had just done my hair. You couldn’t tell this person had been through hell. I even prayed about it. I said, God, I don’t want to look HIV-positive.

I just kept quiet. I don’t care if you want me, be with me. If you don’t wanna use a condom, I’m not gonna force you. So what does that make me feel? It made me feel like crap. Every day I had to sit and wonder: did I just infect that person? Am I a murderer? Even that took a toll on me. I started getting physically ill from all these thoughts, and you feel worse than a murderer. Especially after you’ve had that night of fun on a Saturday, and you had a beautiful night with some dude you just met, and instead of feeling fun about it and telling the girls, Oh my God, he had a small dick, you’re thinking, Oh my God I killed him.

It’s a demon that wants you to acknowledge it’s there. And the minute you don’t, it’ll show itself. It’ll show itself to people, it’ll tell people the story you don’t want to tell. So when I started speaking, it kept quiet and it left my body alone. ‘Cause I’m already acknowledging, okay fine you shut the hell up, you sit there, I’m accommodating you. You’re not paying rent in my body.

I’ll talk about you, okay? DM