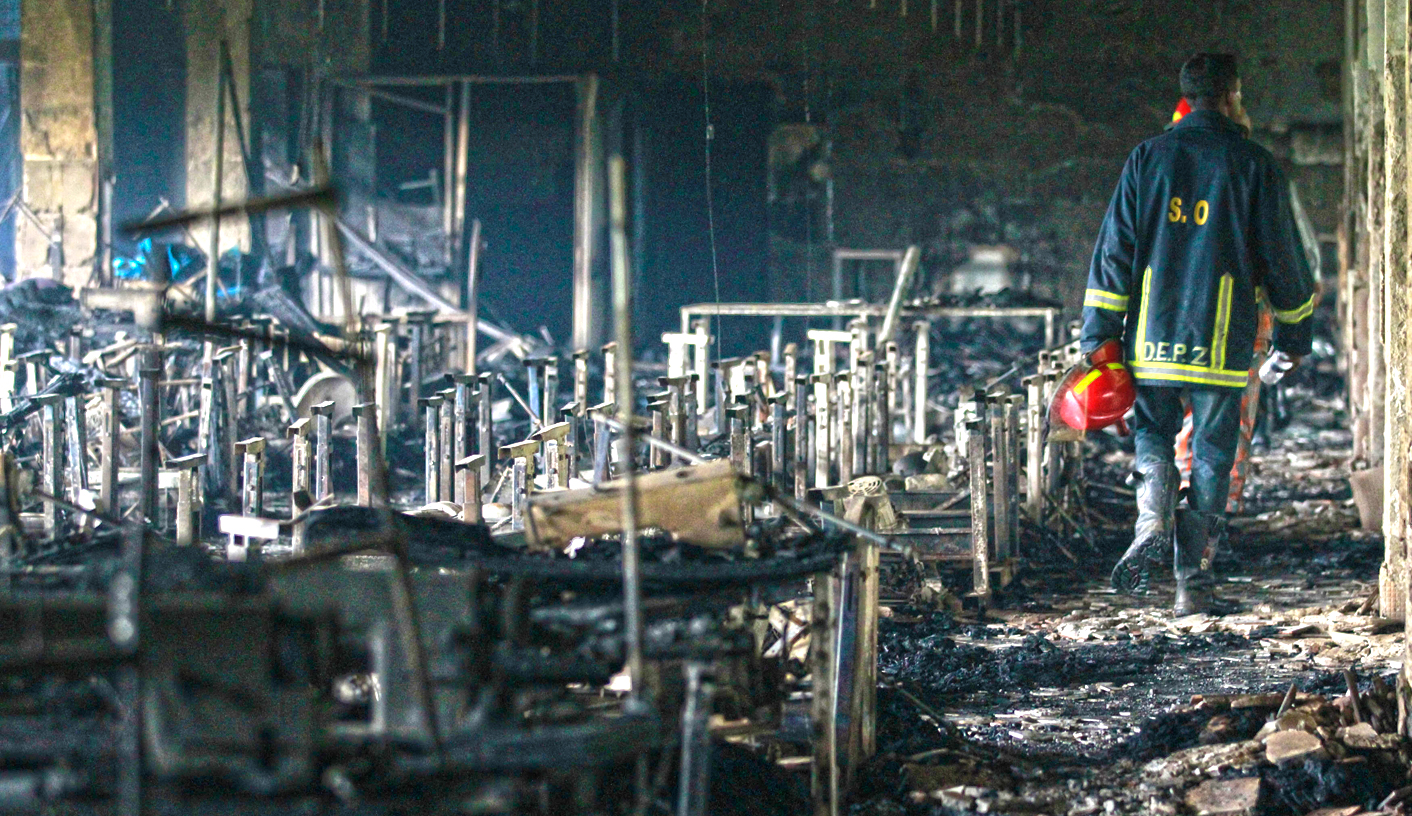 A factory fire in Bangladesh last weekend left more than one hundred people dead. It’s a tragedy by any estimation, but it’s also dogged by controversy considering allegations that the factory was actually producing apparel for Walmart. The seemingly insatiable appetite for cheap goods in the West sees factories in Asia skimp on the niceties of fire safety and decent wages. Where, then, does the blame lie? By KHADIJA PATEL.

More than 100 people were killed last weekend when a fire swept through a clothing factory just outside the Bangladeshi capital Dhaka. It was the worst industrial accident in the history of Bangladesh. But even as thousands of protesters take to the streets of Dhaka to protest against working conditions in Bangladeshi garment factories, while victims of the fire demand compensation, there’s a scramble in Bangladesh and thousands of miles of away in the US to find out who is responsible for the fire.

On Tuesday the Bangladeshi government was adamant the fire was an act of arson, or sabotage as they put it. “We have come to the conclusion that it was an act of sabotage. We are finding out as of now who exactly the saboteurs are and all culprits will be brought to book,” Reuters quoted interior minister, Mohiuddin Khan Alamgir, as saying.

Earlier, Prime Minister Sheikh Hasina said she suspected the fire was an act of sabotage, but she stopped short of identifying a suspect or clarifying why arson had been suspected.

More than 1,000 workers, some carrying black flags, demonstrated in the Ashulia industrial belt on the outskirts of the capital, where the factory is located. They blocked traffic moving on a highway and vowed to avenge the deaths of their colleagues, according to eyewitness reports.

Bangladesh has about 4,500 garment factories and is the world’s biggest exporter of clothing after China, with garments making up 80% of its $24 billion worth of annual exports.

The garment industry has become the pulse of the Bangladeshi economy. More than 10 million people, the vast majority of whom are women, are employed in the industry, accounting for 40% of industrial employment. This industry also contributes about 75% of the total exports and 13% of GDP.

Despite the clothing industry accounting for much of the growth in the Bangladeshi economy, working conditions at clothing factories are notoriously poor. Safety laws exist but are rarely enforced. More common are child labour, overcrowding and locked fire doors.

In 2010, another fire killed 29 people at a facility that made clothes for, among others, Tommy Hilfiger’s parent company, Gap, and Kohl’s. ABC News described that fire as follows:

“Electrical wiring overloaded by sewing equipment is believed to have sparked the flames in the high-rise building. Dozens of workers, breaking for lunch at a makeshift canteen on the roof, were unable to descend smoke-filled stairwells and were trapped far out of reach of ladder trucks. The building, like most factories in Bangladesh, lacked fire escapes, sprinklers, and other modern safety equipment. As the flames intensified — fuelled by piles of clothes and fabric — workers trying to flee said they found at least one of the factory’s gates padlocked. Several were forced to fashion ropes from rolls of fabric to attempt to scale down the side of the building.”

Last year, the International Labour Rights Forum interviewed a young victim of a fire at a clothing factory in Chittagong in 2006. At the age of eleven, Lovely had been working at a factory for less than a month when a fire claimed the lives of 63 workers. Locked exits prevented workers from escaping the fire. Some alleged that it was possible the main gate was intentionally locked at the time of the fire to prevent theft from the factory. Others say there was no fire safety equipment at the factory, nor had there ever been a fire drill.

Lovely barely survived. Her face is deformed and she sustained severe injuries. She never received compensation for her suffering.

According to the 2012 annual survey of violations trade union rights in Bangladesh the International Trade Union Confederation published on 6 June this year, at least 80 clothing factory workers had been injured and another ten were killed in factory fires until that point. According to estimates from Bangladeshi fire brigade officials, at least 500 people have died in garment factory accidents in Bangladesh since 2006.

The fires are too frequent to all be an accident. So too with the fire last weekend, allegations of repressive labour practices that may have exacerbated the loss of life have emerged.

Dhaka district police chief Habibur Rahman told Reuters that complaints from some survivors that factory managers stopped workers from running out of the building when a fire alarm went off were being investigated.

Representatives of the Tazreen Fashions factory, where the incident took place, however have been mum.

On Monday, after initially attempting to distance itself from Tazreen Fashions, Wal-Mart Stores Inc. said that at the time of the fire, the factory “was no longer authorised to produce merchandise for Walmart” and said that a supplier had “subcontracted work to this factory without authorisation and in direct violation of our policies.”

Walmart said that it had terminated its ties with the rogue supplier on Monday. “The fact that this occurred is extremely troubling to us, and we will continue to work across the apparel industry to improve fire safety education and training in Bangladesh,” the world’s largest retailer said.

Walmart claims the Tazreen factory was flagged in May 2011 as being at “high risk” for unsafe conditions. They say they stopped working with many Bangledeshi factories over such risks.

Labour activists in the US have, however, been derisive of Walmart’s stance. They say that no matter what Walmart now claims, the fact that that Walmart goods were indeed being produced at Tazreen Fashions factory means Walmart is responsible for protecting the rights and safety of workers who make Walmart clothes. At the very least, they believe, Walmart should be held responsible for compensation to the families of the deceased and those injured in the fire.

Compensation is, however, a prickly issue. After another fire at That’s It Sportswear killed 30 people and injured dozens – also a result of blocked exits meant to control workers’ movements – JCPenney came under harsh criticism for allegedly backing out of negotiations to compensate the families of victims of the fire.

In response, a JCPenney spokesman provided a statement of support for a joint effort by the Bangladeshi government and the clothing industry to improve fire-safety standards and prevent future accidents.

Scott Nova, executive director of the Worker Rights Consortium, said of JCPenney’s stance: “Partnering with the Bangladeshi government for workers’ rights is like partnering with Bank of America to promote truth in lending.”

“These brands have known for years that many of the factories they choose to work with are death traps. Their failure to take action amounts to criminal negligence,” Ineke Zeldenrust of the Clean Clothes Campaign said of international clothing companies who use Bangladeshi factories.

“As we yet again mourn the loss of scores of garment workers in Bangladesh, we demand that brands step up their game. Tragedy after tragedy underlines our belief that simple, cosmetic changes to existing programmes simply aren’t enough. Action needs to be taken to address the root causes of these fires,” Zeldenrust said.

In October, the Clean Clothes Campaign applauded two manufacturers, PVH and Tchibo, for adopting a fire-safety campaign at Bangladesh factories, where clothes are made for brands like Tommy Hilfiger, Calvin Klein, Izod, Bass and Eagle.

The group also criticised Gap Inc. for declining to sign on to the safety regimen. In a statement, the campaign said Gap’s insistence on the old self-regulatory approach had failed to ensure the safety of workers in Bangladesh. Clean Clothes said that approach had “no transparency, no role for workers or their trade unions, no commitment to pay prices to suppliers that make it feasible for them operate responsibly, and no binding commitments of any kind.”

Last month, however, Gap announced it was implementing new procedures that it called “a critical step forward to address fire and building safety issues” in Bangladesh.

What remains now is to ascertain where exactly the blame lies. Allegations of arson in last weekend’s fire may yet lend a novel perspective to understanding fires at Bangladeshi clothing factories, but what remains are the labour practices beneath it all.

Last weekend’s fire is set to lend much-needed momentum to the fledgling union movement in Bangladesh. The current protests may well translate into wide-scale work stoppages in the sector. And prolonged stoppages may hurt the bottom line of the high-end brands on the opposite side of the world.

But until a sense of profit and loss takes into account as well the conditions of workers, their safety and their basic rights, it is a shallow profit. The poverty of Bangladeshis means these factories are a means out of dire straits. And the cheapness of Bangladeshi industry means global clothing brands will keep using these factories. It’s supposedly a win-win situation, but who wins what is relative. DM

Photo: A firefighter inspects a garment factory after a fire in Savar November 25, 2012. A fire swept through Tazreen Fashion factory in the Ashulia industrial belt of Dhaka, on the outskirts of Bangladesh’s capital killing more than 100 people, the fire brigade said on Sunday, in the country’s worst ever factory blaze. REUTERS/Andrew Biraj