Israel’s military twit: How the IDF’s social media propagandist was found on Facebook in Obama blackface 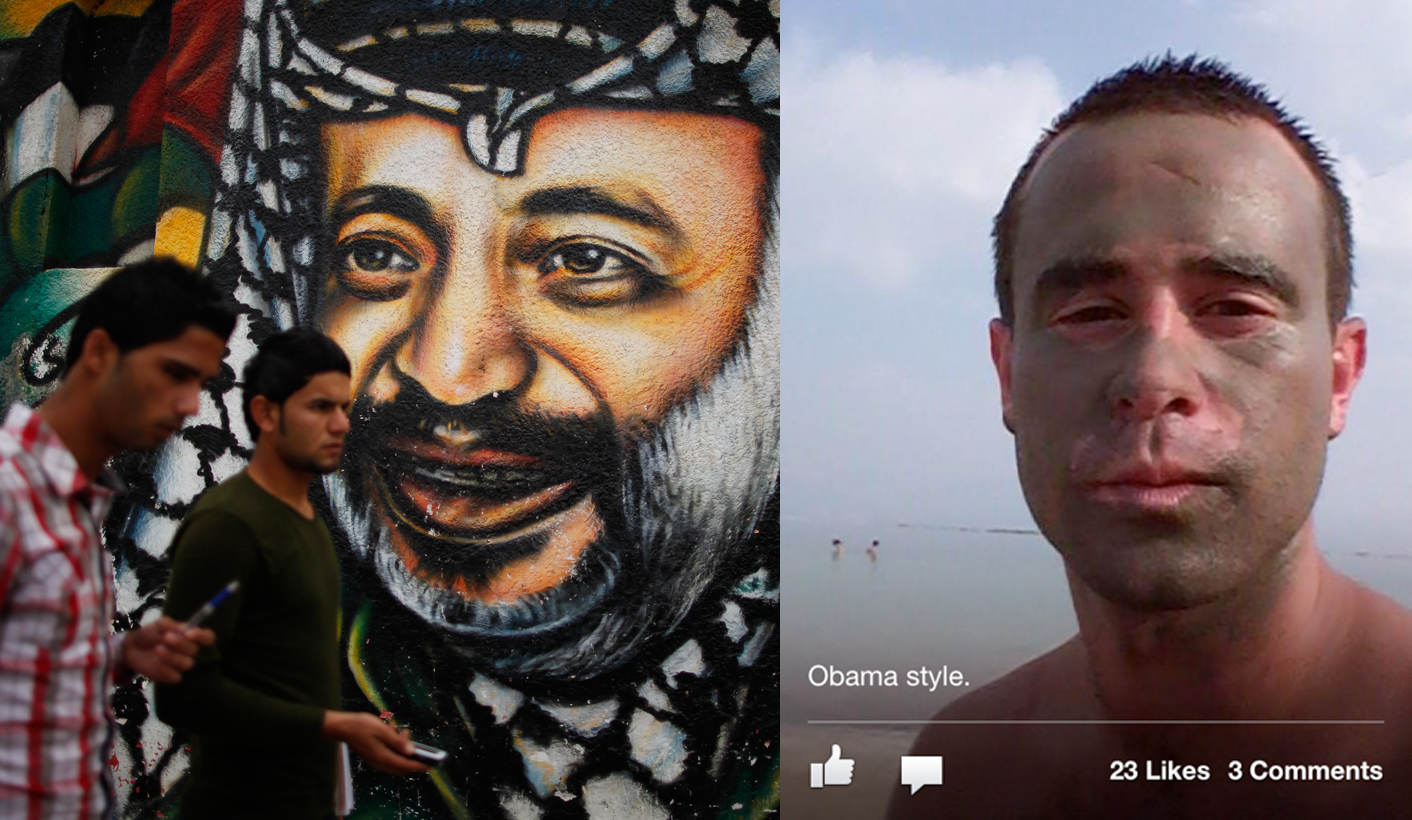 This is the first in an occasional Daily Maverick series entitled Twitter, Facebook, and War, in which we investigate how social media and warfare have become increasingly intertwined. By RICHARD POPLAK.

When the latest hostilities between Israel and Hamas broke out several weeks ago, the New York Times The Lede blogger Robert Mackay charted a different sort of war, occurring not in the Gaza strip, but online. Mackay, along with his colleagues Fares Akram and Isabel Kershner, noted that after the Israel Defence Force killed Hamas leader Ahmed Jabari in a so-called “pinpoint strike”, the assassination was broadcast on the IDF’s YouTube channel, and tweeted to 207,940 followers by the soon-to-be ubiquitous @IDFSpokesperson.

@IDFSpokesperson tweeted warnings —“We recommend that no Hamas operatives, whether low level or senior leaders, show their faces above ground in the days ahead” — and justifications — “More than 12,000 rockets hit Israel in the past 12 years. RT if you think #Israel has the right to defend itself.”

Not for the first time in a recent conflict, Facebook and Twitter and other social media spaces become a stage in the theatre of war. While the tone of the tweets from both sides were puerile and smacked of the schoolyard, the results were no less deadly for it — both @AlqassamBrigades and @IDFSpokesperson played a vital role in the propaganda efforts of their respective teams. And I use “teams” deliberately — the language they used was culled directly from the tweets generated by a PSL London Derby, or a Sharks/Blue Bulls rugby game.

In the case of @IDFSpokesperson, the recent Gaza campaign, AKA Operation Pillar of Defence, will most likely be remembered as a highpoint. Yesterday, The Lede ran a blog detailing the fact that the man behind the Twitter mask, a 26-year-old Belgian Israeli named Lt. Sacha Dratwa, made a bit of a whoopsie on his Facebook page. Dratwa was outed by Tablet Magazine in a story, published on November 20,called “The ‘Kids’ Behind IDF’s Media,” by Allison Hoffman. Hoffman states that Pillar of Defence “may be the first war to feature direct trash-talking between enemies [online.]” She’d be surprised to learn that this is by no means the case, and that Africa has the Israelis and the Palestinians beat on this, and by a long shot. But the story was remarkable for introducing us to a genuine cyber propagandist, and allowing us into his world.

Which, as it turns out, includes a picture of himself, in blackface, with the rather unfortunate caption, “Obama style”. In other posts, Dratwa has made no bones about his ambivalence toward the 44th US president  — while Obama sold a pretty good dream, according to Dratwa, “with dreams no one can fill his fridge or feed his children… Americans today need a father who is able to lead the country with a strong hand, not a dreamer.” Presumably, Mitt Romney was just such a father.

Oy. Here’s what the Lebanese blogger who broke the story had to say about the picture:

“So this is what the Zionists call social media war? An IDF spokesman who is so moronic as to keep a rabidly racist photo like brown-face on his FB profile on PUBLIC settings, so that a half-asleep Zionist-hater like myself could discover it on Friday morning within seconds of flicking through his pics? He made it too easy.

“Sad to see that Americans on Twitter and elsewhere will only understand Zionist racism when viewed through their own cultural lens and lose sight of it when it is practiced in institutionalised form and in a most brutal fashion against Palestinians. But at least this is a start.”

Which brings us to Dratwa himself, and the trail he has left online over the course of his young life. “I am the Head of the New Media Desk at the IDF Spokesperson’s Unit,” he states, on his newly secure FB profile. “I was the co-founder & co-CEO of Tidal Wave Media, a leading corporate social media consulting & marketing firm. I worked for Laurus Consulting Group has [sic] project manager in the field of SMO. I have four years of experience as an interactive marketer and brand manager. I have a BA in interactive communication from the Interdisciplinary Center of Herzeliya.”

According to his Facebook page, he has a degree in “Communation [sic], New Media, Marketing.” There’s a poignant touch of foreshadowing embedded in the misspelled “Communation” that sums up the dangers inherent in working in the social media space during this, the first Facebook generation: we have not quite caught up with the implications of how quickly we can disseminate information, and how quickly that information can be analysed and spat back at us. In other words, and in the context of war, the current crop of cyber warriors — and Lt. Dartwa is most undoubtedly among their ranks — are charting a new battlefield, and getting mortally injured in the process.

And while Lt. Dratwa’s job may appear to be new, it isn’t: he’s a propagandist. There is nothing essentially special or unique about Twitter and Facebook in this regard — they are tools, in the same way that the mass-produced poster, or the pamphlet, or the newsreel, were. The difference is not in how propaganda is made and disseminated —  the similarities between Twitter and posters, for instance, far outstrip the differences —but in who does the disseminating, and in the assumptions they make about themselves in relation to their work.

There have long been famous propagandists — the Nazi filmmaker Leni Riefenstahl; the Russian poster maker Klustis; writers too numerous to mention. But in the postmodern age, everyone is famous. Lt. Dratwa was hired because he was an adept on social media, which is another way of saying that he was a particularly committed self-promoter. In a performative age, he who performs loudest and collects the most likes will by definition have the most followers, and thus build an effective platform from which to punt his brand of snake oil.

The second important point about Propaganda 3.0 is that we are able to chart the responses, read the comments, and get a proper idea of how this stuff is consumed. Comments that run under articles in any publication, including this one, are notoriously difficult to parse in any meaningful way — it’s just too easy to post inflammatory or contrarian remarks without any consequences. But the Israel Defence Force’s blog appears to be a WordPress hack, with comments linked to Facebook profiles. Which means that in most cases, we know who is doing the posting, and we can properly chart their politics.

Under a post titled “Why is the number of Israeli casualties so low?” — a fairly typical entry in that it lobs a rhetorical softball and then hits it out of the park with statistics and YouTube videos — we have comments from the Palin ECoalition (a Palin fan site with Israel and Jewish Republican links); a range of religious Jews (“Don’t forget Hakadosh Baruch Hu! He’s the real reason the casualties are so low…”); a smorgasbord of evangelical Christians (“Continuing to pray for the Peace of Jerusalem!”); a handful of lefties; and a bushel of conservatives. On the blog, which is linked to Facebook, @IDFSpokesperson is clearly connecting with his demographic.

What’s more, on Twitter, we get to see who @IDFSpokesperson follows. Among others, @QassamCount (“Updates about rocket attacks from the Gaza Strip into Israel. Only facts.”); Michael B. Oren (“Israel’s ambassador to the United States”); CUFI (“Christians United for Israel is the largest pro-Israel organisation in the United States and one of the leading Christian grassroots movements in the world”); and, in a case of keeping your friend’s close and your enemies closer, Peter Beinart (“Columnist at Daily Beast, Editor of openzion.com”).

In all of this, Dratwa’s Obama pic is remarkable not for the breadth of its offensiveness, but rather its banality. Thousands of young 20-somethings have lost their jobs, or found themselves in jail cells, over injudicious Facebook or Twitter posts. But in the case of a cyber warrior like Dratwa, the mortal blow was struck not by a bullet, or a Qassam rocket, but by the trail he had left on the Internet. Like a high school student or an intern, his past transgressions, no matter how insignificant (I’ll allow you to gauge the significance of a blackface picture of the US president posted by an individual occupying a high position in the American-funded IDF) can end a career.

The only effective cyber warrior is a ghost, a young man or woman without a past. But good luck trying to find one of those. The IDF placed Dratwa in his post because of his profile, not despite it. In light of his stupidity, they may need to rethink their tactics not only in the real world, but in the virtual world too. DM