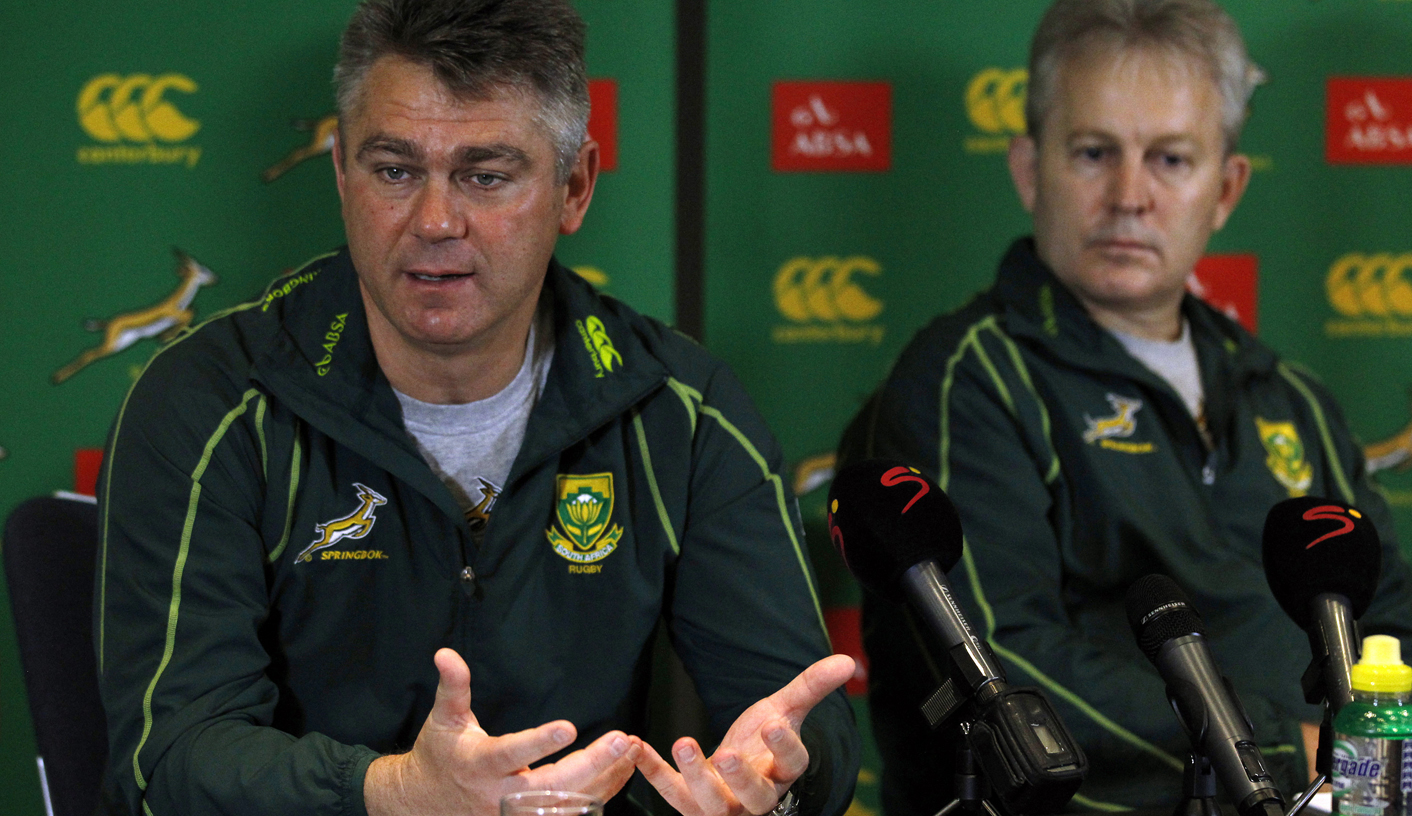 But if he is to continue winning public approval in 2013, the Springbok coach must focus on integrating attacking backline play with the formidable pack he is building and the outstanding defence shown on tour. He will also want the team to perform more consistently. By KEN BORLAND.

Springbok coach Heyneke Meyer says his team’s rise from number four to number two in the world rankings tells him they are on the right track, but it was the smattering of applause his squad received when they arrived at OR Tambo International Airport on Monday that was perhaps an even bigger advisory that the public, his sternest critics, are pleased with his efforts.

It’s hard to remember when the Springboks were last applauded in the arrivals hall at OR Tambo, but it must have been 2009 when they returned from Hamilton with the Tri-Nations trophy. Generally, the media gathered for interviews have been the only ones to show much interest, the general public keeping an awkward distance, much like how the employee who got drunk and took all his clothes off at the office Christmas party is treated.

But South Africa’s unbeaten tour of Great Britain and Ireland, the first perfect end-of-year trip since 2008, has enabled Meyer to lift his record in his first year in charge to seven wins, three losses and two draws from 12 Tests. The former Blue Bulls coach has admitted that for him, too, it has been a steep learning curve.

“Our three goals were to remain unbeaten, which has not been done for quite some time on the end-of-year tour, secure the number two ranking and, perhaps most importantly, make our supporters proud. So it was really great to see the support here at the airport.

“It’s been a tough year, we’ve lost three out of 12 Tests, but the great thing is we started at number four on the world rankings and now we’re second. So I’m very happy, especially considering we lost a lot of guys through injury, and we can only grow from here,” Meyer said.

De Villiers was initially appointed as captain for just the three June Tests against England, which was quickly extended to the whole year and now, after an often torrid season, Meyer advised that he was unlikely to change captain next year in the light of the calm, intelligent leadership shown by De Villiers.

“Jean has been awesome. He’s one of three players to have started every game this year and he’s also been a great ambassador for the country. In the last three games, he was our main ball-carrier and he gained good ground for us. There’s no reason he shouldn’t be captain again next year,” Meyer said.

The two areas about which Meyer has been most strongly criticised have been the attacking play of his side and his transformation record.

While the wet conditions overseas served to undermine much of their attacking ambition, there were hints against England at Twickenham last weekend that, with Lambie at flyhalf and Juan de Jongh at outside centre, the backline could develop into more of a threat.

The transformation issue is one that all Springbok coaches – save for Peter de Villiers – have had to face, but it is disingenuous to single out Meyer for criticism.

Nine players of colour, including five black Africans, were in the touring squad which is as good a record as any of his predecessors, including De Villiers. With Siya Kolisi out injured, it is difficult to imagine other black players who can feel unfairly treated by not being selected.

Even criticism that these players did not get game time on the tour is unfounded, because there were a heap of white players who also spent the three weeks carrying tackle bags. It’s the nature of sport that not everyone can get a run and even someone like Elton Jantjies, whose form has begun to taper off after a great start to the Currie Cup campaign, was overlooked because Lambie deserved a fair chance to stake his claim at flyhalf.

Meyer’s focus in 2013 should be on wedding better backline attacking play to the formidable pack he is building and the outstanding defence shown on tour. He will also want the team to perform more consistently: they have produced their best for the full 80 minutes perhaps only once this year (against Australia in Pretoria) and the need for a ruthless, killer edge was shown in the last two matches when they allowed both Scotland and England back into contention in Tests that looked done and dusted.

But these lapses of concentration that afflicted the team are in stark contrast to the mental strength they showed in winning all three Tests in Europe despite being in high-pressure situations (even if they were of their own making).

“A lot of guys hadn’t been on an end-of-year tour before and a lot of great players have lost over there. We’d lost the previous Test against Scotland and we’d only won one of the last three in Ireland. I always say there are only two types of rugby: winning rugby and losing rugby. And we won three out of three, so I’ll take that.

“There is still lots of room for improvement, but that will come with experience. It takes a lot of mental effort to grind out wins like that. But we made life hard for ourselves by conceding 17 penalties a game on tour, compared to six per game back at home, so that’s unacceptable and has to change,” Meyer said. DM