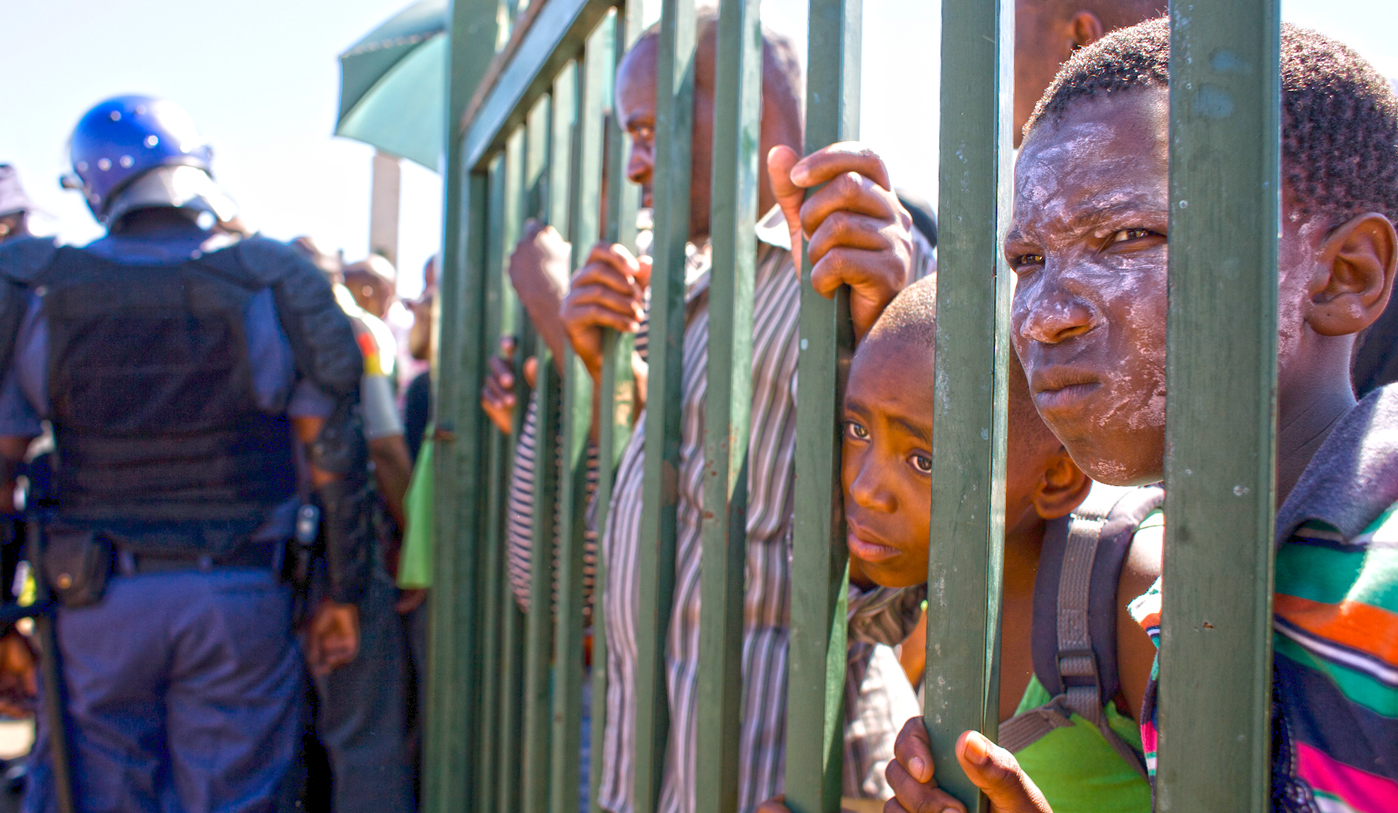 The Lenasia demolitions took an unexpected turn on Monday, as protestors gathered early in the morning to stage a service delivery-like protest. By 11:00, around 200 people had convened peacefully at the Lenasia Civic Centre singing struggle songs, waving placards and raining a cacophony of complaints on any media willing to listen. They were waiting for Minister Tokyo Sexwale, whose performance was a mixture of peacemaking, theatre and stump speech. By GREG NICOLSON.

“We wanted those houses to be demolished,” said a Lenasia resident who didn’t want to be named. “It’s because those houses are making the price of our houses go down.” He was one of the protestors who said they were renting their properties or have legally purchased homes through bonds. He presented a valuation of his home, R340,000, and asked how someone buying a plot for R6,500 would think it was legal.

“I’m here for my rights,” said Mandla, another resident. “I’ve been here 12 years. These illegal people buy stands for R5,000. Electricity and water, they steal it.” The crowd used the terms illegals and aliens for anyone whose house was bought illegally. “Those people don’t live here. Most of them are from Soweto and they rent their properties out.” What do they want to happen? “Demolish! We want the government to demolish,” yelled the group.

The protest coincided with a visit from Human Settlements Minister Tokyo Sexwale, who had taken it upon himself to intervene. He spent the day in Lenasia, treading delicately between those demanding the court order to demolish be enforced and the public outcry over citizens who have lost the properties they purchased from swindling syndicates and corrupt government officials.

Sexwale met with stakeholders from the community, government and civil society Monday morning to get their views and set a timeline to resolve the issue. He was scheduled to do a walk-through of affected homes, but his convoy darted through Extension 13, where demolitions started, stopping briefly at houses that matched MEC of Local Government and Housing Ntombi Mekgwe’s claim that only unfinished and unoccupied houses had been razed.

As Sexwale listened intently to the one or two concerns he had time to hear, a resident rushed after his convoy, upset the minister was being fooled by the local and provincial government officials. He never got to speak to the minister, but Sexwale did have time to smile at a young schoolgirl and ask her if she wanted to have a house when she grew up. Photo: Before Tokyo Sexwale told police to stand at the rear of the Lenasia Civic Centre they formed a line dividing those supporting demolitions and those against them.

The public meeting in Extension 4, Lenasia South, was building for trouble. Public Order Policing members watched two toyi-toying groups – the pro-bulldozer crowd inside the fence and the anti-bulldozer group outside. When Sexwale arrived, those inside were ushered into the civic centre, leaving the victims of the demolitions locked outside the premises. “We won’t let them through the gates because they have bought land illegally,” a guard told me earlier.

Police enforced the position and refused entry to the shouting crowd. “If you get hit by one of these guys, don’t come crying to us,” a cop told me as I photographed the standoff.

A City of Johannesburg official tried to negotiate the crowd’s entry, but stopped after being insulted. It took an intervention by the Joburg MMC of Housing Dan Bovu to finally let the victims enter the civic centre.

“I have come here to unite people,” began Sexwale in a charismatic, occasionally theatrical, address.

Photo: Human Settlements Minister Tokyo Sexwale toured Lenasia before holding a public meeting where he reduced divisions among residents and gave them a timeline for engaging on a solution.

Riot police had formed a line between the opposing groups in the audience, but after consulting the audience, Sexwale told them to leave. “The police are still fresh from Marikana; let’s not call them,” he said, calling the North West deaths “a serious tragedy”. At times, Sexwale sounded like a headmaster. “I called the meeting. No one invited me. I invited you. Please behave in my meeting.”

He told the crowd they would hear some hard truths, but essentially quashed the animosity through statements that everyone could agree with. He provided a way forward without dismissing the concerns of either group in the audience.

The Hawks and the Special Investigative Unit are investigating the illegal sale of land, he said, and he called on community members to come forward with information. “The government doesn’t negotiate with criminals… We cannot allow lawlessness in a democratic South Africa.” Multiple people have been arrested for involvement in the illegal sale of land in Lenasia, including a high-ranking official, said Sexwale.

But the minister said no innocent victims should be punished. “There are women, single mothers; there are children; there are innocent people who can’t suffer, but they must come to us.” To those who knew they were buying land illegally he said, “We also want to work with you. Open up. Open up and tell us who else is involved.” Photo: A large media group followed Sexwale as he darted through Lenasia. Some residents were able to corner him to voice their concerns but others complained his brief stops were pointless.

Building must stop on the land and a wide range of stakeholders will meet on Wednesday to discuss the issue, he added. By the middle of next week, Sexwale hopes to have a solution. “It’s called ‘all-in’ – nobody should be left out.”

The High Court has put a halt on the demolitions, but the minister wants the matter settled out of court. He didn’t apportion blame to the province for bungling the eviction process, but said these matters would be resolved differently in the future because the land shortage means they will occur again.

By the end of his address, the differences between those supporting demolitions and those against had been watered down. Both groups succumbed to Sexwale’s broad comments and accepted the offer of finding a solution on another day. Tokyo finished in the same pedagogic manner, but his admonitions had become jokes.

From the very beginning he was the right man to address Lenasia, and it worked. There are, of course, questions about his motivations. He emphasised his struggle credentials and the hopeful candidate for ANC deputy president dropped in comments on leadership: “A true leader never lies. A leader, a fine leader never makes false promises.” “ A leader must not come and smile and be nice. I have not come here for your votes for 2014 or Mangaung.” And the little dig: “You can also be a councillor or a president; no one is bigger than the law of this country.” Photo: Protests started early Monday morning with residents calling for demolitions to continue in Lenasia. Some carried bills that showed the current valuation of their properties, saying they are worth hundreds of thousands of rands and no one could think they were buying a plot legally for under R10,000. Those against the demolitions claimed their opposition were a “rent-a-crowd”.

But, as with most topical issues at the moment, rumours of Mangaung still swirl round Lenasia. Sexwale’s visit followed that of fellow change agent Julius Malema. There were suggestions that the pro-demolition group were bussed in to discredit the two and protect the local councillor. There are even rumours swirling that Gauteng ANC Chairman Paul Mashatile had pushed for the demolitions to discredit the Zuma government.

The Young Communist League has been vocal in condemning the demolitions, and its spokesman Khaya Xaba said that everything was currently viewed in relation to Mangaung – no matter the issue. “Honestly I don’t think it has anything to do with Mangaung,” he said. The YCL is supporting President Zuma’s second term, but had already called for an intervention from Sexwale before he came on Monday.

The South African Human Rights Commission spokesman Isaac Malangu said, “We welcome the minister’s intervention in this matter. It’s long overdue. We will be part of this and give all the information he needs… We just have to find a human way of resolving the issue in Lenasia.”

After Sexwale had eased the pressure, leaders of both the pro and anti-demolition groups appeared happy with the plan of engagement. Tokyo’s challenge, and that of housing MECs across the country, is to stop the corrupt sale of land and craft a solution for the next time a Lenasia case arises.

“Lenasia – we want this to be an example of what the rule of law should be,” said Sexwale.

Only one way to find out, we suppose. DM

Main photo: The group of residents who oppose the demolitions in Lenasia were initially locked out of the public meeting with Tokyo Sexwale before officials intervened.