How Richard Goldstone saved thousands of lives in Opera... 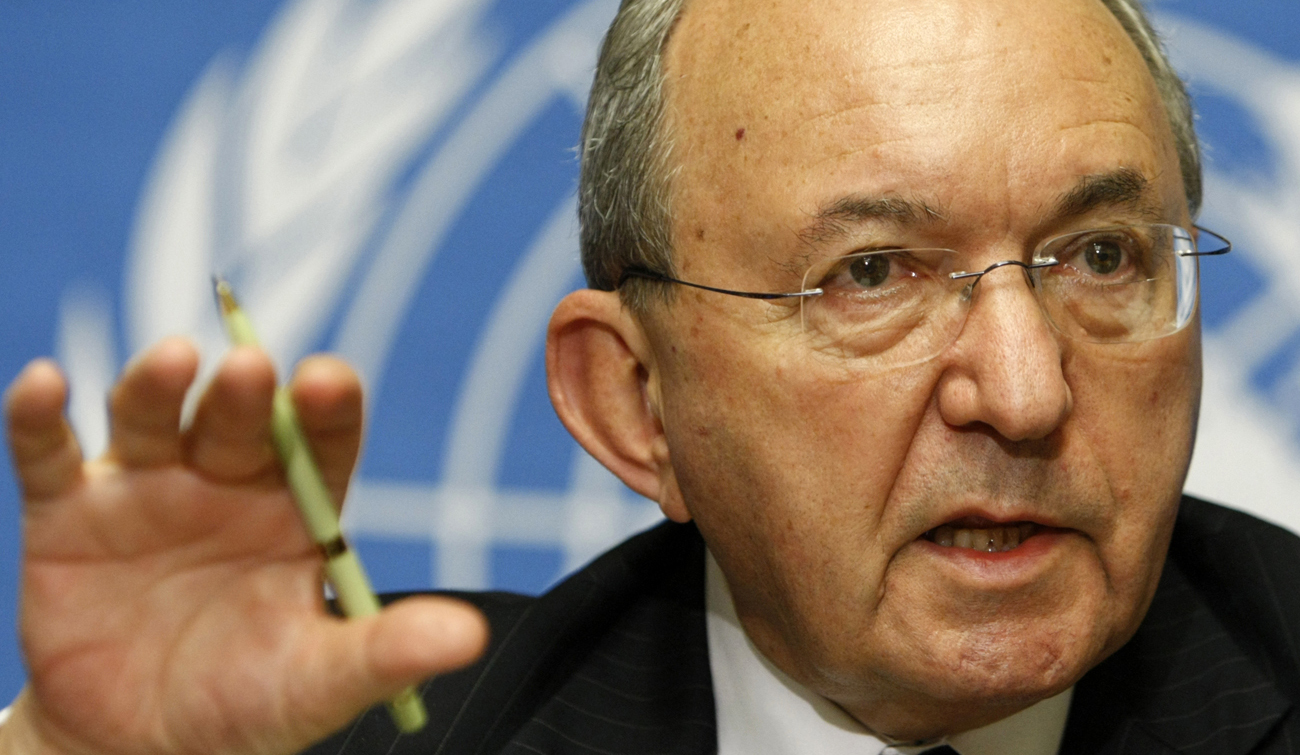 It seems more than likely that the decision of Israeli Prime Minister Benjamin Netanyahu not to go ahead with his planned land invasion of Gaza was motivated, in the main, by a desire to avoid another Goldstone Report. Which means that a South African judge can finally take a well-earned bow. By KEVIN BLOOM.

Uri Avnery, at 89-years-old still one of Israel’s most celebrated and vocal leftists, made a comment in the international press last week that’s not going to be winning him any friends amongst his country’s hardline majority. Not that Avnery cares, of course — his demands for peace with Hamas and a Palestinian state on the old 1967 borders have lost him scores of friends over the years — but this statement was slightly different. Basically, he attributed the Israeli Defence Force’s restraint during Operation Pillar of Defence to a hated South African jurist, and not to the so-called moral code of the army itself.

“[Richard] Goldstone can be very satisfied,” Avnery told the journalist Robert Fisk on Friday, “he really saved a lot of lives.”

The old activist’s contention was that the damning Goldstone Report, formally known as The United Nations Fact-Finding Mission on the Gaza Conflict (which offered a record of the events of 2008/9’s Operation Cast Lead), was what prevented a ground incursion this time around.

To provide a map of the minefield a Jew enters when he makes allegations of this sort, it’s necessary perhaps to quote the words of Gerald Steinberg, who reflected the dominant view in a column in the Jerusalem Post on Saturday.

“[During] the first Gaza war, the Islamic majority in the UN Human Rights Council and the allied NGO network issued a flood of allegations of ‘war crimes’ and ‘deliberate policies to kill civilians’. Following the war, Richard Goldstone… agreed to head a patently biased ‘investigation,’ producing a report a few months later focusing on 36 specific incidents, based on unverified, and in many cases, clearly false NGO claims. The Goldstone Report was the ultimate weapon in the demonisation campaign, but the Israeli government and IDF seemed unable to defeat this form of warfare.

“This time, however, there will be no Goldstone and no report with similar allegations. Partly reflecting Goldstone’s belated retraction, and partly due to the Israeli recognition of the need to pre-empt such warfare, these threats are largely off the table.”

In other words, the Israelis were not guilty of war crimes in Gaza during Operation Cast Lead, and in 2012 steered clear of a land invasion and stuck to precision weaponry so as to head off any further false allegations at the pass.

Before dealing with the tricky question of Goldstone’s retraction, let’s dispense with a couple of key facts that the Steinberg hypothesis conveniently ignores. First, in 2009, when Goldstone was invited to lead the fact-finding mission, the mandate he was given had called only for an investigation of violations committed “by the occupying power, Israel”. Goldstone had insisted that the scope be extended to include possible violations committed by the Palestinians, making the Goldstone Report the first UN report to accuse the Palestinian side of a grave breach of international law.

Second, it was solely the report’s inclusion of atrocities committed by Israel — particularly the finding that Israel had engaged in a “deliberately disproportionate attack designed to punish, humiliate, and terrorise a civilian population” — that caused the furore in the Jewish community.

It will be remembered that in January 2010, Alan Dershowitz, the celebrity American defence attorney and professor of law at Harvard, publicly and unambiguously severed all ties with his colleague and friend. “The Goldstone Report is a defamation written by an evil, evil man,” Dershowitz told Israeli Army Radio, adding that he was appalled by the report and couldn’t fathom how its lead writer could be Jewish. He compared it to a Jew writing The Protocols of the Elders of Zion, and claimed that the South African judge was using the fact that his last name was “Goldstone” to substantiate the defamation.

By then, somewhat famously, Israeli Prime Minister Benjamin Netanyahu had already compared the “Goldstone threat” to the nuclear and missile threats Israel was facing from its sworn enemies; Israeli President Shimon Peres had dismissed Goldstone as “a small man, devoid of any sense of justice”; and Israeli finance minister Yuval Steinitz had labelled him “a Jewish antisemite”.

Would these men so vociferously and emotively have lashed out against Goldstone had the report been open to discrediting by more dispassionate means? Would they have felt so besieged and betrayed had the author of the report not himself been a Jew? Would the leading Israeli daily Yedioth Ahronoth have run an exposé — devoid of any context — on Goldstone’s years as an Apartheid judge had the facts and figures to conclusively disprove his report been available?

Probably not, which was why the Jewish and Israeli mainstream decided instead to pummel the judge’s character until he felt that his only recourse was to publish a retraction in the pages of the Washington Post. For close on four months this year, I researched a story, for the local long-form journalism website mampoer.co.za, on the entrenched South African Jewish hypocrisies brought to light by the Goldstone Report. One of the key passages in the resulting 11,000-word piece came when the jurist, after he was allowed to peacefully attend his grandson’s bar-mitzvah (the threats of protest had made international headlines), was hauled to a meeting of the South African Zionist Federation at which he would “face the wrath” of the community.

As SAZF chairman Avrom Krengel told me, Goldstone was asked at this meeting, by no less a personage than Bidvest CEO Brian Joffe, whether, given all that had happened, he would take on the role and write such a report again. His reply was supremely instructive: he would only do it, Goldstone said, if he did not have a family.

Most of the colleagues and friends of Goldstone that I spoke to for the mampoer.co.za article perfectly grasped the sentiment. Partly, the feeling was that the fallout to his reputation among his Jewish peers caused Goldstone to recant, but the main driver, it was understood, was the effect that the onslaught had on his family. It’s a theory that is more than borne out by the substance — or rather, lack of substance — of the recantation’s wording.

“In short there is a mystery here,” wrote Roger Cohen of the New York Times, shortly after the infamous Washington Post op-ed appeared. “Goldstone has moved but the evidence has not, really.”

Cohen’s argument was that Goldstone was being disingenuous when he claimed that he did not know at the time his report was published that “civilians were not intentionally targeted as a matter of policy”. In support of this, he argued that the UN follow-up report, chaired by Mary McGowan Davis, which had looked at the way Israel had investigated officers alleged to have targeted civilians, had found that the IDF was not prosecuting these men vigorously. On the contrary, according to Cohen, McGowan Davis found that Israeli military investigations into Operation Cast Lead were tardy, lenient, opaque and flawed.

Where Goldstone quoted the McGowan Davis report as acknowledging Israel’s allotment of “significant resources to investigate over four hundred allegations of operational misconduct in Gaza”, Cohen quipped that he must have been reading a different document. In his version of McGowan Davis’s report, Cohen read this: “There is no indication that Israel has opened investigations into the actions of those who designed, planned, ordered and oversaw Operation Cast Lead.”

Cohen concluded: “That raises the issue of whether [Goldstone] buckled under pressure so unrelenting it almost got him barred from his grandson’s barmitzvah in South Africa. Is this more a matter of judicial cojones than coherence?”

In hindsight, it seems almost certain that it was. But when a ceasefire was signed on Thursday 22 November without Netanyahu’s planned land invasion having come to fruition, Goldstone’s about-turn — as well as the factors that caused it —became irrelevant. Fact was, Netanyahu didn’t want to expose himself to the messiness that results from ordering 19-year-old soldiers into hostile civilian populations to seek and destroy “terrorists,” and so for once in his belligerent career he held back.

Even a gung-ho Zionist like Steinberg had to conclude that without Richard Goldstone, Netanyahu would have gone in guns blazing. Steinberg’s compliment may have been unintended, but if as he says “the Goldstone Report was the ultimate weapon in the demonisation campaign” last time out, then it was a compliment nonetheless.

And to refer back to Uri Avnery, Goldstone can finally rest satisfied. Given all that he’s gone through, his “damning and damned” report turns out to have saved countless lives. DM