Judge Davis on ‘No confidence’: Debate must happen, but cannot be rushed 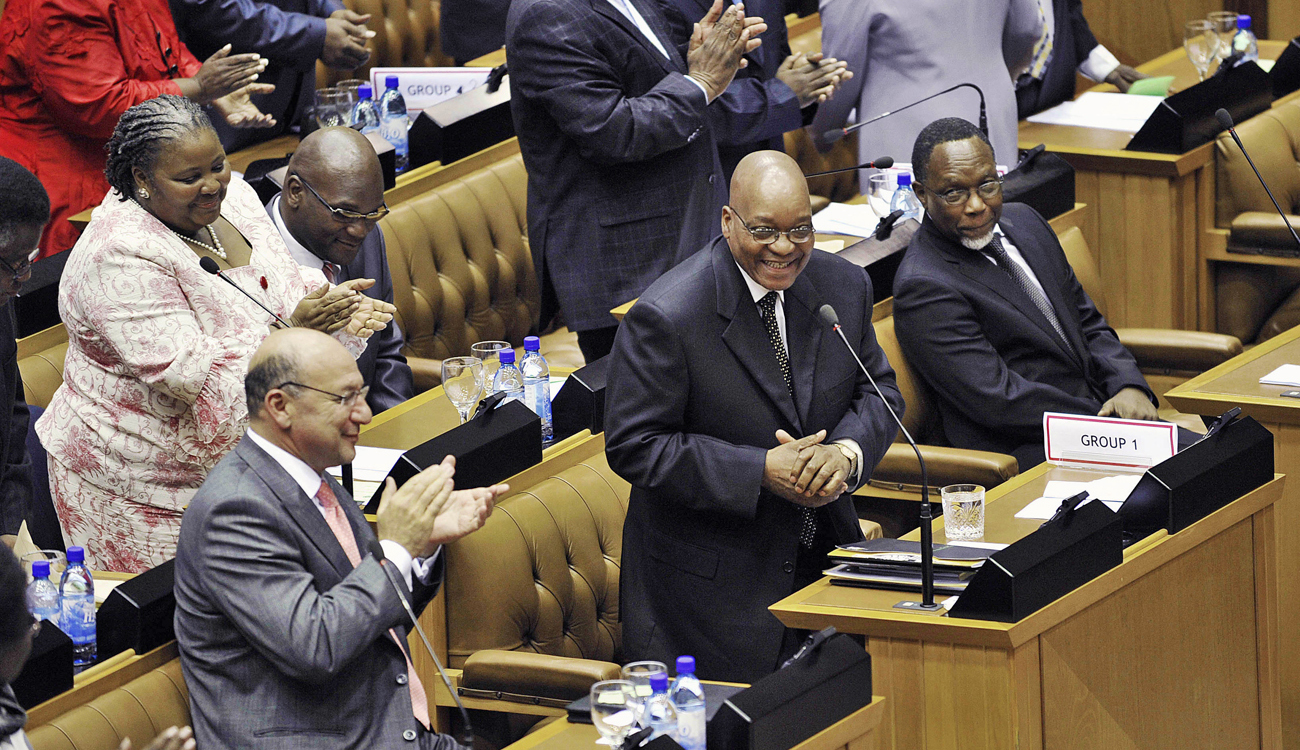 On Thursday in the Western Cape High Court, Judge Dennis Davis squashed opposition parties’ hopes of forcing a parliamentary no confidence debate in President Jacob Zuma that same afternoon. It would have been a riveting way to end the parliamentary year, but Davis’s ruling was a fair one which upheld the separation of powers in a way we should all applaud. By REBECCA DAVIS.

Dennis Davis did not exude the air of a man who was thrilled to find himself in his position on Thursday. He had been given a mere 48 hours to adjudicate the matter of whether the judiciary should compel Parliament to debate the question of whether President Jacob Zuma is fit for office.

In the event of Davis ruling that the National Assembly hold the debate on Thursday afternoon, he might have set in motion a process which could have led to the toppling of the President and his Cabinet (in the farfetched event of the motion passing). It’s a decision that one can imagine would not be pleasant to make under extreme time pressure.

On Tuesday, Davis had irascibly expressed his feelings on the matter: “It’s ridiculous to put such pressure on judges for matters of this importance. Judges are not just slot machines where you put something in and get something out.’ But DA parliamentary leader Lindiwe Mazibuko made it clear that the opposition believed it had no other option except a legal route, since it seemed apparent that the ANC was attempting to block such a debate altogether.

But by Wednesday the ANC had presumably realised that the courts would rule that it was unconstitutional for the majority party to stop the minority party leading a motion of no confidence. ANC chief whip Mathole Motshekga announced that the ANC was perfectly fine with the idea of such a debate, as long as it had time to prepare for it. The week of 26 February 2013, he suggested, would be provide “a reasonable timeframe for which a motion of such magnitude should be considered by Parliament.”

Daily Maverick’s Ranjeni Munusamy pointed out on Wednesday that this choice of date was bizarre for a number of reasons, not least because it is the same week that Pravin Gordhan is due to present the Budget.

Had Davis ruled the matter of sufficient urgency to be debated the same afternoon, it would have created a rather bizarre situation whereby Lindiwe Mazibuko, Cope leader Mosiuoa Lekota and IFP head Mangosuthu Buthelezi – all of whom were present for the afternoon – would have had to rush straight off to the National Assembly to begin the debate, since Thursday’s session was the last National Assembly session of the year. Parliament does not technically close until next month, however, which is why opposition parties continue to maintain that a special session could be scheduled in the weeks to come in order to debate the motion.

Delivering his ruling on Wednesday, Davis told the court that the determination of the case involved “considerable constitutional weight”, and as such it would have been more appropriate for a bench to hear it. This was rendered impossible by the urgency of the situation, which he called “highly undesirable”. Davis was at pains from the outset to clarify the limitations of the court’s purview, lest there be any misunderstandings on that front.

His job was not to consider the question of whether the President has conducted himself inappropriately or is unable to fulfil the functions of office, Davis said. It was also not to weigh up the prospects of success for a motion of no confidence. If some people considered the motion “frivolous” – possibly a dig at the ANC, which has labelled it such throughout – then that, too, was irrelevant: the Constitution clearly allows for a motion of no confidence to be brought, and it “must follow”, Davis said, that this motion could be just as well brought by a minority party as by a majority.

In his deliberations Davis said he had leant heavily on the case of Oriani-Ambrosini v Sisulu (http://www.iol.co.za/news/politics/clarity-on-rules-for-bills-welcomed-1.1401983#.UK5Ng-Q3sud). This was the case brought by IFP MP Mario Oriani-Ambrosini to contest the fact that previously, MPs seeking to introduce legislation had to obtain permission from the house. In October this year, the Constitutional Court ruled that the permission requirement “negated the exercise of the members’ power to initiate, prepare, and introduce legislation in the NA” [National Assembly]. As a result of the ruling, it is now possible for MPs to submit private members’ bills without consent. Speaking after Davis’s ruling on Thursday, Mazibuko paid tribute to Ambrosini for bringing the case and achieving a “landmark ruling”.

The implications of this judgement were clear, Davis said: that all had the right to be heard in the National Assembly, regardless of whether their political parties controlled a majority or minority share. As such, he found, the majority cannot subvert the right of a minority to have a debate. Davis said that the public in effect own parliament: “we have the right to know and hear what our representatives have to say on a matter of such excruciating importance”.

But Davis said that he also resented the increasing politicisation of the judiciary. “Courts do not run the country; they are there to police constitutional boundaries,” he said. He warned against the dangers of drawing judges into political disputes and asking them to overreach their powers, saying that it was not up to him to dictate to Parliament on its business. Davis said that it was clear that there were gaps in the National Assembly rules on what to do to break a deadlock on the matter, but said that this lacuna was not one that his court could fill.

In conclusion, Davis ruled that the opposition parties had the right to bring a motion of no confidence, and that the motion should be treated as urgent because it was a matter of extreme national importance. Time should be found to have the debate, he said, and the National Assembly should determine when that time should be. He suggested that otherwise the Constitutional Court might have greater jurisdiction to determine which rules should apply.

Speaking on the steps of the High Court afterwards, all the political parties seemed reasonably satisfied with the ruling. Although the victory was ultimately to the ANC in terms of preventing the debate from happening that afternoon, the DA said that if it decided to take the matter to the Constitutional Court, it had a “very firm grounding”.

“We feel vindicated by the fact that Judge Davis has emphasised the fact that the majority party, whether it’s the ANC or any other political party, cannot be allowed to prevent any member of parliament from exercising their constitutional right,” said Mazibuko. “We had a right to bring a motion of no confidence to the National Assembly, and we had a right to have it heard and debated.”

Mazibuko said the DA would be giving urgent attention to the gap in parliamentary rules identified by Davis, and would be discussing the possibility of taking the matter to the Constitutional Court.

Mazibuko also defended the opposition parties’ actions in bringing the matter to the court. “I agree that the courts are not the arbiters of South African society,” she said. “We are bringing this as a last resort. It was not a step taken casually or lightly, and we feel perfectly vindicated in that.”

For his part, Lekota indicated that Cope was still keen to have the debate take place within the parliamentary year. “There are provisions in the Constitution for parliament to be recalled in times of extreme urgency, and we believe this is a matter of extreme urgency,” he said.

Despite the ANC’s stated willingness to debate the motion of no confidence in February next year, its official statement on the ruling continued to dismiss the idea as trivial – even though Dennis Davis ruled pretty much the exact opposite. “We are still firm in our view that the motion by these parties is thick on generalised allegations and hogwash but thin on fact, which makes it frivolous and not worthy of urgent consideration by Parliament. Similarly, their application was vexatious and a waste of the court’s time,” the statement read.

It remains to be seen whether the DA decides to pursue further legal avenues. But one thing is clear: on Thursday, the court upheld the independence of the three arms of government. Whichever side you come down on with regards to the no confidence motion, the ruling has to be, objectively, good news. DM

Photo: South African ruling party ANC (African National Congress) members applaude their president Jacob Zuma (C) as he receives their nomination during a special session to formally elect the country’s president in Parliament in Cape Town, May 6, 2009. South Africa’s parliament chose Zuma as president on Wednesday and he immediately set boosting the economy and creating jobs as priorities. REUTERS/Gianluigi Guercia