Lenasia evictions and demolitions will continue… But are they legal? 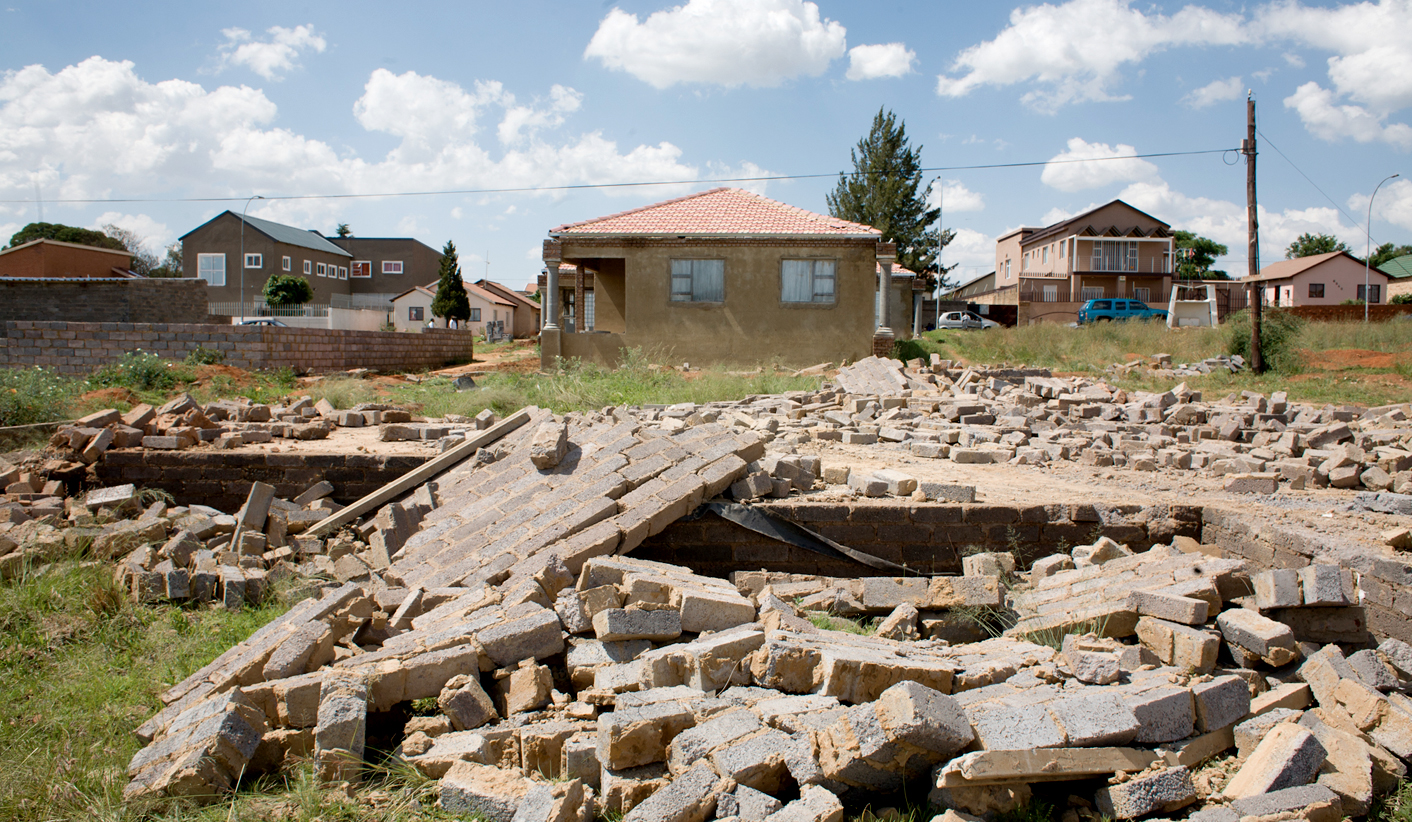 More than 80 houses have been demolished in Lenasia and hundreds more Gauteng residents appear to be facing a similar demolitions. GREG NICOLSON examines the morality of the government taking back land illegally sold by corrupt officials.

Six hundred residents in Debonair Park have been given until 30 November by the Ensuleni Municipality to leave their land, which the council says was purchased illegally.

Speaking to the Daily Maverick, a homeowner who didn’t want to be named said a notice of eviction has been circulating in the area after a March court order was issued allowing the government to demolish homes built on illegally sold land. The resident said she bought her stand from the municipal offices for R20,000 and started building in 2010. Residents who bought the land from corrupt municipal officials received receipts but not title deeds, said the source.

The community wants the chance to buy their plots from the municipality but have been told everyone will be evicted. “They are saying we are not selling the stands, we want to evict everyone before we sell the place,” said the resident. The Daily Maverick was not able to get confirmation of the planned evictions from Ensuleni Municipality before deadline but the council is said to have spoken openly about the issue.

The plights of the Debonair Park and Lenasia residents are almost identical. Both groups face eviction without compensation for purchasing and building on land sold by corrupt officials and their syndicates. In both cases the state wants to demolish their houses and has not been open to continued occupancy.

But is it legal to demolish their houses and to what extent do recent rulings affect the issue?

Lawyers for Human Rights attorney Nathania Jacobs has worked on a number of seminal cases regarding housing evictions and demolitions, having represented occupiers of Schubart Park, as well as residents of Itireleng forcibly removed the Skurweplaas and Mooiplaas farms. Jacobs agreed that, despite an increase in publicity on the matter and landmark rulings establishing a clear precedent, government still appears to act first and wait for later litigation. “It’s a concerning trend,” she said. “The government knows better now.”

“Usually, if you have an eviction you need to provide alternative accommodation,” said Jacobs. After the Constitutional Court ruling on the Schubart Park matter that “has really been crystalised,” she added.

The matter between the Schubart Park Residents’ Association and the City of Tshwane made it to the Constitutional Court after residents of the decrepit Pretoria housing towers were locked out by police when a fire started during protests over service delivery. In his judgment, presiding Judge Johan Froneman accepted an earlier order “that the removal of the residents was not a lawful eviction; that the removal was instead temporarily necessary in order to save lives; that the residents were entitled to re-occupation once it was safe to do so.”

The court took issue with the city’s offer of take-it-or-leave it alternative accommodation and the fact that if residents could not reoccupy Schubart Park they would effectively have been evicted without a court order.

Section 26(3) of the Constitution states, “No one may be evicted from their home, or have their home demolished, without an order of court made after considering all the relevant circumstances. No legislation may permit arbitrary evictions.” The court suggested the City of Tshwane violated this right and neglected its duty towards the poor. The residents must be able to go back to their homes as soon as possible, it ordered, and alternative accommodation for all must be provided.

The Constitutional Court made the responsibilities of municipalities just as clear in the case of the Itireleng evictions. The two communities had been forcibly removed after the settlements had overflowed onto private farms and courts granted eviction orders. But in both the Skurweplaas and Mooiplaas cases the court found that the City of Tshwane had to provide alternative accommodation because it had the capacity and because of the large-scale homelessness that evictions would have caused.

Are these cases relevant to the Lenasia evictions and demolitions?

“This is a very special case,” said Stuart Wilson, a co-founder of the Socio-Economic Rights Institute of South Africa who has represented occupiers in a number of eviction cases. “This kind of fraud may go on very regularly but it’s the first case I’m aware of that the government has sought to evict people that it has allowed to allocate land to.”

The most common cases of eviction relate to the state or private landowners evicting people who will then become homeless. “It’s a completely different case to the run-of-the-mill eviction. The run-of-the-mill eviction is when people are removed from the land and have nowhere else to go… I don’t know what these guys’ social circumstances are but the fact they built houses suggests that they are not the poor of the poor.”

Wilson said that because the province has a court order to evict it is within its rights to demolish houses in Lenasia. “Generally speaking a court shouldn’t grant an order that will lead to homelessness but the way to overcome that is to appeal.”

The affected community in Lenasia began their appeal process but later withdraw the application to engage in discussions with former MEC Humphrey Mmemezi. The department says the land occupiers then negotiated in bad faith by continuing to build despite their agreement to cease construction.

Wilson said that although the department seems to be acting within its rights, he believes the demolitions are “certainly immoral”.

“People took advantage (of the corrupt and fraudulent sale of land) presumably in good faith. It was sold to them and they built on it because they had a little bit of money to build their own houses. It’s a little bit much to say they are acting in bad faith to keep on building. Where did the bad faith start?

“It’s also possible residents could have argued their evictions couldn’t be just and equitable because they honestly believe they had the right to build houses and occupy them,” said Stewart.

He added that a judge might rule in favour of the occupants if there are special circumstances, such as risk of homelessness, and consider the fact that the provincial department failed to prevent the corrupt sale of land by its own employees.

It is the failure of government oversight  that has turned public sentiment against the evictions and demolitions.

“We have established that houses that were demolished in Ennerdale were not ‘opportunistic structures’ to undermine the court process, but houses that people were already living in, completed or were still under construction long before the SAHRC brought the urgent court application,” said the Gauteng SACP, Cosatu, and Sanco in a joint statement on Tuesday. “We support the residents to demonstrate their commitment to the rule of law and to tell their story in a proper forum. We also believe that government must find measures to protect state property proactively to avoid the recurrence of these most backward methods that bear resemblance to the old Apartheid tactics.”

Not only do the demolitions look like “Apartheid tactics” but they stem from failures within government.

“The problem is it was the government’s fault that those people built those houses in the first place. If these guys came and occupied the land and built their houses with no permission it would be different, but the provincial government was responsible for the fraud committed but it didn’t stop its own people from selling land illegally. It’s a bit rich to say we now need this land for other people when you didn’t stop these people moving in in the first place,” said Wilson.

Fighting the court orders, however, may prove difficult. The Gauteng department of local government and housing is certain it is acting within its rights in Lenasia. It seems residents will need to prove in court that they honestly thought they owned the land and there is a risk of homelessness if they are evicted. Whatever happens, we will see the government attempt more demolitions. The resulting court cases will determine how the future will look, but it may be terribly bleak for many families.DM

Photo: Demolished in Lenasia South Extension 4 lies the home of Richard Baloyi. Residents crowded into Baloyi’s house to protect it from demolition, but other Lenasia residents weren’t able to resist the oncoming demolition. (Greg Nicolson)