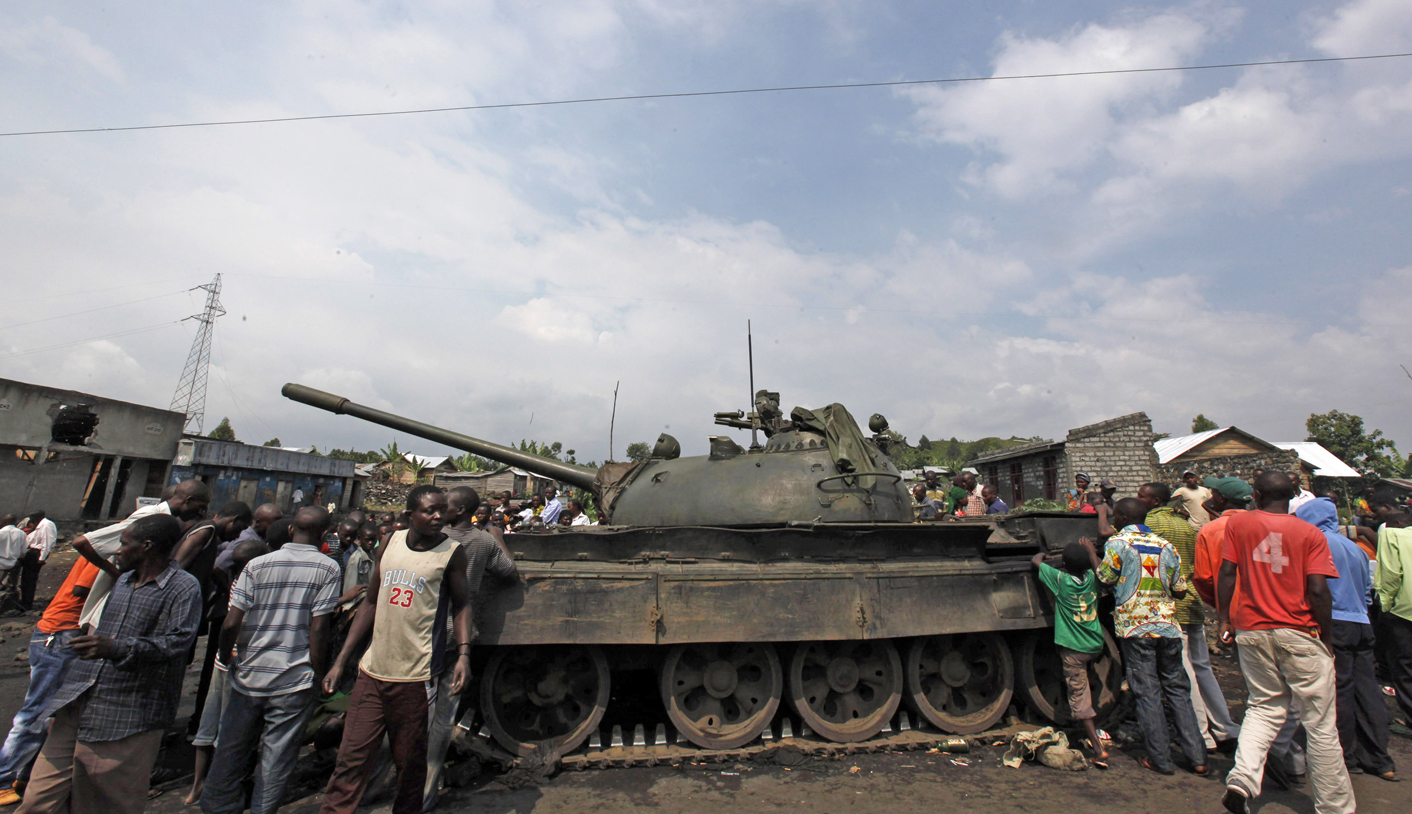 Rebel forces in eastern Congo vowed on Wednesday to "liberate" all of the vast central African country as they began seizing towns near the Rwandan border and spoke of a 1,000-mile march to the capital Kinshasa. By Jonny Hogg.

SAKE/GOMA, DRC (Reuters) The M23 rebels, widely believed to be backed by Rwanda, captured the eastern city of Goma on Tuesday, a provincial capital home to a million people; United Nations peacekeepers simply looked on, after Congolese troops had quit the town.

Regional leaders called on the rebels to halt their advance and Congo’s President Joseph Kabila appeared to soften his stand on Wednesday, saying he would look in to rebel grievances as the insurgents extended their reach.

“The journey to liberate Congo has started now,” Vianney Kazarama, spokesman for the rebel group, told a crowd of more than 1,000 at a stadium in Goma. “We’re going to move on to Bukavu, and then to Kinshasa. Are you ready to join us?

Hours later, a rebel unit took control of Sake, a strategic town near Goma on the road running the length of Lake Kivu to Bukavu, 100 km (60 miles) away. In the 1990s, the current president’s father burst out of the same area at the head of a rebel force to overthrow Mobutu Sese Seko.

A Reuters correspondent in Sake saw heavily armed rebels in control of the town and no sign of fighting. The bodies of four uniformed men and one in civilian clothing lay by the road. Locals inspected shelled buildings, burned out cars and a tank abandoned by the Kinshasa government’s FARDC army.

The government in Kinshasa issued a statement on Wednesday admitting it had lost the battle but pledging to win the war: “Victory will be ours. That is what the Congolese want.”

The rebels accuse Kabila of failing to grant them posts in the army in line with a peace deal that ended a previous revolt in 2009. The current rebellion also reflects local ethnic tensions, intertwined with Rwanda’s desire for influence over a neighbouring region rich in minerals.

Rwanda previously backed the insurgency that swept Kabila’s father, Laurent, to power in 1996 after a march across Congo to oust Mobutu, veteran dictator of a country then known as Zaire.

The new fighting has aggravated tensions between Congo and Rwanda, which the Congolese government says is orchestrating the insurgency as a means of grabbing resources, which include diamonds, gold and coltan, an ore of rare metals used in electronics and high-tech materials.

U.N. experts have backed Congo’s accusations – implicating Rwanda’s defence minister. The government in Kigali denies the charges and says Kinshasa and world powers have failed to address the root causes of years of conflict in the region.

African foreign ministers urged the African Union to deploy troops to halt the rebels and Kabila, Kagame and Museveni ordered the rebels to halt their advance.

After refusing any form of dialogue with the rebels, Kabila said he would evaluate the causes of the conflict but gave no further details on possible talks.

But there are signs of trouble for Kabila already spreading in the country the size of western Europe.

A Reuters reporter saw hundreds of young men with sticks sack the headquarters of Kabila’s PPRD party in Bukavu, in protest at the Congolese government’s failure to defend Goma.

Goma itself was quiet on Wednesday but at the rebel rally in the stadium, dozens of members of the security forces who had not fled the city appeared to have joined the insurgents.

“Its a problem of governance; there’s no food, there’s no money,” Rashidi Benshulungu, a captain in military intelligence who had changed sides, told Reuters. “I’m not a politician, that’s a problem for Kabila. But we’re following the ARC,” he added, using an acronym used by the M23’s combat force.

While regional mediator Uganda brokered talks between Congo and Rwanda, whose armies have repeatedly clashed during nearly two decades of on-off conflict around the Great Lakes, the U.N. Security Council ordered the rebels to withdraw and disband.

A statement expressed “deep concern at reports indicating that external support continues to be provided to the M23, including through troop reinforcement, tactical advice and the supply of equipment, causing a significant increase of the military abilities of the M23”. It “demands that any and all outside support to the M23 cease immediately”.

The French government also expressed frustration with the U.N. peacekeepers, from India, South Africa and Uruguay, who gave up defending the city after Congo’s army retreated. Paris called it “absurd” that the U.N. force did not protect Goma.

But the U.N. mission defended its failed effort to protect the town, saying its forces had fired hundreds of rockets at the rebels but were overwhelmed when the number of rebels attacking the town jumped from 500 to 3,000 in the space of 48 hours.

The mission stopped short of blaming outside support but is likely to add to accusations levelled at Rwanda.

While conflict has simmered almost constantly in Congo’s east in recent years, this is the first time Goma has fallen to rebels since foreign occupying armies officially pulled out under peace deals at the end of the most recent 1998-2003 war.

Aid agencies have estimated that 5 million people have died from fighting and conflict-related disease since that war began. Tens of thousands of people have already fled days of fighting between the rebels and the U.N.-backed Congolese soldiers.

“We’re starving, we fled the fighting, and when we came back all of our things had been pillaged, but we don’t know by who,” said a Goma resident who gave his name only as Zachary.

New York-based Human Rights Watch said at least 11 civilians had been killed in the latest fighting for Goma.

In Sake, 25 km (15 miles) west of Goma, local people said Congolese troops had briefly regrouped there before pulling out again before the rebels drove in on Wednesday.

Rwanda’s foreign minister said the fall of Goma had shown there was no military solution to the crisis, so Kinshasa had to seek the path of dialogue.

As a result, Kabila faces the tricky choice between dialogue with the rebels, which will be politically unpopular, and trying to rally his scattered forces in North Kivu province.

He had been praised for securing peace deals that ended the last war but his re-election late last year provoked demonstrations by many frustrated with the slow pace of change.

Expectations in Goma are low: “You know, we don’t have a choice. We’ve come here to welcome them,” said Blaise Ciza, a Goma resident who attended the rebel rally at the stadium.

“But one thing that’s impressed us is they didn’t kill lots of people when they took the town. Last night we were scared but it remained calm. We congratulate them for that.” DM

Photo: People gather around a tank abandoned by fleeing Congolese army in Ndosho near Goma November 21, 2012. Foreign ministers from nine African countries on Wednesday urged other nations on the continent to contribute troops to an international force to fight rebels in the Democratic Republic of Congo’s turbulent east, a Ugandan government spokesman said. The plea – which comes at a time when the M23 rebels appear to have the Congolese army on the backfoot – was signed by Congo, Rwanda, Uganda, Burundi, Tanzania, Kenya, Sudan, Congo Republic and Zambia. REUTERS/ James Akena