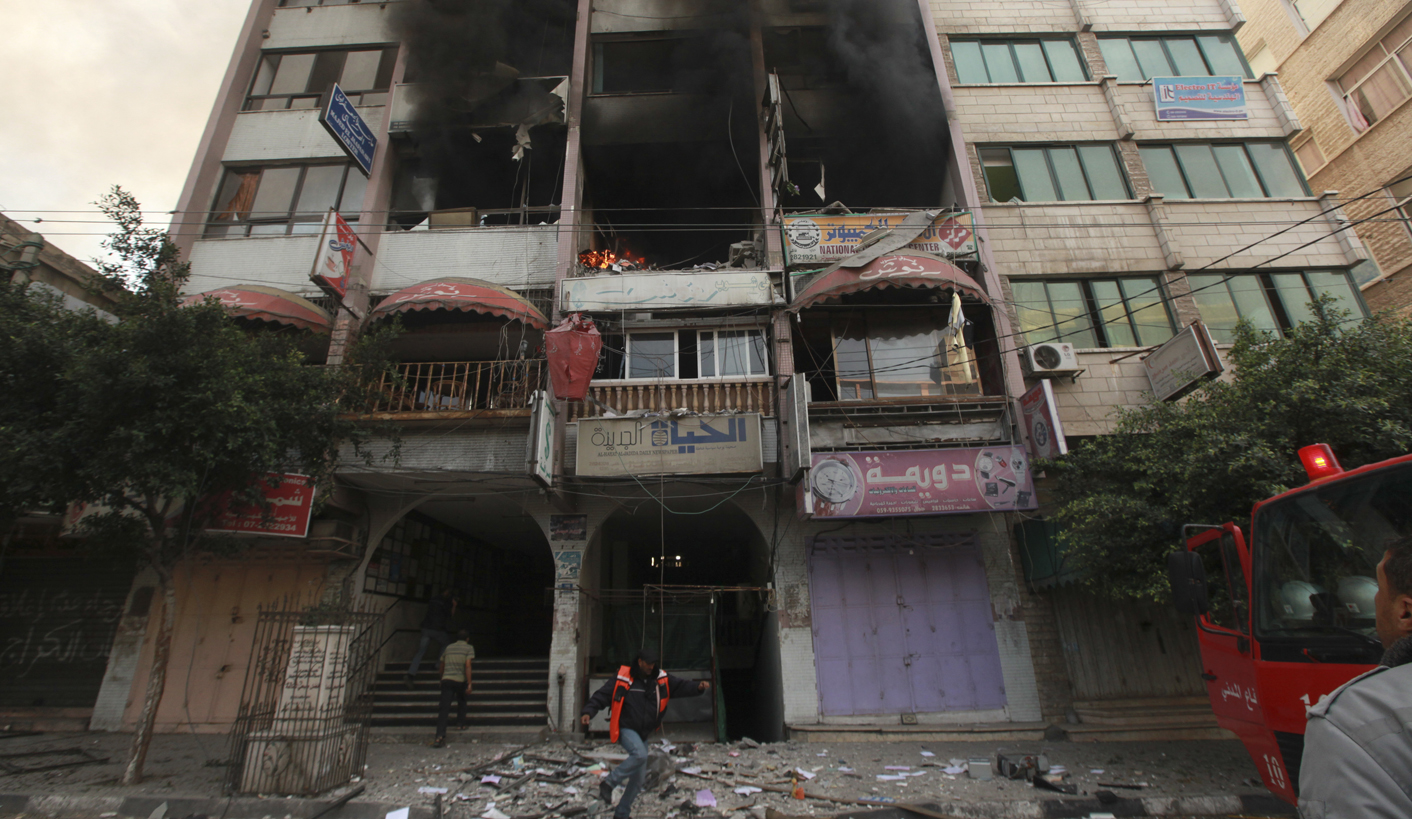 Israel bombed dozens more targets in the Gaza Strip on Monday and said that, while it was prepared to step up its offensive by sending in troops, it preferred a diplomatic solution that would end Palestinian rocket fire. By Nidal al-Mughrabi and Jeffrey Heller.

Egypt said a deal for a truce could be close, though by late evening there was no end to six days of heavy missile exchanges as Israeli Prime Minister Benjamin Netanyahu discussed his next steps with his inner circle of senior ministers.

U.S. President Barack Obama called Egypt’s President Mohamed Mursi, who has been trying to use his influence with Hamas, his fellow Islamists who run Gaza, to broker a halt. Obama “underscored the necessity of Hamas ending rocket fire”, the White House said.

The leader of Hamas, speaking in Cairo, said it was up to Israel to end a new conflict that he said it had started. Israel, which assassinated a Hamas military chief on Wednesday, says its air strikes are to halt Palestinian rocket attacks.

To Mursi and in a subsequent call to Netanyahu, Obama said he regretted the deaths of Israeli and Palestinian civilians.

Israeli attacks on the sixth day of fighting raised the number of Palestinian dead to 101, the Hamas-run Health Ministry said, listing 24 children among them. Subsequent deaths raised the toll in Gaza to 106. Hospital officials in the enclave said more than half of those killed were non-combatants. Three Israeli civilians died on Thursday in a rocket strike.

U.N. Secretary-General Ban Ki-moon, touring the region in the hopes of helping to broker a peace deal, arrived in Cairo, where he met Egypt’s foreign minister in preparation for talks with Mursi on Tuesday. He also plans to meet Netanyahu in Jerusalem.

With the power balances of the Middle East drastically reshaped by the Arab Spring during a first Obama term that began two days after Israel ended its last major Gaza offensive, the newly re-elected U.S. president faces testing choices to achieve Washington’s hopes for peace and stability across the region.

Militants in the Gaza Strip fired 110 rockets at southern Israel on Monday, causing no casualties, police said. Israel said it had conducted 80 air strikes on the enclave. The figures meant a relative easing in ferocity – over 1,000 rockets have been fired in the six days, and 1,350 air strikes carried out.

For the second straight day, Israeli missiles blasted a tower block in the city of Gaza housing international media. Two people were killed there, one of them an Islamic Jihad militant.

Khaled Meshaal, exile leader of Hamas, said a truce was possible but the Islamist group, in charge of the Gaza Strip since 2007, would not accept Israeli demands and wanted Israel to halt its strikes first and lift its blockade of the enclave.

“Whoever started the war must end it,” he told a news conference in Cairo, adding that Netanyahu, who faces an election in January, had asked for a truce, an assertion a senior Israeli official described as untrue.

Meshaal said Netanyahu feared the domestic consequences of a “land war” of the kind Israel launched four years ago: “He can do it, but he knows that it will not be a picnic and that it could be his political death and cost him the elections.”

For Israel, Vice Prime Minister Moshe Yaalon has said that “if there is quiet in the south and no rockets and missiles are fired at Israel’s citizens, nor terrorist attacks engineered from the Gaza Strip, we will not attack”.

Yaalon also said Israel wanted an end to guerrilla activity by militants from Gaza in the neighbouring Egyptian Sinai peninsula.

Although 84 percent of Israelis support the current Gaza assault, according to a poll by Israel’s Haaretz newspaper, only 30 percent want an invasion.

“Israel is prepared and has taken steps, and is ready for a ground incursion which will deal severely with the Hamas military machine,” an official close to Netanyahu told Reuters.

“We would prefer to see a diplomatic solution that would guarantee the peace for Israel’s population in the south. If that is possible, then a ground operation would no longer be required. If diplomacy fails, we may well have no alternative but to send in ground forces,” he added.

Egypt, where Mursi has his roots in Hamas’s spiritual mentors the Muslim Brotherhood, is acting as a mediator in the biggest test yet of Cairo’s 1979 peace treaty with Israel since the fall of Hosni Mubarak early last year.

“I think we are close, but the nature of this kind of negotiation, (means) it is very difficult to predict,” Egyptian Prime Minister Hisham Kandil, who visited Gaza on Friday in a show of support for its people, said in an interview in Cairo for the Reuters Middle East Investment Summit.

Egypt has been hosting leaders of both Hamas and Islamic Jihad, a smaller armed faction.

Israeli media said a delegation from Israel had also been to Cairo for truce talks. A spokesman for Netanyahu’s government declined comment on the matter.

Egypt’s foreign minister, who met U.N. chief Ban on Monday, is expected to visit Gaza on Tuesday with a delegation of Arab ministers.

Thousands turned out on Gaza’s streets to mourn four children and five women who were among 11 people killed in an Israeli air strike that flattened a three-storey home the previous day.

The bodies were wrapped in Palestinian and Hamas flags. Echoes of explosions mixed with cries of grief and defiant chants of “God is greatest!”.

Those deaths drew more international calls for an end to hostilities and could test Western support for an offensive that Israel billed as self-defence after years of cross-border rocket attacks.

Israel said it was investigating the strike that brought the home crashing down on the al-Dalu family, where the dead spanned four generations. Some Israeli newspapers said the house might have been targeted by mistake.

In scenes recalling Israel’s 2008-2009 winter invasion of the coastal enclave, tanks, artillery and infantry have massed in field encampments along the sandy, fenced-off border.

Israel has also authorised the call-up of 75,000 military reservists, so far mobilising around half that number.

The Gaza fighting adds to worries of world powers watching an already combustible region, where several Arab autocrats have been toppled in popular revolts in the past two years and a civil war in Syria threatens to spread beyond its borders.

In the absence of any prospect of permanent peace between Israel and Islamist factions such as Hamas, mediated deals for each to hold fire unilaterally have been the only formula for stemming bloodshed in the past.

Hamas and other groups in Gaza are sworn enemies of the Jewish state, which they refuse to recognise and seek to eradicate, claiming all Israeli territory as rightfully theirs.

Hamas won legislative elections in the Palestinian Territories in 2006. A year later, after the collapse of a unity government under President Mahmoud Abbas, it seized Gaza in a brief civil war with Abbas’s forces. DM

Photo: A member of civil defence inspects the damage after an Israeli air strike, witnessed by a Reuters journalist, on a floor in a building that also houses media offices in Gaza City November 19, 2012. Egypt’s prime minister said on Monday that an agreement brokered by Cairo to stop the fighting between Israel and the Palestinians in Gaza could be close. REUTERS/Mohammed Salem