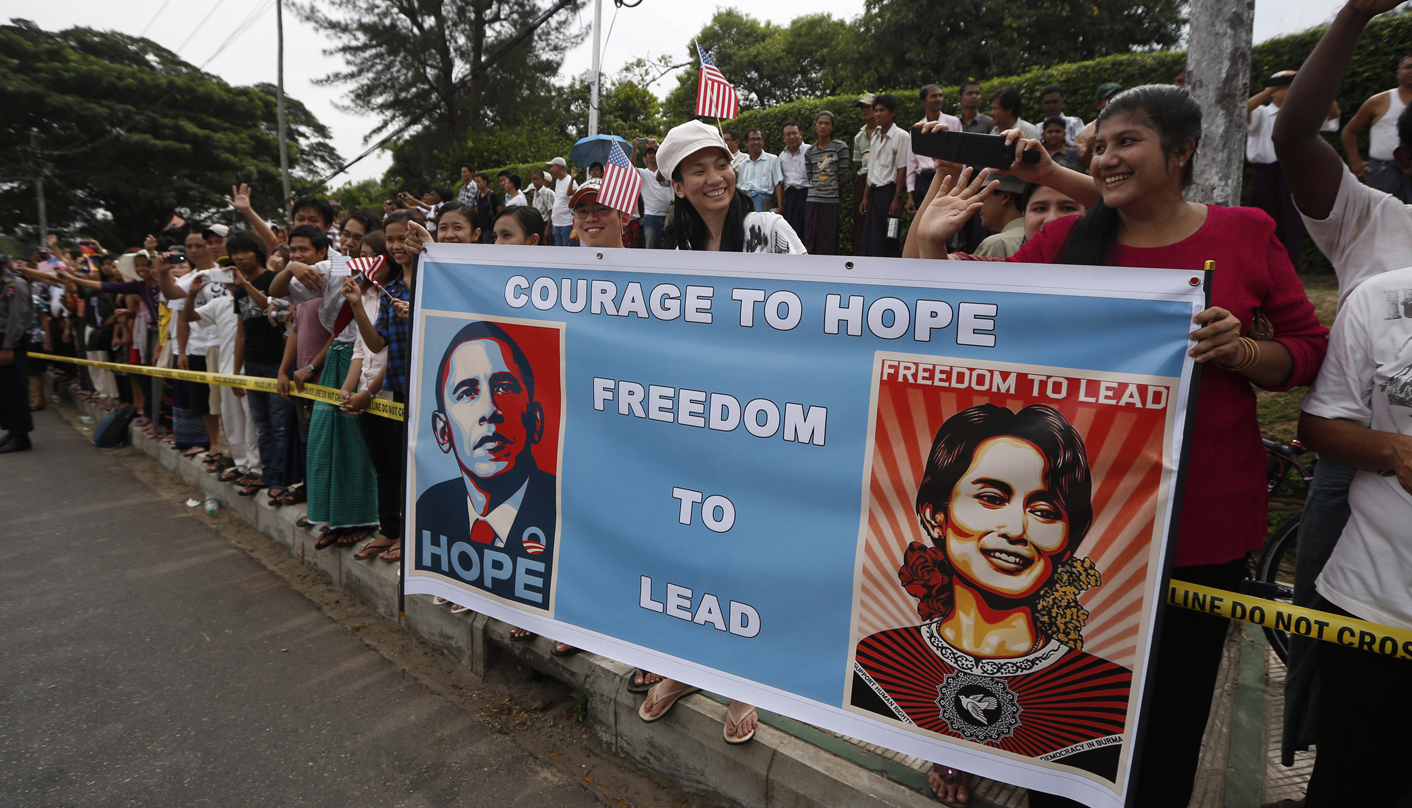 It won't be mistaken for a Nixon-goes-to-China kind of moment. But President Barack Obama's visit to Myanmar on Monday sometimes felt like a return to an earlier era of presidential diplomacy - and his aides were determined to make sure that no one missed its historic significance. By Matt Spetalnick.

YANGON, Nov 19 (Reuters) – The trip was carefully choreographed to highlight what the White House sees as a first-term foreign policy success for a newly re-elected president whose record on the world stage shows few triumphs so far.

There was the cautious first meeting with reformist President Thein Sein to keep him on track, landmark talks with opposition leader Aung San Suu Kyi and a speech to the Burmese people at a university steeped in the country’s turbulent political history.

But there were also a few unscripted parts that underscored how strange it was for Obama to be feted by cheering crowds lining the streets of Yangon little more than a year after ordering aides to explore rapprochement with the long-shunned Southeast Asian country after decades of military rule.

On the fly, Obama decided to make an unscheduled stop at the Shwedagon Pagoda, where he, Secretary of State Hillary Clinton and their entire entourage went barefoot as part of Buddhist tradition at the revered shrine.

Even Obama’s Secret Service agents were left scurrying shoeless and sockless, talking quietly into their radios, as they secured the area.

The road to Suu Kyi’s lakeside villa, where she was kept under house arrest by the country’s military rulers for much of two decades until her release in 2010, took Obama through a decaying but bustling city still bearing the marks of its British colonial past.

Strangely, Obama – in his statement to reporters after their meeting in which he hailed Suu Kyi for her heroism – mispronounced her name at least twice. And there was another awkward moment at the end when he embraced and kissed the devout Buddhist, leaving her visibly uncomfortable.

Obama also took a linguistic leap when – after his talks with Thein Sein – he referred, once, to the country as Myanmar, the name the former ruling junta changed to years ago. Obama aide Ben Rhodes said it was done as a “diplomatic courtesy” and that U.S. government policy was still to refer to it as Burma.

At times, it felt like the White House and its sometimes-pampered press corps had stepped into a time warp.

Cellphones and BlackBerrys usually humming at all hours back in Washington went strangely silent for the most part in Myanmar, where sanctions that have only recently been eased have kept mobile telecommunications from developing very far.

Obama’s six-hour visit – part of a three-country Asian tour – had been in the planning stages for months, a trip he would have taken, win or lose the Nov. 6 election.

The fact that he won gave him a chance to tout his success in pushing Myanmar’s generals onto the path of democratic reform as he starts to build a presidential legacy.

He went ahead despite objections from international human rights groups that it was too soon, despite a looming fiscal showdown in Washington, despite the eruption of an Israel-Hamas conflict in the Gaza Strip.

The visit was part of a shift in the U.S. strategic focus – the so-called “Asia pivot” – by which Washington aims to advance diplomatic and economic relations in the region, in part to counter China’s rising influence.

But it was also a chance for Obama, America’s first black president who has met historians and scholars to ponder the historical dimensions of his tenure, to make a bit of history.

The visit, in some ways, brought Obama full circle from his Nobel Peace Prize acceptance speech in 2009 when he spoke of “repression in Burma” in the same breath as “genocide in Darfur” and “systematic rape in Congo”.

How big of a moment it is historically is open for debate. After all, British Prime Minister David Cameron, South Korea President Lee Myung-bak and Indian Prime Minister Manmohan Singh had already visited.

It certainly won’t rank up there with the breakthrough that President Richard Nixon scored with his visit to communist China in 1972 that ended decades of estrangement between Washington and Beijing.

But if the reforms stick, Obama can expect high marks for the opening to Myanmar.

It is a country where democratic processes are so new that Clinton, during her visit last year, was told that lawmakers were trying to teach themselves how to behave by watching old episodes of “The West Wing,” a fictional U.S. television series about presidential politics.

As he wrapped up his trip, Obama gave his own civics lesson, telling an attentive but politely quiet audience at Yangon University how Congress acts as a check and balance on his presidential power.

“As President, I cannot just impose my will on Congress,” he said. “… even though sometimes I wish I could.” DM

Photo: Crowds line a street outside the home of Myanmar’s opposition leader Aung San Suu Kyi as U.S. President Barack Obama arrives to meet her in Yangon November 19, 2012. Obama became the first serving U.S. president to visit Myanmar on Monday, trying during a whirlwind six-hour trip to strike a balance between praising the government’s progress in shaking off military rule and pressing for more reform. REUTERS/Jason Reed.