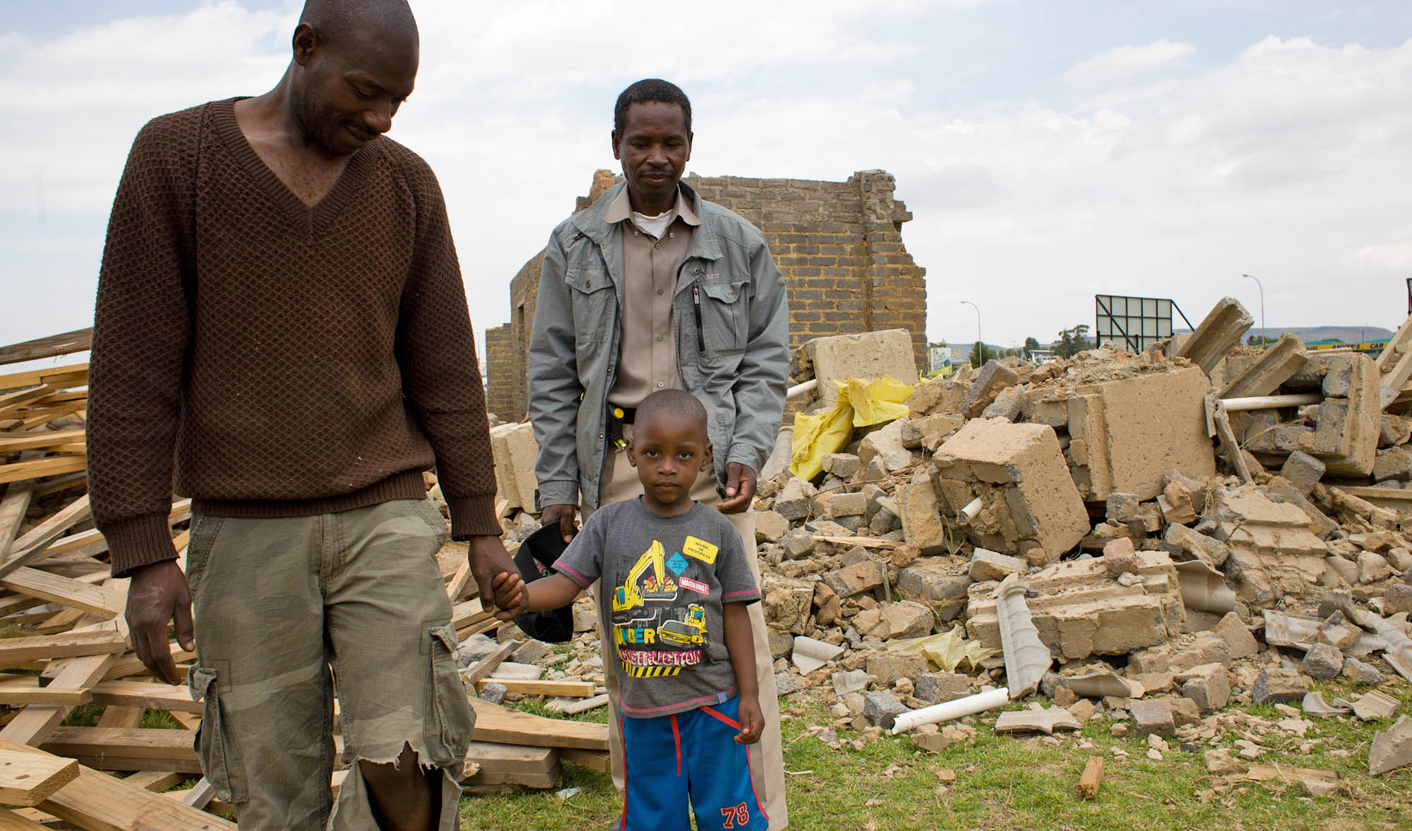 On Monday, Lenasia residents welcomed the 24-hour interdict preventing the Gauteng Department of Local Government and Housing from demolishing another 62 homes. Families who have lost their homes hope public pressure will lead to compensation and alternative accommodation. For now, though, they just want a roof over their heads. By GREG NICOLSON.

Samson Ngubeni and his son Sipho share the same birthday, 10 November. They planned a party at their adjoining Lenasia houses to celebrate turning 52 and 30. A few friends were invited, but the attendance list was already lengthy. Samson lived with his wife, two other children, brother in-law, grandson and friend in one house. Next door, Sipho lived with four others. The party was planned for Saturday, but on Thursday their homes were the first of 51 to be demolished in the area.

Photo: After the demolitions some building materials were stolen as Lenasia residents came to terms with losing their homes. Here, friends of a homeowner help salvage what’s left.

Gauteng Premier Nomvula Mokonyane said Monday that five people are on trial for selling land illegally in Lenasia. Her comments followed an order by the South Gauteng High Court forcing the provincial Department of Local Government and Housing to suspend the demolition of 62 more structures.

Bulldozers destroyed homes across Lenasia last week when the department decided to act on a 2011 court order allowing them to demolish structures built on the land sold by corrupt government officials or agents lying about having connections with the department. The sight of a mother carrying her baby as she was dragged crying from her house has since commanded public attention and brought a number of groups to Lenasia on Monday.

The Ngubeni family stood watching their pile of bricks and timber while other residents listened to the visitors. Samson bought the two plots years ago for R35,000 each and has since spent hundreds of thousands constructing the two houses. He was waiting to have water and electricity installed. The department told him to stop building in 2009 and recently he heard talk of demolitions, but he never expected them to arrive with police on Thursday and tell the family to remove their furniture. The family is now staying with friends across Lenasia and Soweto. One of their boys is staying in a shack next to the rubble. He didn’t go to school on Monday.

While houses across Lenasia have been demolished or partly demolished, residents welcomed news that the South African Human Rights Commission (SAHRC) won a 24-hour interdict against further demolitions. Around 20 SAHRC members were in Lenasia collecting details of those affected to take back to court Tuesday.

It’s too late for the Zwane family. Maureen, 49, her daughter Vivian, 23, and Manqoba, 2, stopped as they walked past Samson Ngubeni’s plots. When they heard about the evictions last week they tried to rush to see what was happening. When they tried to visit a friend the police told them they would be shot if they came any further. “We are just traumatized about this,” said Vivian. “The government we voted for aren’t helping us.”

They bought their land in 2010 for R35,000 from “Richard” who said he worked for the provincial department of housing. They spent well over R70,000 building their home and had electricity and running water. It was one of those demolished last week. “How can we have electricity connected if it’s illegal?” asked Vivian.

Stand numbers in red marked the houses to be demolished. A demolished house sits next to one that was marked for destruction, but whose owner blocked the driveway with his car. Other homeowners locked themselves in their house, telling police they will have to raze it with them inside.

“We bought these lands. They didn’t even ask us if we have papers. They just came. We didn’t even know. No warning, nothing,” said the elder Zwane. “People used money to build these houses but we don’t hear anything about relocating or compensation.” Her daughter added: “What we want to see here is that we have a roof over our heads. We have right to shelter.”

The Zwane family was headed to hospital to see Maureen’s elderly mother. When she heard about the demolitions she rushed from Soweto to see her daughter and the house full of girls. The grandmother couldn’t sleep and was sweating. She couldn’t believe what was happening to her family. She had a heart attack and has since been in hospital.

After blocking the roads, other residents gathered on Monday to listen to representatives from the African National Congress Women’s League (ANCWL). Organisations such as Cosatu, the SA National Civic Organisation and the SA National NGO Coalition had already expressed concern and called for an immediate solution to the crisis. The leadership of the Johannesburg ANCWL, speaking from a bakkie, began losing the crowd in its defence of the ANC before the chairwoman stated her position. Despite saying someone who buys stolen goods is as good as the thief, she said no more houses can be demolished and people must be compensated.

Residents who spoke to Daily Maverick agreed, but many want answers as to why the demolitions happened when they did. They said they had challenged the 2011 eviction order in court, but former MEC Humphrey Mmemezi convinced them to drop the case and in January 2012 begin negotiations outside of court. They said he agreed that no houses would be demolished. Current MEC Ntombi Mekgwe, they said, ignored that agreement under pressure from local developers (the area is close to car dealerships and shops). The government maintains the land will be used for low-cost housing, and Mokonyane said the demolitions are in the interest of the poor.

Those who have their houses demolished, however, say only the black households have been targeted. Numerous residents pointed out grand homes owned by members of the Indian community, claiming they were also built on illegally purchased land but have not been earmarked for demolition. “It wouldn’t help if we were to resolve this fire to fire. We want the government to help,” said Joe Bakabo, whose fence was knocked down. “But it could be a ‘civil war’.”

Accusations that the rich were spared were widespread and residents cheered when a landowner was arrested during the day for theft under false pretences. After beginning a debate with the local ANCWL chair he alluded to the properties he owns and rents out in Lenasia. The ANCWL fetched police who subsequently arrested him on the spot. Yelling, “I haven’t had my side heard,” he was taken in the police van. Community members said he is a member of the local Indian community and owned between three and 10 houses in the area widely believed to have been purchased illegally. His wife is said to work for the municipality.

Photos: Residents complained that only the basic houses had been destroyed while those belonging to the wealthy were left untouched. This man, known as Farouk, was arrested when he suggested to local ANCWL he owned a number of properties bought on illegal land and had been renting them out. Most residents said he was a crook but connections mean he won’t be in jail long.

It was a snap assertion of law and order when residents are looking for leaders out of the crisis and culprits to blame. But for the Ngubeni and Zwane families the reprieve has come too late. Despite a string of cases ruling in favour of the rights of residents in eviction cases, the Gauteng department demolished their houses with little to no notice and no alternative accommodation. The SA Human Rights Commission returns to court on Tuesday, but the damage to many lives has already been made. DM

Main photo: The Ngubeni family owned two adjacent plots, the first to be demolished on Thursday. They say they invested hundreds of thousands of rand in the houses. Sipho, 30, his father Samson, 52, and son are now living separately across Lenasia and Soweto.