South Africa: A country in dire need of its Obama moment 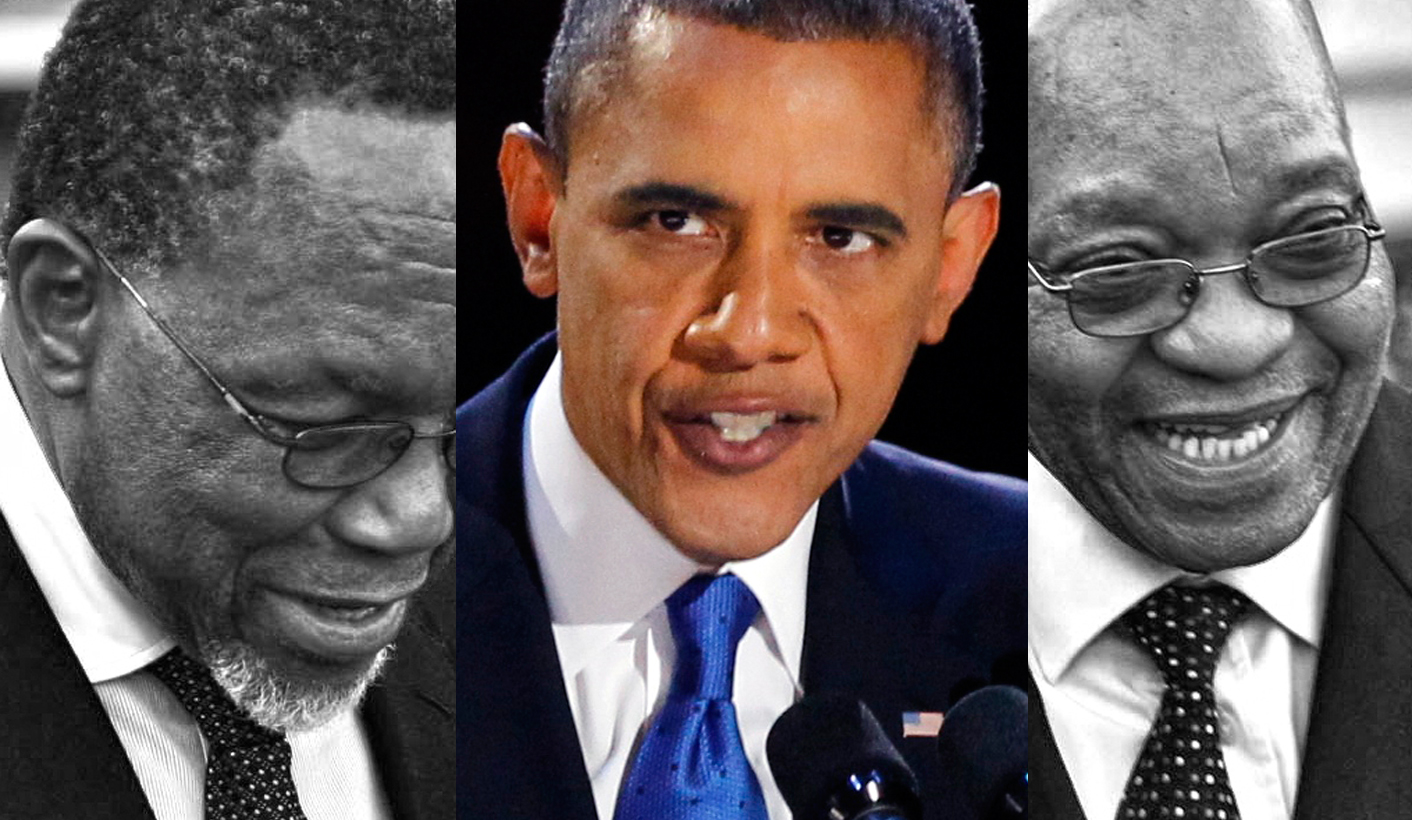 After Barack Obama’s stirring victory speech, it was perhaps unfair to look back home and expect someone, anyone, to give South Africa some inspiration too. Deputy President Kgalema Motlanthe had the opportunity on Wednesday; he didn’t exactly rise to the occasion. Meanwhile the Mangaung battle is plunging into further murkiness. By RANJENI MUNUSAMY.

For one heart-stopping moment, while answering questions in Parliament on Wednesday, it looked as if Kgalema Motlanthe was in the zone and finally ready to get in the game. Democratic Alliance parliamentary leader Lindiwe Mazibuko had laid the groundwork for him, citing instances of abuse of state power including the police action at Marikana, the National Prosecuting Authority’s (NPA) defiance of a high court order to make available the “spy tapes”, and the excessive spending on President Jacob Zuma’s private home at Nkandla.

She said there was “unparalleled abuse of the state power” under the Zuma administration and “respect for our Constitution had been eroded”. She asked whether Motlanthe thought it was justifiable to spend so much money on the private home of a sitting president.

“Will you take any steps to prevent further abuse?” Mazibuko asked Motlanthe.

“I will take steps to prevent abuse of public funds,” Motlanthe began.

Then, he could have said: I will fight for this long-suffering country of ours.

He could have said: I will not stop or rest until my task is finished.

He could have said: I will lead the people of South Africa in their quest for justice and truth.

Instead, he stopped. And didn’t say how. Or when.

He just offered a well-practised response: the Nkandla renovations are the responsibility of Public Works Minister Thulas Nxesi to clarify, he said. He added that he was also aware that the Public Protector was investigating the matter.

In that moment, he could have been a leader. He could have become a contender. Instead, he decided to retreat behind the curtain.

When asked about the spy tapes, which the DA is seeking to evaluate the basis on which the corruption charges against President Jacob Zuma was dropped, Motlanthe said if the DA felt aggrieved by the NPA’s refusal to accede to the high court order, they should seek further recourse through the courts.

Congress of the People leader Mosiuoa Lekota had earlier asked Motlanthe what was being done to protect the public from state funds being abused, following instances where members of Cabinet had done so without being arrested or funds being recovered from them. He named former Public Works Minister Gwen Mahlangu-Nkabinde for her role in the irregular police deal saga and former cooperative governance and traditional affairs minister Sicelo Shiceka (deceased) who used state funds for private overseas travel and expensive hotel stays.

Motlanthe said the Asset Forfeiture Unit had the power to confiscate possessions from ill-begotten gains. But he said he was not aware of any allegation against Mahlangu-Nkabinde of embezzlement “or helping herself to public funds”.

“If you are aware of such, a note to head of the Asset Forfeiture Unit would see to that matter. As for former minister Shiceka, may his soul rest in peace,” Motlanthe said.

Earlier in the question session, Motlanthe seemed less constrained when he spoke about the need to do away with the migrant labour system.

“If there is one good thing that must result out of this whole painful saga, it is the elimination of the migrant labour system,” he said.

Mining companies should allow workers to return to their rural homes more often instead of only once a year, Motlanthe said. The long absences caused broken homes and were detrimental to the families left behind in rural areas. He said the workers should be allowed to return home at regular intervals of not more than five to six weeks of absence.

“Therein lies the perversity of living out allowances. Rather than allowances, mining companies should be providing the workers with decent safe transport go home, to their real homes. This would address most of these challenges of informal poorly serviced settlements and the consequences of secondary homes could also be addressed,” he said.

The reason Motlanthe is uninhibited on this matter, of course, is that it is not directly related to the dynamics around the ANC’s Mangaung battle, and he understands the issues relating to mineworkers intimately as the former general secretary of the National Union of Mineworkers.

But throw anything his way that requires him to show his hand on current controversies or that tests what he would do if he were in the position to make decisions in the near future, and Motlanthe immediately recoils.

With 38 days to go before the ANC’s 53rd national conference begins, Motlanthe remains the ever-reluctant presidential candidate. Meanwhile there is a whole movement mobilised around him, with heavy campaigning in ANC structures, a new political party being registered in the event that Zuma wins a second term, and a website, Twitter and Facebook account launched by the “forces of change”.

The homepage of the website says the group is calling for change because:

South Africans do not have confidence in the leadership of President Zuma.

We need a leadership that will lead the ANC towards quality and durable change, towards an ideal as set out in the Freedom Charter, which remains its strategic vision and mission.

A leadership that will regain the confidence of all Africans on the African continent.

The site also names their slate for the top six positions, broadly the same as that of the ANC Youth League and Limpopo province: Motlanthe for president, Mathews Phosa as his deputy, Thandi Modise as national chairman, Fikile Mbalula as secretary general, Thenjiwe Mtintso as his deputy and Tokyo Sexwale as the treasurer. The site does not give details of people behind it and there are no contact details.

The campaign by shadowy figures takes the Mangaung battle to a new level of divisiveness, for which nobody will take responsibility. It is yet another consequence of the ANC’s failure to modernise and run an open and free election race, insisting on barring a transparent campaign process and preferring to make its decision in smoke-filled back rooms, away from the public.

On Wednesday morning, people of South Africa watched Barack Obama deliver a rousing address after winning another term as United States president. It was difficult not to envy the Americans, who heard their president say: “While our road has been hard, while our journey has been long, we have picked ourselves up, we have fought our way back, and we know in our hearts that for the United States of America, the best is yet to come.”

It was the mark of the man who was able to articulate his nation’s future as such:

“And tonight, despite all the hardship we’ve been through, despite all the frustrations of Washington, I’ve never been more hopeful about our future. I have never been more hopeful about America. And I ask you to sustain that hope. I’m not talking about blind optimism, the kind of hope that just ignores the enormity of the tasks ahead or the roadblocks that stand in our path. I’m not talking about the wishful idealism that allows us to just sit on the sidelines or shirk from a fight.

“I have always believed that hope is that stubborn thing inside us that insists, despite all the evidence to the contrary, that something better awaits us so long as we have the courage to keep reaching, to keep working, to keep fighting.”

In South Africa, we can only think wistfully of a time when our leaders talked with such passion about our country, when we knew who we were electing and why we were voting for them, when we could have held those in high office to account, and when we were not mostly treated as fools.

And the only thing worse than a leaderless country, is a leaderless country that once had a leader. A sincere, fearless man who was prepared to sacrifice his life for what he believed, a leader who could take a whole country from the edge of the abyss and, through sheer will power and commitment to a higher ideal, deliver hope to hungry and depraved.

That’s why watching Barack Obama on that Wednesday morning felt so painful. Our own road has been hard; our own journey has been long. We have fought our way back. We have almost managed to pick ourselves up and dust ourselves off. And yet, after a long and sometimes hopeless journey, we find ourselves in a leaderless country, where, once more, the whims of 4,500 trump the needs of 51 million.

So when we hear Barack Obama put it crisply and with true conviction, we have to ask ourselves a most painful question:

Will we ever again, deep in our hearts, know that for South Africa, the best is yet to come? DM