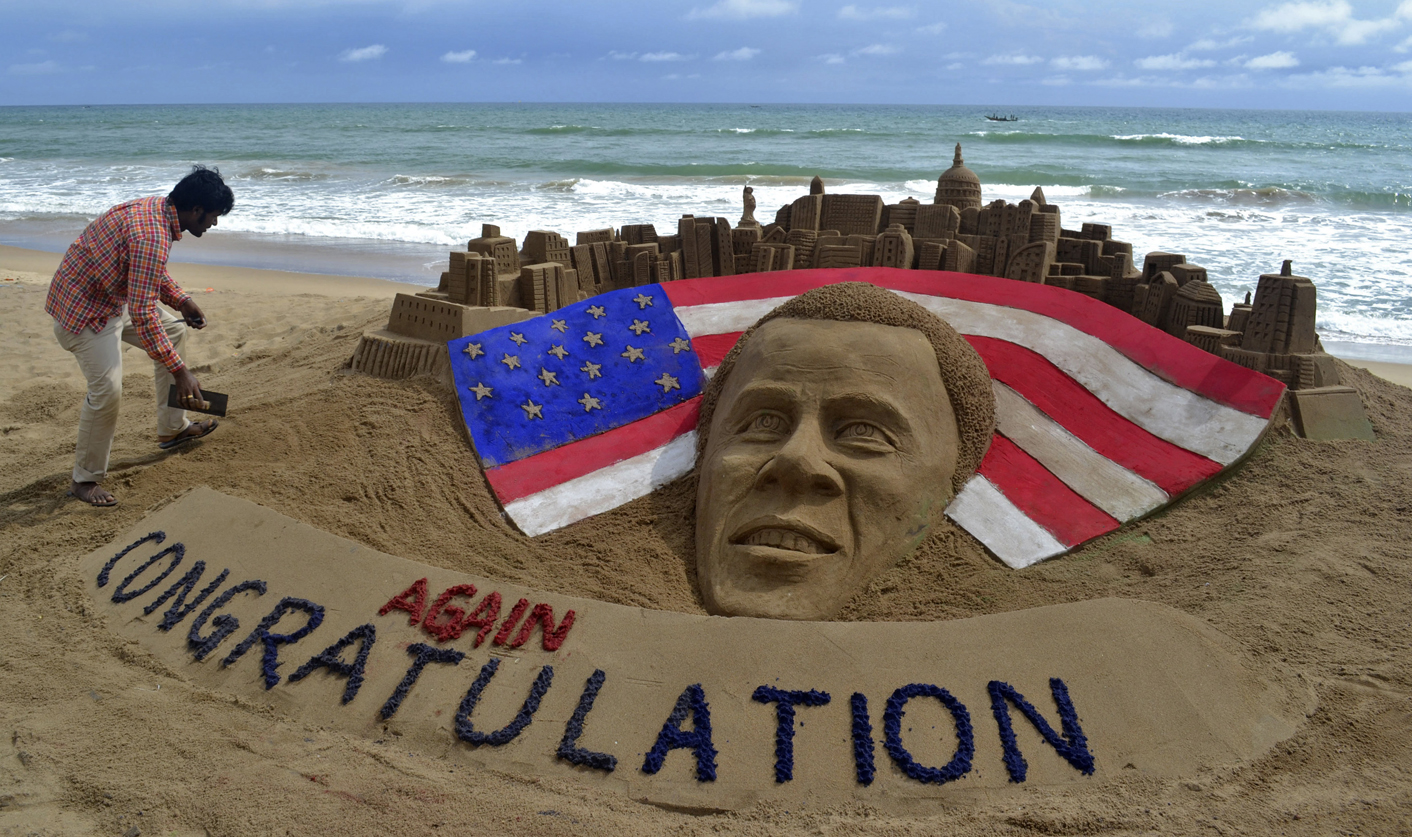 U.S. investors hit trading floors Wednesday morning with the same president and the same problems in gridlocked Washington, and expected the same solution as always to a looming budget crisis that threatens the economy: punt and deal with it later. By Rodrigo Campos and Steven C. Johnson.

President Barack Obama beat back Republican challenger Mitt Romney to win a second term, but he will still have to contend with a Republican-controlled House of Representatives that could make it hard to forge compromise on pressing issues.

The biggest of these is the coming “fiscal cliff.” Unless the White House and Congress reach a deal to cut the deficit, a $600 billion package of tax increases and spending cuts are scheduled to take effect automatically at the end of 2012, a scenario that could severely strain the economy.

The fiscal cliff is expected to be the top priority of the “lame-duck” Congress that will convene soon, though few hope for anything resembling a permanent solution to the problem.

“The best thing that could have happened is what happened,” said Robert Manning, chief executive of MFS Investment Management. “I don’t think there will be any grand bargain at all, just small fixes that will kick the can down the road.”

Markets reacted negatively, as many feared they might do if the election guaranteed further partisan rancor. The Dow Jones industrial average shed 225 points and the S&P 500 dropped 1.7 percent in early trading.

The S&P 500 had rallied 67 percent since Obama took office – one of Wall Street’s most impressive runs ever under a single president. Market veterans expect a rough end to the year, though as investors react to dueling headlines about the likelihood of a solution.

“The recent pre-election rally has reflected Wall Street predictions of an Obama victory, but positive sentiment will move to worries about the fiscal cliff and the ongoing euro zone debt crisis, resulting in market choppiness over the near term,” said Martin Sass, CEO of New York money manager MD Sass.

Steven Englander, Citigroup’s head of G10 foreign exchange strategy, agreed markets could panic toward year-end if it looks as though no deal is imminent to avoid the fiscal cliff.

If that happens, investors may think twice about purchasing U.S. government debt at low interest rates. This would strain the economy, widen the deficit, hurt the dollar and raise the possibility that major credit-rating agencies will cut the U.S. debt rating.

Standard & Poor’s stripped the U.S. of its pristine triple-A rating in 2011; the agencies have said they will evaluate budget negotiations and solutions and may take action next year.

Market strategist Jonathan Golub at UBS said officials will probably focus on avoiding the cliff, but added that trying to run from the problem will highlight the need for a “grand bargain” to fix the deficit.

Investors have had a tendency to downplay problems emanating from Washington, only to find themselves surprised when lawmakers cannot get together on critical issues.

The market reacted harshly to Washington gridlock after failed legislation to backstop the banks in 2008 and again during protracted talks to raise the U.S. debt ceiling in 2011. Oppenheimer Funds strategist Lori Heinel said daily swings of 100 to 200 points in the Dow will be common through year-end.

A re-elected Obama is expected to look for ways to avoid prolonging that kind of blowback.

“The president entered office with the economy in a recession. I don’t think he wants to preside over a recession in his second term,” said Jeff Applegate, chief investment officer at Morgan Stanley Wealth Management. “I think you have a president concerned about his legacy, and I don’t think he wants to leave his presidency with a sea of red ink.”

Hedge fund manager Whitney Tilson, one of the only managers in the $2 trillion industry to publicly endorse Obama’s reelection, said he was optimistic a compromise was possible.

“This was a victory for moderates,” he said. “I hope both parties recognize this and move toward each other – to the center – to address the pressing problems our country faces.”

Like some prominent investors, billionaire restructuring specialist Wilbur Ross told Reuters he hoped for an end to “bitter partisanship” and progress on economic growth. Others were less optimistic, such as Mortimer Zuckerman, CEO of Boston Properties and publisher of the New York Daily News.

CLARITY ON THE FED, LESS ON THE ECONOMY

The end of the drawn-out campaign will put to rest short-term questions about regulation and monetary policy, but some investors remained on edge about taxes and economic health.

Although markets came into the night expecting Obama to win, most traders and investors supported Romney, who raised more money on Wall Street than the incumbent.

One bit of clarity from Obama’s win was the future of Fed policy. Romney had pledged to replace Bernanke, whose dovish monetary policy has helped propel gains in both U.S. bond and stock prices in recent years.

“This was kind of a vote for Ben Bernanke and his policies, since Romney was clear he disagreed with that approach,” said Tom Luster, co-director of investment grade fixed income at Eaton Vance. “Clearly there’s some public support for what he (Bernanke) is doing.”

Cumulative returns for maturities on all U.S. Treasuries are at 14 percent since Obama took office, according to Barclays.

The Fed’s easy-money policy has pushed down the value of the dollar, though, and some worry more dollar weakness may be in store, particularly if investors see signs of rising inflation.

“The market rewards this certainty by bidding up gold and selling the dollar against all major currencies,” said Axel Merk, president of Merk Investments in Palo Alto, California.

Under a second Obama presidency, Wall Street will have to forgo trying to repeal Dodd-Frank financial reforms and instead continue to use personal relationships in Washington to keep the law from denting profits, said Karen Shaw Petrou of Federal Financial Analytics, a Washington-based research firm.

Wall Street has bristled at the reforms, which include stricter capital requirements for banks, and the Volcker Rule, intended to stop banks from using government-insured deposits to speculate in financial markets with insured deposits. Bank shares fell sharply Wednesday on fears an Obama re-election meant no respite from the new rules.

But some welcomed the changes.

“I don’t think any reasonable observer would want to go back to the risk that we had in the system before the financial crisis,” said Evercore Chief Executive Ralph Schlosstein. DM

Photo: Indian sand artist Sudarshan Patnaik gives final touches to a sand sculpture of U.S. President Barack Obama on a beach at Puri, in the eastern Indian state of Odisha November 7, 2012. Obama won a second term in the White House on Tuesday, overcoming deep doubts among voters about his handling of the U.S. economy to score a clear victory over Republican challenger Mitt Romney. REUTERS/Stringer