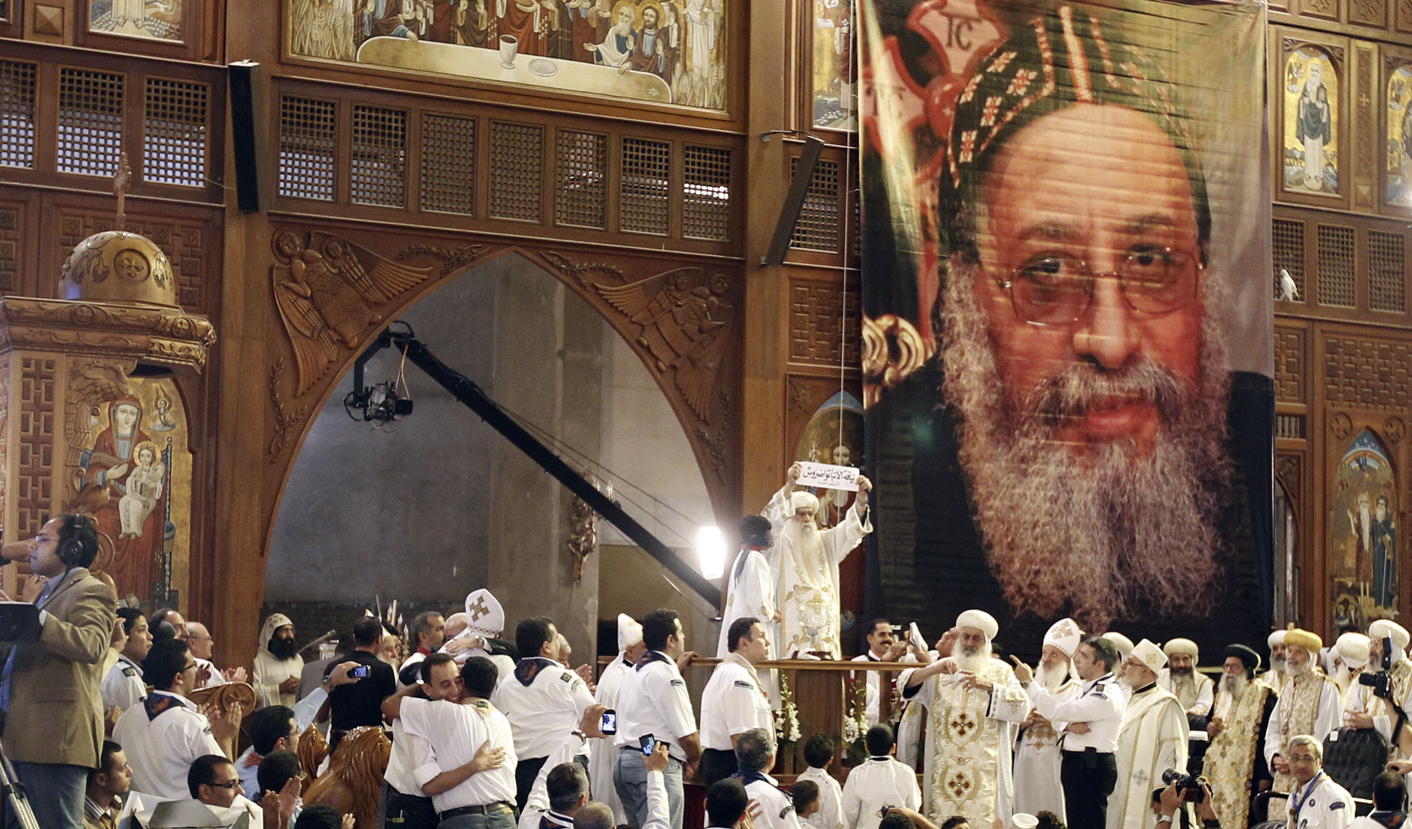 In a ceremony remarkably similar Champions League draw, Egyptian Christians have selected a new pope, who has a lot of work to do if he’s going to calm tensions between Muslims and Christians and reform his archaic church. Can he do it? Is the Pope Catholic? Not this one. By SIMON ALLISON.

In the dark eastern splendour of St Mark’s Cathedral in Cairo, all heavy wood, stained glass and glum icons, thousands of people jostled for a view of an imposing bearded bishop, three plastic balls and a blindfolded boy who held the future of a religion in his nervous right hand. This hand, for the purposes of the ceremony about to unfold, was temporarily doubling as the Hand of God, which when not interfering in football matches is also responsible for electing the leader of the Coptic Orthodox Church.

The BBC described it as “this most unusual of ceremonies”, but really this game of altar lottery was strangely reminiscent of the Champions League draw. The boy reached into a glass bowl containing the three plastic balls, quickly settling on one. He handed it to the bishop, who puzzled over how to open it for longer than strictly necessary. Inside was a name, which was eventually revealed to the expectant congregation: Bishop Tawadros of Beheira, known now and forever more as Pope Tawadros II of Alexandria.

The dramatic selection process became necessary when the new pope’s predecessor died in March this year. Pope Shenouda III had tended to his flock of roughly 10-million Egyptian Copts for more than 40 years, a record of personal leadership that would have made Hosni Mubarak proud. In fact, the old pope and Egypt’s president were firm allies, if not friends; Shenouda endorsed Mubarak’s rigged election campaigns and dissuaded Copts from joining the revolution in 2011. Mubarak, in exchange, left the Coptic Church in relative peace and quiet.

Things have changed since then. Mubarak is in jail, Shenouda is in Coptic heaven and the Muslim Brotherhood is in charge of Egypt. This means that Egypt is a lot more overtly Muslim than it used to be, and no one is quite sure what impact this will have on Muslim-Christian relations. Already, tensions are running high.

But unlike his predecessor, the new pope is not planning to get involved in politics. “The most important thing is for the church to go back and live consistently within the spiritual boundaries because this is its main work, spiritual work,” he said. And in a TV interview before his accession, he emphasised the importance of living together with Muslims and preserving the shared life of the two religions, which have existed side by side in Egypt for centuries. “Integrating in the society is a fundamental scriptural Christian trait. All of us Egyptians have to participate.”

For now, Pope Tawadros’ position has been welcomed as an implicit blessing for Egypt’s Copts to get involved in politics in their own right, rather than letting the church speak for them. “It can’t continue the way it used to be,” Youssef Sidhom, editor of the Coptic newspaper Watani, told The New York Times. “It is not in the interests of the Copts, if they are trying to speak for themselves as full and equal citizens, to have an intermediary speaking for them, and especially if he is a religious authority. I think the church has gotten this message loud and clear.”

The Coptic Church has been in Egypt since 54 AD, ever since a wandering Mark (of gospel-writing fame) ended up in Alexandria. As such, it predates the spread of Islam in the area by centuries. Islam, however, has proven more popular, and Egypt’s Christians today consider themselves, with reason, to be a persecuted minority. The new Pope’s stated desire to focus his attention on reforming the church itself seems unlikely to alter this situation. On the other hand, perhaps keeping a low profile is the best way to avoid attracting further unwanted attention. DM