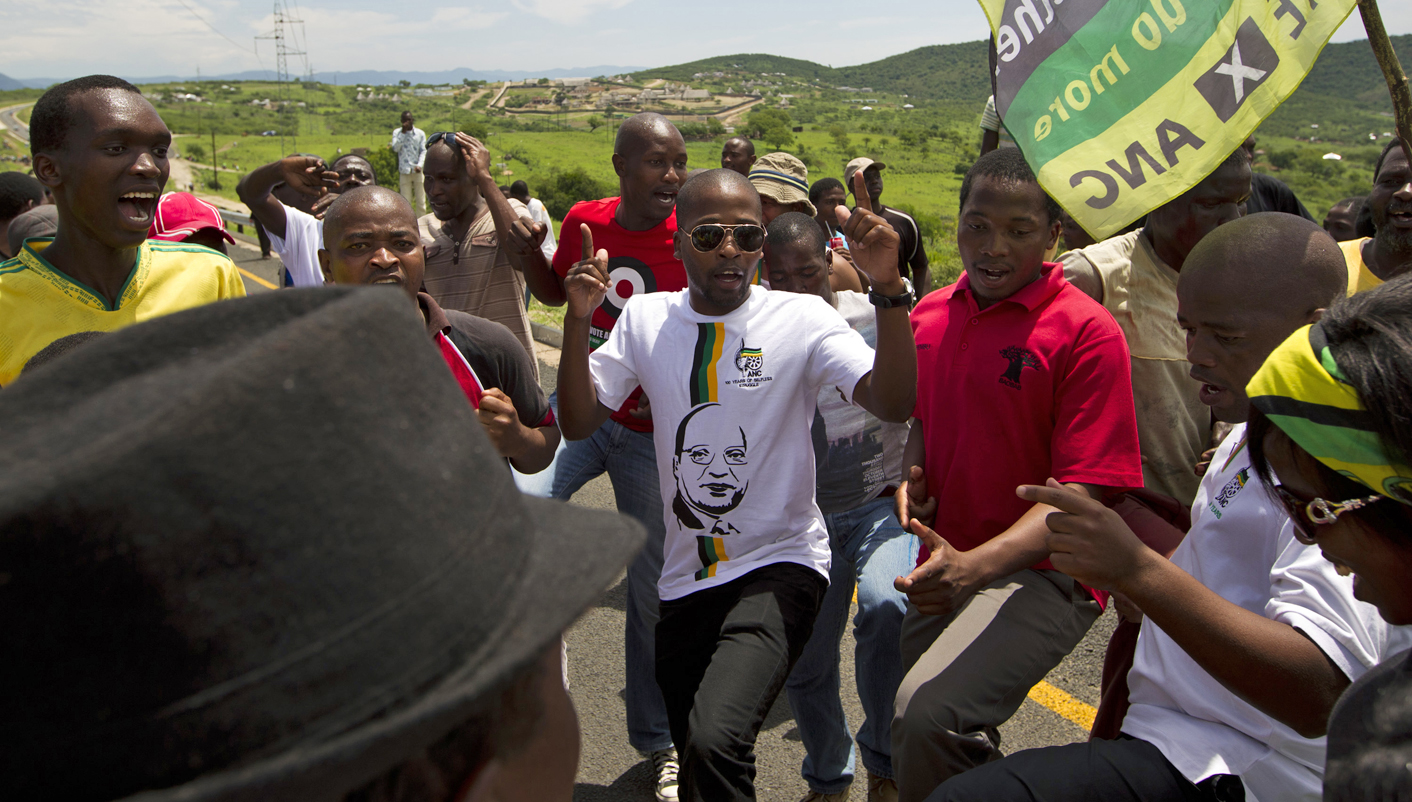 The DA’s visit to the president’s Nkandla homestead to inspect multi-million-rand, taxpayer-funded renovations was never going to succeed. It was not meant to. It was calculated to show intolerance for transparency and readiness to bend the rules to protect Zuma. Police and ANC supporters duly obliged, and South Africa did not benefit from the stunt. By RANJENI MUNUSAMY.

It is only when you have seen President Jacob Zuma at his rural home at Nkandla that you are able to understand why the place is so close to his heart. His large security contingent leaves him be at the homestead and he wonders about freely, drinking in the serenity of the rolling hills and valleys in a wholly relaxed state. It seemed to be the only place where he appeared to be completely comfortable and at peace with the world, always mindful of the tranquillity of rural KwaZulu-Natal.

Well that was some years ago, before the homestead at KwaNxamalala village became a garish monstrosity. Back then, the homestead was quaint and blended in with the surrounding countryside. That, in fact, appeared to be the appeal – why Zuma would want to escape to it when the rigours of his court cases and the political battles in the ANC bore down on him.

But the homestead also bears a painful memory for Zuma. In the late ’90s, it was violated through a dreadful criminal incident, including the assault of a member of Zuma’s family. This prompted plans for an upgrade over a decade ago, including security, which was partially financed by Schabir Shaik, as exposed in his corruption trial. After Zuma became deputy president, police were permanently stationed at the gate as a minimum security arrangement to protect the homestead and its inhabitants.

Paranoia levels escalated after Zuma became president, particularly after he and his inner circle became convinced of a conspiracy to remove him as president. The paranoia was aided by the discredited “Ground Coverage Intelligence Report”, cobbled up by police crime intelligence under Lieutenant General Richard Mdluli, alleging that senior members of the ANC were plotting against Zuma.

It was around this time that the transfiguration of Zuma’s rural homestead began. Of course this also coincided with Zuma’s access to unfettered state financing after being cut off when he was fired as deputy state president in 2005.

Who decided on and authorised the extravagant and exaggerated renovations to the value of R248-million, the bulk of which allegedly at taxpayer’s expense, has yet to be revealed and is now subject to investigation by Public Protector Thuli Madonsela.

But parallel to this investigation, the Democratic Alliance decided to “inspect” the upgraded homestead, with an open invitation to the media to accompany it.

The complaint to the Public Protector was initiated by the DA, as part of a raft of measures to have the state expenditure of the Nkandla upgrade probed. The measures sought by the official opposition, through Lindiwe Mazibuko, its parliamentary leader, included a debate in the National Assembly on the issue; investigations by the Parliamentary Standing Committees on Public Accounts and Appropriations; Public Works Minister Thulas Nxesi to be summoned before the Public Works Portfolio Committee; and Auditor General Terence Nombembe to conduct a forensic audit on the contracts associated with the renovations. Photo: Opposition Democratic Alliance (DA) party leaders walk toward the home of South African President Jacob Zuma after being denied entry by vehicles by police officials in Nkandla November 4, 2012. According to local media, the DA has requested details of the 248 million rand ($28.3 million) upgrades to Zuma’s house, some 240 km (149 miles) north of Durban. REUTERS/Rogan Ward

The inspection visit to Nkandla, led by DA Leader Helen Zille, seemed to have come as an afterthought. Of course, the DA is perfectly entitled to view the subject of so much public attention and controversy, particularly since it is alleged to be funded by the state. Had the DA done so without the fanfare and without attempting to create a media circus, it would probably have turned out to be useful for both the official opposition and the South African public.

In September 2006, the DA pulled a similar stunt by trying to inspect former President Thabo Mbeki’s retirement home in Houghton – also accompanied by the media. This turned out to be a storm in a teacup as the Mbekis stuck to the rulebook, with the state only funding security arrangements they were entitled to.

But the Nkandla upgrade is somewhat different. The renovations are bizarre and over the top, with underground bunkers, soccer fields and enough rooms to house a small army. It is excessive by anybody’s standards and is invoking dismay and disapproval even in ANC circles. A low-key inspection by the DA with a report afterwards on what they had seen would therefore probably not have drawn threats from the ANC and its allies and an unnecessarily heavy police presence.

But as it did with The Spear debacle earlier this year, the ANC had to show its loyalty to its president and defend him from the opposition. As it is difficult to justify or explain the excessive, the only option for Zuma’s defenders is to resort to accusations of racism and to try and project him as a victim.

The South African Communist Party said Zille’s visit was part of a racist right-wing agenda and warned Zille that she would have to take full responsibility for the consequences of the visit to Nkandla.

“The SACP is peeved by the ongoing DA cheap publicity stunts and reckless attempts to score political points,” it said in a statement released Saturday.

This was echoed by metalworkers union Numsa, which said: “There are institutions of the state that have already been caused to investigate the financings around Nkandla.  What the DA wants to do is a clear racist attack and violation of Jacob Zuma’s and his family’s right to dignity and privacy.”

The presidency said in a statement ahead of the march that it is “steadfast in its commitment to maintaining courteous and constructive working relations with all political parties.

“In this instance regrettably the Presidency is left with the impression that the DA’s conduct smacks of a disingenuous publicity gimmick.”

The ANC in KwaZulu-Natal also warned the DA to stay away, stating that the visit would constitute a “serious, direct attack on the president and his family”. ANC supporters were bussed in to Nkandla to face-off against Zille and other DA officials and blocked the main road to Zuma’s homestead to prevent the opposition leaders from advancing.

Sapa reported Sunday that police in riot gear formed a ring of steel around the homestead, and two water canons and several armoured Nyala vehicles were parked nearby. It could have gone horribly wrong – mercifully it did not.

Neither the ANC supporters nor the DA got anywhere near the homestead. DA leaders including Zille live tweeted the drama of being stopped from approaching Zuma’s home by ANC supporters and the police. “We are now on our way to the Nkandla police station to lay a charge under the Gatherings Act against the ANC for blocking a public road,” Zille tweeted.

After all was said an done, the DA’s effort was a wasted exercise which shed no more light on the implications of the upgrade for the taxpayer, and inadvertently forced the ANC and its allies to close ranks. Had the DA persisted in its attempts to have the matter investigated by credible institutions like the Public Protector and Auditor General, as well as pursued efforts to hold Public Works to account, it would have held the moral high ground on “Nkandlagate”.

The DA also seems to have lost sight of the fact that this scandal is playing out at the height of the ANC Mangaung battle, when Zuma is fighting to hold on to his job. The exploitation of state funds for personal benefit is central to this battle and is under discussion in all levels of the ANC as part of the accusations and counter-accusations flying about.

Now the DA has handed Zuma and his defenders a way out, bringing the issue down to race and an attack on the president’s dignity and privacy. As was evident with The Spear painting, this does not necessarily have to make sense or be factually correct – it just has to make Zuma look like the victim to get ANC supporters to rally behind him.

And that’s about the only thing the DA achieved through its non-visit to Fort Zuma. DM

Main photo: Supporters of South Africa’s President Jacob Zuma block the road near his home as opposition party Democratic Alliance (DA) members walk toward them in Nkandla November 4, 2012. According to local media, the DA has requested details of the 248 million rand ($28.3 million) upgrades to Zuma’s house, some 240 km (149 miles) north of Durban. REUTERS/Rogan Ward