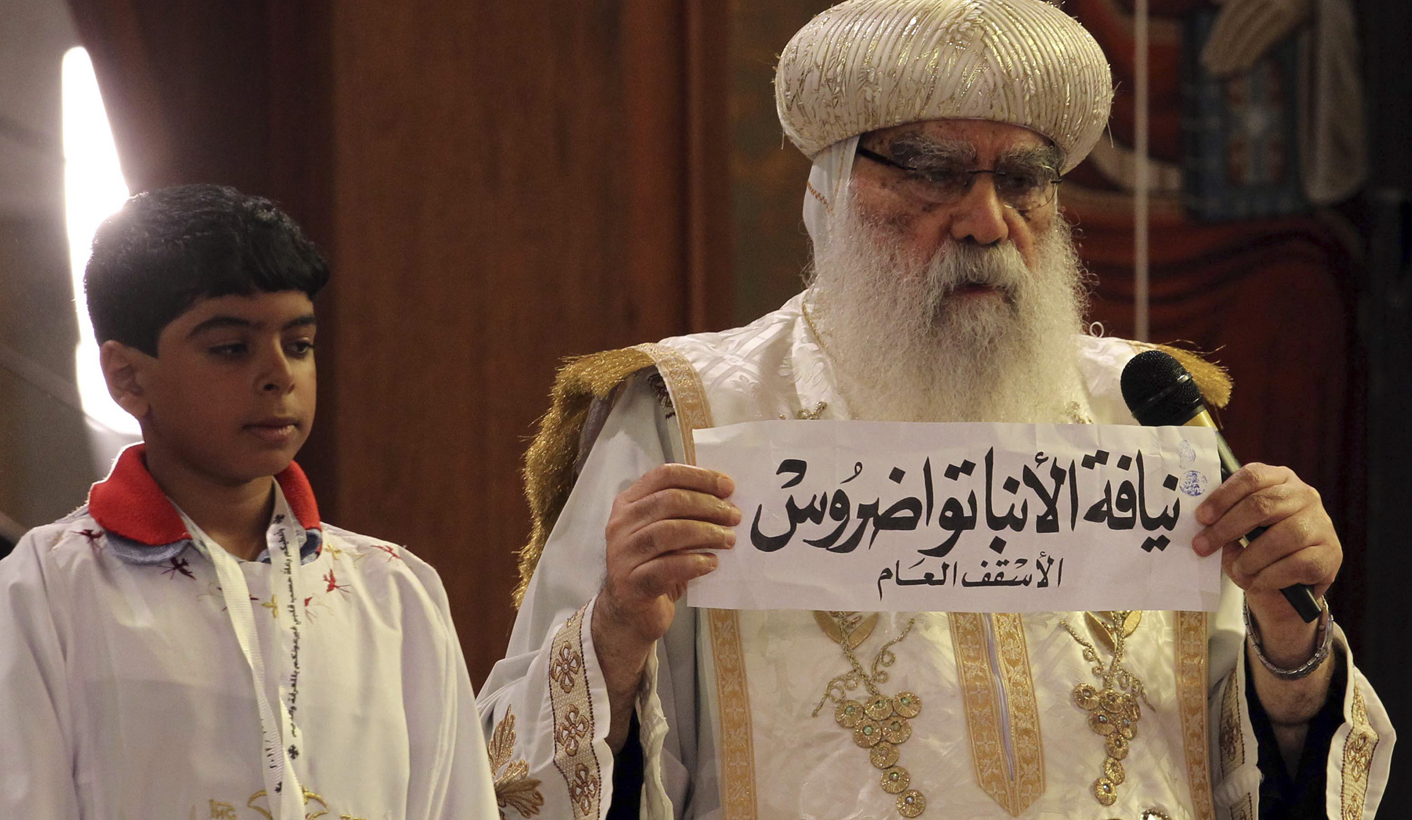 Egypt's Coptic Orthodox church chose a new pope, Tawadros II, in a sumptuous service on Sunday and Christians hope he will lead them through an Islamist-dominated landscape and protect what is the Middle East's biggest Christian community. By Yasmine Saleh.

Christians, who make up about a tenth of Egypt’s 83 million population, worry about political gains made by Islamists since Hosni Mubarak was ousted last year. Radical Islamists have been blamed for attacks on churches several times since, but Copts have long complained of discrimination in Muslim-majority Egypt.

In a ritual steeped in tradition and filled with prayer, chants and incense at Abbasiya cathedral in Cairo, the names of three papal candidates chosen in an earlier vote were placed in a wax-sealed bowl before a blindfolded boy picked out one name.

Copts, who trace their church’s origins to before the birth of Islam in the 7th century, believe this long-established selection process ensured worldly influences did not determine the successor to Pope Shenouda III, who led the church for four decades until his death in March at the age of 88.

“Pope Tawadros II is the 118th (leader of the church), blessed congratulations to you,” said the interim Pope Bakhomious, who was dressed in gold-embroidered robes.

As he held the name aloft, the congregation in the packed cathedral applauded. The formal ceremony to install Bishop Tawadros, 60, as pope will take place on Nov. 18, a priest said.

Pope Shenouda was criticised by some Christians for being too close to Mubarak. Church analysts say he was partly prompted to take a strong advocacy role in Mubarak’s era because many Christians withdrew from public life, complaining of discrimination, leaving the pope their main defender.

“Pope Tawadros faces different rules of the political game,” said Youssef Sidhom, editor of the Coptic newspaper Watani. “Copts are now encouraged, and even encouraged by the church, to get out and participate in the political arena.”

The new pope, bishop of a region in the Nile Delta north of Cairo, was shown on television praying at Pope Shenouda’s tomb in a desert monastery in Wadi el-Natrun surrounded by priests.

Bearded, bespectacled and in black priestly robes, Tawadros thanked God, praised his predecessor and said: “I carry love to all our brothers in Egypt,” in comments broadcast on television.

Church experts said Tawadros, trained as a pharmacist before becoming a priest, had strong communication skills and called for peaceful co-existence in Egyptian society.

Coptic activist Peter el-Naggar welcomed the choice, adding: “He is not the kind of man who would compromise our rights.”

Marina Nabil, 20, said amid the applause after the ceremony that lasted several hours: “I am so happy. I have had dealings with Bishop Tawadros before and he is a very wise and calm man.”

In a ballot last week the candidates had been whittled down to the three. Voters included leading members of the church, public figures and a handful of representatives of the Ethiopian church, which has historic links to the church in Egypt.

The other two candidates for the papal post were Bishop Rafael, a 54-year-old who qualified as a doctor before entering the priesthood, and Father Rafael Afamena, a 70-year-old monk who studied law before taking on holy orders.

Since Mubarak was ousted, Christians have complained of several attacks on churches by radical Islamists, incidents that have sharpened longstanding Christian complaints about being sidelined in the workplace and in law.

As an example, they point to rules that make it harder to obtain official permission to build a church than a mosque.

Sectarian tensions have often flared into violence, particularly in rural areas where rivalries between clans or families sometimes add to friction. Romantic relations between Muslims and Christians are regularly to blame for clashes.

The Muslim Brotherhood, the mainstream Islamist movement from which President Mohamed Mursi emerged to win power via free elections, has sworn to guard the rights of Christians.

Mursi congratulated the pope and the head of his Freedom and Justice Party, Saad al-Katatni, said on his Facebook page he was “optimistic about fruitful cooperation with (the pope) as spiritual leader of Coptic brethren.”

Christianity spread into Egypt in the early years of the faith, several centuries before Islam emerged from the Arabian Peninsula and then swept across North Africa and beyond.

The Coptic Orthodox church is the biggest in Egypt, although there is also a much smaller Coptic Catholic church, as well as other small groups affiliated to churches abroad. DM

Photo: Egyptian caretaker of the Coptic Church, interim Pope Bakhomious (R) holds a piece of paper with the name of Bishop Tawadros written on it, after it was picked by Bishoy Gerges in Cairo November 4, 2012. Egypt’s Coptic Orthodox church chose a new pope, Bishop Tawadros, in a sumptuous service on Sunday that Christians hope will lead them through an Islamist-dominated landscape and protect what is the Middle East’s biggest Christian community.  REUTERS/Mohamed Abd El Ghany (EGYPT – Tags: POLITICS RELIGION)