Plutocrats: The rise of the new global super-rich and the fall of everyone else 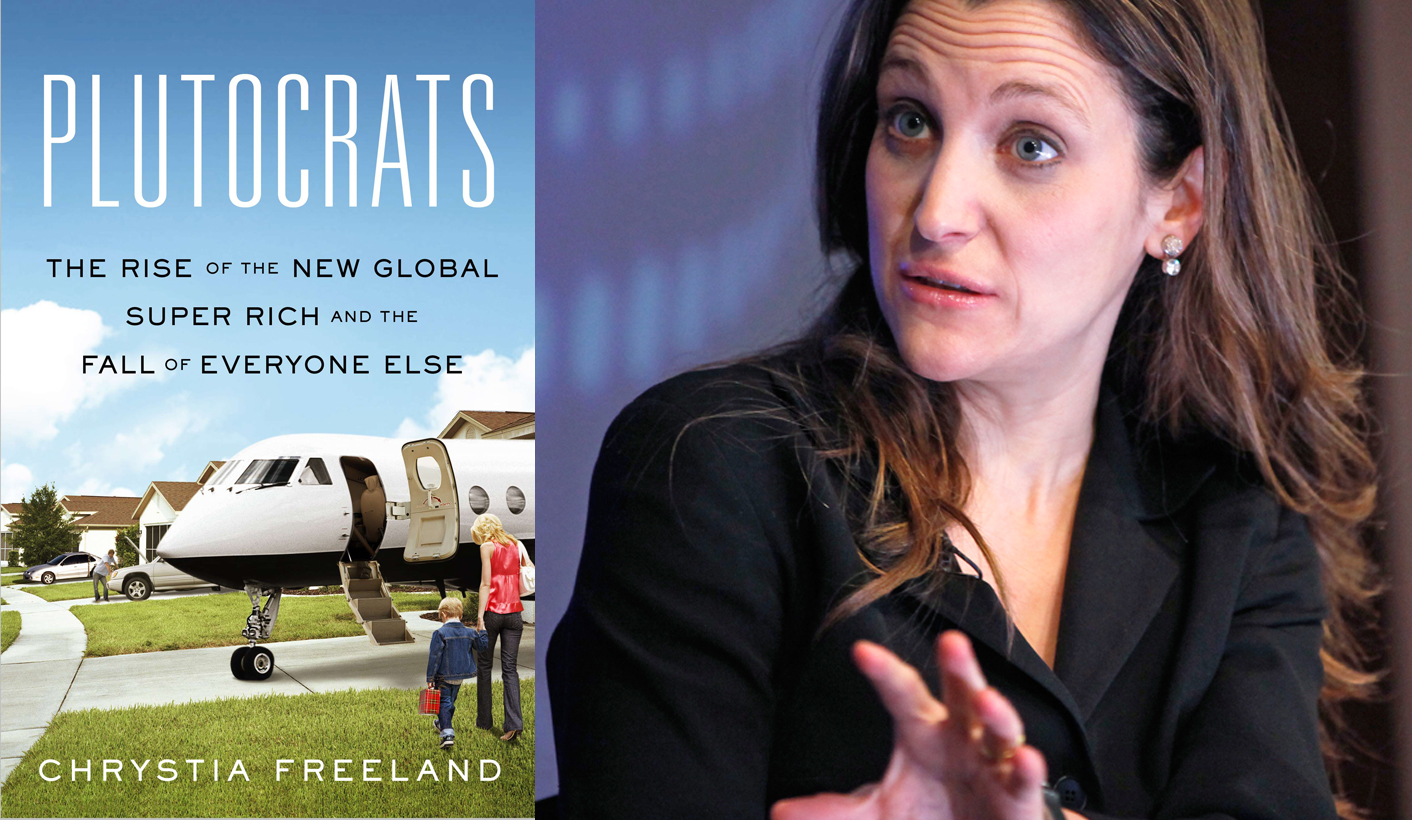 Ah, Venice. Native home of canned romance, of bottled intrigue and the $9 cappuccino. Flashback to the 13th century, however, and Venice is the world’s Silicon Valley, the primary generator of innovation and wealth. According to economists Daron Acemoglu and James Robinson, in their seminal economic study Why Nations Fail, Venice generated capital through the commenda system: an investor pumped money into a trading exploit (salt was the oil of the day), and the spoils were shared between the moneyman and the journeyman. It was the perfect melding of capital, expertise and derring-do, and it allowed for new players to enter the market, creating more and more wealth. That is, until Venice’s elites closed the door on commenda, shut out new investors, and turned their city, once the world’s largest, into a sinking theme park for Japanese newlyweds.

Chrystia Freeland borrows this epic fail, if you will, for the conclusion of her essential book Plutocrats: The Rise of the New Global Super-Rich and the Fall of Everyone Else, and employs it as something of warning, although it probably comes too late. She notes that an inclusive economy, when wrested from the hands of the polity and their representatives, quickly becomes an extractive economy. And an extractive economy always – and this is an historical always – eats itself. The results are ugly. Look around. We’re experiencing them now.

Freeland, a long time financial reporter and the digital editor of Reuters, has spent her career nosing around the Hermes wallets of the hyper-loaded. In Sale of the Century: Russia’s Wild Ride from Communism to Capitalism, she was one of the first to point out that Russia’s newly minted oligarchy weren’t a Russian phenomenon, but a global one. Since the late ’80s, successive political, economic and technological revolutions have completely changed how capital is created. Globalisation has ensured that the change is pandemic; a new elite has risen on a tide of economic disparity that was unimaginable even in the Dark Ages, when the options were either high-rolling clergy, or low-rolling serf.

Rules? There are a few. You just might not like them much. You’ll like them less if you’re not male; an outsider/insider (public school, followed by Harvard); in finance or tech; in the right place at the right time; and smart, but not too smart. That reads as a catchall profile of the 1 percent, which also applies to the 0.1 percent, who are the real power players in the bunch.

Freeland charts the shift of the CEO from company man to itinerant superstar over the course of a generation; she shows us in pornographic detail how the rich have gotten richer and the rest of us have remained the rest of us, just poorer. And she explains how this is a result of a system that is built less on a meritocracy naturally rewarding brilliance than on a lobby-ocracy unnaturally protecting the elite via the political class.

Plutocracy isn’t a strident, whiny smack-down of the status quo, but a clear-eyed account of the social and political implications of a class of super-rich who hold an increasing portion of global wealth. The key word here is “global”.

These people have more in common with each other than they do with their immediate neighbours, or their countrymen. This “cosy global village” flits from Davos to Aspen to TED, firming up networks and driving a brand of philanthro-capitalism based on the precepts of zero-sum wealth accumulation. You run your billion-dollar charity like a hedge fund. But these eleemosynary endeavours are double-barrelled. They are for a Russian oligarch or a horny ex-president what an iPhone 5 is to a preteen – a status symbol. And they are intended to create a moral, which always manifests as a political, consensus with regard to some disease or crisis, either at home (if the plutocrat can identify “home”) or abroad.

In taking the pulse of this class, Freeland points to a phenomenon that mimics communism (and certainly the make-up of the super-rich members of the Chinese Politburo): the rise of the intellectual. The geeks have inherited the earth, using platinum coated diplomas from Harvard, Stanford and the Sorbonne to walk their way into tech or finance. These men, and they are almost always men, end up clogging the passage of wealth that once upon a time made it down to society’s paunch: the middle class.

So much attention has been lavished on that maligned cohort over the past couple of years that the point has been entirely missed: the West didn’t grow because the system was fair, but because the unskilled and lightly skilled earned enough to enjoy a discretionary income, powering the very consumption that made the titans of industry titanic in the first place.

Globalisation has wiped those jobs away and sent them into manifestly unfair systems, where the growing middle class in emerging markets must prepare for the inevitable: a wall of intransigence from their own super-rich. There is no mobility any longer, and Freeland’s contention is that this is a recipe for all-out class war, if not a collapse of the system we’ve grown so happily accustomed to.

Admirably, Freeland keeps the snark and rage at bay, although occasionally the absurdities yank at the leash, and you wish she’d let them run. “Narrated” meals, superstar dentists, Hilary Swank accepting hundreds of thousands of dollars to appear at a Chechen warlord’s birthday party. The behaviour is outré enough that these moments deserve their own book. Freeland’s research is so deep, her access so impressive that she could write it in an afternoon in Monaco.

This is not that book. Studded with numbers and economic data, and despite the odd error (Xiamen is a city in Fujian Province, and not a province itself) it is as complete a work of economic journalism as one could hope for. More surgeon than writer, Freeland has dissected the dynamics of power in this globalized, Gilded Age and plopped the viscera before us. It’s not a pretty sight. This is the book that 100% of the 99% should read if they want to better know the forces battering them into eternal penury. DM