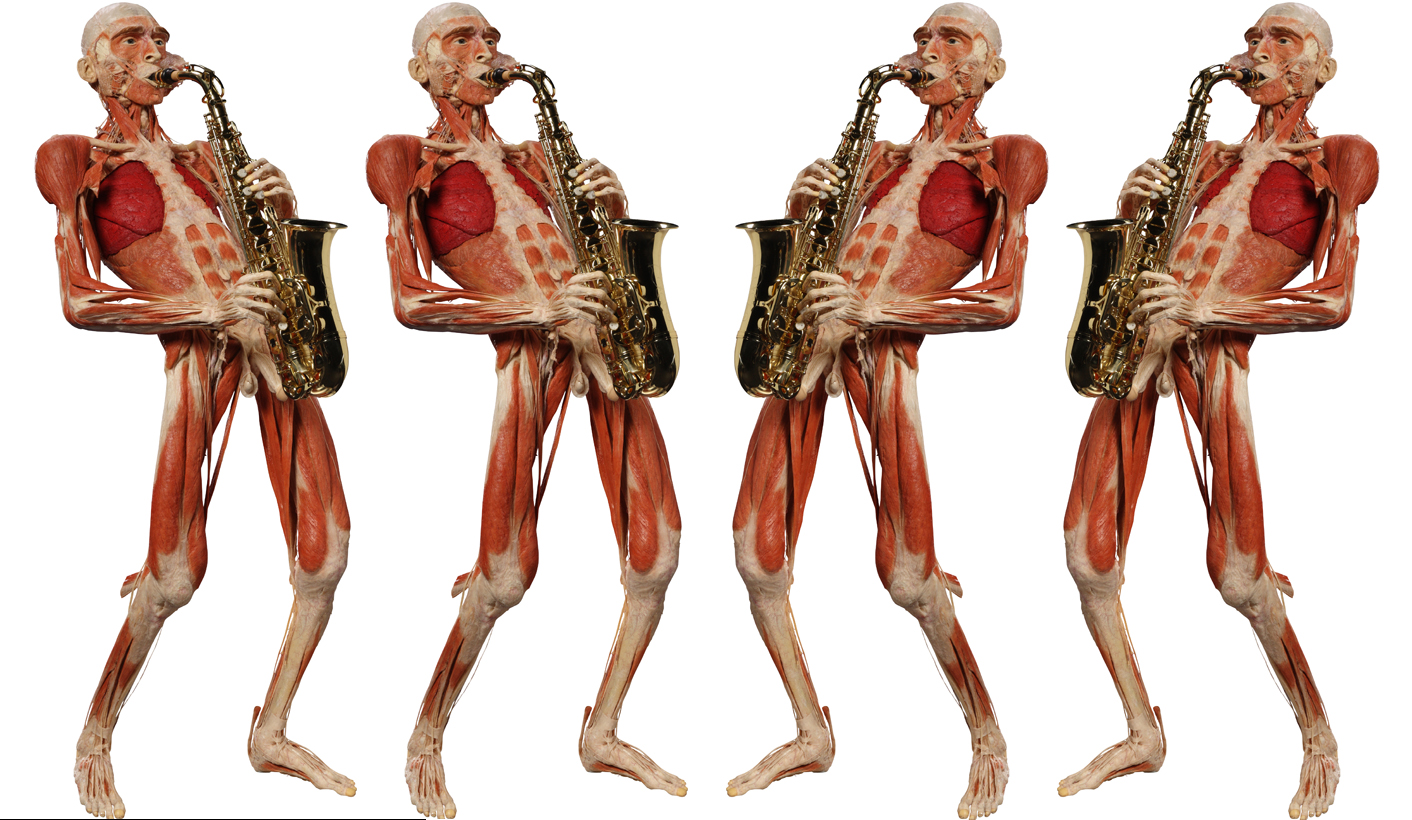 Would you pay to see preserved human corpses strung up in postures of activity? You may well never have considered the question before. But now you should, because the famous Body Worlds exhibition – touted as the world’s most popular touring attraction – has arrived on our shores. By REBECCA DAVIS.

A spokesperson for the Muslim Judicial Council, Nabeweya Malick, took a similar line, telling the newspaper that human bodies should not be displayed in this way. “I think a normal person will be very offended,” she said.

These reactions will not trouble Body Worlds one whit – in fact, they are the exhibition’s bread and butter, if it’s not too grim to talk about food in the same breath as cadavers. At the exhibition’s opening party, the snacks were kept in a separate room from the bodies, for obvious reasons. Or maybe not so obvious. In an essay defending the exhibition, German anatomist Wilhelm Kriz wrote that the man whose  brainchild the show is, Dr Gunther von Hagens, “literally sank his teeth into this subject matter right from the start”. Let’s hope that’s a loose use of “literally”.

The personality – and image – of Von Hagens looms large over Body Worlds. The maverick anatomist – two words which do cause some unease when paired together normally – came up with a new way of preserving anatomical specimens while working as a research assistant in Heidelberg in 1978. It works by replacing the fluids in the bodies, which account for 70% of human matter, with reactive plastics like silicone rubber, epoxy resin or polyester resin. This is called “plastination”.

Plastination makes previously soft and squishy body parts, like muscles, rigid. This means skin can be peeled off bodies to reveal their insides. Don’t worry: “Plastination stops decomposition and dehydration so completely that the insides of bodies cease to be objects of revulsion,” von Hagens explained in an essay on the subject. Even better, “Observers are not bothered by any kind of offensive odours.”

Von Hagens lives and breathes plastination. “I think about plastination nearly all the time: before I get up in the morning, when I am looking at my schedule for the day, when I am in the shower, driving my car, or doing my shopping,” he writes. “That is how a pudding mould becomes a cranium, a meat slicer becomes a cutter for making anatomical slices of the brain, a pancake turner becomes a turner for brain slices”. What an experience brunch at Von Hagens’ place must be.

Von Hagens’ first commercial exhibition of “plastinates” (corpses preserved in this manner) took place in Tokyo in 1995. As you can imagine, it caused a bit of a stir, as it has ever since. The arguments against the Body Worlds exhibition have centred largely on the issue of the dignity of the dead and the ethics of displaying human remains for commercial profit. Then there was a teensy bit of a kerfuffle in 2004, when the German magazine Der Spiegel claimed Von Hagens was using the corpses of executed Chinese prisoners for display. Body Worlds denied this, but von Hagens returned the corpses to China.

Body Worlds stresses these days that all corpses on display were donated to the exhibition voluntarily via a “body donor” programme similar to that required to be an organ donor, which allows you to join a registry before your death. Organisers have more than 13,000 people on their books, and as such they have had to close the list for the time being. “It wouldn’t be fair to take on new people when we have had people on the list for years,” Dr Angelina Whalley, Von Hagens’ wife, told the Daily Maverick.

They have helpfully carried out a study of why people would want to donate their bodies to Body Worlds after their death. Serving a “good purpose” was the response of 22% of those registered; 19% “are fascinated by plastination”; 13% “are uncomfortable at the thought of being cremated or buried”; 13% “do not wish to burden their relatives with tending to a grave”; 12% “are fascinated by the public exhibitions”; 7% “want to save burial costs”; and 4% “do not have any relatives”.

Body Worlds argues that what it does is the opposite of disrespecting the dead. “Plastination transforms the body, an object of individual mourning, into an object of reverence, learning, enlightenment and appreciation”, is a quote attributed to Von Hagens. Organisers argue that it is of extreme educational interest for people to see what the insides of their bodies look like, in order to make the necessary lifestyle changes to preserve health into old age.

Von Hagens wasn’t in town for the opening of the Cape Town exhibition, the first on the African continent, but Whalley was. She is variously described as the exhibition’s “curator” and “creative director”. In other words, it is she who decides how the bodies should be posed.

“In deciding what type of specimens go on display, we learn from our visitors,” she told Daily Maverick. “For our first exhibition, in Japan, the bodies were just lying flat, straight, like in an anatomy class. People were interested, but one complaint was that the bodies looked so dead.” So they decided to take a leaf out of the books of the old Renaissance artists, who would produce visually-appealing anatomical poses set in dreamy landscapes.

“We realised that if we want to appeal to people, they need to serve an additional purpose: they need to look beautiful,” Whalley said. “Most people have never seen a corpse before.”

Does Whalley think the corpses they exhibit are beautiful?

“Yes,” she answers without hesitation. “I feel they are beautiful, and this is confirmed by the majority of our visitors. Some of them tell us they regard what we do as art. Aesthetics and drama are really necessary for the appeal.”

The plastinates really are striking-looking. Contrary to what you might think, they aren’t creepy, though you’d probably have to be paid a lot to spend a night alone in the exhibition hall. The exhibition that Body Worlds has brought to South Africa – there are several different incarnations – is themed the Cycle of Life, which means it exhibits embryos along with the adult plastinates. The identities, ages and causes of death of the body donors are not given because “the exhibition focuses on the nature of our physical being, not on providing personal information on private tragedies”. That doesn’t stop you speculating, however.

The exhibition features plastinates posed in various forms of activity: jumping a fence, playing a saxophone, steering a ship. One memorable exhibit, “Molting Woman”, features a female who has been posed stepping out of her skin. There is also a sex scene, which is signposted heavily. “This area includes a sex scene,” reads the sign. “It is your choice whether you want to come in to experience these aspects of life. All the donors have given their permission to be included in this section of the exhibition.” (This begs the intriguing question: do you get to specify what activity your corpse is used for? “Nah, I don’t fancy throwing the javelin for posterity – I’d rather have a bit of sex, thanks.”)

For those thinking this sounds rather child-unfriendly, allow me to reassure you that the sex scene is extremely (almost disappointingly) tame, with most of the anatomically naughty bits hidden from sight. The exhibition has been called “pornographic” before, but more in the way that it objectifies bodies in general than because of any particularly sexual content. One does wonder, though, why the female plastinate participating in the act has to be wearing high-heeled boots, and have her nails painted.

In addition to the plastinates, also on display are preserved organs, bones, and even arteries. A very good reason to take teenagers to the exhibition would be to show them the fairly horrifying display of a smoker’s lungs as compared to a non-smoker’s. There is an even more extreme version – the complete set of organs of a heavy smoker. “These are the ones I’ve been wanting to avoid seeing,” groaned a woman in front of me. And truly, they are grim – the lungs like two burned baked potatoes.

“It is important to see diseased organs,” insisted Whalley. “Your body is with you all your life, but laypeople never have the chance to see inside it. How can you care for your body if you don’t know what you are caring for?” She claims that they often receive visitors to the exhibition who are unwell in some way, and have come to see exactly what their disease looks like inside them. Whalley also said the exhibition is responsible for a lot of miraculously reformed smokers and drinkers. “People must understand that the body is the result of our lifestyles.”

Does she have any sympathy for those who see the exhibition as morbid or creepy? “They are mainly people who have never seen it,” she said. You can believe this is true: the exhibition is actually rather life-affirming to visit, in that it also instils a sense of wonder at the capacity of the human body. The fact that the organisers chose to open the exhibition on Hallowe’en, however, suggests that they may be trying to leverage off some sense of ghoulishness. Not so, says Whalley. “In Germany Hallowe’en does not play a role for us.”

There’s one obvious further question – is Whalley donating her body to plastination after her death? “Of course!” she says, almost scandalised by the implied suggestion that she might not. “I have been a body donor for many years.” DM