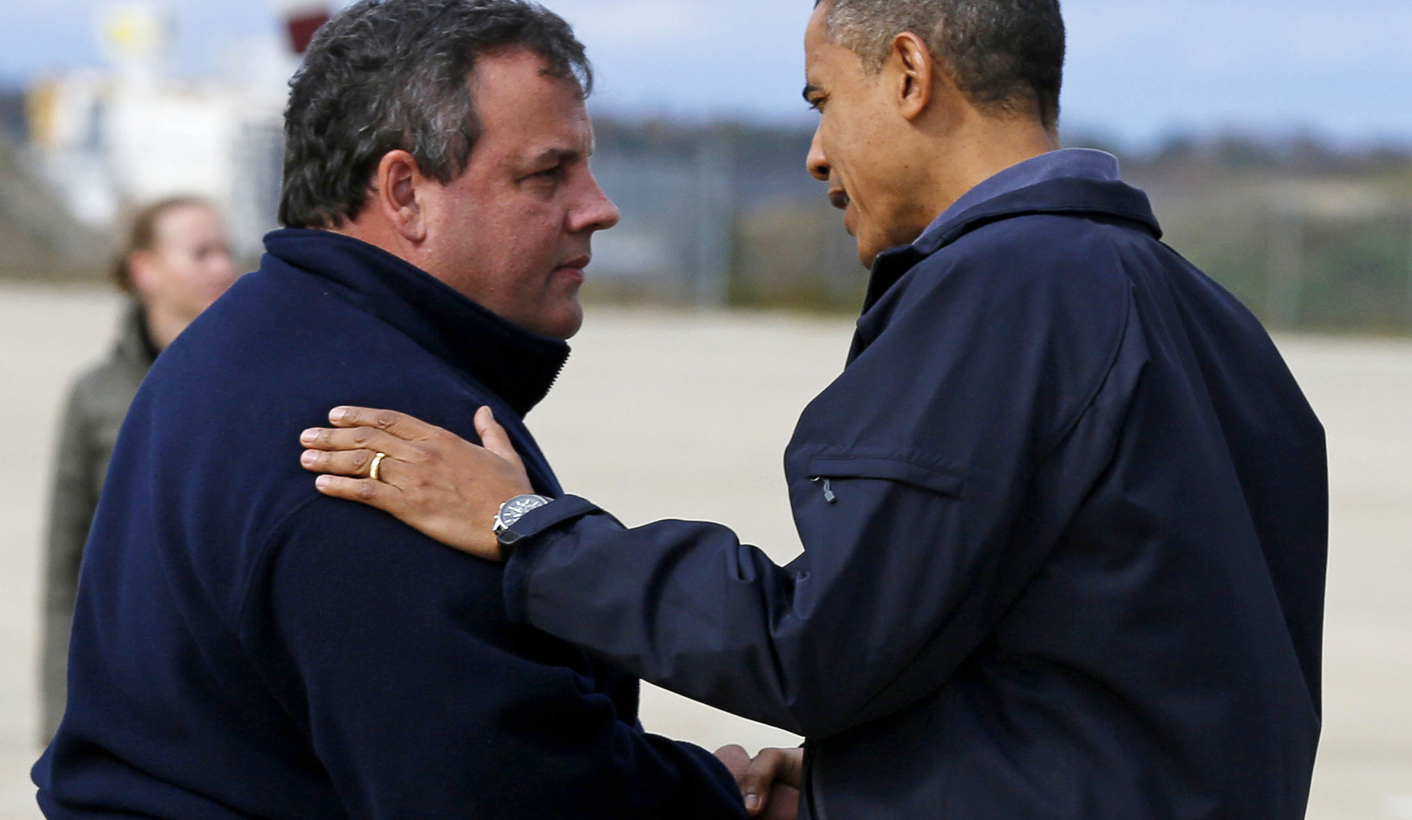 Well, here we are, finally, less than a week before the actual, honest-to-Pete American presidential election. We’re almost there. Admit it: you thought we’d never get to this point, didn’t you. And beyond the presidential election, there are also those 435 congressional contests, a third of the senate, a spread of governors and mayors, plus thousands of state legislators, city and county council members - and even a few judges and a municipal dog catcher or too up for election or re-election across the country. And in less than a week, all of it will be over. By J BROOKS SPECTOR.

Regardless of all that 2012 electoral Sturm und Drang, and despite the billions of dollars spent in all these contests and all the big issues left undiscussed by the candidates, today’s topic is the 2016 presidential race. Now, you there in the front, stop that eye-rolling right now. This is important. More important even than the issues, it will help explain some of the political moves happening in the wake of that gigantic tropical storm with its Biblical-style floods, the snow (!) and the vast arc of destruction that is the East Coast of the United States.

Attentive readers may recall that back at the Republican Party’s presidential nominating convention only two months ago, New Jersey Governor Chris Christie gave a rousing, partisan, get-the-troops-riled-up-and-ready-to-do-battle kind of speech that was nominally on behalf of Mitt Romney, but which also seemed to have had a particularly large number of words devoted to praising Chris Christie. Well, the keynote speech has sometimes been the launching pad for a candidacy four years later. Now, hold onto that thought for a minute.

Christie actually did flirt rather publicly with the idea of tossing his own hat into the ring to seek the presidential nomination some months earlier, when early contestants like Texas Governor Rick Perry quickly crashed and burned and Mitt Romney, as a candidate, had seemed to many Republican activists to be the political equivalent of kissing one’s sister.

Christie’s name was even floated as a possible vice presidential nominee, but he was passed over in favour of Congressman Paul Ryan. Perhaps he was too big a presence (in the corporeal sense – the man does have a solidity, a stoutness about him) or perhaps because he seemed just slightly too acid-tongued. Perhaps he and Mitt just didn’t have the right chemistry together, like Tony Soprano uneasily paired with George Babbitt as a choir boy. Whatever.

Christie instead got the consolation prize, one of the big speeches at the convention. Following that meeting in Tampa, Christie had been very large and very visible on the campaign circuit for his party’s ticket.

Then comes the storm – Super-Storm Sandy, that is. As it became clear that this was no ordinary hurricane, and as emergency preparations became an all-consuming task that involved governments in more than a dozen states and multiple agencies of the federal government. President Obama dropped out of campaign mode and returned to Washington to demonstrate some vigorous hands-on guidance of crisis management. Mitt Romney did essentially the same thing, except that he was forced to improvise an alternative version of crisis management – since the only thing he was in charge of was his presidential campaign machinery.

To make his position perfectly clear, Obama put on his grim, determined, serious, game face, dealing crisply with his federal government’s planning and responses and visibly coordinating with state and local governments all across the Northeast. He was doing the real thing – but he was also drawing a clear contrast to George W Bush’s lackadaisical, desultory, doltish response after Hurricane Katrina. Obama’s involvement got him headlines, news clips and admiration – while Romney was forced to turn his previously planned campaign rallies into emergency food drives for victims of the storm. Talk about that often-predicted October surprise that would irrevocably upset assumptions about the campaign; this October surprise in the form of a meteorological catastrophe was one for the record books.

On Wednesday, Obama was off to survey the damage in New Jersey – possibly the hardest hit state, with much of its scenic beachfront landscape still under water and many homes turned into twisted wreckage. But the thing of it is, he was doing it in the company of Governor Christie. In the immediate aftermath of the storm, Christie has been tweeting his appreciation of the president’s responses to the storm: telling bureaucrats that absolutely no red tape should impede any form of rapid federal government response and that everyone should get right on to the job of helping out affected citizens.

And there was Christie everywhere on the news as well, praising Obama. He was effusive about Obama’s leadership, calling it “wonderful”, “excellent” and “outstanding.” On MSNBC, usually seen as the liberal equivalent to strongly Republican Fox, Christie said, “It’s been very good working with the president. He and his administration have been coordinating with us. It’s been wonderful.”

These appearances, as Maureen Dowd, the famously acerbic columnist for The New York Times put it, mean that “The dramatic homestretch ad for President Obama, running on every network and in all media markets, is a home run, devastating for Mitt Romney. And, best of all, the president didn’t have to pay for it, or even say, ‘I approve this message.’ It was a total gift — and from a Republican and top Romney surrogate. Gov. Chris Christie, the fleece-wearing, order-barking Neptune of the Jersey Shore, was all over TV Tuesday, effusively praising the president for his luminous leadership on Hurricane Sandy….”

Then on the Today Show on NBC, Christie went further, calling the president “outstanding” and the response from the Federal Emergency Management Agency (the government agency that had caught all that flack under Bush for its public ineptitude) had been “excellent”. Christie’s Twitter message from an official computer then said he wanted to “thank the president personally for all his assistance as we recover from the storm.”

And all this from one of the Republicans’ favourite sharp, partisan, slash-and-burn politicians? When he popped up on Fox News (the conservatives’ favourite TV space) and was asked if his party’s candidate should also tour the damaged areas of New Jersey, Christie retorted, “I have no idea, nor am I the least bit concerned or interested. I have a job to do in New Jersey that is much bigger than presidential politics. If you think right now I give a damn about presidential politics, then you don’t know me.”

Just a few days earlier, before the storm had hit, Christie had said of Obama, “He’s like a man wandering around a dark room, hands up against the wall, clutching for the light switch of leadership, and he just can’t find it.” Absent Sandy, that kind of thing would have been Christie’s message right through the last millisecond of this campaign – but the storm has now changed the dynamic good and proper.

But let’s remember, too, that Christie is a Republican governor in a strongly Democratic-leaning state. So, let’s make a couple of assumptions. Let’s assume Mitt Romney loses the election – it’s close but he still loses. The Republican Party then falls on itself, infighting over who caused the debacle: Did the strong conservatives do him in, keeping him too much on the right until he shifted to the centre in the closing weeks of the campaign (in the final 22 October presidential debate, if one wants to put a precise date stamp on it)? Or was it the moderate wing of the party that caused his loss by making the Tea Party and company finally give up their enthusiasm for the presidential election because of Romney’s obvious pivot to the middle – confirming fears he really was a principle-less, core-values-less, shape shifter.

Regardless, if Obama gets that second term, the Democrats have to start looking soon for the right person to step up as a logical successor – even though it is hard to sustain a party’s hold on the White House for three successive elections. For the Republicans, however, once the internecine warfare dies down, sage party veterans might well want to turn their lonely hearts towards a man who had governed a big urban state effectively, who has been in the public eye and taking and giving fire for years, who has learned the hard way how to work with the other party – and who has demonstrated real winning appeal to some Democrats and many independents in successive elections.

If Christie starts to lose a little bit of weight, if pictures start to appear with him in a track suit or doing some kind of physical work to be more a man of the people, if he donates some of his now-too-big-to-wear suits to the ill-clad homeless, you will know he has caught the presidential bug. And 2016 will be just four short years away. DM