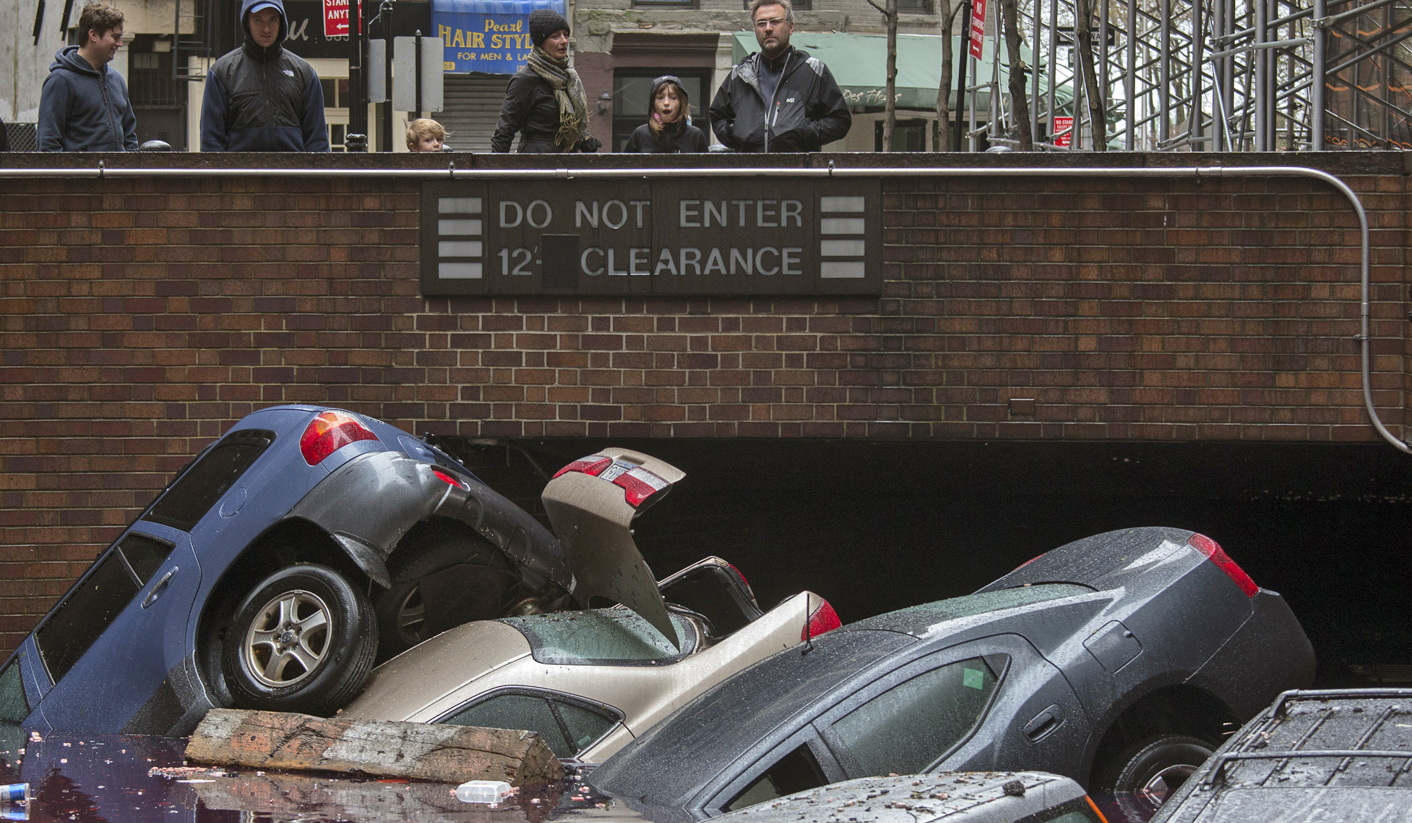 Millions of people were left reeling in the aftermath of monster storm Sandy on Tuesday as New York City and a wide swathe of the eastern United States struggled with epic flooding and massive power outages. The death toll climbed to at least 30. By Anna Louie Sussman and Michael Erman.

As the weakened but still sprawling storm system continued its trek inland, more than 1 million people in a dozen states along its path were still under orders to evacuate. Sandy left behind a trail of damage – homes underwater, trees toppled and power lines downed – up and down the Atlantic coast.

The storm interrupted the presidential campaign a week before Election Day, giving President Barack Obama an opportunity to look presidential as he oversees the government response. He drew praise from New Jersey Governor Chris Christie, who has been a strong supporter of Obama’s opponent.

“I want everyone leaning forward on this,” an aide quoted Obama as telling his disaster-response team in the White House Situation Room. “I don’t want to hear that we didn’t do something because bureaucracy got in the way.”

Houses and businesses on the New Jersey shore sustained extensive damage from the storm’s onslaught. “The devastation is unthinkable,” Christie told reporters after seeing aerial pictures of the area.

In the storm’s wake, Obama issued federal emergency decrees for New York and New Jersey, declaring that “major disasters” existed in both states. One disaster-forecasting company predicted economic losses could ultimately reach $20 billion, only half insured.

“Make no mistake about it. This was a devastating storm, maybe the worst we have ever experienced,” New York City Mayor Michael Bloomberg said.

All along the East Coast, residents and business owners awoke to scenes of destruction.

“There are boats in the street five blocks from the ocean,” said evacuee Peter Sandomeno, one of the owners of the Broadway Court Motel in Point Pleasant Beach, New Jersey. “That’s the worst storm I’ve ever seen, and I’ve been there for 11 years.”

Sandy, which was especially imposing because of its wide-ranging winds, brought a record storm surge of almost 14 feet (4.2 meters) to downtown Manhattan, well above the previous record of 10 feet (3 meters) during Hurricane Donna in 1960, the National Weather Service said.

Water poured into the subway tunnels that course under the city, the country’s financial capital, and Bloomberg said the subway system would likely be closed for four or five days.

“Hitting at high tide, the strongest surge and the strongest winds all hit at the worst possible time,” said Jeffrey Tongue, a meteorologist for the weather service in Brookhaven, New York.

Hurricane-force winds as high as 90 miles per hour (145 km per hour) were recorded, he said. “Hopefully it’s a once-in-a-lifetime storm,” Tongue said.

As residents and business owners began a massive clean-up effort and faced a long and costly recovery, large parts of the region remained without power, and transportation in the New York metropolitan area was at a standstill.

The U.S. Department of Energy said more than 8 million homes and businesses in several states were without electricity due to the storm, which crashed ashore late on Monday near the gambling resort of Atlantic City, New Jersey.

The unprecedented flooding hampered efforts to fight a massive fire that destroyed more than 50 homes in Breezy Point, a private beach community on the Rockaway barrier island in the New York City borough of Queens.

New York University’s Tisch hospital was forced to evacuate more than 200 patients, among them babies on respirators in the neonatal intensive care unit, when the backup generator failed. Four of the newborns had to be carried down nine flights of stairs while nurses manually squeezed bags to deliver air to the babies’ lungs, CNN reported.

The death toll continued to rise, with reports of at least 30 people killed by the storm.

“Sadly the storm claimed lives throughout the region, including at least 10 in our city … and we expect that number to go up,” Bloomberg said.

Federal government offices in Washington, which was spared the full force of the storm, were closed for a second day on Tuesday, and schools were shut up and down the East Coast.

The storm weakened as it plowed slowly west across southern Pennsylvania, its remnants situated between Pittsburgh and Philadelphia, with maximum winds down to 45 mph (72 kph), the National Hurricane Center said.

At its peak, the storm’s wind field stretched from North Carolina north to the Canadian border and from West Virginia to a point in the Atlantic Ocean halfway to Bermuda, easily one of the largest ever seen, the hurricane center said.

Obama and Republican presidential rival Mitt Romney put campaigning on hold for a second day instead of launching their final push for votes ahead of the Nov. 6 election.

Obama, who has made every effort to show himself staying on top of the storm situation, faces political danger if the federal government fails to respond well in the storm’s aftermath, as was the case with predecessor George W. Bush’s botched handling of Hurricane Katrina in 2005.

But Obama also has a chance to look presidential in a national crisis.

With politics cast aside for the moment, Republican Christie heaped praise on the Democratic incumbent for the government’s initial storm response.

“The federal government response has been great,” Christie, a staunch Romney supporter, told NBC’s “Today” show. “I was on the phone at midnight again last night with the president personally … and the president has been outstanding in this.”

Three towns in New Jersey, just west of New York City, were inundated with up to 5 feet (1.5 metres) of water after the nearby Hackensack River flooded, officials said. Rescuers were using boats to aid the marooned residents of Moonachie, Little Ferry and Carlstadt.

In New York, a crane partially collapsed and dangled precariously from a 90-story luxury apartment building under construction in Midtown Manhattan.

Much of the city was deserted, as its subways, buses, commuter trains, bridges and airports were closed. Power outages darkened most of downtown Manhattan as well as Westchester County, affecting more than 650,000 customers, power company Consolidated Edison said.

Neighborhoods along the East and Hudson rivers in Manhattan were underwater, as were low-lying streets in Battery Park near Ground Zero, where the World Trade Center once stood.

U.S. stock markets were closed on Tuesday but would likely reopen on Wednesday. They closed on Monday for the first time since the attacks of Sept. 11, 2001.

Most areas in downtown Manhattan were without power on Monday morning. As the sun rose, most of the water in Manhattan’s low-lying Battery Park City appeared to have receded.

A security guard at 7 World Trade Center, Gregory Baldwin, was catching some rest in his car after laboring overnight against floodwater that engulfed a nearby office building.

“The water went inside up to here,” he said, pointing to his chest. “The water came shooting down from Battery Park with the gusting wind.”

One of the Con Ed workers pulled from the floodwater, Angelo Amato, said he was part of a crew who had offered to work through the storm.

“This is what happens when you volunteer,” he said. DM

Photo: Residents stand over vehicles which were submerged in a parking structure in the financial district of Lower Manhattan, New York October 30, 2012. Major U.S. stock exchanges expect to open on Wednesday after a monster storm shut down their trading for two days. The southern tip of Manhattan where Wall Street and the NYSE are located lost power on Monday after being buffetted by Sandy, the worst storm to hit New York since at least 1938. REUTERS/Adrees Latif