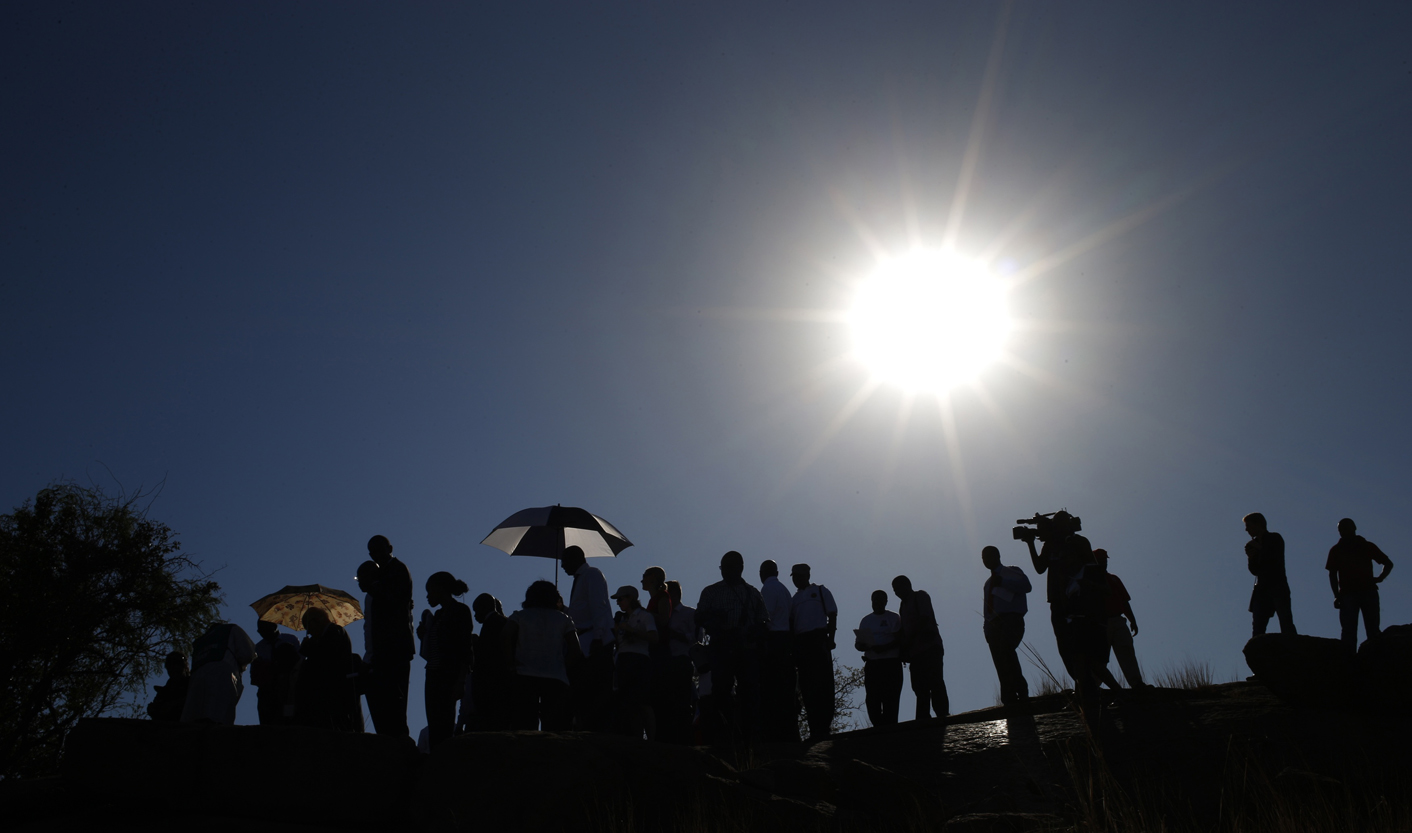 The sudden announcement over the weekend by the department of justice that it would no longer fund the families of the slain miners to attend the Commission of Inquiry caused a big uproar. On Monday, the government’s lawyer and the justice minister issued about-face statements, and will ask President Jacob Zuma to change the rules of the commission to make the funding issue their problem squarely. The issue isn’t one of protocol or procedure so much as one of the core purpose of the commission. The people most entitled to hear the truth about what really happened are surely the families of the deceased. By SIPHO HLONGWANE.

The Marikana Commission of Inquiry has been a place of not a few sudden announcements followed by some upheaval. When Dali Mpofu, an advocate representing the wounded and arrested miners of Lonmin, read out an email from Lonmin shareholder and ANC heavyweight Cyril Ramaphosa sent just tens of hours before the 16 August massacre, he did so to illustrate what he called a “toxic relationship” between the mining company and the state. Perhaps it was a calculated move – it generated a lot of tut-tutting at the former union leader at a time when the news was that many branches were possibly going to nominate him to be the vice-president of the ruling party. The unfortunate incident of the gruesome television footage shown in front of family members of the deceased caused the commission to adjourn for a while so that counsellors could be brought in.

The justice and constitutional development department dropped its own rock into the pool on Saturday, causing a far bigger splash than it intended. It suddenly announced that it would not be providing transport for the family of the 34 miners killed on 16 August.

“There is no legal basis on which the attendance of the family members or representatives can be sustained on state expense,” said Mthunzi Mhaga, spokesperson for the department of justice.

“The attendance of the first session of the Commission was mainly based on humanitarian basis as it is important that they understand the primary purpose of the inquiry.”

The rebuke was swift and very loud. Several of the unfortunate were quoted in the media expressing anger and disappointment. Several non-government organisations wrote press statements to refute some of the claims made by the department in a mini public relations blitz over the weekend.

The Socio-Economic Rights Institute (which acts at the commission on behalf of 25 miners who were killed) said that the department had not actually consulted with the families before making the decision.

“The decision was taken without prior notice or consultation. Our clients are distraught,” SERI said in a statement. “They want to know the truth about what happened to their loved ones on 16 August. They want the opportunity to see the evidence unfold. They particularly want to see and hear for themselves what the police have to say about their conduct on 16 August. Our clients also want to hear the eyewitness accounts of those who were with their loved ones when they died.”

On Monday, the evidence leader for the police (and thus by proxy, the state) Mbuyiseli Madlanga said that the department would continue to support those families who wanted to attend the proceedings.

He said that a statutory amendment was being sought by the department to make the responsibility for the families’ transport theirs.

Mhaga returned with another statement on Monday: “The department has liaised with the Commission this morning to convey its intention to submit the proposed amendment to the president before the end of business today. Mr Jeff Radebe regrets any confusion and misconception that may have been created by the decision taken by the department this past Saturday.”

Whilst the commission continues, the fate of the relatives is still not entirely settled. Many who had been coming were not present on Monday.

SERI executive director Jackie Dugard said that they were relieved by the new announcements. “We hope that now the commission and government will engage compassionately with the families and find out what each family wants from the Commission process and what precisely would feel like justice being served for each,” she said.

SERI believes that the obligation goes further than that, thanks to the doctrine of legitimate expectation. It basically creates a binding contract between a public authority and the people if that authority makes a promise or if a regular practice exists which the claimant can reasonably expect to continue.

It was SERI’s advocate Dumisa Ntsebeza who made a point of saying that the families should be allowed to attend since the commission pertains to them in particular. The Commission chairman Ian Farlam agreed, and one family member from each deceased person was provided for.

What made the department’s earlier decision even more objectionable was the fact that the commission was not being broadcast live on a continuous basis. It means those that are not able to attend cannot see the full story unfold. While it is unclear exactly why this has not been done, where it has for other Commissions before, we understand that there is a need to protect people from self-incrimination, or accusing themselves of a crime for which they could be prosecuted. Unfortunately the partial blackout means that the public may not get to see justice being done.

The question of television coverage and the presence of the families may even be subject to political calculations. The ruling party of today is far removed from the one that organised and administered the Truth and Reconciliation Commission. Not only did that one travel around the country (it needed to, given the breadth of its terms of reference) but it was televised live, and notably, the ANC was a willing participant in that process. The need at the time was to get past the party’s own Apartheid-era atrocities as quickly as possible even if it meant losing some of the immense moral capital it had. It can’t do the same thing today – and expect the same results – because it does not occupy the same pedestal. The same calculation that led to a very open TRC may be behind the government’s reluctance today to have many eyes and ears observe the Farlam Commission. DM

Photo: Members of the judicial commission of inquiry into the shootings at Lonmin’s Marikana mine and members of the media visit the site October 1, 2012. A retired judge toured the spot where police killed 34 striking platinum miners in August as he opened a judicial inquiry on Monday into South Africa’s bloodiest security incident since the end of apartheid. Ian Farlam has four months to uncover the events surrounding the August 16 “Marikana massacre”, which sparked intense criticism not only of the police but also of mining bosses, unions, the ruling African National Congress (ANC) and President Jacob Zuma. REUTERS/Mike Hutchings