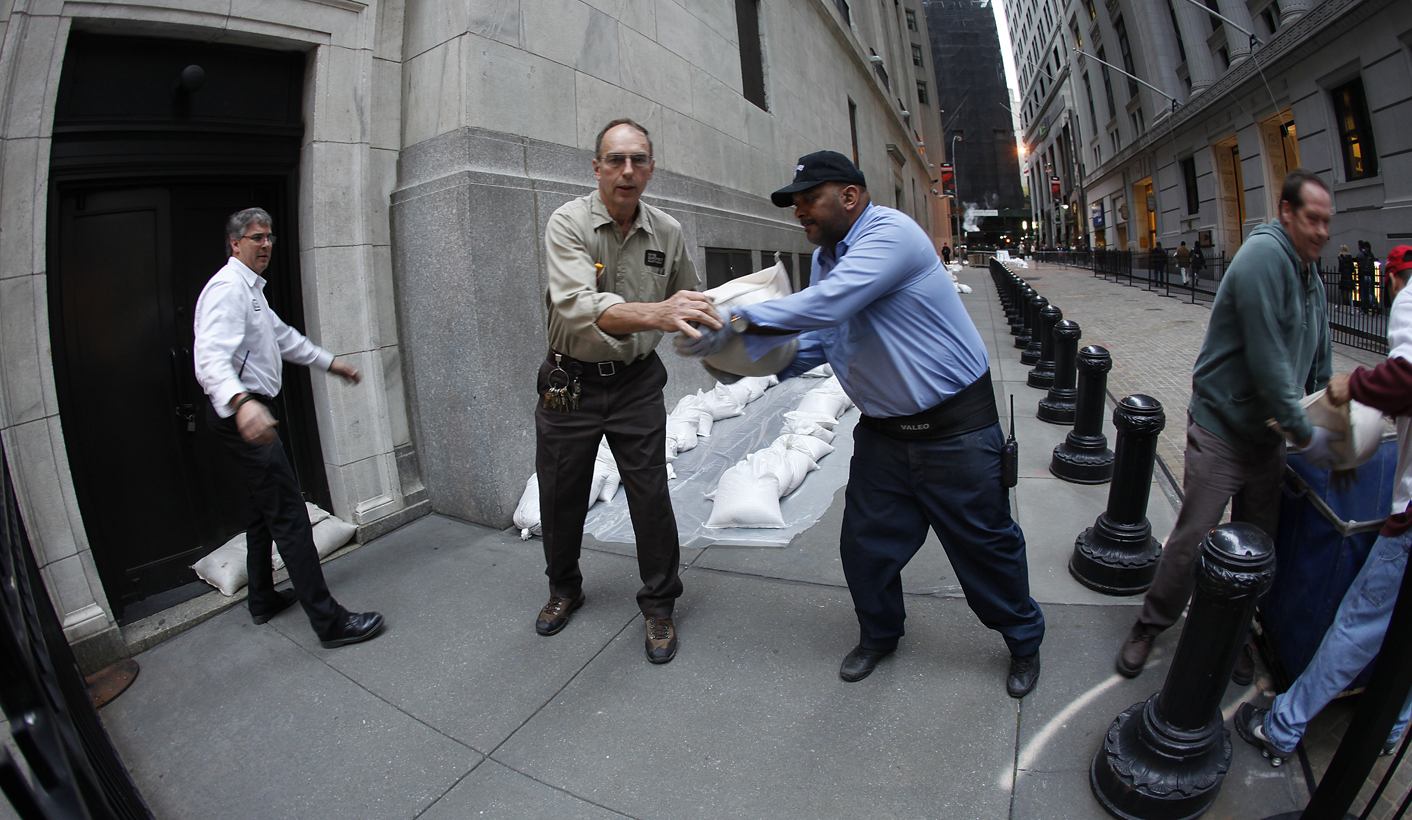 Tens of millions of East Coast residents scrambled on Sunday to prepare for Hurricane Sandy, which could make landfall as the largest storm to hit the United States, bringing battering winds, flooding and even heavy snow. By Michael Erman and Caroline Humer.

The massive storm, which has already killed 66 people in the Caribbean, was headed toward a densely populated region that includes Washington, New York and Boston and its effects could be felt for hundreds of miles, officials warned.

It could be the largest storm to hit the United States, according to the National Oceanic and Atmospheric Administration.

New York and other big cities closed their transit systems and schools and ordered residents of low-lying areas to evacuate before a storm surge that could reach as 11 feet (3.4 meters).

They warned that power outages could last for days.

“We’re expecting the worst, hoping for the best. We’re getting everything off the basement floor. We’ve got two sump pumps but during Hurricane Floyd, we were down there for 17 hours straight sweeping water into the sump pumps,” said Maria Ogorek, a Maplewood, New Jersey, lawyer and mother of three.

The U.S. government said it had granted administrative leave to non-emergency federal workers in the Washington D.C area.

The New York Stock Exchange said it would close its trading floor on Monday for the first time since Hurricane Gloria in 1985. All stocks listed on the exchange will trade electronically, NYSE Euronext said.

President Barack Obama asked residents to heed the orders of state and local authorities to protect themselves from Sandy.

“This is a serious and big storm,” Obama said after a briefing at the federal government’s storm response center in Washington. “We don’t yet know where it’s going to hit, where we’re going to see the biggest impacts.”

New York Mayor Michael Bloomberg ordered the evacuation of low-lying areas of New York City, from upscale parts of lower Manhattan to waterfront housing projects in the outer boroughs, that are home to some 375,000 people.

“If you refuse to evacuate you’re not only putting yourself at risk but also the first responders who will have put themselves at risk in an emergency,” Bloomberg told a news conference.

“A lot of them are on their way out but some of them are thinking about (Hurricane) Irene and how they didn’t get damage and I tell them it’s two different animals,” Rivera said, referring to the August 2011 hurricane that brought severe flooding to parts of New Jersey and Vermont.

Officials warned that flooding could be particularly severe since the storm’s arrival coincides with a full moon, which normally means higher-than-usual high tides.

“The most worrisome aspect of Sandy is the high tides,” said Rhode Island Governor Lincoln Chafee. “With the full moon occurring Monday, with Sandy coming up the Bay, we’re very concerned about flooding in our low-lying coastal areas.”

New York City, New Jersey and Philadelphia transit authorities said they would begin shutting down service on Sunday afternoon. Maryland’s transit system, serving some suburbs of Washington, said it would not open on Monday.

Amtrak, the passenger rail service, canceled nearly all service on the Eastern seaboard on Monday and would halt its service north of New York along the Northeast corridor.

Transit systems in Washington and Boston said they planned to operate as usual on Monday as long as it was safe to do so.

Airlines flying into and out of New York’s three major airports were all expected to cease flight activity on Sunday night, according to the Port Authority of New York and New Jersey.

Forecasters said Sandy was a rare, hybrid “super storm” created by an Arctic jet stream wrapping itself around a tropical storm, possibly causing up to 12 inches (30 cm) of rain in some areas, as well as up to 3 feet (90 cm) of snowfall in the Appalachian Mountains from West Virginia to Kentucky.

Nasdaq planned to open on Monday despite the transit shutdown and evacuation orders, with big banks putting up key personnel in hotels overnight so that they would be able to make it in to work on Monday morning.

The Chicago Mercantile Exchange said it would suspend floor trading on the NYMEX oil market on Monday, as it is located in the New York City evacuation zone near the Hudson River. It said electronic trading would go on as usual.

Worried residents in the hurricane’s path packed stores, searching for generators, flashlights, batteries, food and other supplies in anticipation of power outages. Broadway’s theaters planned to close on Sunday night and remain closed on Monday.

New York City, Boston and Washington were among the jurisdictions that announced schools would be shut on Monday.

Sandy blew the presidential race off course, forcing Obama and Republican challenger Mitt Romney to cancel scheduled campaign stops. It fueled fears that the storm could disrupt early voting before the Nov. 6 election.

As of 2:00 p.m. EDT/1800 GMT on Sunday, there were fewer than 5,000 customers without power in Delaware, the District of Columbia, Florida, Maryland, North Carolina, South Carolina, and Virginia, the U.S. Department of Energy said in a statement.

While Sandy’s 75 mph (120 kph) winds were not overwhelming for a hurricane, its exceptional size means the winds will last as long as two days, bringing down trees, roofs and buildings and piling up rainfall and storm surge.

Hurricane-force winds extended 175 miles (280 km) from the center of the asymmetrical storm, while its lesser tropical storm-force winds spanned 520 miles (835 km) in diameter.

Sandy was centered about 530 miles (850 km) south of New York City, at late afternoon on Sunday, the National Hurricane Center said. It pushed seawater up over the barrier islands off North Carolina known as the Outer Banks.

Sandy was moving northeast over the Atlantic, parallel to the U.S. coast, at 15 mph (24 kph).

Sandy killed at least 66 people as it made its way through the Caribbean islands, including 51 in Haiti, mostly from flash flooding and mudslides, according to authorities.

Even with all the warnings, some people tried to carry on with their plans.

“I just don’t buy into the hype,” said Kate Sullivan, a 40-year old computer specialist from Alexandria, Virginia, who was headed to Baltimore Washington International airport for a planned flight to Los Angeles. “I’m pretty sure I’m going to end up in LA by the end of the night.” DM

England power their way to T20 series win against Proteas

Was the tussle for Africa’s Free Trade secretary-general an omen?

Municipalities can buy their own alternative power