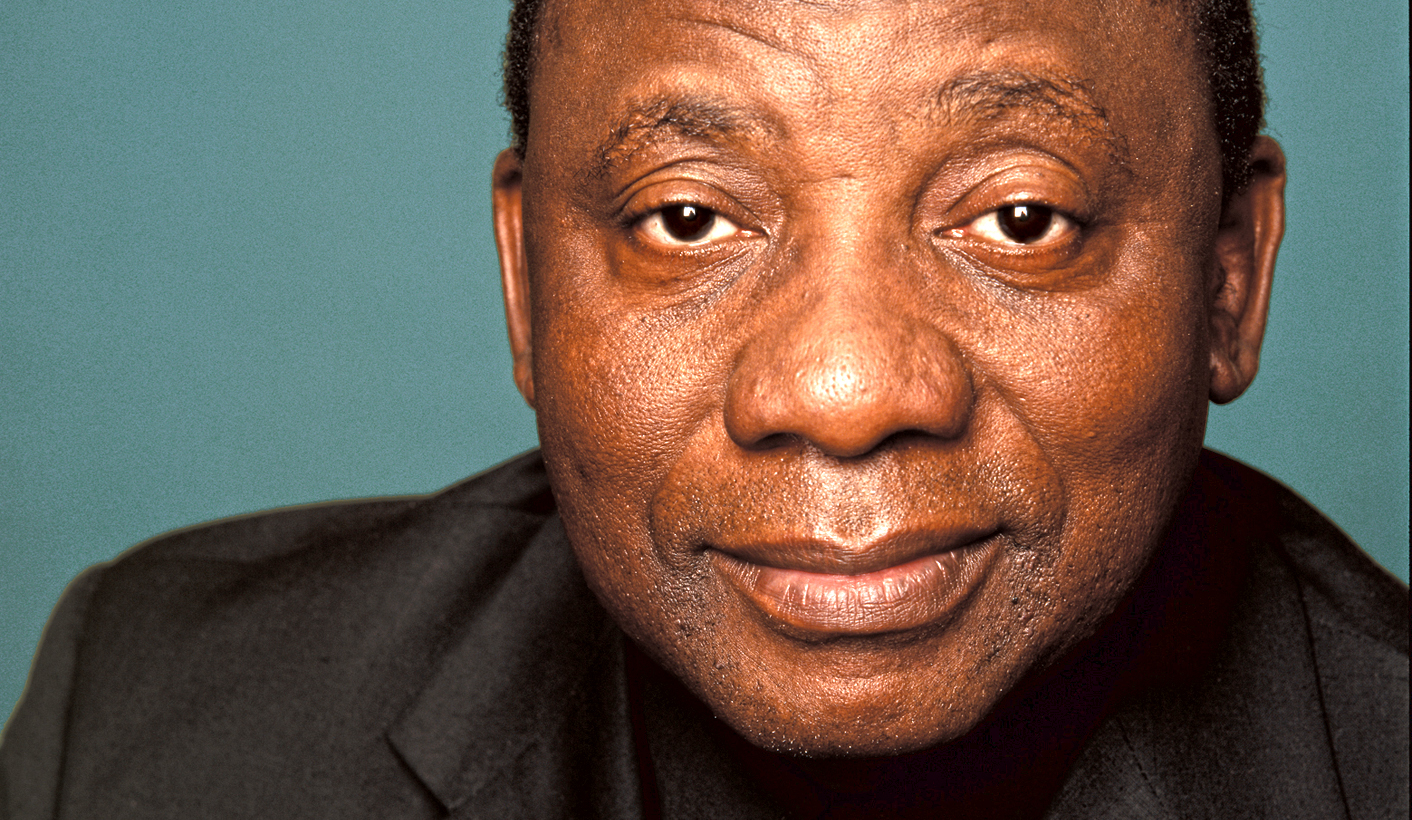 The country is divided as to whether business tycoon Cyril Ramaphosa committed the ultimate betrayal of the workers on whose shoulders he rose to prominence, or whether his involvement in drawing state and police intervention at the Lonmin mine was warranted. But whatever the outcome, Ramaphosa’s role in the Marikana massacre has transported him from a messiah waiting to be elevated to high political office to the league of fallen heroes. By RANJENI MUNUSAMY.

What exactly was ANC national executive committee (NEC) member and business tycoon Cyril Ramaphosa accepting blame and apologising for when he said he took responsibility for the Marikana massacre? In an interview with SABC radio, Ramaphosa said the killing of 34 mineworkers by police at Marikana following a protracted wildcat strike at the Lonmin mine should not have happened.

“I think a lot of us as stakeholders are to blame. Marikana should not have happened, we are all to blame and there are many stakeholders that should take the blame. But taking the blame should mean that we should make sure it never, ever, happens again,” Ramaphosa said in September.

At the time, public discourse was raging around the multiple failures of all the players involved, resulting in the massacre of striking workers, which shook the country and reverberated around the world. Ramaphosa came across as someone who had reflected on the tragedy and decided that instead of pointing fingers at anyone else, he was willing to accept responsibility on behalf of the company, on whose board he sits.

He did this long before the commission of inquiry investigating the Marikana massacre began its hearings. Ramaphosa also apologised for taking part in an auction in which he bid for a buffalo cow and calf worth around R18 million.

Two days after the massacre, Ramaphosa’s company, Shanduka, announced that they would donate R2 million towards the funeral costs of the murdered mineworkers. Some of the workers reacted angrily to the offer as blood money, but it was presented as a goodwill gesture in a time of extreme trauma and devastation in that community.

Now Ramaphosa is caught in the eye of the storm around a series of emails which reveal his role in drawing intervention from the highest levels of government and the ANC to clamp down on the striking workers at the Lonmin platinum mine at Marikana.

Advocate Dali Mpofu, representing the 200 mineworkers who were arrested by police, revealed the email correspondence at the Farlam commission of inquiry into the Marikana massacre.

In one of the emails to Lonmin’s chief commercial officer, Albert Jamieson, Ramaphosa wrote: “The terrible events that have unfolded cannot be described as a labour dispute. They are plainly dastardly criminal and must be characterised as such. There needs to be concomitant action to address this situation.”

This email was sent exactly 24 hours before police fired live ammunition at the workers, killing 34 and injuring 78 others.

According to The Times, the emails show that Ramaphosa warned Police Minister Nathi Mthethwa to come down hard on striking miners; how mining bosses lobbied him to “influence” mineral resources minister Susan Shabangu; and how he advised Shabangu that her “silence and inaction” about the happenings at Lonmin were “bad for her and government”.

In an email titled “Security Situation”, Ramaphosa says: “You are absolutely correct in insisting that the minister [Shabangu] and indeed all government officials need to understand that we are essentially dealing with a criminal act. I have said as much to the minister of safety and security.”

The correspondence also reveals his communication with National Union of Mineworkers (NUM) president Senzeni Zokwana and Mike Teke, deputy chairman of the Chamber of Mines, about the strike. It further refers to a proposed conversation with ANC secretary-general Gwede Mantashe to suggest that the ANC intervene.

The correspondence was prompted by the deaths of 10 people, including two policemen, in violence associated with the strike. As a result of Mpofu’s revelations at the commission of inquiry and the ensuing public furore, Lonmin attempted to contain the damage.

“Considering the violence and loss of life in the period 10-14 August, Lonmin engaged with a number of stakeholders to ensure that the situation in and around Marikana was addressed in the appropriate manner. Lonmin is a mining company and is not responsible for law enforcement.

“It therefore stands to reason that the company, including members of its board, would communicate with the relevant stakeholders in government to ensure that they properly understood the company’s view of the situation on the ground to ensure a peaceful resolution of the matter. Lonmin’s action to engage with appropriate authorities of the state was simply part of a process aimed at achieving normality,” the company said in a statement.

Fair enough. That explanation may absolve Lonmin to an extent, as it wanted high-level intervention to stop the violence, and it used a board member with a hotline to members of the Cabinet and the NUM to secure it.

Why, then, is there an uproar over Ramaphosa’s intervention?

It is because Ramaphosa has forgotten his roots and invited deadly state force to spill the blood of his own people for his and the company’s financial benefit.

Betrayal does not get more poignant than that.

Ramaphosa is no ordinary businessman who hit the big time in post-Apartheid South Africa. He is a former general secretary of the NUM and a former ANC secretary general, who, if Nelson Mandela had his way, would have already served out two terms as South Africa’s president instead of Thabo Mbeki.

Twenty-five years ago, it was Ramaphosa who led the biggest wage strike in South Africa’s history when thousands of workers in the gold- and coalmines downed tools for three weeks. The strike, involving over 300,000 mineworkers, brought South Africa’s mining sector to its knees.

Ramaphosa is also one of the architects of South Africa’s Constitution and earned respect across the political spectrum for his diplomacy and sophistication. His early departure from active politics left society feeling that it had been robbed of one of the ANC’s brightest minds. He has remained a member of the ANC NEC, but has steered clear of the factional battles raging in the party.

At the height of the Zuma-Mbeki battle, there were attempts to draw him back from the business sector into ANC leadership. He is viewed as a voice of reason with the pedigree to lead the party, but he has so far resisted efforts to get him to stand as a presidential candidate in the ANC.

However, over the past few months, as divisions deepened between supporters of President Jacob Zuma and Deputy President Kgalema Motlanthe, Ramaphosa’s name has been touted as a candidate for ANC deputy president on the Zuma slate. But the emails cast him in a new light as a person with callous disregard for poor workers, who happen to be a core constituency of the ANC.

Did Ramaphosa think his role, documented in the emails, would not be exposed, or did he assume that his Pontius Pilate act through a general apology and a hefty donation beforehand would cleanse him of culpability?

A source close to Lonmin claims that the company itself made the emails available to the commission of inquiry as it did not want to hide anything. If that is true, with all the resources available to Ramaphosa, he surely should have had a strategy to land the damning evidence publicly and explain his actions. The source said the company was planning to explain the emails at the appropriate time during the commission, but Mpofu jumped the gun by airing them in the opening statements as a “score-settling exercise”.

Mpofu represented former ANC Youth League (ANCYL) president Julius Malema and his colleagues in their disciplinary case, in which Ramaphosa chaired the disciplinary appeals panel. Ramaphosa effectively sealed Malema’s fate when he confirmed his expulsion as well as that of the former ANCYL spokesman Floyd Shivambu.

The ANCYL and Shivambu took the opportunity of the exposure of the emails to turn the screws on Ramaphosa.

“Comrade Cyril Ramaphosa has lost any credibility as a genuine leader of the people and a revolutionary committed to the cause of the working class. With his email to police minister Comrade Nathi Mthethwa, Comrade Ramaphosa delivered the more than 40 people to their death at Marikana. Comrade Cyril’s preoccupation with the preservation of his monetary interests in Lonmin led him to call for ‘concomitant action’ to deal with the ‘criminal acts’”, the ANC Youth League said in a statement.

“We concur with the assertions made by the legal representative of the workers: Marikana was a premeditated murder of our people and Comrade Cyril has the blood of Marikana workers on his hands. Comrade Cyril Ramaphosa must apologise to the families of the injured and the dead for agitating and inciting the South African police against them,” the league said.

Shivambu went further, calling for Ramaphosa’s arrest for “his involvement in inciting violence and agitating for the killing of mineworkers”.

The Farlam Commission will pronounce on the parties responsible for the massacre, based on all the evidence that will be put before it, and will decide whether Ramaphosa or Lonmin should be held accountable.

But there are some questions we might never get answers to. In all his interactions with various players during the strike, why did Ramaphosa, as a former representative of mineworkers, not attempt to reach out to the workers to hear their side? Does he not feel any connection to them any longer, and if so, is that why he thought they deserve to be treated with brute force?

When Ramaphosa was making his apology on national radio, why did he not mention the emails and his role in securing state intervention in the strike? Did he think South Africa would never find out the truth, or was he too ashamed to admit his actual role? Seeing that he was not forthcoming with the truth, was his apology genuine?

But the most critical question remains: What happened to Cyril? Did excessive wealth steal the soul of one of South Africa’s greatest political heroes; the one who rose from the very working class that is now being torn apart? The one who was a silent hope, the man so many people wished were the president?

A star has fallen. Forever. DM