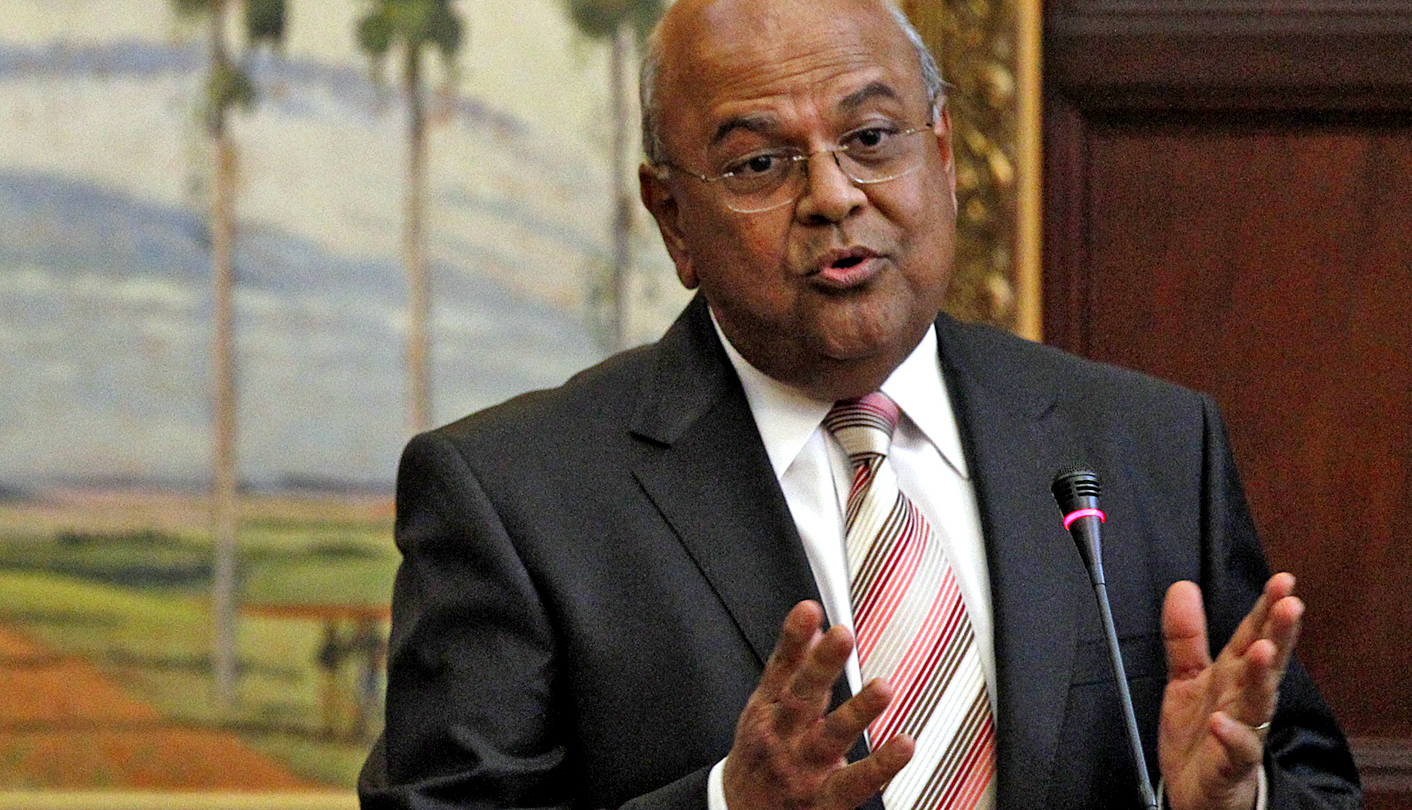 Finance Minister Pravin Gordhan had a frank talk with South Africa over the rising deficit, and warned that the state’s spending binge needed to be curbed.  He eased worries over fiscal austerity and told the pessimists to zip it. But how much support, political protection and clout does Gordhan have to keep the economy on track? By RANJENI MUNUSAMY.

In a government whose communications strategy is a game of duck and dive, it was refreshing that Finance Minister Pravin Gordhan aired all the dirty laundry within the first five minutes of his Medium Term Budget Policy Statement in Parliament on Thursday. Instead of treating the mining crisis, Marikana massacre, non-delivery of supplies to schools and hospitals, and the ratings downgrades like elephants in the room, these were the first matters of business.

“We have witnessed a crisis of labour relations in the mining sector, with tragic consequences in Marikana. We have seen mismanagement of supplies to schools and hospitals in some provinces. Moody’s and Standard and Poor’s have seen fit to downgrade their ratings of our ability to service debt. Inappropriately, in our view.

“These events are a cause for urgent reflection. There are lessons to be learnt, mistakes to be acknowledged, and corrective steps to be taken by all constituencies. Above all, it is time for action. Collective action,” Gordhan said.

The economic and political climate was by no stretch of the imagination optimal for Gordhan to present the mid-term budget. The poor global economic conditions, the slowing down of South Africa economic growth, the widening current account deficit, reduced revenue collection, ratings downgrades and disruptions to production in the mining sector to the value of R10.1 billion all point to an unhappy fiscal package.

Gordhan did his best to settle investor and domestic fears that the wheels were coming off in South Africa. “Nothing is there in the numbers to indicate that South Africa is going to fall off any fiscal cliff of any kind. Nothing is there to suggest, as credit rating agencies are suggesting, that we are being subjected to such pressures that we have to radically change the fiscal trajectory that we have been following for a long time,” Gordhan said at a briefing ahead of his speech in the National Assembly.

From the media interviews he did after the speech, it is clear that Gordhan has been quite concerned about perceptions of South Africa, particularly as they are being projected in international publications.

Speaking to eNews Channel Africa, Gordhan said the impression created by a cover story in the last edition of The Economist was that everyone in South Africa was walking around with sticks fighting in the streets. The country was still on a “sound footing” and largely stable, Gordhan said, and it was everybody’s responsibility to “talk up the economy”.

He said the ratings downgrades by Standard and Poor’s and Moody’s were based on worries about the country’s future rather than current conditions. He also played down concerns over the ANC’s national conference in December, saying the contestation was part of the normal course of democracy and the country would still be on track after Mangaung.

But it is not only the question of leadership elections at Mangaung that is causing jitters but also proposed “radical economic policy changes”. Because of the internal battles in the ruling party, there is no agreement or detail on what exactly these radical policy changes might entail. After the ANC’s June policy conference, there were conflicting messages around the issue of strategic nationalisation, with some people saying there was broad agreement in favour and others denying this.

The Mangaung conference will have to determine exactly what radical economic changes are on the cards and pronounce clearly on the issue of strategic nationalisation. The problem for Gordhan is that he has no influence over these matters or ability to foresee how they will pan out. Gordhan is not even a member of the ANC’s national executive committee, which has some say in directing discussions at the national conference. However Gordhan will ultimately be responsible for rolling out whatever radical policy changes are decided on.

While Gordhan and his team have been trying to maintain fiscal discipline and resisting populist pressures to spend more, they have been coming under heavy fire from Cosatu for being too conservative. The Treasury was blasted at the Cosatu national congress last month and accused of being impediments to “radical economic transformation”.

Cosatu’s central executive committee last week repeated the resolutions taken at the federation’s congress: “The radical economic shift requires that the Treasury, which institutionally constitutes the biggest obstacle to the government’s economic programme, be urgently realigned.”

So far neither the ANC nor government has come out in defence of the Treasury, which leaves Gordhan somewhat exposed. The Democratic Alliance has honed in on the fact that Gordhan and his team have limited powers.

“The major problem with the Budget Policy Statement is that it, once again, highlights National Treasury’s inability to influence macroeconomic policy reform. This is another year where Treasury has been unable to turn their policy proposals into action. Like February’s budget statement, this budget is full of vague commitments to job creation and economic incentives. But over the past few years, we have seen Treasury’s main proposals in these areas blocked by Cosatu on ideological grounds or by the capacity of the ANC government to implement them,” DA spokesman on finance Tim Harris said.

One of the main adjustments to the budget this year has been as a result of the higher-than-expected public service salary increases, amounting to R1.4 billion in national departments and R4 billion in provinces. Gordhan had the carpet pulled from under him earlier this year when, after protracted negotiations, a deal was struck outside the bargaining chamber between Public Service and Administration Minister Lindiwe Sisulu and the unions on above inflation increases for civil servants. The deal was seen as a move to pacify Cosatu’s public sector affiliates ahead of the Mangaung conference.

It remains to be seen whether Gordhan’s Cabinet colleagues and provincial departments take him seriously enough to heed his warnings to tighten their belts and stop wastage. There are to be no additions to the overall spending levels and public expenditure will remain as announced in the 2012 budget.

“To continue serving our people, government departments will need to live within our means. Spending needs to become more efficient and achieve value for money. Wastage of taxpayers’ money must come to an end. Corruption in procurement will be identified and dealt with in the strongest possible manner,” Gordhan said.

One of the ways to improve the effectiveness of government spending and clamp down on corruption through the tender festival in the state will be through the appointment of a chief procurement officer at the National Treasury. Gordhan said the state also needed to address the shortcomings in planning, procurement and contract management that undermine the effective use of funds.

“Cash flows will be linked to actual project delivery, and technical support programmes will be stepped up. If you don’t deliver projects, you don’t get the cash,” Gordhan warned.

While the midterm budget statement was widely welcomed as being prudent in a tough economic climate, the measures to stabilise the economy and cut wastage would only take effect if Gordhan had political backing and more influence in policy decision making. Tough action against wanton spending and corruption in the state will also lend more clout to what the Treasury is attempting to achieve.

Rounding off his speech, Gordhan said: “As a country, we face difficulties, but we are not in terminal crisis. Let us set about proving the pessimists wrong, working together to fulfil our vision for a strong, prosperous and united South Africa.”

Gordhan’s colleagues in Cabinet and comrades in the ANC are the people who have the power to decide whether this is wishful thinking or an attainable goal. On his own, Gordhan is just another optimistic hard-working South African hoping to survive the coming storm. DM