Makause: The activist’s fear of the police and the sunset 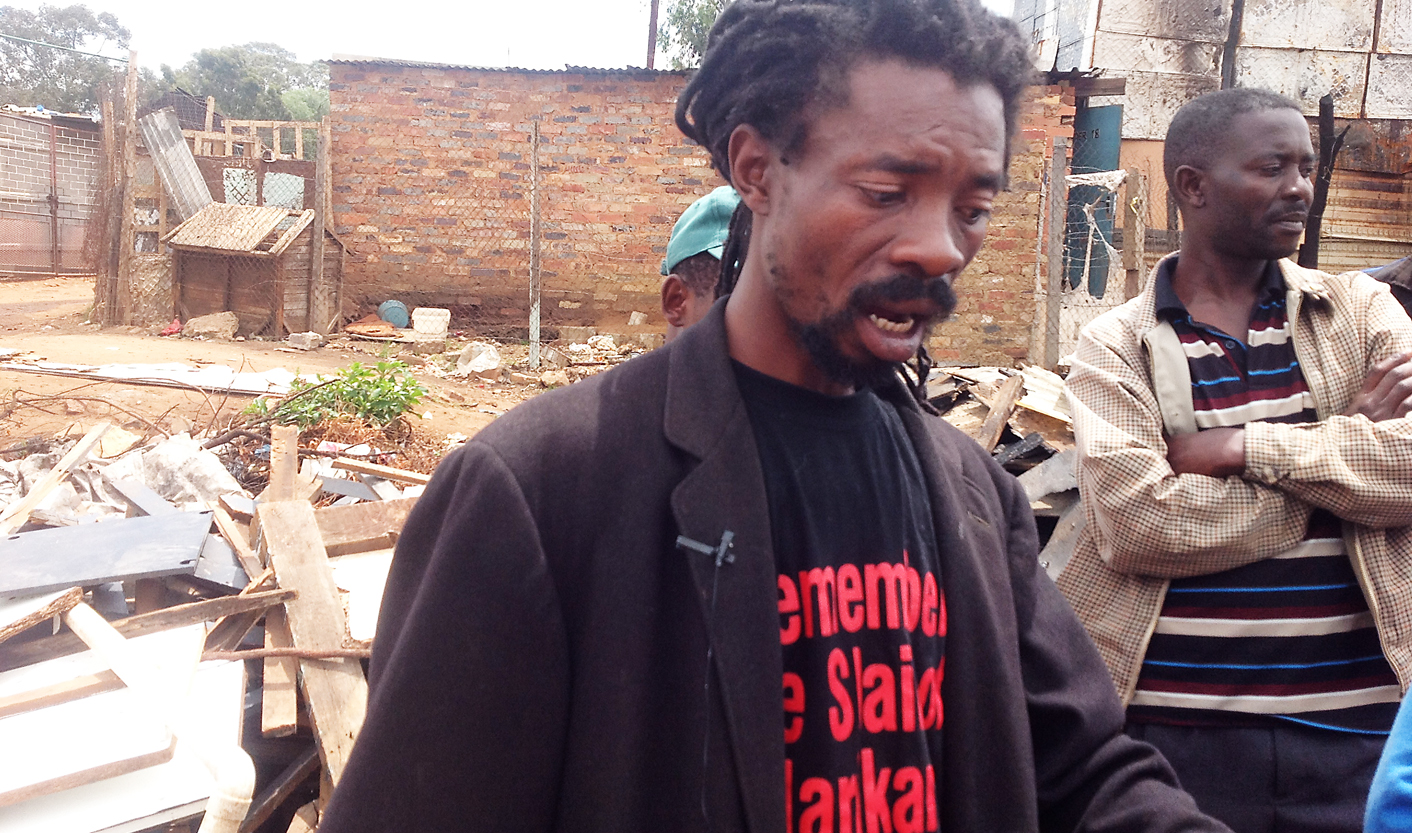 As you read this, General Alfred Moyo, an activist from Makause informal settlement, is hopefully still alive. He spends days in worry and nights in fear for his life. His harassers: the Primrose station police. His crime: standing up for Makause residents’ human rights. By MANDY DE WAAL.

General Alfred Moyo, a community activist from Makause in Primrose, Germiston, who was arrested by police on Friday 19 October 2012 and released on bail a day later, has fled the informal settlement. “I fear for my life. I don’t know what is going to happen. I am stressed and I am scared. I am uncomfortable during the day, but at night I just get scared.”

Moyo was arrested while holding a community meeting on an open sports field. “The police can do anything. They can even hire people inside the settlement to get rid of me. The community has seen everything and they can tell about everything that happened, so the only chance for the police now is to pay someone else to kill me.”

The “everything” happened on Friday afternoon, when Moyo was meeting with community members to discuss what to do when an on-again, off-again march to protest against Primrose police was cancelled a day after it had been approved.

The community has been trying since mid-September to gain permission from local authorities to march in protest against police brutality and the police’s alleged refusal to investigate residents’ cases, but have been thwarted at every turn. The march was given a verbal go-ahead by Metro police on 17 October, only to be banned by the Primrose police station the next day.

“Everyone had been mobilised and the pamphlets were distributed so we decided to have a mass meeting to address the community and discuss a way forward,” Moyo said, adding that the police arrived shortly afterward.

“We told the police we were discussing alternatives to the march and had decided to picket the station. But the police said we couldn’t have a picket there. They said the station was a sensitive area that they must protect it at all costs.” Moyo replied that he was well versed with section 17 of the Constitution and the right to picket or demonstrate. Photo: The police said the residents couldn’t have a picket there. They said the station was a sensitive area that they must protect it at all costs.

He said police had been called in from as far as Springs and the surrounding catchment area to ensure the march did not go ahead. The Makause activist was then told to go with police to the station to talk to the station commander. Moyo and a handful of community leaders were negotiating with police when Nikki Pingo, a project manager for an NGO called Planact arrived on the scene. (Planact runs regular development, learning and support meetings for community representatives and civic movements.)

“General and a couple of others were speaking to the police. There were about three police vans parked at the edge of the sports field. Another police van arrived,” she said.

Moyo and the Makause leaders were negotiating with police when an armoured police vehicle arrived. Law enforcement officers exited and pulled the community activist into the vehicle. The Makause members moved forward marginally, and Pingo said a policeman threatened the crowd. “The policemen pulled out a gun and pointed it at the crowd. He then threw teargas into the crowd and it dispersed.” Photo: Moyo and the Makause leaders were negotiating with police when an armoured police vehicle arrived. Law enforcement officers exited and pulled the community activist into the vehicle.

Earlier this month, Daily Maverick reported that the Makause community leader was verbally attacked and threatened by the police, who asked him why he wanted to bring the force into ill repute.

“The head of visible policing, Col Rackson Shuburi, asked us why we were applying to march against the police. ‘What is wrong with you that you want to challenge the code of conduct of the SAPS?’ he asked us. We told him our memorandum would list all our grievances,” Moyo said at the time. “Shuburi warned me that if we went ahead with the march there would be ‘another Marikana’. He was referring directly to the events at Marikana where the police shot and killed all those protesting miners. He said that the police were ready for us and that if we marched, Makause would be turned into another Marikana.”

The police drove away with Moyo in the Casspir. “We followed the police to the station to find out why General was taken, and when we got there General was taking off his belt, and said he had been arrested. The station commander was very angry with us and said we must leave the police station,” Pingo said, adding that she left the station to call the Socio-Economic Rights Institute of South Africa (Seri), a non-profit rights-based organisation that has a public-interest law centre.

Moyo told Daily Maverick that when he arrived at the Primrose police station the station commander was in the boardroom with brigadiers and regional heads of police. He was called into the room. “I did not know the others. The only one I recognised was (Gauteng Provincial Commissioner Lt Gen Mzwandile) Petros.

A handful of people from Makause had gathered and were now standing outside the station. Nkhwashu picked out a young man and woman who were both wearing T-shirts in support of those slain in the Marikana massacre from the crowd. The T-shirts read: “Women demand justice for Marikana” and “Solidarity for the slain of Marikana”, as well as “An injury to one is an injury to all”.

“I went in to try and go to the bathroom to get water when I saw the two people were arrested,” Pingo said. The pair had been stripped of their Marikana T-shirts and forced to stand half naked in the station. As one, a shy woman, tried to cover her torso with a blanket, a policeman at the Primrose police station was alleged to have chipped in: “I don’t know why that woman is acting so shy. It is in our culture, it is natural to show breasts.”

Pingo challenged the station commander, asking why the pair had been arrested and exclaimed it was unacceptable that the young woman had been made to stand exposed. “She (Nkhwashu) told me to get out of the police station,” said Pingo.

There was another brief exchange in which Nkhwashu threatened to arrest Pingo, who then tried to run out the station. As Pingo exited the station, Nkhwashu ordered that she be arrested.

The police took the Marikana T-shirts saying that these would form evidence for a charge of incitement to cause violence. “They took my phones, my camera and my memory stick,” said Moyo. “They said they will make sure they will bring charges against me because they are in power. They can implicate me with anything to ensure I don’t get out and that I don’t even get bail”

As the charge sheets were being filled out Moyo said police listed his address as “no fixed address” and declared that he had no relatives so that he and the other Makause residents wouldn’t get bail.

Moyo, Pingo and the two other Makause residents were detained overnight because police said they couldn’t get a public prosecutor out on a Friday night. Charges levelled against the four include harassment, intimidation, malicious damage to property, resisting arrest and obstructing the police.

Seri obtained expert legal assistance, and the next day the four were released on bail of R1,000 each. “The police told the lawyer that we were all charged with public violence because this charge requires a prosecutor to get bail. With the other charges they wouldn’t need a public prosecutor, and so we had to stay overnight, ” says General.

The four appeared in the Germiston magistrates’ court on 22 October and waited some three hours for the dockets to be brought from the Primrose police station. After a short hearing, the case was postponed until 19 November.

“The charges are baseless, there is no evidence and it is shocking that the prosecutor is allowing police to go ahead with an investigation into these charges,” said Kate Tissington, a senior research and advocacy officer at Seri. “We’ve seen this before with activists. It is a common police tactic to try and crush activists, to tie them up in the legal system. To beat the fight out of them. The other thing is who can pay bail? So people just sit.”

Moyo is out, but no longer sleeps in the community at night because he fears for his life. His life now is about trying to find a place to stay while shuffling back and forth to try and support the community at Makause.

Daily Maverick called Nkhwashu, but she refused to speak to the media and referred the story to an SAPS spokesperson. The spokesperson, Col Mogale, said questions must be submitted by email and that it would take 24 hours to respond, outside of Daily Maverick’s deadline. DM