Doom and gloom from the Mo Ibrahim Foundation: no winne...

Doom and gloom from the Mo Ibrahim Foundation: no winner, and South Africa in decline 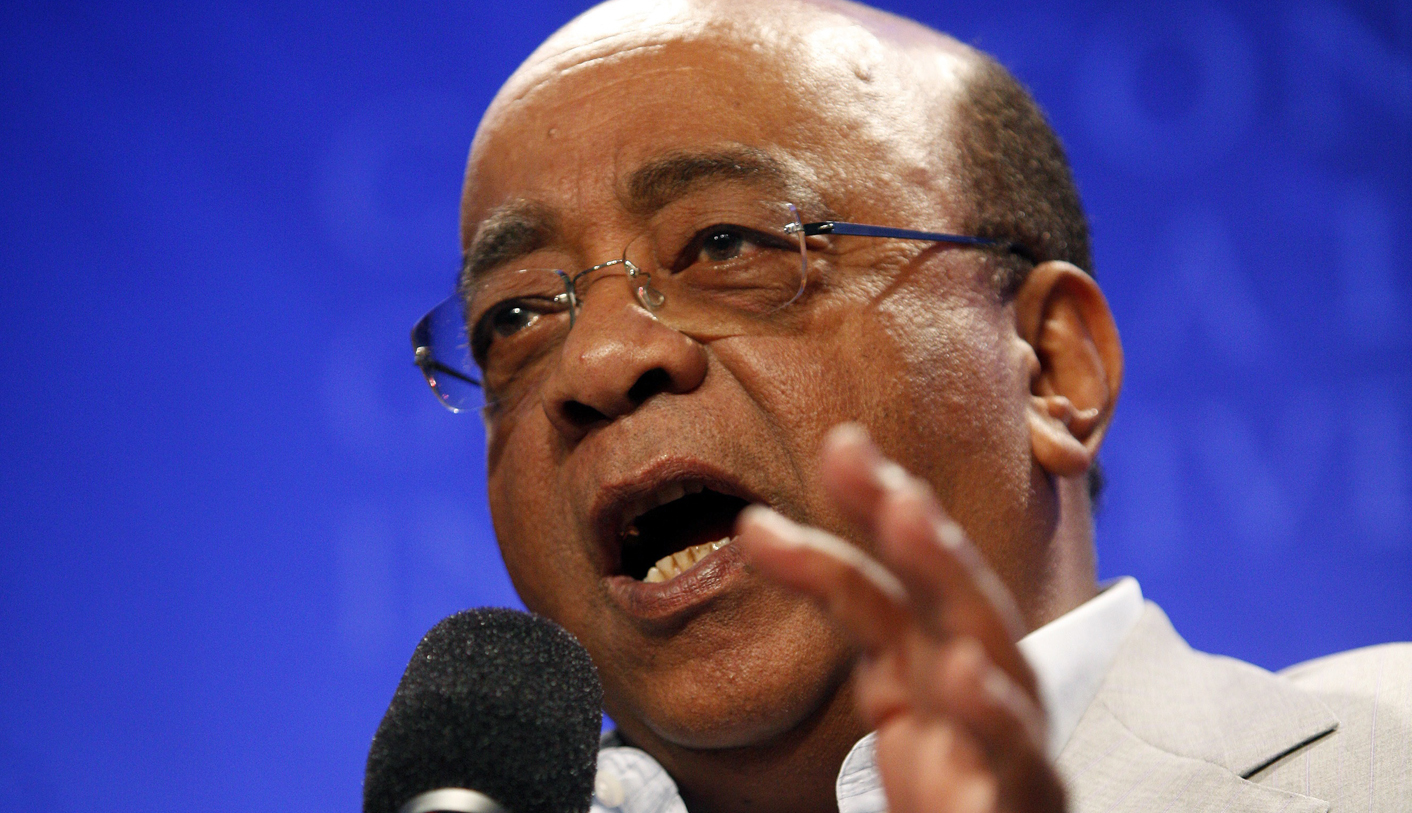 Although they tried to remain upbeat, there wasn’t much good news from the Mo Ibrahim Foundation as they announced the results of their annual governance assessment and awarded – or, more accurately, failed to award – their $5 million leadership prize in London on Monday. By SIMON ALLISON.

Most people know Mo Ibrahim, if they know him at all, as the rich guy behind the world’s biggest prize for politicians, the $5 million Ibrahim Prize for Achievement in African Politics, which is given to a former African president who governed exceptionally well. This isn’t entirely fair; the Sudanese engineer made his billions as one of the first people to bring mobile telephone networks to Africa, and as such deserves a large slice of the credit for the continent’s mobile revolution.

Still, it is his post-business career dedicated to improving the state of African governance that has garnered all the headlines. It will pain him that on Monday most of these headlines will be negative.

Monday was the day that the Foundation announced the winner of this year’s Ibrahim Prize, as well as the results of the Ibrahim Index of African governance, currently the most comprehensive statistical assessment of the state of Africa’s nations. Neither announcement was particularly easy.

For the third year in its six year history, the Prize Committee – composed of luminaries such as Mohamed ElBaradei and Salim Ahmed Salim – failed to find any former leader who measured up to their strict standards.

“The Prize Committee reviewed a number of eligible candidates but none met the criteria needed to win this Award. The Award is about excellence in leadership. In the first six years the Prize Committee has selected three very worthy Laureates who continue to be an inspiration and whose examples, we hope, will be emulated,” said a statement from the Foundation.

It was never going to be easy to find candidates every year, and that was never the Foundation’s intention. The criteria are designed to reward the exception rather than the rule. Still, the Foundation’s intention was most definitely to improve the very negative perceptions of governance in Africa, and the repeated non-award of this prestigious prize is hurting that goal, no matter how many times an exasperated Mo Ibrahim explains the technicalities.

Then there is the Index, which is the most robust of the Foundation’s initiatives, measuring 88 different indicators of various aspects of governance and using a number of data sources to try and make the statistics more reliable (African statistics are notoriously scarce and inaccurate). By their nature – coups and secessions excepting – governance trends move slowly, and there’s often little difference year to year in a particular country’s performance.

Over time, however, trends become visible. This year’s index revealed a particularly disturbing one: that Africa’s powerhouses – specifically South Africa, Nigeria, Kenya and Egypt – have declined in overall governance performance over the past six years. The problem is particularly pronounced in two of the index’s four main categories, Safety & Rule of Law and Participation & Human Rights.

“Given the vast natural and human resources of these four regional powers, these governance results are a concern. Each of these countries plays a key role in the economic and political landscape of the continent. To continue to optimally play this role requires a sustained commitment to balanced and equitable governance,” said Abdoulie Janneh, head of the United Nations Economic Commission for Africa, commenting on the results.

A more detailed assessment of the results was impossible thanks to another bit of bad news for the Mo Ibrahim Foundation: on the highest-profile day of their year, their newly-redesigned website crashed, leaving journalists and analysts unable to retrieve the information. The Daily Maverick, however, was able to obtain the specifics of South Africa’s performance in the Index. It doesn’t make good reading. Essentially, over the last ten years, South Africa has stagnated, with minor improvements in some areas and minor declines in others. Most disturbing were the overall declines in Safety & Rule of Law and Participation & Human Rights; and the country’s absolutely abysmal score in the Personal Safety, where South Africa is ranked 41st in Africa with just points out of 100. According to this data, it’s safer in Mali and Guinea-Bissau than in South Africa (of course, these statistics are skewed by the very fact that South Africa does produce relatively reliable statistics, as compared to other African countries who often underestimate their problems).

Despite all the bad news he had to relay on Monday, Mo Ibrahim remained optimistic. “You should not be discouraged,” Ibrahim told the press conference in London. “In general, we are making progress.” DM

DISCLAIMER: Simon Allison worked for the Mo Ibrahim Foundation from 2009-2011.