Peugeot 208: A package of surprises 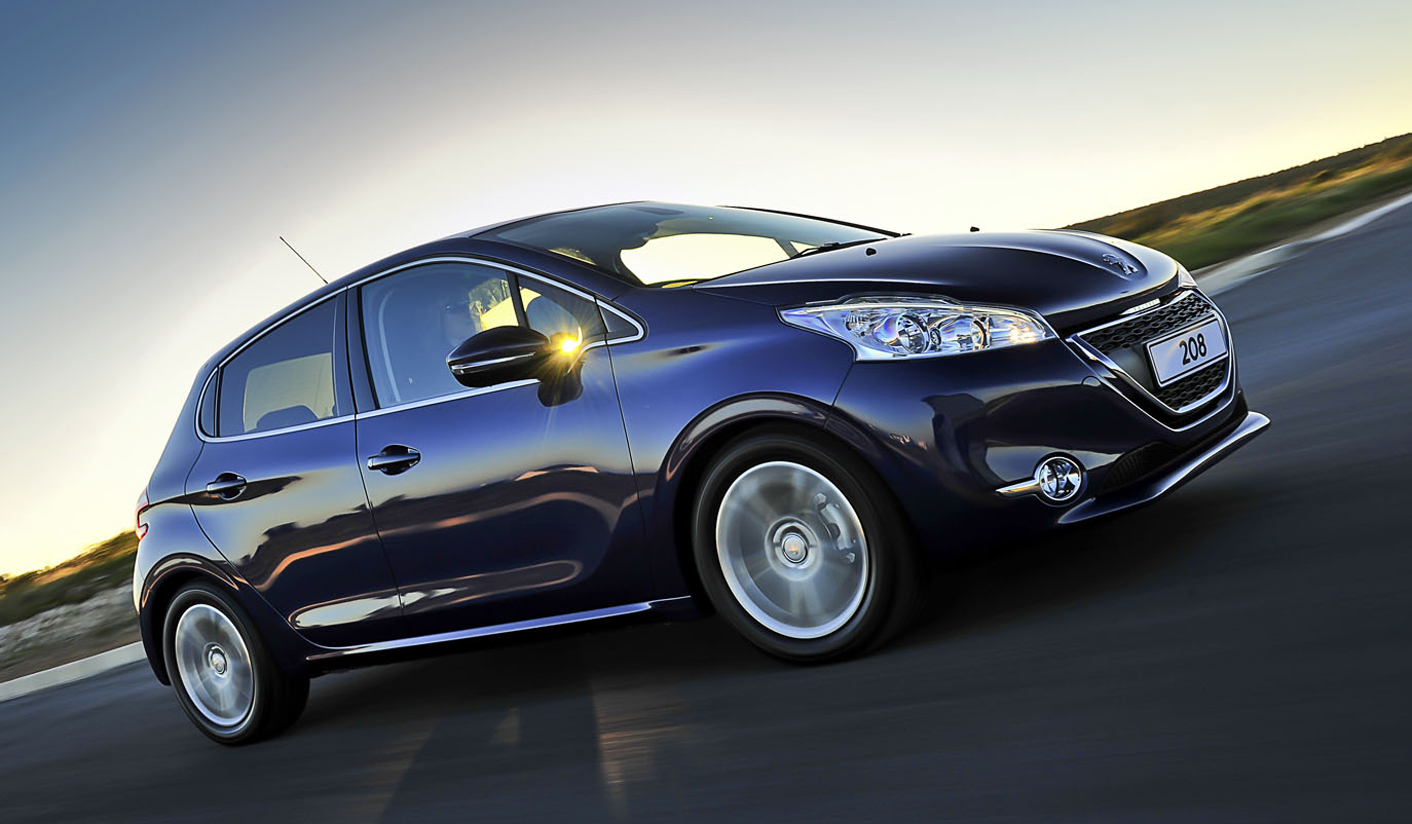 Peugeot’s 208 hatchback is its most important protagonist in decades – a subcompact that’s meant to capture the hearts of global car buyers just as market sentiments start favouring smaller, more frugal models. But to succeed – and to put the Peugeot marque back on track – the 208 needs to be an extraordinary contender in a crowded segment. By DEON SCHOEMAN.

It’s easy to become distracted when you’re driving the quiet country roads that link the metropolis of Cape Town to the much less populated landscapes of the West Coast. At this time of year, the often drab backdrops are lit up by vast swathes of yellow, orange and purple.

This spectacular display of nature’s bounty, also known as the flower season, annually attracts tourists from across the globe.

But the bright hues are not the reason why I find myself on a lonely road linking the farming town of Moorreesburg to the fishing village of Paternoster. Instead, I’m here to drive Peugeot’s new subcompact car.

The 208 is the latest in a long and illustrious lineage of small hatchbacks bearing the famous Lion trademark. Its combination of compact dimensions, striking styling, dynamic chassis and trend-setting interior ergonomics has been favourably received internationally, and Peugeot South Africa is hoping that the local response will be equally enthusiastic.

The demands on small cars are onerous. The subcompact segment is heavily and competitively traded, with price being one of the key factors in the buying decision process. But affordability is only one item on the wish list: these are champagne buyers with little more than beer money in their pockets.

They want striking and trendy styling, an interior filled to the brim with convenience and safety features, enough muscle to deliver brisk performance – and miserly fuel consumption.

The result is a generation of keenly configured small cars that has left the motoring public spoilt for choice. Korean marques like Kia and Hyundai have been able to leverage production efficiencies and ever-improving quality to field highly competitive contenders in this segment.

That’s left stalwarts like Volkswagen and Toyota relying as much on brand awareness and loyalty as on product appeal to attract buyers. Peugeot’s European sourcing infers a level of superiority, but the French marque hasn’t been as successful in South Africa in establishing the reputation for quality that Volkswagen, for one, trades on. The 208’s arrival, therefore, has greater significance than the mere fact that it is new. With by far the greatest volume potential in Peugeot’s local line-up, the hatchback could become an important ambassador for the brand.

It certainly has presence. In flagship Allure 1.6 form as tested here, the styling creates initial impressions of robustness and sporty appeal, using sculpted lines and finely honed details to enhance the hatchback silhouette.

Gone is the gaping grille that was Peugeot’s most recent attempt at creating a brand identity. Instead, the hexagonal, meshed aperture has more balanced proportions. The multi-element headlight clusters, featuring xenon and LED daytime running lights, have a complex, even organic shape, while the deep front airdam and bright fog lamps add further visual appeal.

The bonnet gets a U-shaped crease that embraces Peugeot’s stylised lion emblem, while the windscreen’s steep rake and generous expanse suggests both keen aerodynamics and good visibility.

The 208’s profile strengthens the impression of aerodynamic efficiency, thanks to a sloping roofline, sculpted flanks and smoothly accentuated haunches. It makes the hatchback look reassuringly stable and settled. Compared to its 207 predecessor, there’s more visual substance, too.

The rear is perhaps the least memorable aspect of the car, with the extended rear bumper and relatively small rear screen resulting in a measure of blandness. The prominent tail light clusters do add some visual appeal, as does a small spoiler at the screen’s upper edge.

Most of all, though, the 208 is unmistakably Peugeot – and attractively so. There’s just enough character and style to elicit admiration, without straying into idiosyncratic territory, while also creating a sense of premium execution.

The use of small but crafted Peugeot badging front and rear is a subtle but particularly deft touch at a time when brash branding has often become the norm.

That sense of premium quality extends to an interior that is both welcoming and unexpectedly innovative. The textures and surfaces have substance and tactile appeal, while the cabin’s generous glass surfaces create an airy, roomy impression.

But it’s the dashboard that best epitomises the underlying innovation of the 208. Settle into the bolstered, instantly comfortable driver’s seat, and you’ll notice how the small the steering wheel is – and how it accentuates the raised instrument cluster behind it.

Instead of framing the dials, the steering wheel is set lower, so that the circular instruments for speed and rev count (and the digital trip computer display between them) are in an unobstructed line of view. The steering wheel itself is thick-rimmed and sporty, while offering a home to switchgear for the audio system and the cruise control.

It’s an ergonomic arrangement that’s not instantly intuitive, but that makes perfect sense once you’ve spent a little time finding the right combination of seat height, and steering wheel reach and rake.

Given the vast storage potential of these devices, the screen’s generous dimensions make for easier access and content navigation, while the touch screen interface adds to the system’s overall appeal. The cabin’s appeal extends beyond its ergonomic excellence. The Allure top model is filled to the brim with mod cons, ranging from electric windows and mirrors to remote central locking, climate control, and the top-notch entertainment and communication system already mentioned.

Small cars and safety are no longer mutually exclusive concepts either, as evidenced by the 208’s six-airbag passive safety system, along with ABS brakes, and electronic stability and traction control.

Accommodation is roomy by subcompact standards, and while rugby forwards will find the rear bench seat less than comfortable, normal mortals will fit in easily enough. The boot is average, but the full-size spare wheel is a welcome boon.

The 208 range offers a choice of two engines, both combined with a five-speed manual gearbox. The top-end Allure’s powertrain employs a 1.6-litre four-cylinder engine rated at 88 kW and 160 Nm.

There’s also a new-generation three-cylinder engine, offering 60 kW and 118 Nm from its 1.2-litre capacity. It’s perhaps the more innovative of the two and also the most frugal, with a miserly combined-cycle fuel consumption of 4.5 litres/100 km, while CO2 emissions come to just 104g/km.

Both engines employ variable valve timing to smooth out unwanted peakiness and deliver decent shove across a wider rev range, but don’t expect straight-line fireworks from either. If anything, it’s the three-cylinder that feels punchier in the midrange.

Having only driven the cars at sea level, it remains to be seen just how much of the drivetrain’s enthusiasm is carried through to its dynamics at Reef altitudes. However, they do enjoy being revved, and the gear ratios find a decent compromise between response and cruising capability.

For me, however, it’s the chassis that shines brightest. Despite a steering feel that’s on the light side (thanks to the electric power assistance), the 208 is a joy to drive in almost all circumstances. Its underpinnings feel reassuringly solid and composed, with enough damping to cope with uncompromising surfaces. There’s a pleasing plushness to the ride that adds more points to the comfort score book, but without robbing the car of an inherent agility. At speed, the chassis displays a tautness that comes in handy when caning the car through mountain pass corners.

Indeed, the harder you push the 208, the better it gets. Overall composure is exemplary, with an ability to toe the chosen line when many other compacts would have pushed their noses wide into speed-scrubbing understeer.

Vitally, the driving experience isn’t only competent, but also entertaining. The 208 enjoys being driven with gusto, and shares that joy with its pilot. It really is a fun car to drive.

As a package, the 208 surprises and convinces on most levels, while addressing the key elements that determine buyer appeal in the small car segment. It links designer looks to a superbly executed interior, innovative ergonomics, a lively but frugal pair of drivetrains and lots of dynamic appeal.

Those are exactly the traits required of a successful subcompact, while the pricing (starting at R154,900 for the entry-level 1.2 Access) is keen, too. Add a five-year/60,000 km maintenance plan, and the Peugeot 208’s sales prospects appear bright indeed.

It’s the perfect opportunity for the brand to create a stronger and more compelling presence in the market – an opportunity one hopes its dealer network will embrace with all the enthusiasm the 208 deserves. DM