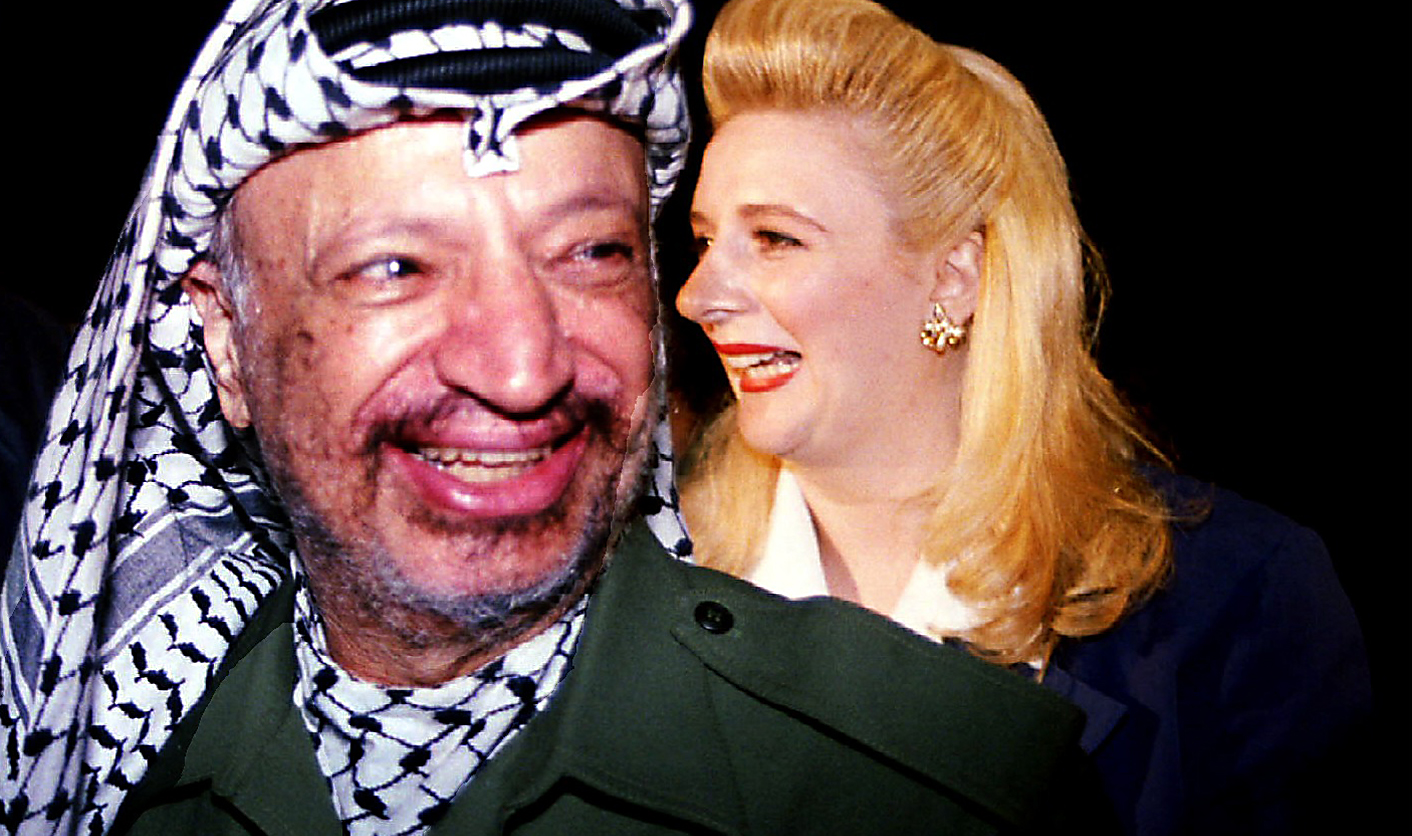 Yasser Arafat died in France in 2004 after falling suddenly and catastrophically ill. Doctors said a stroke did him in, but in a world of conspiracy theories that can only mean ‘Israel did it!’ Two teams are now looking to put the rumours to rest; no one dies of a stroke in the Middle East. By RICHARD POPLAK.

The West Bank, 2009. Ramallah is a cluttered city, jammed with honking vehicles and pedestrians who have invented their own capricious traffic laws. While I wait for Nisreena, the Fixer, to pick me up, I watch yellow cabs and Sprinters turn in and out of the station – from the sky, this scene must resemble a hive of insects crazed by the loss of their queen.

I’m an absolutist when it comes to architecture as a representation of the prevailing ethos of any country’s ruling party. Ramallah, during and after the Arafat era, is a mess. Cronies were given the building contracts, codes were flouted, the old buildings that housed the city’s residents were razed, some courtesy of the Israelis and their skilled bulldozer technicians, others to make way for development. Concrete structures that make no architectural, structural, or aesthetic sense were built in their stead.

Ramallah is a city that perfectly explicates what the Palestinians and Israelis are capable of when they work together. It has two topographical features – up and down – and the city’s hills, once verdant, are littered with rubble and ghastly apartment blocks with green-tinted windows, topped by oriental gazebos – an architectural style so lacking in sense and good judgment that it can but only be an indictment of the regime that approved the plan in the first place.

Our first order of business is the paying of respects, such as they are: a visit to Yasser Arafat’s tomb. In the way of the fixer, Nisreena has quick, quiet chats with the guards, and they obediently stand aside. Arafat lies under what looks like a partially built Ikea demo kitchen. Wreaths are the only thing that give the tomb away – his final resting place is still under construction. The courtyard, in front of the compound, called the Muqata, where Arafat spent the final years of his life under permanent siege, is asphalt, dominated by two helipads. “He liked helicopters,” says Nisreena, when I comment on them.

This idyllic resting place is about to be disturbed to solve once and for all the conundrum of Arafat’s death. That he was a 75-year-old man who had been under house arrest for years before he died of what French medical records said was a stroke is not good enough for his widow, Suha. Principally known for her shopping expeditions and mistrusted for her seemingly expedient conversion from Christianity to Islam, Suha has been advocating for further investigation her husband’s death since the moment he breathed his last.

Fatah leadership in general, and Palestinian Authority President Mahmoud Abbas in particular, have always viewed Suha as an embarrassment and an emblem of a less technocratic and more colourful age, aka the ’70s. They’ve wanted her mixing it up with Arafat death rumours like they want a Saudi invasion of Gaza, but now, they’re left with little choice.

Because Arafat was an Arab leader, and because he died outside the Middle East, conspiracy theories are as mandatory as a death shroud. Was he killed by Zionist agents? Did he die of Aids? Did he choke on a Skittle? But mostly, was he killed by Zionist agents? No one in the history of the Middle East has died of natural causes, much less a stroke following “inflammation, jaundice and a blood condition known as disseminated intravascular coagulation.” In 2010, a Swiss lab conducted a series of experiments on Arafat’s clothing and found evidence of the deadly radioactive isotope polonium-210. That’s the stuff that killed ex-KGB and FSB agent Alexander Litvinenko in London in 2006, ushering an “age of nuclear terrorism,” according to a statement from the doctors who watched him melt from the inside.

The polonium trail ended at a tea cup, which Litvinenko sipped from almost three weeks before his death. He was a physically fit 55-year-old man, and there was no doubt surrounding his murder, other than the identity of his killers. (There are many candidates, although the British claim to know exactly who did it and how.) Suha Arafat believes her husband was similarly murdered and, despite refusing to allow an autopsy at the time, handed a bunch of laundry to the Institute of Radiation Physics in Lausanne, Switzerland. “We measured an unexplained, elevated amount of unsupported polonium-210 in the belongings of Mr Arafat that contained stains of biological fluids,” François Bochud, head of the institute told Al-Jazeera. Time is of the essence, according to Bochud, because polonium decays, and along with it the proof of Zionist malfeasance.

The Palestinian Authority has agreed to an exhumation, at a date it refuses to disclose, but it has hired its own team because it trusts Suha about as far as Abbas can throw her Prada shoe collection. So the French CSI folks will be joined by a Swiss team, an all-foreign outsourced line-up that has many Palestinians fuming.

Tawfik Tirawi is head of the PA committee investigating the death, and he insists the grave will be opened only once and that both teams will need to draw their samples in that brief window. Arafat’s remains will be taken to a Ramallah hospital, where the delicate work will be undertaken. “Due to the particular situation, there will probably be no media coverage. It’s very difficult to allow journalists to be around because of all the difficulties of the operation,” Tirawi has said, which will be a nice way of extending all the secrecy and allowing the conspiracy theories, regardless of the outcome, to endure for many moons to come.

Make no mistake, Israel was not sorry to see Arafat go. In 2003, Ehud Olmert, then deputy prime minister, made it quite plain that murder was on the table. But the Israelis have been unusually forceful in their denials. The PA’s administrative headquarters, the Muqata, during the siege was a not exactly a hotbed of hygiene, considering the fact that 270 people were confined behind its walls. Arafat’s room was small and windowless, and rare was the night that he didn’t sleep pell-mell alongside his comrades. In other words, not a place for a 75-year-old man. By the middle of October 2004, Arafat was gravely ill, and on the 29th of that month, he was flown to Paris, where he died.

If Arafat did die of polonium poisoning, there is also the question of how the operation was pulled off. According to Tirawi, there was no way for the Israelis to know what food Arafat was going to eat, and when. If they did it, they had inside help from a collaborating Palestinian, which seems unlikely in a compound in which most people were vetted and knew each other well.

Which would mean – and here’s something that Suha seems to be missing – that the siege killed Arafat. Israel is thus responsible, or at the very least culpable in his death, so everyone leaves happy. One can’t help but think that this investigatory pageant is more about Suha playing silly balls with the PA and the settling of old scores. There is no way that Israel or its allies would accept the validity of these two battling investigations, so the outcome is effectively meaningless.

That said, one can’t help thinking that the old war horse would have enjoyed all this sturm und drang. He was never one for peaceful sleep, or peace of any kind. It’s the final resting place he earned, and the exhumation he deserved. DM

Photo: PLO Chairman Yasser Arafat and his wife Suha arrive in Cairo late July 11, 1994, to spend their last night of exile before going to his homeland Gaza. (Reuters)