Police to people of Makause: 'March and there'll be ano...

Police to people of Makause: ‘March and there’ll be another Marikana’ 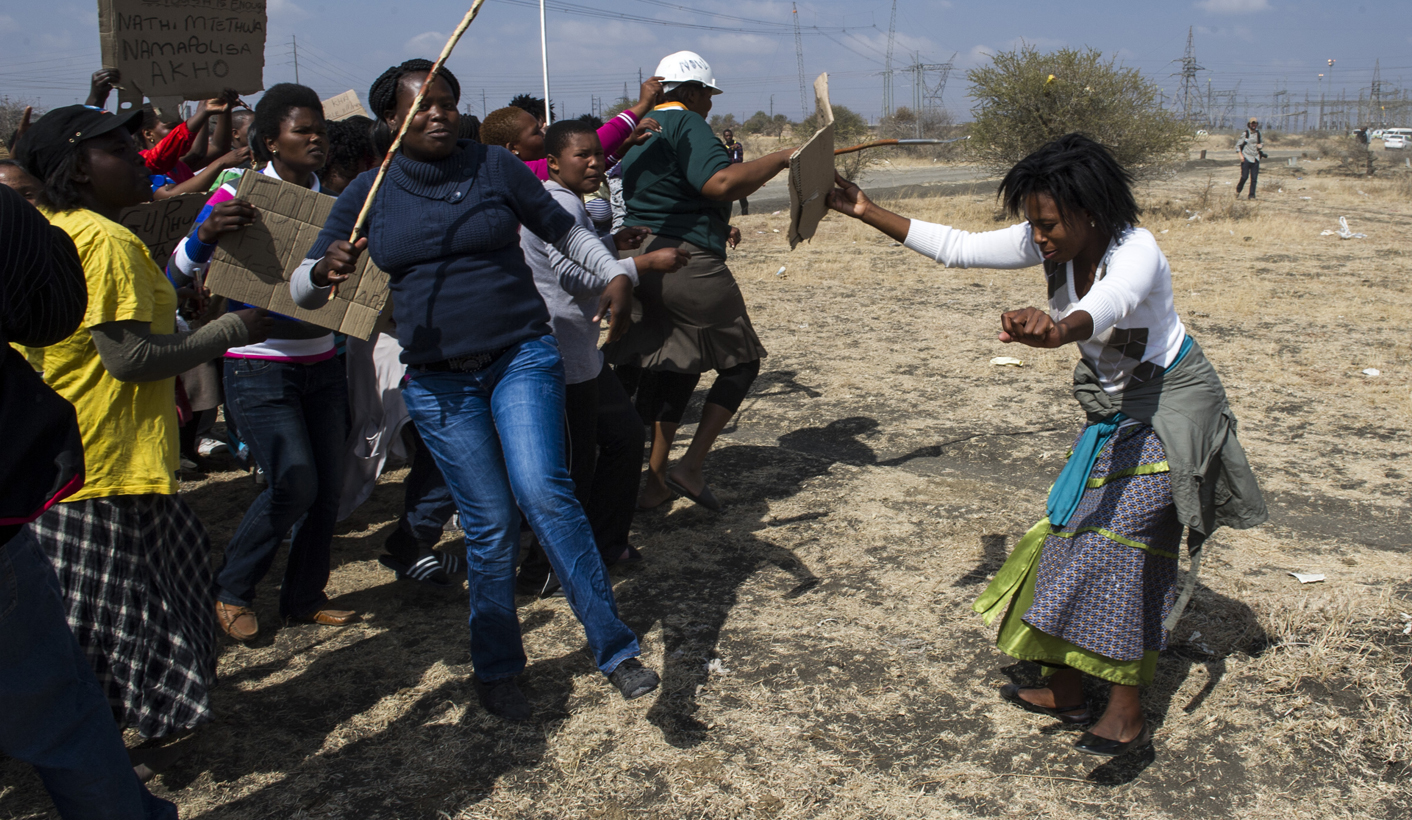 The road to Mangaung looks like a movie production these days, and every visible move is being played out in the national media. But far away from headline news, in places like Makause on the East Rand, the daily skirmishes for power unravel unseen. Here, community leaders say they’re being threatened by an ANC-aligned police force that’s trashing their right to gather, and make their voices heard. By MANDY DE WAAL.

“The SAPS in Primrose are not responding positively to the cases that have been forwarded to them for their attention,” says ‘General’ Alfred Moyo from the Makause informal settlement, located in Primrose in Germiston on the East Rand, where people want a better life. There’s no access to formal sanitation, no electricity, and access to water is fraught. To make matters worse, says Moyo, the police don’t react to residents’ complaints, and reported cases of crime (like theft, violence and mob justice) are just ignored by the police. Moyo is a leader of the Makause Community Development Forum, which wants to march to the SAPS station in Primrose to protest against police brutality and the police’s alleged refusal to investigate residents’ cases.

“The problem in Makause is that there is an unruly mob that is well-supported by the ANC and the police, but which doesn’t have the support of the community in Makause,” says Moyo, speaking to Daily Maverick on the phone from Primrose. Moyo says that this mob’s agenda is political and that it is trying to “delegitimise” the Makause Community Development Forum, which is working with people in the informal settlement to agitate for better services, and to ensure they are aware of their Constitutional rights.

“We have applied with the police and the Metro police for permission to march to the Primrose police station, but the police there just threaten us,” says Moyo, who adds that the leaders of the community forum have been negotiating with police management at the Primrose station and the municipal Metro police to gain the go-ahead for a legal march.

“We approached the SAPS and obtained a form from the Metro police. We filled in the form, filed it with the police and notified the office we intend marching to, which is the Primrose police station. This was done on Friday 19 September, and we were told to come back and see the station manager. We went back on Wednesday 26 September where we met with the station manager, head of visible policing and two other police officers,” Moyo says.

The Makause community leader says that during the meeting he was verbally attacked and threatened by the police, who asked him why he wanted to bring the force into ill repute. “The head of visible policing, Colonel Rackson Shuburi, asked us why we were applying to march against the police. ‘What is wrong with you that you want to challenge the code of conduct of the SAPS?’ he asked us. We told him our memorandum would list all our grievances.”

The community leader says the police were at the ‘container’ office of the Makause Community Development Forum on Thursday 04 October to interrogate organisers about the march. “The police were here to find out what we intend doing, and they said if the march goes ahead they will arrest me and they will personally come after me. I think they were here to show us that the police are ready to shoot us.”

Makause has been an informal settlement since 1992, and the population there has spread to some 12 or 13 thousand people. There was no ‘legal’ water supply until August 2008, when the local municipality installed two taps on the outskirts of the settlement. “We won’t wait for government to help us. We got water through our own initiative. We connected to the very same pipes that are running through our settlement. There are water pipes encroaching and we knew we had a Constitutional right to water. We can fundraise and organise for ourselves to get the basic services we need.”

Moyo says few houses have electricity, and these connections are mostly illegal. For the most part, people in Makause struggle with pricey generators, primus stoves and candles. “It is a massive challenge to struggle with paraffin and candles. There are challenges when the petrol price goes up and we have to pay more because we use generators. To get a proper connection of electricity and water – we don’t demand this from the government because we as the community want to develop ourselves.”

The Makause Community Development Forum is an informal, non-politically aligned structure set up around 2007 to deal with evictions and threats of forced removals against the community. “We were attacked by the ‘Red Ants’ and the police, but we created this informal structure to represent the community. We were challenging and fighting the evictions, but our direction has now extended to champion the improvement of services in terms of the development of the entire community. Now we stand for the provisions of essential and Constitutional rights for our community,” Moyo explains.

The community leader alleges that the ANC wants to gain control of the community because the land they are living on has been earmarked for development and there are lucrative contracts up for grabs.

“This ANC mob tried to break into my shack and destroy my shack in the middle of August, but I was away in Magaliesburg. My family phoned the police and they took the entire mob, to address them, but when we tried to make a case the police just gave us challenges. For days we tried and then eventually we got a case number, but there has been no response from the police. The secretary of our organisation was also apprehended and threatened by this mob, but the police have ignored us. That same mob went to our community office and destroyed it, and the police have done nothing,” says Moyo.

“It is a political matter,” he adds. “The ANC wants to de-legitimise us and replace our leadership in the community. That is why we are under threat. In May last year during the municipal elections the same thing happened, they were trying to overthrow us.” The ward that is represented by Makause is now under DA control, although Moyo is emphatic that neither he nor his organisation supports the DA.

Daily Maverick phoned the Primrose police station for comment but the station manager wasn’t available, Shiburu was on leave and the communications officer was away on communications training.

As the broader battle for Mangaung continues, Makause is the perfect metaphor for the skirmishes for control at a grassroots level. DM