Mo Ibrahim’s ‘extraordinary’ (and well-timed) award to the Arch 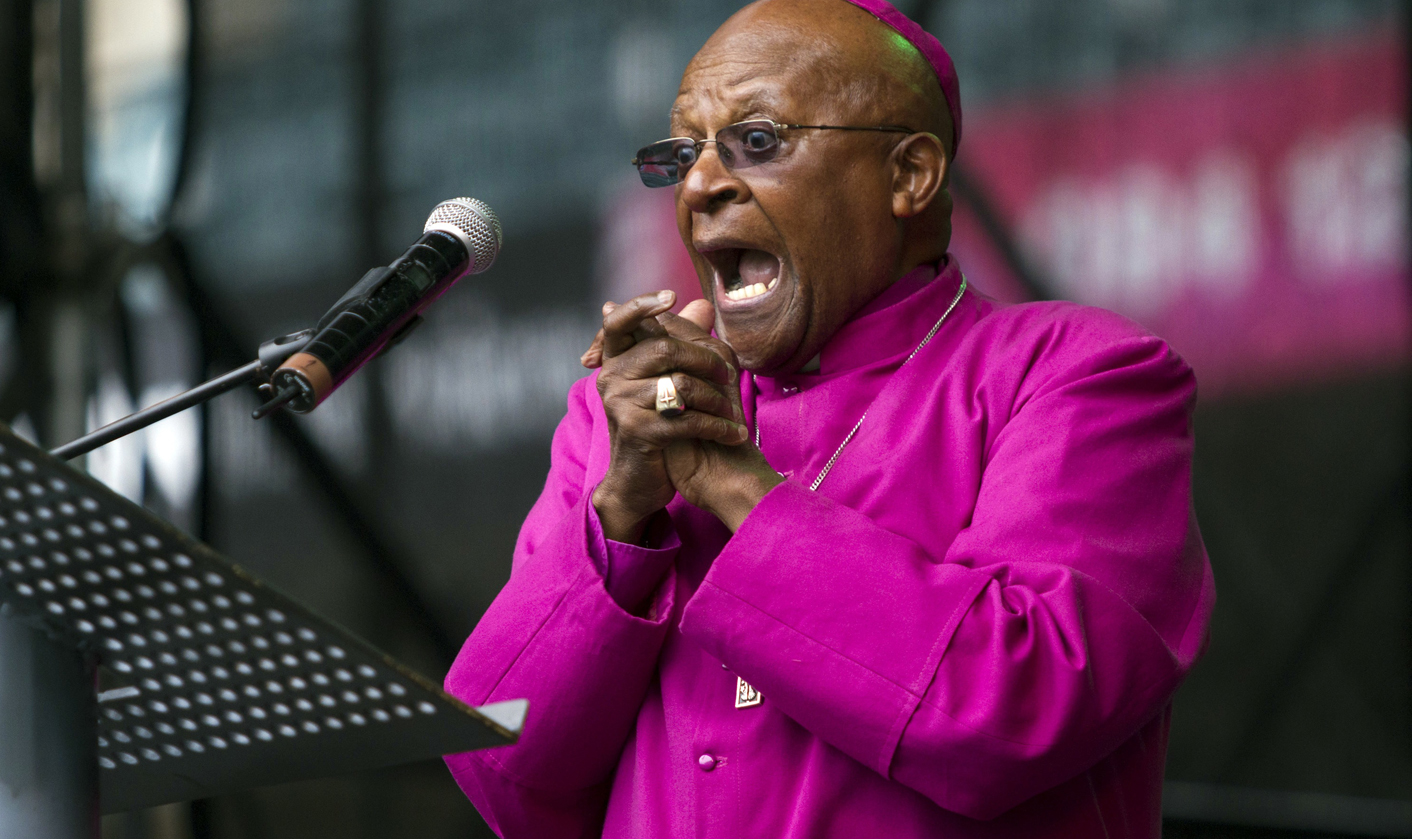 The Mo Ibrahim Foundation has had trouble awarding its prestigious Ibrahim Prize in the past (exceptional African presidents are hard to come by). Cynics wondered if Thursday’s award to Archbishop Desmond Tutu was designed to distract from another barren year, but no one really minds if the Arch has a tidy $1 million to spend as he likes. By SIMON ALLISON.

The Mo Ibrahim Foundation made a flying visit to Johannesburg on Thursday, stopping just long enough to feed journalists a wonderful three-course lunch and award everybody’s favourite African a special, one-off, extraordinary prize. No, not Nelson, they’ve already made him an honorary laureate of their prize for African presidents (that’s the famous one that comes with a whopping great cash bonus and for which it can be rather hard to find candidates). That, of course, leaves Desmond Tutu.

“We made this award in recognition of his lifelong commitment to speaking truth to power,” said Mo Ibrahim. Fortunately for the Arch, whose probably got enough awards to be getting by with, this one also comes with a cash prize: a $1 million grant, which he is free to spread amongst his various charities and foundations.

The Board of the Foundation, which includes new appointee Jay Naidoo (a Daily Maverick contributor), issued an even stronger commendation: “Archbishop Desmond Tutu is and has throughout his life been one of Africa’s great voices for justice, freedom, democracy and responsible, responsive government. In everything he stands for, says, and does, he displays a consistent determination to give a voice to the voiceless and to speak the uncomfortable truth.”

Mandela’s honorary laureate and Tutu’s award are the only ad-hoc commendations the Foundation has issued in its six-year history – a good run for South Africans. “Can South Africa continue to produce such marvellous people?” Mo Ibrahim asked. He would never say it, but it’s a fair bet that neither Jacob nor Julius are likely to receive any of his prizes (neither, infamously, was Thabo, who is apparently still fuming about the decision).

However, the exceptional nature of this award does raise a few questions: why Tutu, and why now? Especially given that the Foundation’s major media event of the year – the announcement of the Ibrahim Prize and the launch of the Ibrahim Index – is in less than a fortnight. Indeed, suspicions in the press corps were high that the recognition of Tutu was a smokescreen to distract us all from another year where the Ibrahim Prize would not actually be awarded.

This speculation visibly irritated Ibrahim. “Andrew, maybe you were not listening carefully!” he said, chastising the BBC’s Andrew Harding for bringing it up. Ibrahim explained that the annual Ibrahim Prize had absolutely nothing to do with this one-off award, and that as he was not part of the Prize Committee he had absolutely no idea whether a prize would be awarded or not this year.

This is technically true – I can vouch for the fact that Mo Ibrahim maintains a strict separation from the deliberations of the prize committee – but it is slightly disingenuous. To clarify, the prize is awarded to a former African head of state who has left office in the last three years and who was exceptional while in it. Anyone can work out potential candidates, and assess their viability.

Most prominent of the new contenders this year is Zambia’s Rupiah Banda, who surprised most onlookers by gracefully accepting defeat in elections last September (of course, most foreign onlookers are surprised any time any African leader gracefully accepts defeat). However, his reputation has subsequently been tainted by allegations of corruption, which will seriously damage his chances.

There are also a couple of candidates who are still eligible from last year, specifically Fradique de Menezes of São Tomé and Principe and Ahmed Abdallah Mohamed Sambi of the Comoros. Both are viable contenders, but are either truly exceptional? Menezes was let down by his highly personal leadership style, while Sambi – despite being the first leader of the Comoros to assume power peacefully – failed to do much about the island’s miserable economic situation.

The pickings are slim. Although they may spring a surprise, the smart money is on the Prize Committee failing to award the Ibrahim Prize for the third year in its six-year history.

But that’s OK – at least the Foundation has awarded something to somebody this year. And even if it is a PR exercise, I can’t object to anything that gives the Arch an extra $1 million to put real money where his mouth is. DM

Before I was rescued from the dark side by the Daily Maverick, I worked in the communications department of the Mo Ibrahim Foundation. I was paid to say nice things about them and make others think nice things about them. It wasn’t exactly a difficult job: no one is against good governance in Africa (except, occasionally, governments), and I believe in most of what the Foundation stands for. There are a few things that I would like to change – for example, I wish they would move their headquarters from London to somewhere on the African continent – but for the most part the work they do, particularly behind the scenes, is very effective.