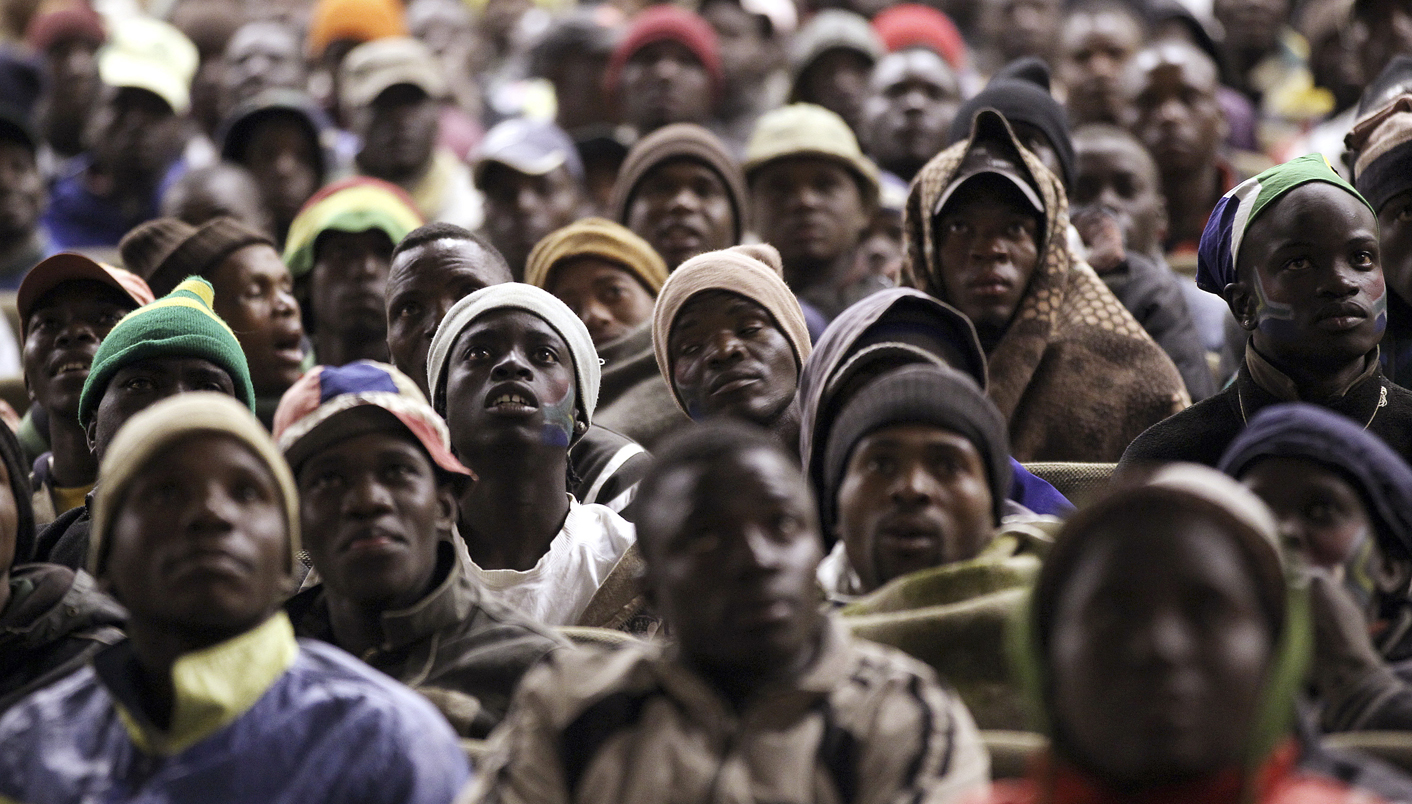 The Durban High Court ruled the municipality was responsible for finding permanent accommodation for shack dwellers after transferring them to a transit camp in 2009. But even as the court ruling was welcomed, activists and residents now fear the ANC or sympathisers of local government will avenge the ruling with violence. It’s happened before. By KHADIJA PATEL.

Up, down and around the darkened hills of Clare Estate in Durban we drove. We weren’t exactly sure where we were, but with our trust fully invested into a loaned GPS navigator, we were confident that we were travelling from the University of KwaZulu-Natal Westville Campus back to the city centre. But even as we drove for 10 minutes, navigating hill after hill, the roads growing narrower and shack settlements spilling out in front of us, we trusted in GPS. My friend Ayesha was certainly not new to physical reminders of South African inequality. After all, she’d worked as a doctor at Chris Hani Baragwanath in Soweto and the Tygerberg Hospital in Mitchells Plain, commuting daily between privilege and struggle.

But as she steered the car gingerly, she remarked at how much more “in your face” the shack settlements in Durban seemed to be. It was a few minutes more, with no main roads or highways in sight, that we realised that we were not in fact headed into Durban but were instead being directed to the home of the owner of the GPS system in Clare Estate.

But even as we chuckled at our own blind dependency on technology and braced ourselves for more winding roads and missed turns that sternly tested my friend’s clutch control, we looked with a tourist’s fascination at this side of Durban, so vastly different to the sandy beaches and luxury hotels we grew up knowing the city for.

It’s not as though the juxtaposition of elites and indigent was new to us. We knew too well that 10% of the South African population live in informal settlements, shanty towns, squatter camps. They are communities forced into the margins of formal society, whatever you prefer to call them.

To Durbanites there is something special about this area of the city, where you can look down from the hilltops. It was too dark for us to judge for ourselves, but views of the city aside, it was also here in one of the eight shack settlements in Clare Estate that Abahlali baseMjondolo (isiZulu for “people of the shacks”), the shack dwellers’ movement, was established in 2005.

In the Kennedy Road settlement, between Africa’s biggest garbage dump and Clare Estate, a fiercely democratic movement took root to contest the evictions of shack dwellers to make way for property developers.

And just days ahead of our excursion to the lush green hills teeming with people and shacks, Abahlali had won an important battle against the local government. The Durban High Court ordered the eThekwini Municipality to provide houses to 37 families of Richmond Farm Transit Camp in KwaMashu. The families had been evicted from the Siyanda informal settlement in March 2009 to make way for the construction of a road, and one of the conditions of the eviction order was that eThekwini Municipality would provide the families with permanent housing within a year. These 37 families were left out.

The court slapped a three-month deadline to the judgment, warning that municipal office-bearers must ensure that the municipality provides the housing due the families for the last two-and-a-half-years or be held in contempt of court. The threat of a fine or jail time now looms for eThekwini mayor and his aides.

But even as Abahlali joined the Socio-Economic Rights Institute (SERI), which represented the shack dwellers in court, in celebrating the judgment, Abahlali was immediately wary. It fears the court victory may come at the cost of further antagonising the local government and branches of the ANC.

In a statement Bandile Mdlalose, general secretary of Abahlali said, ”While we celebrate this victory, Abahlali are worried that we may be attacked and receive death threats, as happened after the Constitutional Court victory against the KZN Slums Act when Kennedy Road was attacked leaving two people dead in September 2009.”

In September 2009, residents of the Kennedy Road settlement and their families were attacked by an armed gang. They believe were targeted because of their association with Abahlali and with the Kennedy Road Development Committee (KRDC), a local community-based organisation.  Over a period of several hours on two nights, they were sought out and intimidated into leaving the informal settlement. Their homes were destroyed and their possessions were stolen. They were rendered homeless and destitute. Abahlali is confident it was the ANC who was behind these attacks.

Abahlali was proving to be too much trouble, its opposition to government too strong and its court victory a potential subversion of the thrust of power in the country. Or so it believed.

Three years on, the memory of those attacks continues to haunt the organisation.

Last Friday, members of Abahlali picketed outside a local police station, wary of having their request for a “public gathering” denied. They negated the need for formal permission for a protest, by assembling just 15 people to picket and then deliver a memorandum to the Sydenham police.

In the meantime, SERI has launched legal action against the police, alleging they refused to come to the aid of shack dwellers in 2009 and when they did arrive, failed to protect them.

In Durban’s shack settlements residents embraced the new dispensation with an understanding that the rate of change would be slow. But in 2012, when instead of housing, water, electricity, refuse removal or sanitation, people are left to the mercy of the city’s bulldozers, we understand then that Marikana did not happen in a vacuum. Marikana, the anger of the miners, the role of the state and the police have a historical context in Kennedy Road. It’s all happened there: the feeling of being undermined by official representatives, an erosion of trust in the police and the long arm of ANC politics.

Nigel Gibson, in his book Fanonian Practices in South Africa, points out that when the Kennedy Road shack dwellers first barricaded roads in Durban with burning tyres and mattresses to protest evictions, “their demands were far from revolutionary”. He says, “They were the demands of loyal citizens making reasonable requests, borne of their citizenship, for inclusion in the ‘new South Africa’: for housing, safety, health care and political representation.”

Gibson notes as well that the success of Abahlali’s establishment from its beginnings in Kennedy Road to settlements across Durban, and then across the country, proves that their experience and frustrations are not unique. “It was the universality of the Kennedy Road shack dwellers’ experience and demands that was immediately understood and taken up by neighbouring settlements,” he says.

Abahlali have been called “neurotically democratic” – leaving even decisions on whether to allow filmmakers into settlements up to the collective. But much of their success is credited to giving voice to views on the ground, making people feel like they too matter.

Back at the hotel on the Golden Mile, the road gyrated to a concert on the beach celebrating South African heritage, or something appropriately nationalistic for a Heritage Day weekend. Inside the hotel, the foyer teemed with members of the South African Democratic Teachers Union. They seemed to be dressed for a party, a very noisy one and a world apart from the darkened roads that split shack settlement from the other settlements, better endowed with bricks, mortar and running water.  DM

Photo: Homeless people, who are guests at the Moreleta Dutch Reformed church, watch the 2010 World Cup Group A soccer match between South Africa and Uruguay at the church in the suburb of Pretoria June 16, 2010. Wrapped in large blankets, long coats and hats pulled low, some 2,000 homeless people streamed into a vast church in a wealthy suburb of Pretoria on Wednesday night to hear a spiritual message and watch Bafana Bafana in the World Cup. The guests at the church came from a nearby squatter camp, where small fires could be seen burning in the pitch black, to watch South Africa take on Uruguay, eat a hot meal and drink warm drinks on a bitterly cold night. REUTERS/Stefano Rellandini