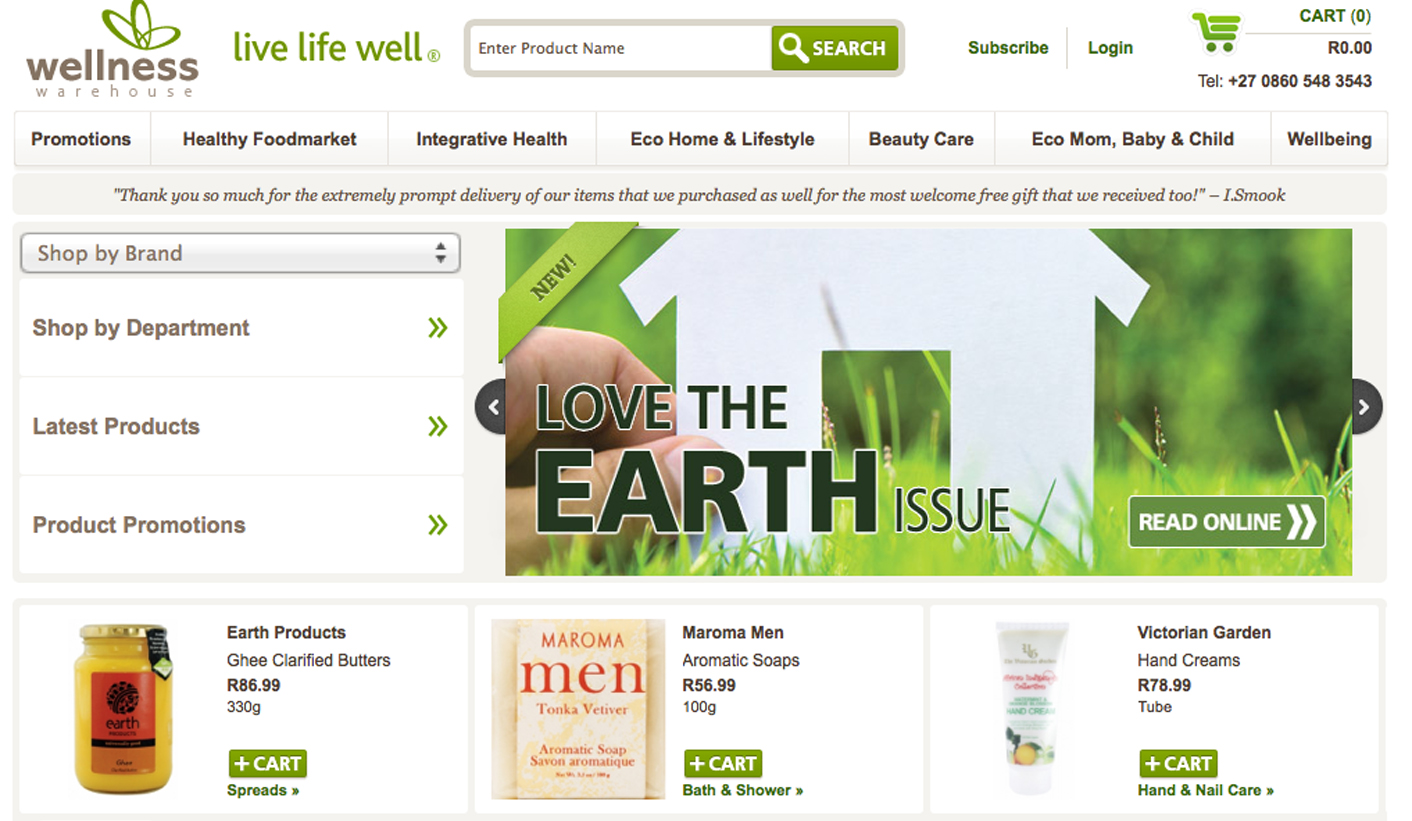 The Wellness Warehouse, an upmarket Cape Town-based “wellness” retailer (all-natural Mexican picalilli; R25 Ayurvedic incense; half a kilo of pea protein isolate for R75), has waded into the Israeli-Palestinian conflict by joining the boycott of an Israeli cosmetic line called AHAVA. Cue storm in a teacup (organic, of course), stirred up by the usual grimly committed players. By RICHARD POPLAK.

The Stolen Beauty website sports on its banner an image of a gorgeously coiffed model, alongside a significantly less-coiffed woman in a hijab. The model’s dead eyes stare into a photoshopped nothingness as she vogues with glistening red fingernails; the Muslim woman stares into what we assume must be a village laid to waste, twelve dead relatives, or whatever else television tells us that Muslim women stare at. In other words, Stolen Beauty immediately announces itself as a propaganda player in the Israeli-Palestinian conflict, and makes no bones about whose side it’s on.

The site is associated with an outfit called CodePink, created in 2002 to protest the Iraq war in particular, and American belligerence in general. CodePink is not just a women’s movement: “[W]e invite men to join us —but we are particularly eager to see mothers, grandmothers, sisters, and daughters, female workers, students, teachers, healers, artists, writers, singers, poets and all outraged women rise up and oppose the global militarism.” (They forgot to include soldiers, but perhaps I’m missing the point.)

Unsurprisingly, CodePink’s frilly crosshairs have been trained on Israel, which is something of a shorthand for global militarism in the “grassroots peace and social justice” universe. What does this have to do with a Cape Town-based wellness retailer, who has stores all along the mink and manure belt, and sells a baffling array of products that make one feel both spiritually enlightened and decidedly poorer?

An Israeli company called AHAVA (that’s Hebrew for “love”, but what else would it mean?) has been successfully and expensively turning Dead Sea mud into “a unique brand identity that is synonymous with the richness, purity and natural goodness that define this mineral-rich basin. Through our ongoing efforts, we have rightfully earned the reputation as the definitive Dead Sea cosmetic brand.” Indeed, AHAVA and the Dead Sea have become synonymous among the cohorts that smear Narcissus Tazetta Bulb on their faces; one of the Sex in the City gals is the company’s head shill.

According to the folks at CodePink, their affiliate Stolen Beauty, and a wide array of grassroots peace and justice organisations (some of which are South African), AHAVA isn’t really an Israeli company at all. It’s a company that operates illegally deep inside the West Bank, on two settlements that don’t meet international law, flouting the Geneva Conventions by not paying tax to, or operating under a license issued by, the Palestinian Authority. AHAVA Dead Sea Laboratories Ltd. is 44.69% owned by entities regarded as settlements: Kibbutz Mitzpe Shalem owns 37.31 %, and Kibbutz Kalia owns something over 7%. In short: Boycott this stuff.

This is nothing AHAVA hasn’t heard before, but the virulence directed against the company is building to such an extent that President and CEO Y. Ellis was forced to send out a letter that “set the record straight.” According to him, Mitzpe Shalem is indeed legal; the goop that goes into AHAVA’s products is mined from the Israeli end of the Dead Sea shore; and “the sovereignty over the West Bank has been in dispute for more than 60 years. It is expected that the future of the West Bank, and in particular of that part where Mitzpe Shalem is situated, will be finally decided as part of the negotiations between Israel and the Palestinians.” Until then, enjoy a signature mud-pack, and stay out of our way.

Which brings us, in a roundabout way, to the South African episode of the flap, which entered a critical stage over the weekend. In a joint media statement dated 30 September (and this is a SNAFU in which media statements, open letters and open emails are sent forth in industrial quantities) was released, signed off by Bruce Baigrie, UCT Palestine Solidarity Forum (UCT PSF): Zackie Achmat, Open Shuhada Street (OSS); and Muhammed Desai, Boycott, Divestment and Sanctions in South Africa (BDS South Africa). The gist? A triumphant statement of victory, concluding that the Wellness Warehouse’s discontinuing of AHAVA product is basically the first salvo in the final war against Zionism. “A successful protest over the weekend by UCT students and members of the South African human rights organization, Open Shuhada Street (OSS), has prompted the popular Cape Town retailer, Wellness Warehouse, to remove all cosmetic products manufactured by Israel’s AHAVA Cosmetics,” crowed the release.

Now, I know what you’re thinking, and it isn’t, “Shouldn’t these kids be playing Call of Duty IV and be having irresponsible, unprotected sex instead of milling around an organic store with pickets and slogan T-shirts?” No, you’re thinking, “My gosh, I didn’t realise that the cosmetics industry was so vital to the Zionist Entity’s GDP. This is indeed a crushing blow!”

AHAVA is a company with roughly $72 million a year in revenue. Israel’s main exports belong to the software and computer services industry, where creepy face recognition technology is sold to companies like Facebook for the price of ten AHAVAs. In other words, there is something else going on here, hinted at in the Stolen Beauty banner: this is an easy, emotional target. It’s the definitive storm in the teacup, and allows all of the players to prove to their constituents that they’re on the ball.

The South African Zionist Federation (SAZF), who are never far from a send button, have already weighed in on this issue. On August 25, they sent an email to their database, which screamed “Buy-cott” – AHAVA’s essential Dead Sea treatments are indeed essential to the cause. Should this one company tumble, what would stop the rest of Israel’s industry’s from falling under the relentless bulldozer of Anti-Zionist, and by extension anti-Israel and anti-Jewish, agendas?

That’s not a bad question, but it’s relatively moot considering the health of Israel’s economy, which is largely tethered to that of the United States, and is so high-tech and 3.0 that it is largely immune such nursery school bickering. But what of the call by BDS for the boycott of Israeli academics, a movement that is given real credence in European universities (and is all but ignored in the States.) The contention from Europe’s left-wing university communities: to be an Israeli academic is to ipso facto support the Occupation. And so it goes.

In truth, anti-Israel boycotts have been around for decades, and they’ve never really caught on in the mainstream, and are unlikely to. AHAVA has come in for a rough time of it because they’re lumped with the bad luck of having to market their product directly into the eye of the demographic that is most likely to boycott them: lefty granolas with money, and university kids. No way around that, but it’s by also by no means certain to be their undoing. No one can really tell what effect the boycotts have: even after the 2009 contretemps in Gaza, when Israel looked as bad as it ever has, the economy tailed off by about three percent. (Impossible, of course, to decouple that figure from the fact that the world economy was simultaneously tanking.)

Who is all this good for? The special interest groups making all the noise, of course. Anti-Israel boycotts will do nothing to change Israeli policy, and pro-Israel buy-cotts will do nothing much at all. The only casualty here – other than smooth, youthful skin – is measured discourse. But then, you knew that already. DM