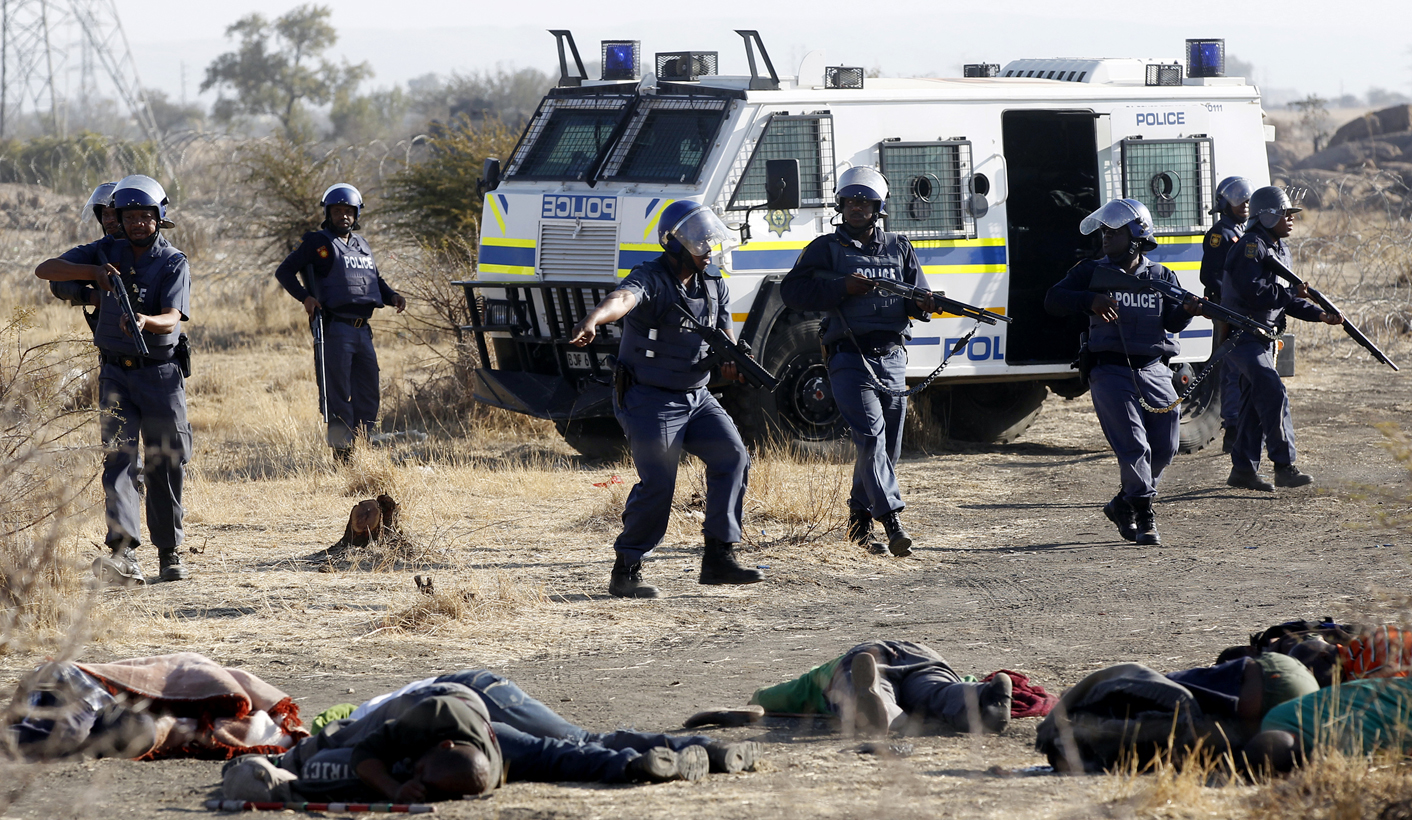 The Marikana judicial commission started on Monday in the absence of the deceased miners' family members. As the site inspection went ahead, it became obvious that the unpacking of the truth is going to be a monumental task. By KHADIJA PATEL.

Billed as the biggest judicial probe in South African history since the Truth and Reconciliation Commission, the Marikana judicial commission convened in Rustenburg on Monday. “Our country weeps because of the tragic loss, and this Commission will work expeditiously to ensure the truth is revealed,” retired Judge Ian Farlam told the hearing. But even as he assured the assembled audience of the Commission’s impartiality, he soon found out that it was not the credentials of the Commission itself that most imperilled the legitimacy of the Commission to establish the truth of the Marikana massacre. Any attempt to understand what exactly happened, and why, will need to mirror the complexity of the buildup to the strike.

Family members of the deceased were glaringly absent from proceedings as the names of the victims were read aloud on Monday morning.

“A roll call was taken and Judge Ian Farlam invited families to stand up as their loved one’s name was called, but no families were present. Nonetheless, the proceedings continued,” said Jackie Dugard, an attorney with the Socio-Economics Rights Institute (SERI), who is representing 20 of deceased miners’ families as well as the Association of Mineworkers and Construction Union.

Despite the gathering of media, advocates, witnesses, and observers, then, some of the most important role players were not present – a situation criticised sharply by Dugard.

“It is very upsetting that the families have apparently not been prioritised,” she said.

As much as the truth of Marikana is crucial to the trade unions, ANC politics, the government and the interests of big business, it is perhaps the relatives of the deceased that have the strongest need to know what happened during the strike.

Advocate Dumisa Ntsebenza told the Commission that SERI knew of some of families that were still not aware that an inquiry was underway. These families had no legal representation, and Ntsebenza implored the state and Lonmin to assist them.

“Of all the parties who are represented here, if any one party would be worthy of being assisted by the state, at taxpayers’ expense, they are the parties that have got to be assisted,” he said.

The anger that fuelled the strike in Marikana was to a great extent lent from a sentiment of exclusion. People felt left out of the decisions that governed their lives. To leave out their relatives in a process that sought to clarify why exactly they died would be a further indictment.

A request for a delay was first issued by Ntsebenza, who requested that proceedings be postponed for two weeks.

His request was seconded by attorney Dali Mpofu, who is acting on behalf of the 270 miners arrested and charged with murder and attempted murder in the aftermath of the violence.

“Consulting with 270 people can take quite a long time … if there is extra time, it would be welcomed on our part,” he said.

Representatives of the South African Police Services said they were not averse to a postponement. The extra time, they said, would afford them an opportunity to better prepare for the Commission.

Advocate George Bizos, acting for the Legal Resources Centre, was nonetheless adamant that the Commission had to continue. The cost of a postponement, he said, would be an unnecessary expenditure. And in the end, Farlam decided against a postponement, confident that in the day-and-a-half during which the Commission did site inspections would be sufficient to bus the relatives from the Eastern Cape to Rustenburg, in time for the next hearing.

“We were told after a tea break this morning that the Department of Social Development was making plans for families to attend. We hope this is the case. When we visited our clients late last week and over the weekend, none had been contacted by the Commission,” Dugard said.

Altogether it proved to be a disorganised, shaky start to the Commission, lending credence to fears that it had been convened too quickly to address adequately the many issues at hand.
Last week, human rights group Amnesty International noted, “The Commission is also under pressure to embark on its work at extremely short notice and to present its findings within four months.”
Despite these impediments, the pressure on the Commission to explain what happened in Marikana is immense. “This Commission must not fail,” Noel Kututwa, Amnesty International’s southern Africa director, said in a statement. “It is vital that it is empowered, properly resourced and given the time to do everything necessary to uncover exactly what happened in Marikana and help ensure these horrific events are not repeated.”

But even as a spokesperson for the commission expressed regret at the absence of the families, many still believe that it will be impossible to transport and accommodate representatives from all the victims’ families by Wednesday.

“We feel that it is essential that families are placed at the centre of the Inquiry and we understand that the Commission has substantial logistics-related resources: we hope some will be utilised to ensure families are present at least during the first few days of the Commission,” Dugard said.

It now remains to be seen if the Commission will go ahead on Wednesday if families of the deceased are still not present. Dugard for one is hopeful that Farlam will reassess his decision to postpone hearings for another week.

When the Commission does conclude site inspections, the first session is expected to focus on the events immediately preceding 16 August – the day of the shooting – with each party given an opportunity to present an overview of events from their point of view. The Commission has asked SAPS to provide an overview of events from the police’s perspective, and asked that the presentation include notes, photographs and plans with annotations. Members of the media were also requested to submit whatever footage they may have of the events leading to the shootings on 16 August.
But as residents from the nearby informal settlement approached the scene, singing struggle songs and chanting against Jacob Zuma, they carried placards that warned, “Don’t let the police get away with murder”.