In death as in life, Colonel Gaddafi wins the crazy pri...

In death as in life, Colonel Gaddafi wins the crazy prize 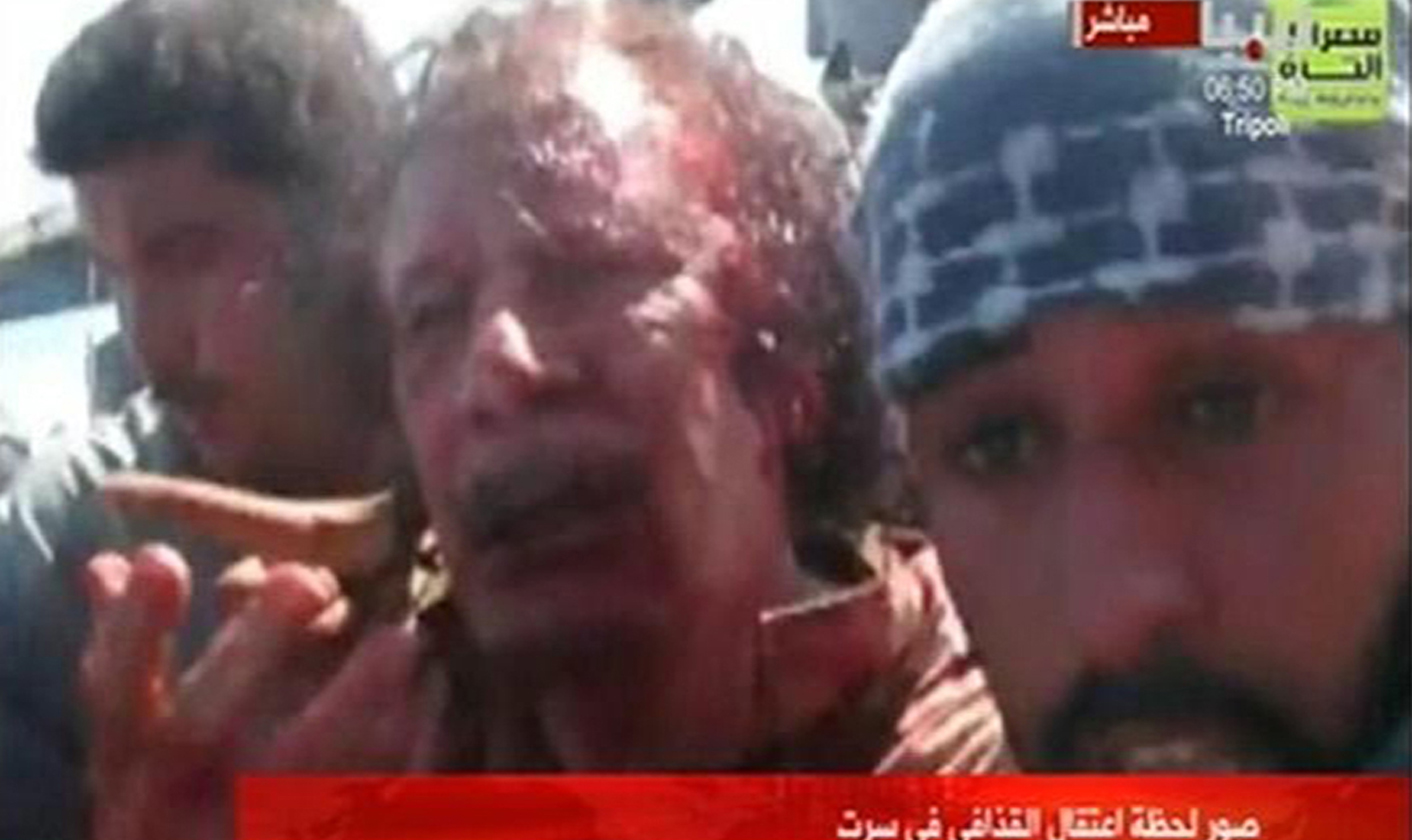 Always a larger-than-life character, it’s no surprise that even in death Muammar Gaddafi continues to make outrageous headlines. This time round the late Libyan leader is at the centre of a first-class political thriller starring a corrupt president, an untrustworthy Syrian and mysterious and deadly foreign agents. SIMON ALLISON tries and fails to separate fact from conspiracy.

First, a recap of what we thought we knew about Muammar Gaddafi’s last day: In October last year, the strongman who had ruled Libya for almost four decades was holed up in his hometown of Sirte, having lost the support of his people and control of his country. He was protected by the remnants of his once-mighty army, but the city was surrounded by hostile militias and everyone knew it was only a matter of time before they came for him. His options were limited to that most primal of binary dilemmas: fight or flight.

He chose the latter. On 20 October, a convoy of vehicles with Gaddafi on board tried to race out of Sirte and into the desert wilderness, aiming to get across the border and into a potentially friendly country: Chad, perhaps, or Niger. Gaddafi didn’t make it very far, however. On the outskirts of Sirte, the convoy was bombed by French warplanes and an American drone. An injured Gaddafi stumbled out of his vehicle and sought refuge under some nearby concrete drainage pipes.

It was here that he was found by the chasing rebel militia, which beat the crap out of him (and filmed it on their smartphones. There’s an app for that). Shortly afterward, Gaddafi died – either from the beatings, his injuries or a combination of both. His body was subsequently displayed proudly in a meat locker in Misrata, a cathartic moment for a Libya that needed to forget the past and move ahead with its difficult but exciting future.

Not so fast. Gaddafi’s messy and unplanned death was not the catharsis some people wanted, and the confusion surrounding his final moments left some people with more questions than answers.

Of these, the most frequently heard is the most obvious: how do we know it was really him? Sure, it looked like him, but then dictators are renowned for employing body doubles, both for security reasons and to handle the more mundane responsibilities of dictatorship. Still, it seems unlikely that a Gaddafi double would not have vigorously protested his innocence in the face of the angry mob, and there’s no evidence of this on the video footage. Moreover, the International Criminal Court refused to withdraw their arrest warrant against Gaddafi until they had seen forensic proof that the body was his; although the relevant documents were kept confidential, the warrant was withdrawn on 22 November 2011.

Questions also surrounded the timing and make-up of Gaddafi’s convoy, with some reports suggesting a strange South African connection. As the Daily Maverick wrote at the time:

“The reports are confused and contradictory. Apparently, a small force of South African mercenaries was recruited in the last days of the Libyan revolution with one goal in mind: to get Gaddafi out of Libya.” According to this story, these mercenaries were flown into Libya with Nato permission. They were told that the international community wanted Gaddafi out of Libya because they thought it would calm the fighting. In fact, according to one of the mercenaries who claimed to have been involved, it was a set-up; Nato just used them to flush Gaddafi out of his hole so he could be killed.

Now, nearly a year later, another theory is doing the rounds – and it’s even more scandalous. This time, it’s French President Nicolas Sarkozy who is the villain of the piece. In a last-ditch attempt to save his presidency, Gaddafi allegedly told Sarkozy that he would spill the beans about the millions of dollars that Libya had generously donated to Sarkozy’s re-election campaign. Sarko wasn’t happy.

“French spies operating in Sirte, Gaddafi’s last refuge, were able to set a trap for the Libyan dictator after obtaining his satellite telephone number from the Syrian government, they said,” reported the Daily Telegraph in a story that has sent shockwaves through France and the Middle East. “In what would amount to an extraordinary betrayal of one Middle East strongman by another, President Bashar al-Assad sold out his fellow tyrant in an act of self-preservation, a former senior intelligence official in Tripoli told the Daily Telegraph.” Bashir provided the number in return for an easing of political pressure on his embattled regime.

Armed with this information, a French secret serviceman was able to fire the bullet which eventually killed Gaddafi. This claim was seemingly backed up by Libya’s former interim prime minister, Mahmoud Jibril, who told an Egyptian television station that “it was a foreign agent who mixed with the revolutionary brigades to kill Gaddafi.” Italian newspaper Corriere della Sera cited diplomatic sources who echoed Jibril, adding that the assassin was thought to be French.

A betrayal, an assassination, global geopolitics and ruthless spies – this version of events would make a wonderful political thriller (Sacha Baron Cohen as Gaddafi, anyone? He’s almost done it before. As history, however, it should be filed under “diplomatic gossip” until journalists can dig up more than hearsay and anonymous sources.

It’s almost a pity; a crazy story like this would be a fitting end for a man who, despite and because of his many grievous faults, was always larger than life. DM

Photo: Former Libyan leader Muammar Gaddafi, covered in blood, is pulled from  a truck by NTC fighters in Sirte in this still image taken from video footage October 20, 2011. REUTERS/Libyan TV via Reuters TV