SA media gets a shot of Mampoer 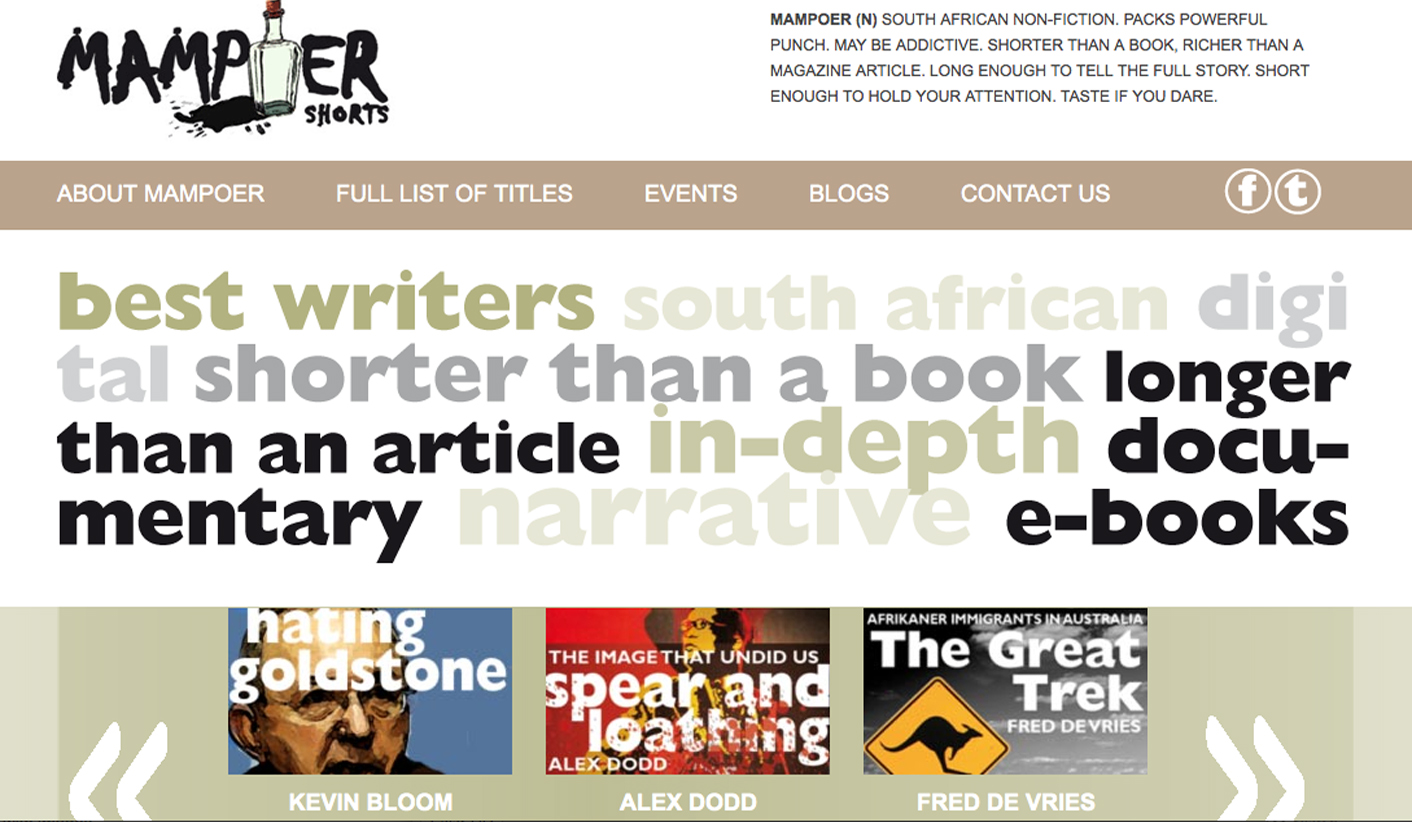 Some big names in South African media have come together to create mampoer.co.za, a website designed to amend the dearth of long-form journalism in this country. In an era where 140 characters are seen as adequate commentary, they’re selling articles of up to 15,000 words. Can it work? By REBECCA DAVIS.

Anton Harber and Irwin Manoim are unlikely to be discouraged by those who say their latest venture can’t possibly succeed. After all, they are the same pair who, in the midst of Apartheid in 1985, took the extraordinary step of founding the Weekly Mail, a newspaper that actually dared to tell the truth. Today the Weekly Mail is the Mail & Guardian, and Harber and Manoim have moved on to new challenges. Now they are attempting a no less tricky feat: to get South Africans to read very long pieces of journalism.

There is no doubt that South Africa is short on long-form journalism. The recently-launched SA edition of Rolling Stone magazine is one of the few publications which carries longer pieces. (The Daily Maverick’s writers have sometimes been accused of going on a bit, too.) But what Harber and Manoim’s Mampoer team is gambling is that an appetite for long articles does exist, and is not being fulfilled. They are gambling, too, that people are willing to pay.

Harber, Manoim and respected non-fiction writer Antony Altbeker are the brains behind Mampoer, together with former Exclusive Books CEO Fred Withers and Big Media MD Noko Makgato. Harber explained to the Daily Maverick that what they are attempting is indeed an innovation in this country. “South Africa has never been able to sustain a serious quality magazine like The New Yorker or Atlantic Monthly, but electronic publishing now makes it possible.”

While the idea is novel in South Africa, digital platforms devoted to long form journalism are flourishing internationally, with websites like Longform.org and LongReads.com winning dedicated audiences. In a recent interview with journalism.co.uk, Lucia Adams, The Times’ digital development editor, credited the rise of the format partly to the way people consume news on tablet devices.

“The iPad has been a real revolution for publishers and readers because it recreates that newspaper-like experience…so the iPad has given longer pieces a new lease of life,” she said, suggesting that people are also more likely to read longer pieces on smartphones because they often find themselves with time to kill.

“I think this idea that we have in the backs of our minds that long-form journalism is only for lazy Sundays when you can lean back in an armchair, that’s just not the way peoples’ lives work,” she said. Adams also suggested that Twitter is not the enemy of long-form journalism, but actively supports it, “precisely because it’s a place where you can discover interesting things”.

Both Longform.org and LongReads.com merely curate long articles which were initially published elsewhere. As such, they don’t charge for content. In its model, then, Mampoer is more similar to a website like Byliner.com, which sells individual pieces of fiction and non-fiction ranging in length from 5,000 to 30,000 words. Mampoer offers non-fiction pieces between 5,000 and 15,000 words, which it calls “mini-books: Short enough to read in a sitting, long enough to tell the whole story. Shorter than a novel, longer than a magazine article.” The pieces are priced at $2.99 each.

What leads them to believe there is an appetite for paid-for long-form journalism in this country? “Amidst the mass of undifferentiated information we are bombarded with all the time, there is growing need for someone to select and offer quality and depth on subjects important to peoples’ lives,” Harber said. “Few people have time for books, so I think we are going for the perfect length.”

To get the ball rolling, the Mampoer team commissioned some big-name writers to produce initial pieces. Kevin Bloom and Richard Poplak (both of whom write for the Daily Maverick) are in the catalogue, as are Jonny Steinberg, Mandy Wiener and Jacob Dlamini. As a sample of their content, I read three of their currently-offered pieces: Fred de Vries’ The Great Trek (about Afrikaner immigrants in Australia); Wiener’s Number 5 (a profile of Police Commissioner Riah Phiyega and the challenges facing the SAPS); and Harber’s own Gorilla in the Room (a profile of Naspers CEO Koos Bekker).

I enjoyed all three, but then again I didn’t pay for them, so I can’t say whether that would have affected my response. The Bekker profile was perhaps a trifle hagiographic: at one point an unnamed source gushes “Koos and (wife) Karen are the perfect couple”. Wiener’s police piece featured some revealing interviews with police officers, though not much new about Phiyega herself. De Vries’ Great Trek was possibly the stand-out feature, offering really interesting insights into the mindset and lifestyle of Afrikaner expats in Australia. (Did you know, for instance, that the brains of expatriates take five years to reach normal serotonin levels after the move?)

These first pieces were commissioned, so the authors would have received a fee, but the proposed model for remunerating writers will work quite differently in future. Writers will receive 30% of the sales price of their stories, with the remaining 70% going to Mampoer. Payment to writers will be a case of “submitting pieces and crossing their fingers”, as the Mail & Guardian noted. With a retail price of $2.99, this means a writer would stand to make about R7.5 per story sold, with no guarantees as to how many would sell. A story would have to be purchased more than 140 times before a writer saw his or her first R1,000.

That seems pretty risky stuff, particularly considering the time and work which would go into a 10,000-word piece. Harber is adamant, however, that there is money to be made.

“The revenues for writers are potentially good,” he said. “If a writer can sell well, they will earn more than they can from this kind of writing in any other way in this country. Certainly more than from books, or magazines, or newspapers.”  That is, nonetheless, a pretty big “if”.

Mampoer argues there are other benefits to writers besides money, including editing services prior to publication (though on that note, I spotted minor errors in all three features I read) and the “halo effect” of being published alongside literary luminaries like Steinberg.

Another potential challenge to the revenue model is likely to be the issue of piracy, with one person buying the story and sharing it. When asked how they intend to counter this, Harber replied: “We have put an e-curse on the material, so that if people share it illegally they will be tormented by their conscience unto the third generation. And their teeth will rot.” Let’s hope that’s a sufficient deterrent.

Harber wants characteristic Mampoer writing to be “engaging, quality reading for one sitting. Great reportage, with a satisfying depth. All with a South African flavour.” Nonetheless, the fact that the pricing is in dollars indicates Mampoer may be hoping for a readership broader than South Africans. “I think some of our titles will have international appeal, yes,” said Harber. “Perhaps Kevin Bloom’s piece on Richard Goldstone, or Philippa Garson’s piece on bringing up a child with Crohn’s Disease, for example.”

The dominant response of media insiders to Mampoer’s launch seems to be enthusiasm tempered with pessimism: lovely idea, won’t work.

“It hasn’t a hope in hell,” one local writer told me. “South Africans can barely be bothered to read 300 word articles for free, let alone 10,000 word articles they have to pay for.” Such cynicism is depressing, but may not be accurate. The realm of digital commerce can be surprising, and there’s little doubt that the content Mampoer offers will be of the highest quality. For our part, we hope they succeed. DM