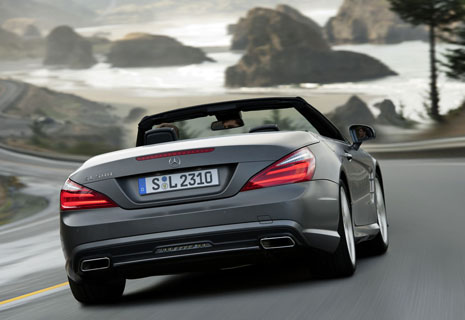 Sports cars are supposed to be lithe and wieldy, focussed on providing a swift, dynamic – and above all involving – motoring experience. But in an age of excess, hyperbole and supersizing, the sports car genre is no longer the purist expression of the performance art it used to be. The new Mercedes-Benz SL is a case in point, as DEON SCHOEMAN found out.

Given its sheer size and opulent interior, you’d be forgiven for believing that the new Mercedes-Benz SL’s designation is an abbreviation for Space and Luxury. But you’d be wrong.

In Mercedes-speak, the SL designation refers to Super Lightweight. It’s a description that goes back 60 years to the first SL, but it’s actually more relevant in the context of this latest version, despite its substantial dimensions.

And substantial this latest SL certainly is. Considering that it has seating for just two occupants, the newcomer’s key dimensions are unexpectedly generous.

A total length of 4.6 metres, a width of 1.9 metres and a wheelbase of 2.6 metres are stats more commonly associated with medium sedans. The measurements confirm that the new SL is longer and wider than the current C-Class, for instance, and not far off the proportions of the even larger E-class.

Some of that growth has been determined by factors outside Merc’s control, such as the demand from well-heeled customers for more interior space in the interests of comfort, the need for a more practical and generous boot and the fact that the smaller SLK (and the more exotic SLS) are arguably more performance-focussed alternatives from the same stable. But yes, it is a bigger car than its predecessor and as a result, it can look awkward from some angles. The upright grille looks almost too big for the rest of the car, and the rear can appear flabby from some angles. Get too close, and you lose the perspective of the overall shape, like looking at the car through a wide-angle lens. It’s a design that demands distance to communicate its balance and presence.

Thus, one could be forgiven for considering the latest SL as something of a wafter – a car that tips a hat to the brand’s compelling motorsport heritage, while also meeting the demand of a customer base more concerned with style and luxury than undiluted dynamics.

But don’t write off the SL as a poser’s machine. It might look a little lardy from the outside, but a twin-turbo V8 engine and a raft of advanced technologies ensure that the Merc responds with a level of alacrity quite at odds with its appearance.

Mention advanced technology, and we tend to think of cutting-edge electronics, new-generation engine design, or life-saving safety devices. The SL offers all of those – from blind spot, lane departure and driver fatigue warning systems, to intelligent cruise control, adaptive lighting and pre-emptive braking. But the technology that Mercedes is proudest of is a windscreen wiper system with integrated washing capability, and an audio system that delivers concert hall sound.

The former is called Magic Vision Control, and it supplies windscreen washer fluid via the wiper blade, rather than a conventional spray system, thus preventing the SL’s occupants from becoming drenched every time the washer system is operated with the roof down.

Then there’s the sound system, which cleverly uses apertures in the SL’s aluminium chassis to boost low-frequency response, even when driving topless, to ensure an immersive sonic experience – or so Mercedes claims.

As has become de rigueur for the brand’s roadsters, the roof is an all-metal affair (mainly aluminium and some magnesium, to be precise). It’s cleverly tucked away behind the seats at the push of a button, leaving between 364 and 504 litres of luggage space.

Top up or down, the cabin of the new SL is quieter than most drop-tops on the move, thanks in no small measure to a rear screen that prevents vortex-induced buffeting. And that does allow the sound system to be heard more clearly. But frankly, it’s the SL’s engine that plays the best tunes. The power plant under the bonnet of the SL500 (which, by the way, is the so-called base model in the South African range) is a muscular 4.6-litre V8, artificially aspirated by a brace of turbochargers. And when you prod it with the loud pedal, it responds with a delightful growl that soon grows into an angry roar as the revs rise.

It’s a sound that’s particularly enthralling with the tin-top stowed away, helped along by the twin pair of exhaust tailpipes emanating from the rear apron.

The stats show a maximum output of 320 kW at 5,250 rpm, combined with a stonking 700 Nm of torque, much of which is already on song at near idling speeds. That’s a lot of muscle, even considered against the SL’s rotund 1,785 kg kerb mass.

Cleverly, four of the eight cylinders can be shut down at cruising speeds, which has a substantial impact on fuel consumption and emissions: while the claimed 9.1 litres/100 km for the urban cycle proved highly optimistic, our test figure of just on 12 litres/100 km is hugely impressive.

I’m sure that SL buyers won’t care too much about the curtailed thirst of their steed. Instead, it’s the dynamic talents of the two-seater that matter most, and while it may be the biggest SL ever, it’s still very much a sports car. Much of the credit has to go to the light but rigid aluminium construction, which reduces unsprung mass and ups the power-to-weight ratio. In fact, despite its growth spurt, the new SL is around 170 kg lighter than its predecessor. The result is a big sports car with unexpectedly agile road manners.

The suspension’s adaptive damping manages to smooth out bumpy roads without compromising outright composure, while the steering’s apparent over-assistance at parking speeds is soon addressed as velocities increase.

Pushing hard through a series of corners, steering input becomes precise, and precisely actuated, with just enough load and weight to allow finely calibrated steering inputs, even under duress. Of course, those big 19-inch wheels and grippy tyres also help to toe the chosen line.

You’ll need to switch the stability control system at least partly off to allow for some slide and drift through corners – if not, it will intervene all too often, spoiling the fluid rhythm and the close rapport between car and driver that is so easily, intuitively established.

With a power to weight ratio of around 180 kW per ton, the SL500 has no problem living up to its sports car promise in straight-line terms. The two-seater will sprint from zero to 100 km/h in just 4.6 seconds, while an electronic nanny limits top speed to 250 km/h. However, it’s the midrange response that’s really impressive. Almost regardless of gear and prevailing speed, flooring the throttle evokes an immediate and irrevocable surge of acceleration. And while the seven-speed auto gearbox can be a little tardy, those opting for manual mode and using the shift paddles will soon find that swapping cogs is incisive and rapid.

With downsizing, improved efficiency and more frugal consumption among the key trends in the motor industry, the prognosis for a large and powerful two-seater sports car would appear to be less than favourable.

However, the SL proves that increased dimensions and a more generous interior can go hand in hand with reductions in weight, consumption and emissions while remaining true to its tradition of effortless performance and cosseting comfort.

Is this the best SL yet? That depends on your sports car expectations. Those seeking a compact, darty and even challenging machine might find the SL too capacious and too composed. And it’s true that SL buyers, in the main, are unlikely to explore the big two-seater’s full capabilities.

On a technological level, no SL has offered so much as far as advanced driving assistance and convenience systems are concerned. And ironically, its particular focus on lightweight construction through the almost exclusive use of aluminium brings the latest SL closer to its truly lightweight ancestor than its recent predecessors.

At R1.64-million, the SL500 isn’t cheap. But its overall appeal and prowess makes opting for the even more powerful and more expensive AMG 63 and AMG 65 versions unnecessary. And while the evocative SLS Roadster still commands the high ground in desirability terms, it’s debatable whether it really is rewarding enough to command its million rand-plus price premium.

SL or XL? Both, actually. This new SL is the biggest yet, but it’s also a true SL. And when technology, proficiency and dynamic prowess are brought into reckoning, this SL delivers a very persuasive sports car argument.

Pity, then, that it arrives in a time frame dominated by more telling trends. Rather than refining existing technologies and approaches, future sports cars need to seek dynamic solutions in the innovative spheres of electric and hybrid drivetrains, energy regeneration and cutting-edge aerodynamics.

Perhaps the next SL will deliver those solutions into the sports car mainstream? DM