Big Brother is watching you… and your gathering 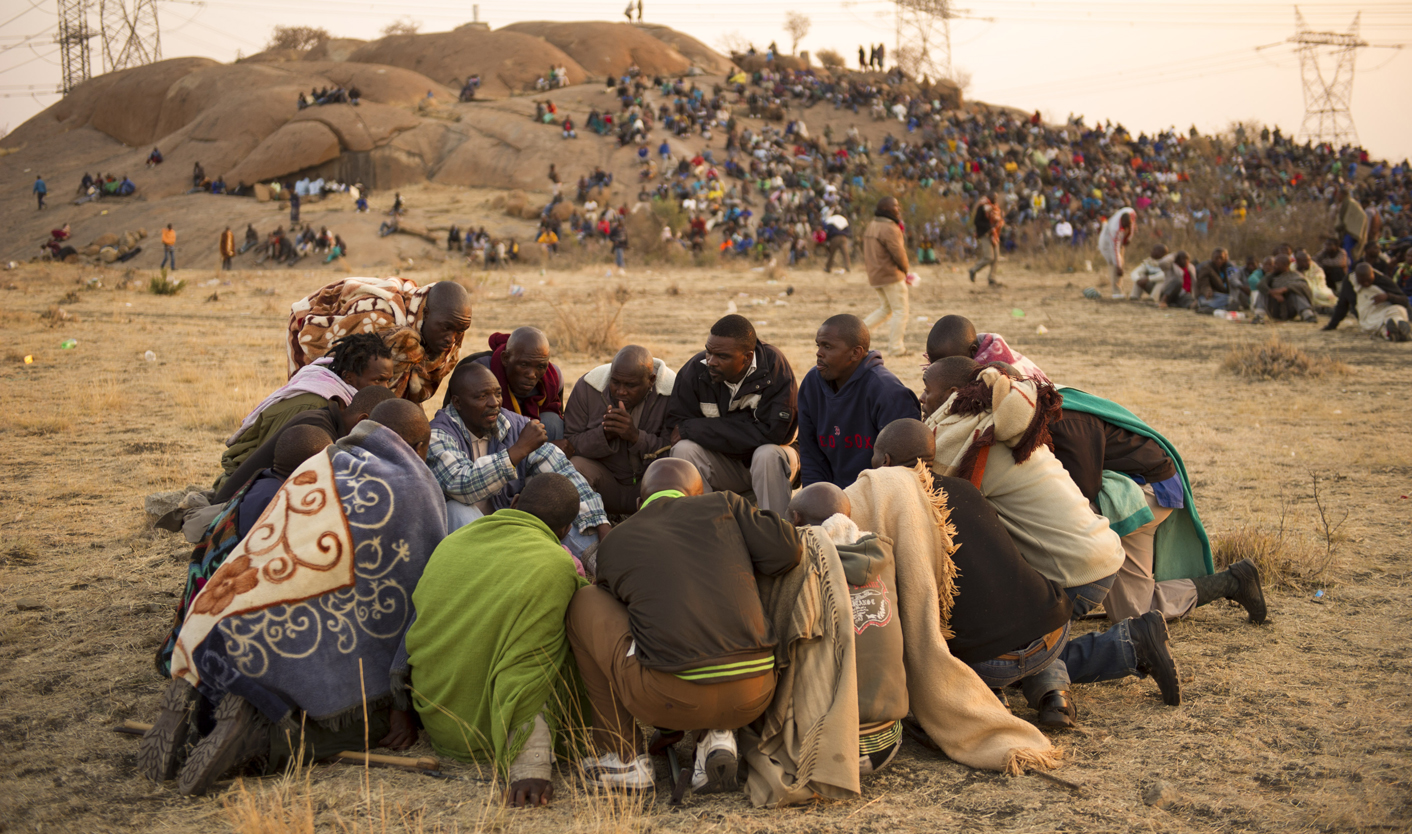 In recent weeks, the fundamental rights of South Africans to freedom of expression, assembly and demonstration have been brought into sharp focus through the implementation of the Regulation of Gatherings Act. By KHADIJA PATEL.

Some days before the crackdown on “illegal gatherings” and weapons in Marikana during the strike last month, colleagues and I watched wave after wave of striking mine workers, resolute in their demands and jubilant in their songs that eulogised the man in the green blanket, Amabubhesi. The town had been brought to a standstill as strikers marched back from one of Lonmin’s shafts to Wonderkop. As group after group passed through the town under the watchful eyes of a hefty police contingent, a colleague pointed out that the march was actually an illegal gathering. “If the police really wanted to, they could just arrest all these guys for illegal protests,” he volunteered.

We fell silent, watching the procession of people, anger and police in full riot gear.

“But then, they’d probably have to rope in the entire police force from Johannesburg and Pretoria if they even tried,” he said.

At that time, just two weeks after the massacre, a public display of police power that resulted in the deaths of 32 people, the prospect of enforcing the Public Gatherings Act there in Marikana felt far removed from what was actually happening before us. In itself, the suggestion sounded absurd.

But then a week later it happened.

The state brought Marikana to heel through the Regulation of Gatherings Act, a piece of legislation originally instituted to “normalise” the political landscape in preparation for the first democratic election in 1994. And yet even as it sought to regulate public protests, the Act for originally affirmed that citizens had a right to take part in demonstrations and protest marches, albeit after an elaborate procedure that required negotiations between authorities and the organisers of a march to ensure they would still keep the peace.

Mandla Seleoane, a researcher and lecturer at Tshwane University of Technology, has examined the Act in a chapter of the Freedom of Expression Institute’s new book, The Right to Dissent. He believes the Act imposes a number of conditions that, from a Constitutional point of view, may be problematic. “For instance, the Act seems to suggest that you require the permission of somebody to host a gathering in public, but in my view that permission is already granted by the Constitution,” he says.

Another pitfall of the Act, Seleoane believes, is that despite the elaborate negotiations between authorities and organisers, any member of the public who fears their safety may be compromised by the protest action is allowed to voice their opposition and thus stall the planned action altogether. “So the question then arises: why is the whole process of applications and negotiations with the authorities necessary when anybody from the public can stop [a protest] from happening?” he asks.

In Marikana, even after workers returned to work, authorities still withheld people’s right “to assemble, to demonstrate, to picket and to present petitions” by repeatedly denying applications for a women’s group to hold a protest. Only a late-night court application on Friday finally secured the go-ahead for the Saturday march.

The state – or the government, as the rest of us know it – appears to have developed a heightened sensitivity towards people exercising their right to dissent through assembly and demonstration. And as government recoils in apparent frustration against unrelenting waves of protest, the use of the law has forced a renewed probing of the relationship between the state, its forces and agents and the many South Africans who have something to shout about.

Since that crackdown in Marikana during the strike at Lonmin, the rights of South Africans to freedom of expression, assembly and demonstration have been brought sharply into focus. As my colleague Mandy de Waal pointed out, “The Marikana march isn’t the only protest action that’s been given the jack boot.”

The Right2Know Campaign marched on the Union Buildings in Pretoria last Friday, without the go-ahead from police, while in Germiston a planned protest against police brutality, inefficiency, corruption and involvement in politics by the Makause Community Development Forum in Ekuruleni against the management of the Primrose Police was also denied. And in Bhisho, a march by Ayanda Kota and the Unemployed Peoples Movement went ahead on 20 September, despite being banned by police.

It has become clear that the country is in the throes of a new struggle, with activists and social movements on one hand and the state on the other. The challenge, however, remains for concerted critical engagement with the Act, its place within the Constitution and the nature of protest in South Africa. Just as well, as there needs to be an engagement with the Act within the framework of the Constitution and the right of South Africans to protest peacefully. And the engagement should be inclusive: analysts have also pointed to the violence in the truck drivers’ strike last week as proof of a need for widespread education on the necessity of holding peaceful demonstrations.

Yet the manner in which the Regulations of Gatherings Act has been enforced in recent weeks has assisted government to restrict dissent in a fraught political environment. Even without the flurry of industrial action in the mining industry in recent months, South Africa has been billed the protest capital of the world. Service delivery protests, shack dwellers protesting evictions, protests by striking workers, et cetera, all have come to characterise life in South Africa in recent years.  Demonstrations, marches and public protests are a form of expression. And, as people grow restless, feeling cut off from the decision-making processes that govern them, these gatherings have become an integral expression of dissent.

Since then, however, increasing levels of poverty and social exclusion have fed an apparent opposition to the interests that prop up the status quo – and the government has once more turned to a law that was meant to safeguard the transformation, to keep the people in check, to quell dissent and protect the legitimacy of peaceful protest. Using the Act for its intended purpose, however, remains the biggest challenge. DM