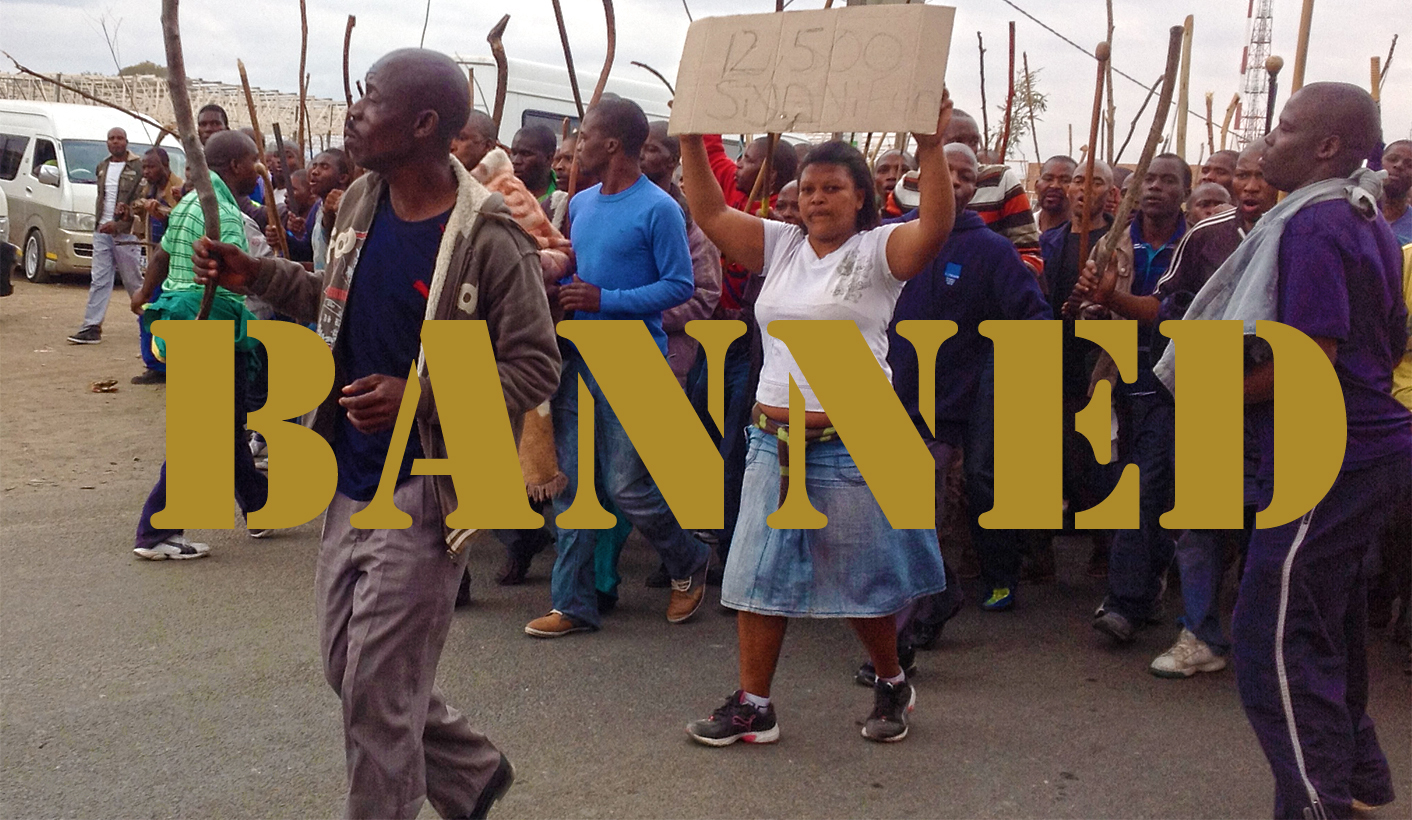 Using red tape, bureaucracy and good old fashioned municipal bungling, local governments from Rustenburg to Germiston, Pretoria to Durban and beyond are banning protest marches in the wake of civil action in Marikana. By MANDY DE WAAL.

Women from Marikana, near Rustenburg in the North West, have been trying to stage a legal protest march for close on two weeks now, following the 16 September death of Paulina Masuhlo. Masuhlo, an ANC PR councillor, was shot by police using rubber bullets during a raid on Nkaneng informal settlement in which residents dodged tear gas and police fire. Masuhlo died in hospital a few days later.

But it looks as if local authorities are doing everything in their power to ensure that people’s rights to “assemble, to demonstrate, to picket and to present petitions” as stipulated in Section 17 of the SA Constitution, as well as the Regulation of Gatherings Act, is quashed.

The Marikana march in protest of Masuhlo’s death and the occupation of the area by security forces is being organised by the Wonderkop Community Women’s Association (which includes woman from Nkaneng and the broader Marikana community) and the Women’s Support Initiative. This march was due to happen Saturday, 22 September, but police and local authorities put a stop to it saying the march was illegal. Organisers cancelled the march and immediately started applying for the necessary authority to stage the protest action on the following Saturday, but without success.

Marikana and Nkaneng are part of the Madibeng Municipality. After the first march was denied, organisers were told that the local government didn’t have the jurisdiction to rule on the demonstration and that they needed to approach the Rustenburg Municipality. However this information was only offered after many days of toing, froing and battling red tape. But it’s been a no-go from Rustenburg, which wrote to organisers saying the protest action “does not meet the requirement of the Gathering Act” together with a number of other objections the organisers say are not valid.

“It is completely absurd. The police and officials have acted outside the law and we find the reasons for their disallowing this march absurd and spurious,” said Sipho Mthathi, an activist and Marikana organiser. “They are saying that the purpose of the march doesn’t meet the requirements of the gatherings act, but there is no requirement of the gatherings act we haven’t met.”

Mthathi said the group was now seeking legal counsel, and chronicled a litany bureaucratic hurdles that organisers had to deal with to try get government permission for a march. “We launched papers with officials from the Madibeng municipality well ahead of our proposed march on the 22nd of September, but trying to find the person responsible for giving permission was impossible. After hours and hours of phone calls, our lawyers made the determination that we would launch the paper with everyone within the municipality.”

Earlier this week organisers were promised a meeting with police, traffic officials and local government by the Madibeng mayor’s office, but when organisers arrived for the meeting they were made to wait three hours for the relevant people to be assembled and the meeting to begin. “It was at this meeting that we were told that Madibeng was handing the matter over to the Rustenburg municipal authorities,” Mthathi said.

They fared little better at Rustenburg, and after a barrage of emails and calls another meeting was set up and the activists had to wait another handful of hours while the necessary authorities where gathered for the meeting. “There was a panel of seven people from the Rustenburg authorities and they included the police, intelligence and security officials. I literally had to beg the police to gather the relevant people so that the meeting could begin. During the meeting they raised the issue that businesses in Marikana had complained about disruptions. They said this is why they didn’t want the march to go ahead,” said Mthathi.

“However, the written documentation they have us doesn’t event reflect the verbal arguments offered. In the meeting they asked if the meeting was politically motivated, which has absolutely nothing to do with the Constitution or the regulating act that governs demonstrations and pickets,” she said.

The women have instructed their attorneys at the Centre for Applied Legal Studies to launch an urgent application in the High Court to overturn what they call the Rustenburg Municipality’s “unlawful decision”.

But the Marikana march isn’t the only protest action that’s been given the jack boot. The Right2Know Campaign will be marching to the Union Buildings in Pretoria on Friday, despite not getting the go ahead from police.

“Although we have made repeated attempts to engage meaningfully with the Tshwane Metro Police Department and the South African Police Service regarding the planning of this event, they have subjected our activists to delays, frustrations and hostile behaviour that threatened to derail the event,” a statement from Right2Know read.

The information freedom campaigners are marking “International Right to Know Day”. Voicing concerns they have with the government’s Secrecy Bill will be Dale McKinley a journalist, lecturer and one time Johannesburg chair of the South African Communist Party; Mashao Chauke of the Anti-Privatisation Forum; climate change campaigner Ferrial Adam, and Bishop Paul Verryn.

In Germiston, on Gauteng’s East Rand, a planned march by the Makause Community Development Forum in Ekuruleni against the management of the Primrose Police was denied. The march, set for 5 October, was to protest against police brutality, inefficiency, corruption and involvement in politics.

In Durban, the Kennedy Road Displacees notified the Sydenham police of its intention to picket outside the station following alleged sustained attacks by police that activists say have resulted in injuries, two deaths, people being displaced and homes being destroyed. Picketing was due to start on Friday, but activists were advised to seek permission from the Durban Metro Police despite this not being required in terms of the Gatherings Act for a picket of fewer than 15 people.

Finally, in Bhisho, a march by Ayanda Kota and the Unemployed Peoples Movement went ahead on 20 September, despite being banned by police. Kota was called by traffic police in Bhisho who informed him that “due to pressure from the legislature” the march was denied. A permit had been obtained for the protest action, but Bhisho police told Kota the march wouldn’t go ahead because he was “very arrogant” and because the demonstration was political. Kota said that the police threatened him before the protest began.

“Official attempts to put red tape in the way of organisations right to assemble, gather and picket is commonplace,” said Jane Duncan, Highway Africa Chair of Media and Information Society at Rhodes’ journalism school. “What makes the recent squashing or rights to assemble noteworthy is that it is happening in a context where these prohibitions are intensifying.

“There seems to be an intensification of attempts to prohibit gatherings on spurious grounds. Fears expressed by number of people close to the Marikana struggle that there is an undeclared state of emergency there. What is happening is bearing those fears out. The security cluster has made it clear they will clamp down on illegal protests, but are making it impossible for protest to happen. So protest will happen anyway and could lead to spiral of violence. This is a very dangerous moment for protestors in South Africa,” Duncan added.

Duncan said the government was creating the basis for a massive social explosion, and that scholars of social movement activism have shown time and again that when authorities act unjustly and attempt to suppress legitimate expressions of protest or anger, the suppression just made the struggle more intense.

“People recognise that the state is unjust, as the veneer of the state as a neutral player in balance of forces is being stripped away to expose the brute force of the state as a law enforcer of private capital. SA’s democracy has been exposed for the sham that it has become in a place like Marikana,” Duncan said.

And as Mangaung gets closer and closer, South Africa is increasingly in danger of becoming a de facto state of emergency as democracy gives way to military might. DM