The Lion, the Prez and the Airport 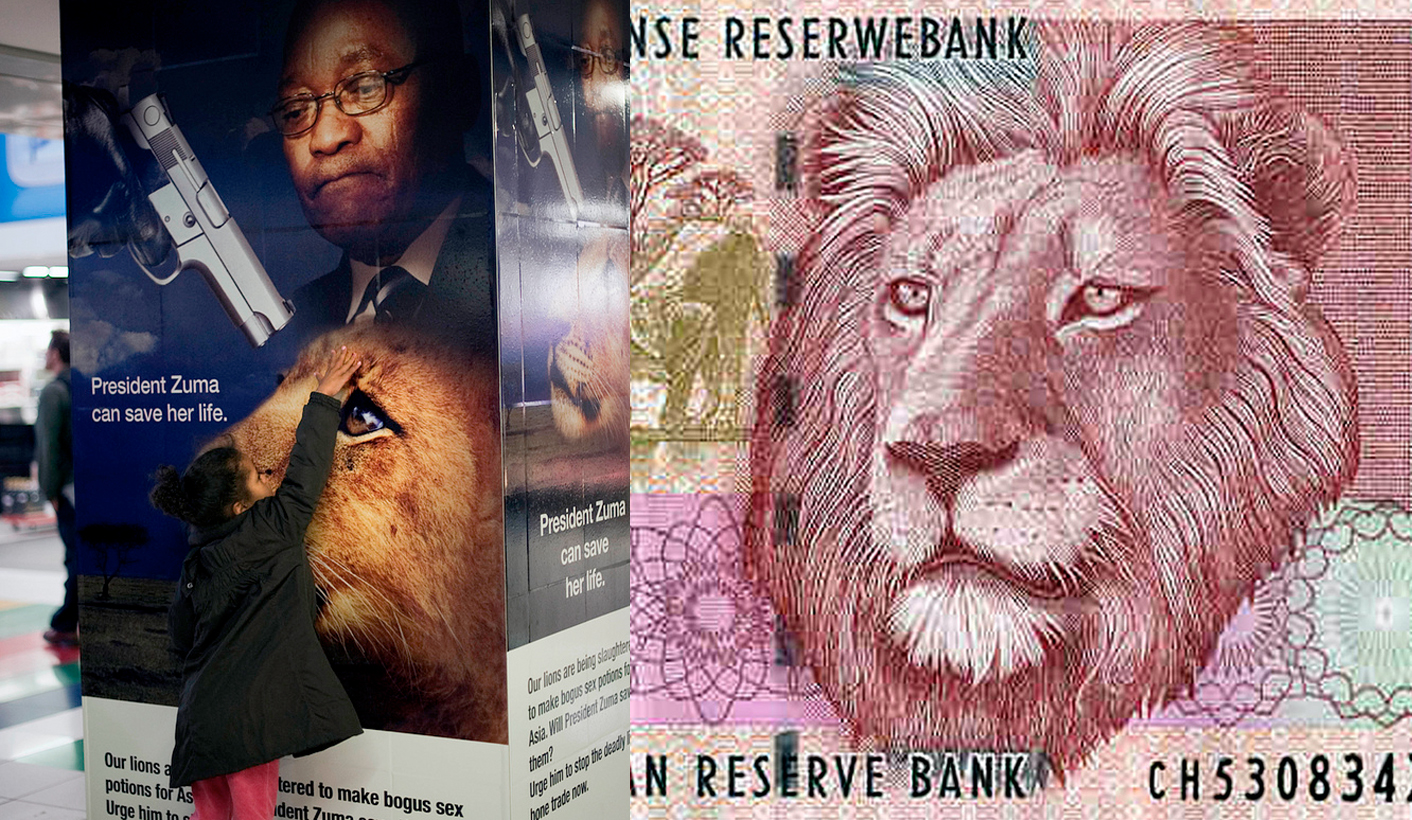 International lobby group Avaaz has announced that is taking legal action against ACSA and Primedia after the removal of advertisements featuring Jacob Zuma’s face from the international arrivals hall at OR Tambo airport. Avaaz argues that there is a freedom-of-expression issue at stake as well as a contractual obligation to display the ads. REBECCA DAVIS investigates.

The ads that caused all the trouble were certainly arresting.

Displayed on 10 columns, the ads featured President Jacob Zuma’s face superimposed above that of a lioness, while a gloved gunman holds a pistol to the animal’s head. “President Zuma can save her life”, the print said, and continued: “Our lions are being slaughtered to make bogus sex potions for Asia. Will President Zuma save them?? Urge him to stop the deadly lion bone trade now.”

“Avaaz,” which means “voice” in a number of different languages, launched in 2007 and now claims to have over 15.6 million members in 194 countries, making it “the largest-ever web-based campaign movement.” Of these members, more than 134,000 are in South Africa.

Part of Avaaz’s success is attributed to the fact that they make participation very easy. Are you outraged by the ongoing detention of South African Professor Cyril Karabus in Abu Dhabi on what his supporters say are bogus manslaughter charges? Avaaz has a petition for that, and for countless other social ills varying in magnitude. Sign it, and you’ve helped put pressure on the UAE to release Karabus.

That’s the theory, anyway. Avaaz has also been slammed for encouraging “slacktivism”, where people begin to believe that a Facebook “like” or a change of Twitter avatar can on their own effect social change. Writing for The Guardian in August 2010, activist Micah White suggested that “the trouble is that this model of activism uncritically embraces the ideology of marketing. It accepts that the tactics of advertising and market research used to sell toilet paper can also build social movements…They are the Wal-Mart of activism: leveraging economies of scale, they colonise emergent political identities and silence underfunded radical voices.”

In July last year, Avaaz’s Executive Director Ricken Patel — who is half South African — said that this kind of argument was missing the point.

“It’s important to look beyond the technology,” he said. “You click when you go on iTunes or eBay, but nobody disputes that these sites have changed commerce.”

Supporters of groups like Avaaz also point to the real successes that have resulted from online activism on a range of issues. Avaaz played a major role in pushing for a full judicial inquiry into wrongdoings at News International, for instance; and it was Avaaz members who raised money to supply cameras to citizen journalists during the Arab Spring, so that images of protest could be disseminated throughout the world.

One of the South African issues Avaaz has been making a noise about is the lion bone trade emanating from South Africa. The group says that South African lion bone exports increased by 250 percent between 2009 and 2010, as a result of demand from parts of Asia where the bones are used to make medicines. South Africa is now the biggest exporter of lion bones in the world. In May this issue was raised in Parliament by the Democratic Alliance, but Environment Minister Edna Molewa said a moratorium against the trade could only be considered “if the activity is of a nature that may negatively impact on the survival of the species in the wild. The department does not consider the trade in lion bones as posing (such) a threat”.

Molewa holds this view this because most of the lion bones being exported come from “canned hunting” farms in South Africa rather than from the wild. Avaaz claims, however, that because of the price of lion bones – which apparently can reach thousands of dollars – wild lions may increasingly be targeted by poachers as well.

More than 700,000 people have signed an Avaaz petition calling on the South African government to ban the lion bone trade. In order to put further pressure on the government, letters were sent from Avaaz to various high-ranking officials, including Molewa and the Office of the Presidency. The third phase of Avaaz’s campaign was the installation of the ads at the airport.

To put up the ads Avaaz had to go through Primedia, who is responsible for managing advertising space at the airports on behalf of ACSA. Primedia approved the ads, and up they went – for only nine days. But when a journalist asked permission to photograph the ads on Aug. 14, ACSA decided that Primedia should remove the ads immediately. That was done without a reason being given to Avaaz and without giving Avaaz the chance to amend the ads or respond.

Avaaz campaign director Emma Ruby-Sachs told The Daily Maverick that legal action was their only option.

“When the government pulled down these ads they silenced the voices of over 700,000 people who care deeply about the future of South Africa’s lions,”she said. “Urgent government action is needed to stop the lion bone trade and save these majestic animals. To ensure that happens, we need the public debate about lion conservation, fuelled by these ads, to continue.”

In Avaaz’s legal application, seen by The Daily Maverick, the group says that ACSA wrote to them to inform them that it removed the advertisement on the basis solely of “verbal comments from members of the public” which “raised the possibility of the advertisement being objectionable.” The legal application also quotes ACSA’s spokesperson, Solomon Makgale, as saying that the ads were “controversial”.

The Daily Maverick asked Makgale how many “verbal comments from members of the public” ACSA received before they decided to withdraw the ad.

“However, our decision was not influenced by the number of complaints but the contents of the advertising campaign,” Makgale said.

Makgale also told The Daily Maverick by e-mail: “After due consideration, we found the campaign to be objectionable, which, in terms of our agreement with Primedia, enables us to permanently withdraw it.”

In the legal application, ACSA claims the advertisement is in breach of all sorts of clauses of the Advertising Standards Authority code. Among them, it claims that “the advertisement breaches clause 11 of Section II of the ASA Code in that it uses President Zuma’s name and picture without the President’s express prior permission”; and that the ad “makes unsubstantiated claims…specifically, that lions are being killed; that lion bones are being used to make bogus sex potions in Asia; and that President Zuma can prevent this trade and save the lions.”

Perhaps most tenuously, they also claim that “the portrayal of the lion in the advertisement is offensive”.

Part of Avaaz’s defence is that Primedia explicitly pre-approved the ad content. In their legal submission, Avaaz includes an email from a member of the Primedia Outdoor Sales team which reads: “I also spoke to my manager & he is ok with the artwork because it is only for 1 month.”

Primedia’s marketing director Peter Lindstrom refused to comment on the issue, saying it was a “legal matter.” However, an affidavit from Avaaz claims that Lindstrom said Primedia believed that the ad was not “over the line”, but that the media company was “under tremendous pressure” from ACSA to remove it.

Avaaz also says that the freedom of expression stipulation in the Bill of Rights cannot be outweighed by the ASA code, “which, although voluntarily binding on advertisers as a self-regulatory code, does not constitute legislation or a law of general application.”

The real reason for ACSA’s objection to the ad is more likely that given in a message to Avaaz by ACSA’s Tebogo Mekgoe: “No matter our personal views on the matter, there is an implicit message in the content of the advert that says the President (personally) is currently standing by while our lions are being killed and is thus complicit in the killings.

He also warned that the ad could “potentially be a public relations nightmare especially given that it is the entry point into South Africa.”

Avaaz’s response to this in their court papers is that “there is nothing in the advertisement that suggests personal complicity on the part of the President in the killing of lions. The inclusion of the President’s image indicates simply that he is the addressee of the petition, in his capacity as President of the Republic.”

Avaaz says furthermore that President Zuma does indeed have the power to ban the export of lion bones; and that “as a public-office bearer, the President should reasonably expect a high degree of publicity and to be the subject of, or featured in, debates about public policy.”

Constitutional law expert Nick Ferreira told The Daily Maverick that an organ of state like ACSA, which is majority government-owned, is bound by the Bill of Rights.

“Any decision by an organ of state to prohibit political speech on its platforms infringes the right to freedom of expression, and such a decision would have to be justified by powerful considerations such as an infringement of another right in the Bill of Rights,” he said.

Attorney Simon Delaney, former Director of the Freedom of Expression Institute Law Clinic, told The Daily Maverick that he believed Avaaz had “a reasonable chance” of succeeding in their application.

“Even if the President has been defamed — which I don’t believe — the usual defences would succeed apart from the fact that the advertisement is already in the public domain,” he said. “Obviously the State itself cannot be defamed. This is another regrettable example of a media player deferring to the President.”

Avaaz’s Ruby-Sachs said that the group is “confident” of their suggess. They demand the immediate re-instatement of the ads (for which they paid almost R200,000). For their part, ACSA isn’t backing down without a court order. DM