Apple, China, and the mounting violence of the profit margin 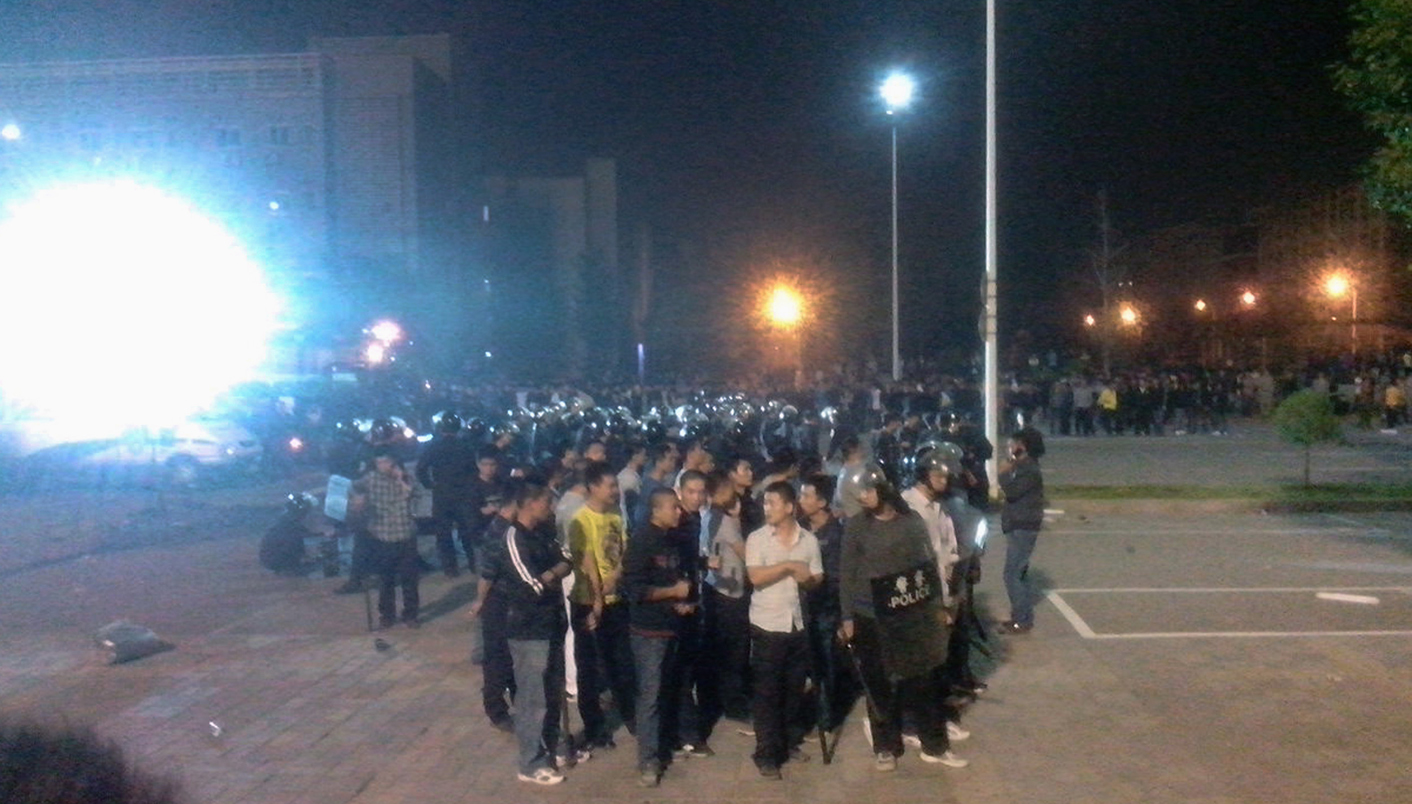 The protest on the weekend at one of its factories in northern China is leading some commentators to observe that Foxconn Technology may not be able to make good on the massive global demand for the iPhone 5. It’s a story that not only highlights social change in China, but the emptiness of America’s moral indignation. By KEVIN BLOOM.

The show purported to explore the brutalising effects of globalisation by focusing on the exploitation of workers in the Chinese factories that assemble Apple products. Excerpts of it were broadcast in January on the public radio programme This American Life, and garnered almost 900,000 downloads—making it the most popular episode in the slot’s illustrious history.

Problem was, one of those listeners was Marketplace’s China correspondent Rob Schmitz, who himself had done a lot of reporting on Apple’s supply chain in China. Schmitz was uncomfortable with some of the facts in Daisey’s broadcast, specifically the part where he spoke about a group of workers that were poisoned on an iPhone assembly line in Shenzhen. As far as the reporter was concerned, that incident happened in Suzhou, more than 1,500 kilometres away.

So Schmitz tracked down and spoke to Daisey’s Chinese interpreter, Li Guifen, who disputed a large chunk of what had been presented in the show. According to Li, two of the most dramatic moments in the theatre piece never happened: Daisy never met underage workers at the Foxconn factory in Shenzhen, and he never met a man whose hand was mangled while making iPads.

Of course, when that story broke, American media was awash with the sort of handwringing and self-recrimination that accompanied the outing of other journalistic fabulists such as Jayson Blair and Stephen Glass. The charge was that although Daisey did not identify himself as a journalist, he did intend for his audience to understand his narrative as an eyewitness account, and that he therefore needed to be judged by journalism’s standards.

But the damage had been done. Acclaimed China correspondent for The Atlantic, James Fallows, detailed the extent of it:

“When they get all huffy, Chinese nationalists love to present the Western press as being irremediably biased against Chinese achievements and ambitions, and willing to pass along the most outrageous slanders about China without checking them for accuracy or even plausibility. A site called Anti-CNN is a well-known outlet for such views. This is a constant nuisance when you try to write critical assessments. Worse, it gives ammo to those inside China who want to pooh-pooh complaints about safety, pollution, working conditions, and so on. Daisey is everything they warned against, come to life.”

What Fallows was saying was that while Daisey’s larger metaphorical point was correct—conditions in Apple’s Chinese supply chain do need to be held up to public scrutiny—he could have done everybody involved a huge favour if he had just called his own interpretation what it was: a metaphor. Instead, he egregiously stole the limelight from some important investigative work that was being done in the field, most notably a report released in March by the Fair Labour Association, which had been invited by Apple to look into allegations of abuse at Foxconn.

Starting in February, FLA assessors logged more than 3,000 staff hours inside Foxconn’s factories. They evaluated conditions based on visual observation and review of policies, procedures and documentation; interviewed hundreds of Foxconn workers and managers both on- and off-site; and conducted an anonymous worker perception survey of over 35,000 employees—all during peak production of Apple’s products. In their report, the FLA found excessive overtime and problems with overtime compensation, numerous health and safety risks, and key gaps in communication that led to a widespread sense of unsafe working conditions.

It was therefore not suprising that on Sept. 24, images and videos began to appear on Chinese social networking sites that showed overturned police cars, buildings with broken windows, and huge crowds of young people facing police squads in riot gear. The site of the disturbance was a factory run by Foxconn in the northern Chinese town of Taiyuan, and the alleged cause was an argument that erupted on Sunday night between workers and security guards.

According to the New York Times, the Taiwan-based Foxconn—which employs more than 1.1 million workers in China—wouldn’t comment on whether its Taiyuan plant makes products for Apple’s recently released iPhone 5. A company spokesman said only that the factory supplies goods to a range of electronics brands, although an employee confirmed that one of these brands was indeed the iPhone.

The Financial Times broke the story down into its core fiscal parts. Apple, the newspaper noted on Monday, is Foxconn’s largest customer, and by some estimates the iPhone 5 could make up a third of its profits for the second half of 2012.

“The company is the sole assembler for the iPhone 5 this year,” the report continued, “with 80-85 percent of shipments next year as well, according to analysts at Barclays. At an estimated $8 a phone, that workload brings in revenue, but has also put the company under strain. To handle Apple’s demands, Citi analysts estimate, [Foxconn] must increase headcount at its Zhengzhou iPhone factory from 150,000 workers in June to 250,000 in October.”

As this writer picked up anecdotally during a three-week research trip through China in September, labour dissatisfaction appears to be commensurate with the country’s burgeoning middle class, increasing perceptions of inequality, and the consequent demand of workers for higher wages. Where five years ago Chinese factories were turning down dozens and even hundreds of hopefuls for each slot, today those same factories are complaining about a labour shortage. Foxconn, the FT observes, has raised wages to keep workers on the shop floor, but in so doing has eroded its operating profit margins—from 5.4 percent when the first iPhone was launched in 2007, to 2.4 percent in 2011.

Given all of this, will Foxconn be able to meet the huge global demand for the iPhone 5? If not, what will be the knock-on effect and the broader implications for the Chinese economy? While it’s common knowledge that China intends to gradually shift its economic base from manufacturing to innovation, do the latest Foxconn riots suggest that the incoming Communist Party leadership will have to speed up the process?

These questions will necessarily be answered some time in 2013, and whatever the outcome, it’s certain to impact us all. In sub-Saharan Africa, a slowing Chinese economy means less demand for our resources, which means growth rates of 6 percent will be harder to sustain. In Europe and North America, where growth rates are still reeling following the 2008 financial crisis, a Chinese slowdown means diminished access to one of the world’s major sources of credit and capital.

In the face of such stakes, what’s needed is reporting from the West that’s both accurate and responsible, that acknowledges the challenges—in terms of labour conditions, the environment, human rights, etc—and yet respects Chinese culture and sovereignty. So, while he may have a valid case, we could all do with a little less of the self-serving pamphleteering that flows forth from the likes of Mike Daisey.

“Today, the Chinese working class is fighting,” the far-removed fabulist posted on his blog on Monday. “More than thirty years into the Communist Party’s project of market reform, China is undeniably the epicenter of global labour unrest. While there are no official statistics, it is certain that thousands, if not tens of thousands, of strikes take place each year.”

Mike Daisey, upon reading this piece, posted a tweet directed to the writer with these flattering words: “I can’t believe I have to read your sanctimony on journalism, and you can’t even seem to pass reading comprehension.” His complaint was that the last quote of the article was written by Eli Friedman, “a prominent professor on labour, and [that it was] just part of a long, excellent essay on China.”

The writer apologises for the oversight—it was not immediately clear to him that Daisey did not write these words, as there is no mention of Friedman anywhere in the blog post. There is, however, a live link behind the post’s header, which takes you to Jacobin magazine, where Friedman’s essay appears (and it is indeed excellent; see below).

The writer rejects Daisey’s assertion in an email to the DM’s editor that the attribution above “dismantles a lot of Mr. Levin’s conclusions”. He also rejects that his name is Dan Levin—the writer does not know such a person, nor, aside from in Daisey’s mail to the DM, has he ever been referred to as such.

Photo: Plainclothes and uniformed policemen assemble during a riot at a Foxconn factory in Taiyuan, Shanxi province on early morning of September 24, 2012. A Chinese factory owned by iPhone assembler Foxconn resumed production on Tuesday after a riot involving 2,000 workers had forced it to close for 24 hours, in an incident that put Chinese labour conditions back under the microscope. Picture taken September 24, 2012. REUTERS/Zhang Bo