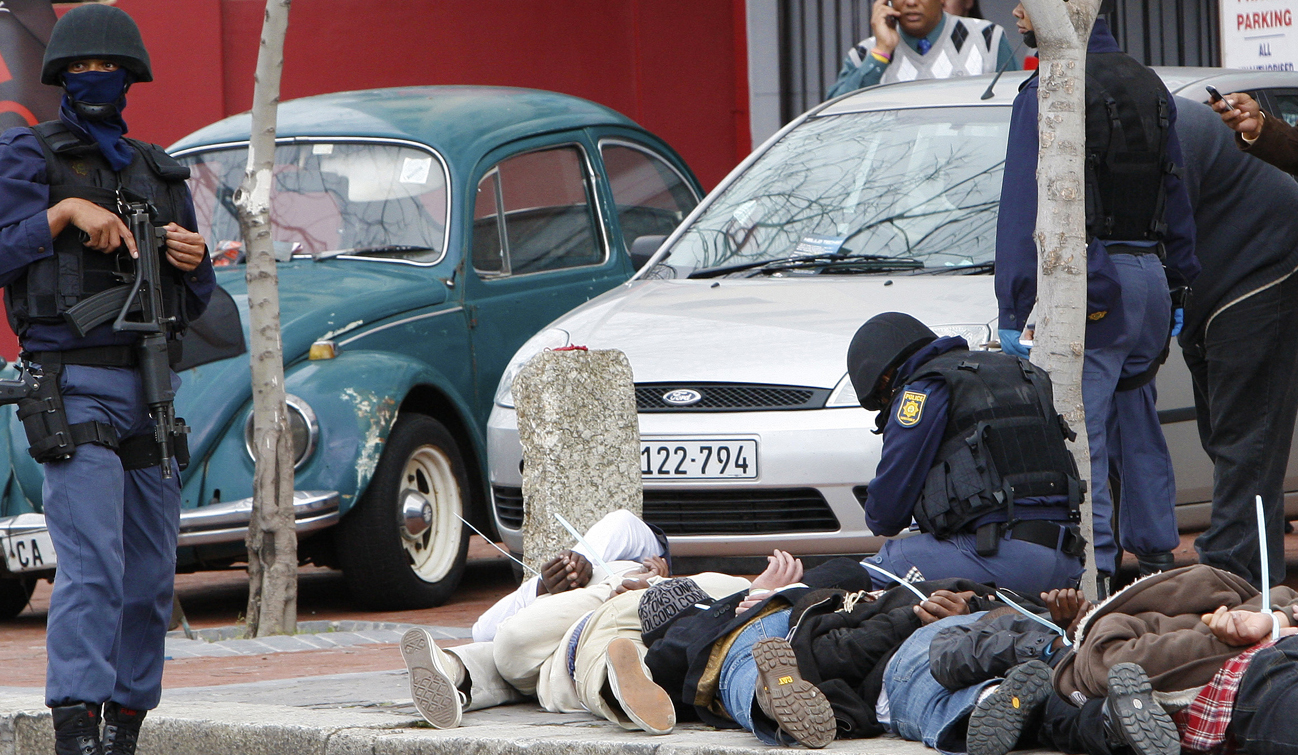 SAPS has just released crime statistics for the year ended April 2012. Improvements are small, and certain types of crime have increased. And the numbers themselves have come in for a bashing – they’re not audited, lump crimes together in mass categories and are months out of date. By REBECCA DAVIS.

The release of crime statistics in a country as crime-obsessed as South Africa is always greeted with a certain ghoulish fascination. We all know the line about lies, damn lies and statistics, but there’s a sense in which crime stats seem to offer a kind of barometer as to the country’s moral health. Unfortunately, the most recent crop of figures suggests we are still most unwell.

It’s not all bad. Report cases of “contact crime” – which is essentially any crime which involves a physical component – are down 3.5% from last year. Cash-in-transit heists and bank robberies are on the decrease; hijackings are down by 11.9%, as are residential robberies (albeit by a tiny margin – 1.9%). But the other side of the coin is that there are increases in crimes like robberies of businesses (up by 7.5%) and reports of drug-related crime have jumped by 15.6%. The effects of gangsterism were particularly evident in the stats for the Western Cape, where 13.1% of reported murders and 22.2% of attempted murders over 2011-2012 were gang-related. Drunk driving was up by 2.9%, with the country’s booziest motorists found in the Western Cape.

When it comes to the big-ticket crimes – murder and rape – the decrease has been marginal. Something interesting happened in this regard at the press briefing Thursday in Cape Town, where the police chiefs – Nathi Mthethwa, Riah Phiyega and Gauteng Police Commissioner Mzwandile Petros – interpreted the data for the media. They were asked three or four times by journalists to read aloud the raw figures for numbers of murders and rapes, and each time dodged doing so. After an increasing outcry from the gathered media, Petros eventually pulled up the PowerPoint slide giving the figures, but still flatly refused to speak the numbers out loud.

The reason for this might be their scale: 15,609 reported murders, 64,514 reported sexual offences. Here the percentages in which year-on-year differences are reported can serve an obscuring function. It is true that the murder rate reflects a 3.1% decrease from the previous year, but that sounds more impressive than when you consider the actual numbers: that in 2011-2012, only 331 fewer people were reported murdered. Forty-three murders a day, by anyone’s standards, cannot be considered a positive outcome.

With regards to sexual offences, the reduction here too is minimal: 3.7%. A shocking 40% of all reported sexual offences were committed against children: 25,862 children were reported sexually assaulted in some way, and this is certainly one area where you can be sure of massive under-reporting. Reported rape cases are down by a paltry 1.7% – and then there’s the problem that this drop may not be meaningful, or even positive, at all.

“The key word to be looking at here is ‘reported,’” the Women’s Legal Centre’s Sanja Bornman said. “We’re looking at reported incidents of sexual offences. We know from experience that these numbers cannot be trusted because of high levels of attrition – rapes not being reported, case numbers never being assigned, dockets lost and so on. The theory is that only one rape in nine is reported, though it’s impossible to know because obviously we can’t track it. So it’s difficult to be pleased about this kind of a decrease.”

There’s also the fact that even though sexual offences in general are down, sexual assault incidents have risen by 0.7%. But because rape is the only sexual crime which receives its own figures, we don’t know exactly what type of acts we are talking about. “It’s difficult to see what the holistic picture is, in terms of sexual offences across the board, when different offences are not disaggregated,” said Bornman. In particular, women’s rights advocates are angered by the subsuming of domestic violence under the category of common assault, with no way to tell what the rates are like.

Bornman also pointed out that the statistics would be far more helpful if they were paired with conviction rates. “Without that, they are not a very good indicator of how the system is actually responding to these various crimes. We’d like to know what percentage of victims actually made it into a court and successfully prosecuted their case.”

Many of the same points were made by the DA’s Shadow Police Minister Dianne Kohler-Barnard, who is certain that the categorising of crimes is done deliberately to obscure certain unpalatable truths. Citing the example of domestic violence, she told the Daily Maverick: “As soon as journalists and politicians start commenting on a certain type of crime, they simply hide it under another statistic.”

As another illustration, when a journalist in the press briefing asked for a breakdown of farm murders, Mthethwa replied that they never made this a separate category. “That was a categorical statement that was incorrect,” Kohler-Barnard said. “In fact, farm murders were in the annual report up until about four years ago. Obviously Mthethwa wasn’t the Police Minister at the time, so maybe he didn’t know that.”

Another of Kohler-Barnard’s quibbles is that SAPS stats are not independently audited. When pressed for details on this, Mthethwa refused to elaborate. “The Auditor-General could do it, or any acceptable auditing firm,” insisted Kohler-Barnard. “Without auditing, the manipulation of crime statistics happens every time.” She cited the case of the Mountain Rise Police Station in Pietermaritzburg, which in 2009 was found to be hiding and burning police dockets. Kohler-Barnard believes this kind of fraud may be more widespread.

SAPS has also been criticised for the lengthy delay before stats are released. Business Day’s Tim Cohen pointed out this week that police stats used to be released monthly. Things changed, he wrote, because “under former President Thabo Mbeki, politicians felt rising crime rates were being used as a stick to beat his administration. So the monthly statistics were scrapped, and a single, out-of-date revelation of the results was substituted.” Cohen quoted Institute of Security Studies (ISS) researcher Gareth Newham as saying that the time it takes to process these stats is certainly not a factor: because the SAPS has computerised reporting systems, it could technically release the results daily if it felt like it.

Kohler-Barnard said “the ideal is to have real-time crime statistics at each station. So you can go to your local police station and say, ‘Right, I’ve heard that there’s some housebreakings in this area,’ and they can tell you, ‘Yes, it’s a gang of five, they’ve been driving this car, and then you can watch out for that.’” More frequent crime reporting would put an end to what she termed “the annual circus of 18-month-old stats”, a situation she called “bizarre”.

Yet another criticism levelled at the crime stats is that they do not count at all several emerging categories of crime in South Africa. The ISS pointed out that crime types like corruption, group murders and political assassinations are all excluded from the reporting, as are levels of nuance like the degree to which xenophobia can be a contributing factor in crime.

At the media briefing, Petros said the guiding aim of the SAPS was to ensure that “all people in South Africa are and feel safe”. This certainly looks a long way off. According to a Stats SA report from 2010, 88.2% of South Africans feel safe walking the streets during the day, but at night that figure drops to just 37%. The two crimes most feared by South Africans are house robbery and housebreaking. When Mthethwa was asked whether he found the stats disappointing, he replied, “There will always be disappointment in the fight against crime, as long as people, from a perception point of view, don’t feel safe.”

After the events of the last two months, the SAPS could certainly use some decent PR. Unfortunately, these crime statistics are unlikely to do the trick. DM